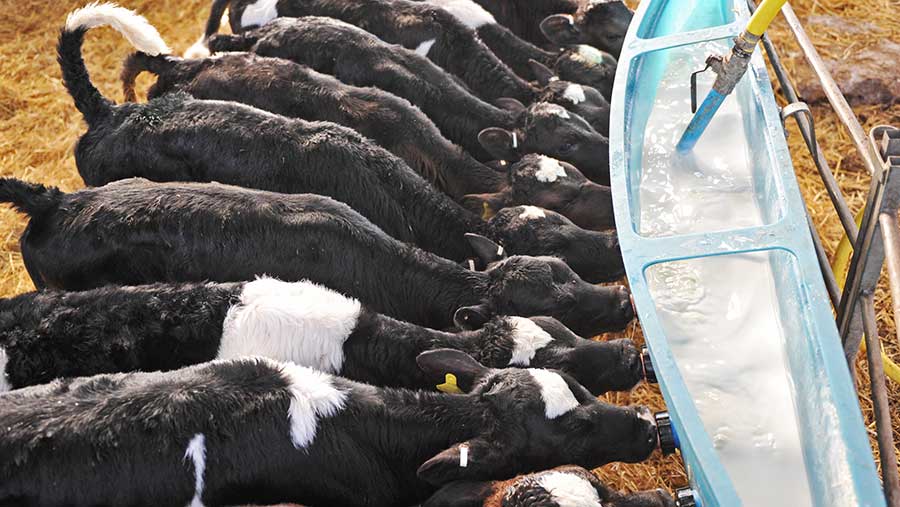 More than half of all dairy and beef farmers in Great Britain now rear their youngstock on calf milk replacer (CMR) instead of whole milk, with potential disease risks a reason for this shift to powder-based systems.

Research carried out by Volac, involving 644 farmers, revealed 58% of dairy calves and 52% of beef calves are reared on CMR compared with a combined average of just 15% 10 years ago.

Farm vet Dave Gilbert, who scrutinised the results for Volac, says a growing awareness of the risk of transmitting Johne’s disease to calves through whole milk is influencing the trend away from whole milk rearing systems.

“Ten years ago, I could count on one hand the number of farmers who were testing for Johne’s and managing and controlling it, but now it is the norm.”

Mr Gilbert, of Shropshire-based Dairy Insight, says the threat of antimicrobial resistance from feeding waste milk produced by cows treated with antibiotics is also a factor.

Volac, which manufactures 40,000t of whey-based CMR at its Felinfach plant, carried out a similar survey in 2007.

It found three out 10 farmers didn’t think there were risks associated with feeding whole milk.

“Farmers are now much more aware of what they are feeding and the effect that might have on calf health,” says Mr Gilbert.

He believes expansion in herd size is another underlying reason why more farmers now feed CMR.

“The dairy farmers I work with today are very different to those I dealt with in 2007; I am not saying there isn’t more scope for change, but the majority of clients are now much more efficient and switched on.”

What to look for when buying CMR

What still needs to change?

“Feeding healthy transition milk is a very different to the more traditional practice of feeding milk that is unsaleable.”

The survey showed overall ingredient quality in CMRs is a key feature for farmers.

As a result, Volac global product manager Niall Jaggan says Volac is becoming more transparent with the disclosure of the ingredients that go into making its milk replacers.

Farmers can find it difficult to assess milk replacer quality from the label on bags because manufacturers only disclose the legal minimum requirements, so the constituents usually listed on CMRs are crude protein, crude fat, crude fibre and ash. Commercial sensitivity is the main reason why manufacturers don’t disclose detailed specifications.

But Volac said its recent research showed farmers were keen to make choices based on overall ingredient quality, so in future it will list limiting amino acids such as lysine and leucine to help better inform buying decisions.

“For this market to progress we need to do a better job of informing our customers about the choices they make.”

Farm vet Dave Gilbert welcomed the move. “As a vet, it is tremendously difficult to help farmers when this information is not available when looking at specifications.

“In order to support farmers, we need more information on the nutrition side to help them to make educated choices. Dairy is decades behind pig and poultry nutrition on this.”