A state-of-the-art sheep husbandry unit costing £435,000 has been developed at Newton Rigg College, Penrith, Cumbria, demonstrating some of the newest technologies on the market.

These innovations help aid efficient sheep production and provide a modern, practical learning resource for the next generation of hill farmers. 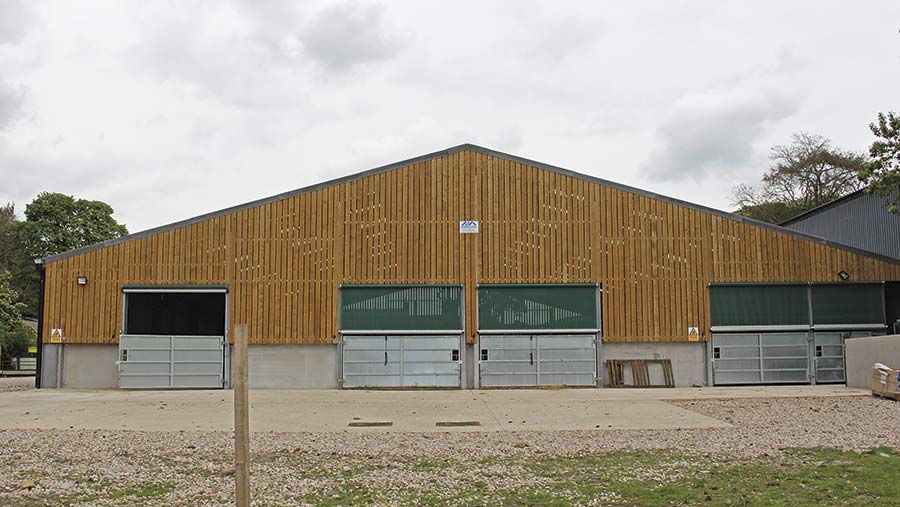 Why was a new sheep unit built at the college?

The aim is to be a national showcase for the best hill farming practices, and ensure the industry’s future workforce and leaders have the key skills they need.

The UK uplands are a vital part not only of our countryside and heritage, but of British agriculture and this initiative will help ensure the future viability of an important sector of farming.

Our vision is that Newton Rigg College will become the UK hub for training and education in uplands land management and sheep husbandry, which will not only benefit students but the UK hill farming industry as a whole.

How did you go about designing the unit?

When we decided to build a new unit we put together a local steering group of hill farmers, who have been involved in the design and concept.

In addition, we have been fortunate to have support from the Cumbria Local Enterprise Partnership.

The building had to be a single space that would be able to house sheep all year and be adaptable for all manner of tasks, but could also be used for other things such as storing fertiliser, straw, shearing and dipping.

It had to make life easier for the workers and be a place that can demonstrate a range of different technologies to the students, of which we have 130 full time and 170 agricultural apprentices.

How was it constructed?

The existing buildings were demolished and a steel portal framed building with Yorkshire boarding and a fibre cement roof was put up.

The building work and internal fitting was done by Robinsons Scotland and it took about 16 months to complete. We have worked with lots of different companies for the internal design.

How is the shed laid out? 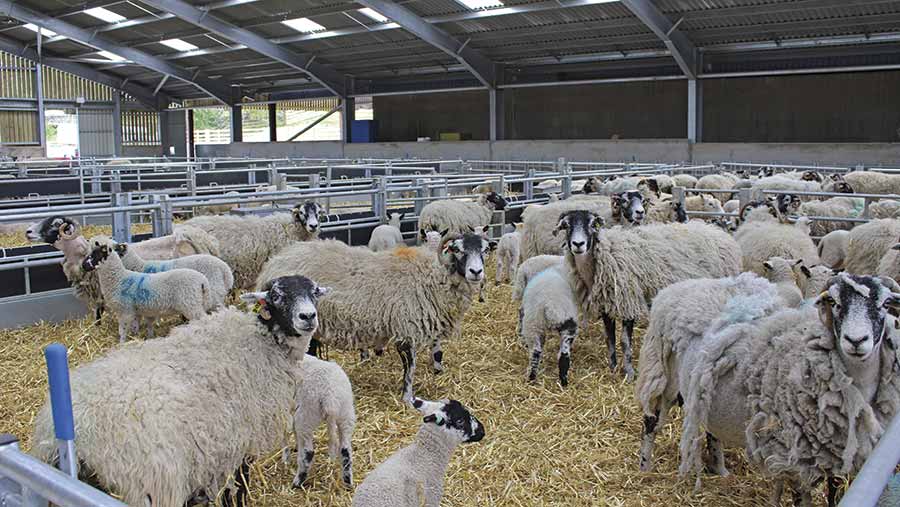 440 ewes can be housed at lambing

Between each pen is a feed passage, which can also be used as a walkway. It means you can get within 5ft of a sheep without going into a pen and disturbing them. It is important for observation.

Flooring in the pens consists of hardcore and 40mm dust-free stone on the top, which is good for drainage and helps reduce bacteria build-up. It is also cheaper than concrete. The rest of the floor is concrete.

The building drains into an underground tank for dirty water. We have a rainwater harvesting tank that holds 12,000 litres, which is used for washing the handling facilities. 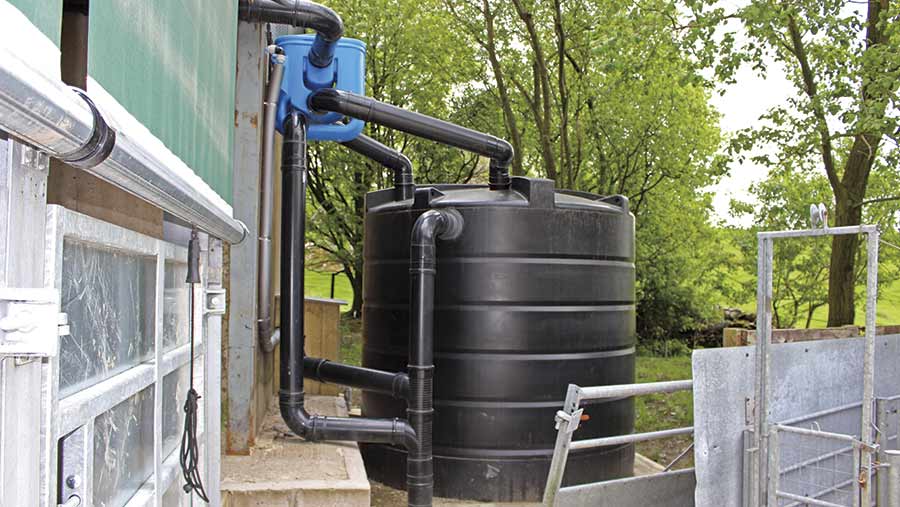 The rainwater harvester holds 12,000 litres and will be used for washing down the handling facilities

A header tank is used to store water, it means there is no risk of contamination going back into the mains. The unit is open on one side and has space boarding at both ends, but has no open ridge.

We also have gale breakers. We have done smoke tests and we are confident the ventilation is right. 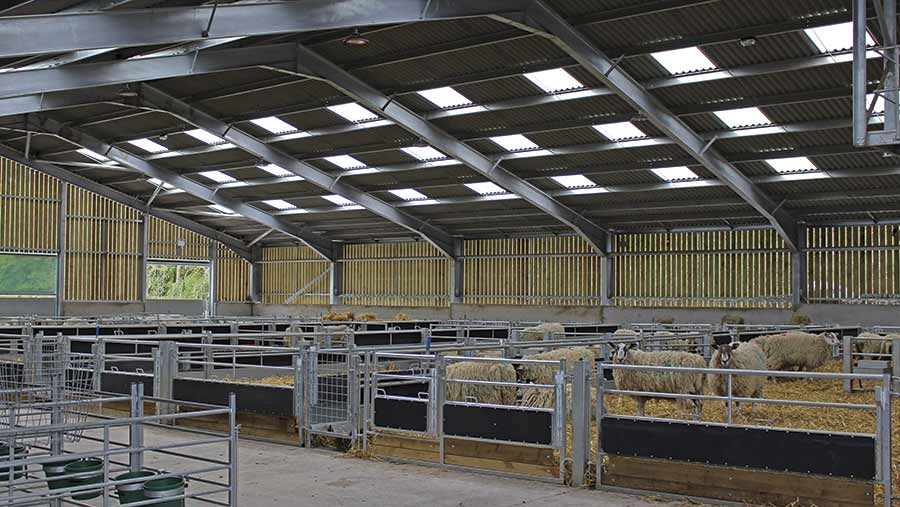 The shed is open on one side and has space boarding at both ends, but has no open ridge

What is a unique feature of the shed?

The sides of the pens are versatile and unique and have been constructed with IAE. One of my bugbears is that when sorting groups of ewes and lambs to turn out, lambs escape and are all over.

With that in mind, we have designed pen sides made from stock board that can move down to create a solid side when ewes are housed with lambs, or move up to create a feed barrier.

When the barrier is up, ewes can be fed on three sides of the pen, which means more sheep can be contained in a smaller space, with enough feeding space per ewe available.

Down the sides of the building, we also have 60 individual lambing pens, which have individual hay baskets and two buckets, one for concentrates and one for water.

This year we have only had one suspected case of joint ill. It can only be the clean environment that has helped this.

How did you design the handling system?

Low Beckside is where we gather sheep off the fell; that tradition remains important to us. If we get other people’s sheep with ours, they can now be separated and so easily collected by their owners.

To assist with that we installed a loading station for quad bikes and also for tractors and trailers, so owners can just come up and load their sheep easily.

We also wanted to link the yard to the new shed, so have installed a state-of-the-art handling system.

The joining race is 3m wide and has three lots of gates, which are covered in stock board for easy cleaning. This means that prior to loading at the loading dock we can hold three groups of animals.

The handling system was developed by the students and me as a student project. We have used a curved race design and have three races. 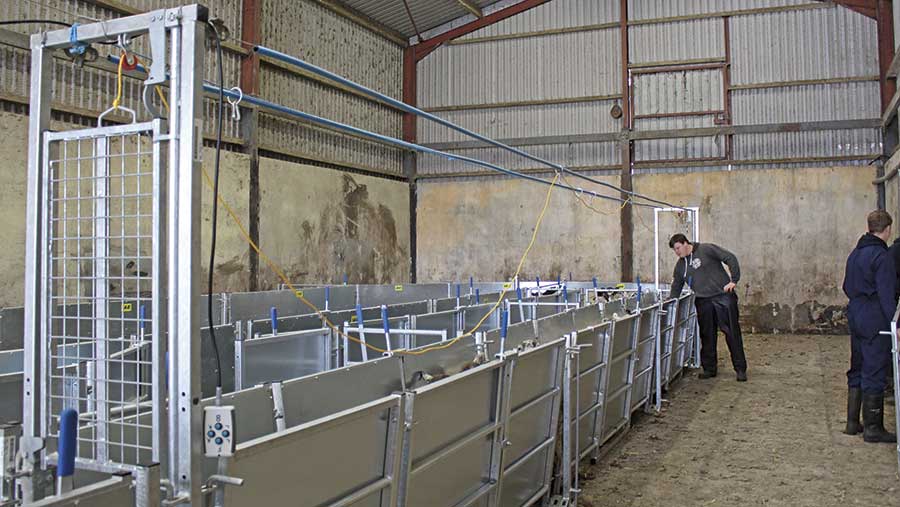 The new handling facilities have three races that can be used for shedding, dosing and running sheep through a foot-bath

One is the shedding race and the other two races are used for dosing and footbathing. They measure exactly 570mm, 750mm and 950mm, which is enough room for a footbath.

We wanted to be able to draft sheep automatically when running them through the weigh scales, so have a three-way shedder. 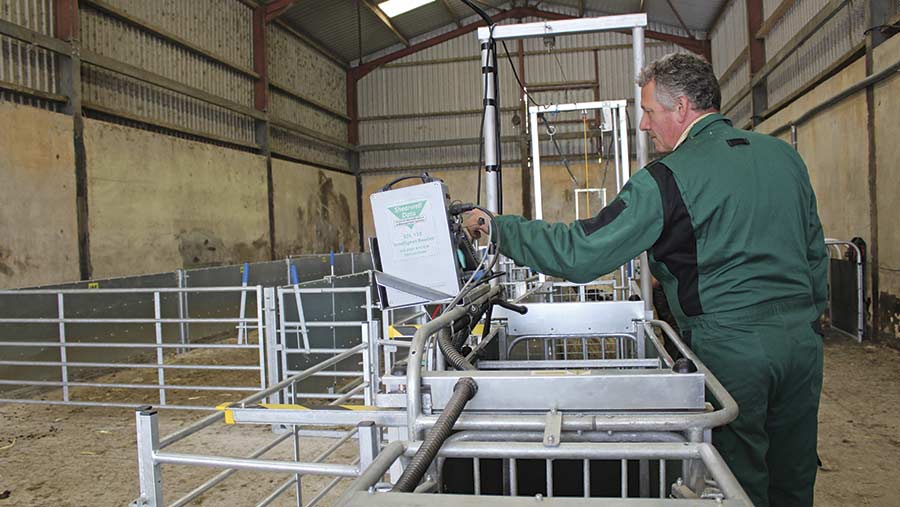 Ewes can be shed three ways automatically or manually

We can also shed sheep manually. The electronic shedder can draw off animals in any combination, with all ewes recorded for ease of lambing, milk, mothering ability, sire of progeny, number of lambs born and sex.

This means when we are selecting animals it is a lot easier and we have the information at our fingertips. We need this in order continually improve the flock performance.

We also have hooks suspended above the race, so you can attach treatments on to the hooks and move it along as you dose the animals.

What has your best buy been?

The mobile combi clamp with EID reader is definitely one of our best buys. This cost £5,000 without the EID equipment, but it allows us to perform procedures out in the field and also back at the unit.

We can weigh animals, dose them, shear them, tail and crutch. It is just so versatile. We have adapted it so it runs off two 12V batteries. 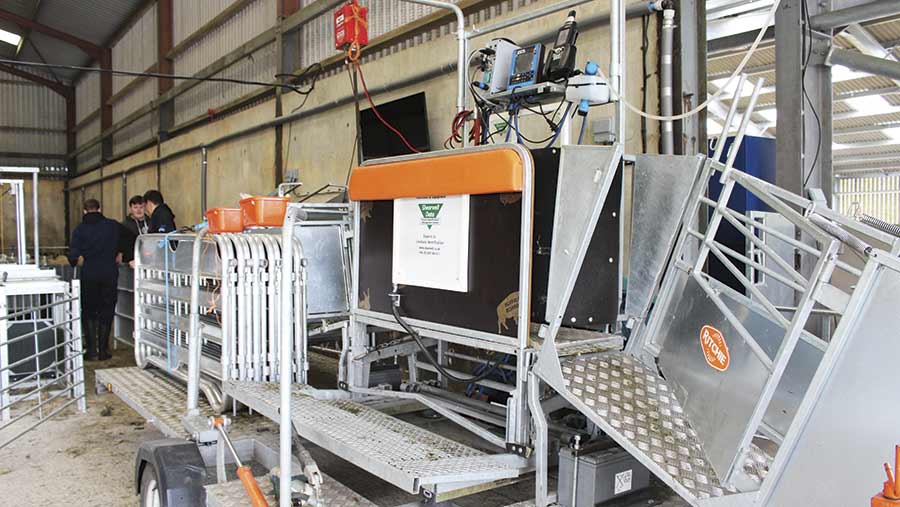 The FarmWorks app by Shearwell is fantastic as it means you have all the information on your phone at any time. It’s as easy or as complicated as you want it to be. 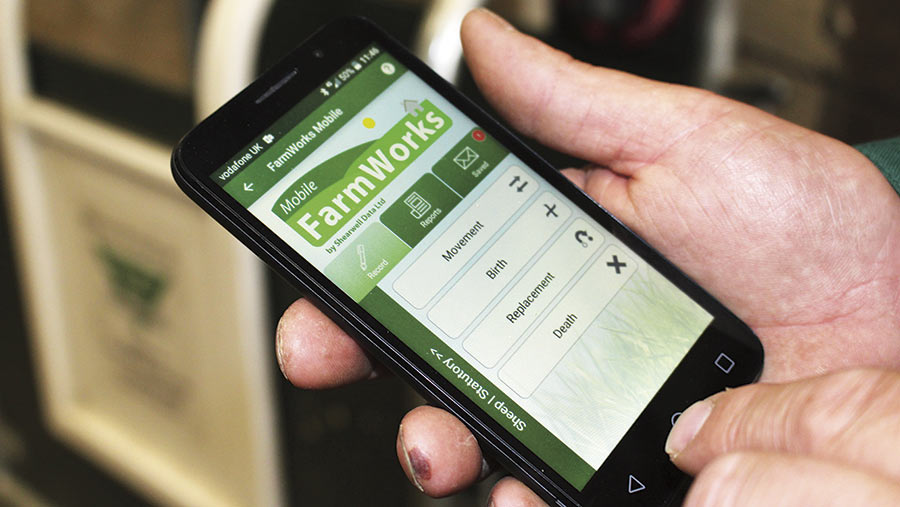 It creates a lifetime profile of an animal and can record movements, be used for farm assurance, vet and meds – it’s everything you need in one programme.

For example, if you were up on the fell and you found a poorly animal, you could type in the last three digits on her tag number into the app and it would find a match. You could then record the treatment. The ability to use the app from the field is phenomenal.

The FarmWorks app and use of EID means you are farming based on fact. We want the right sheep in the building and producing the right animal in the best length of time. Data is great, but only if you take action on it.

The kitchen in the sheep shed is also something we couldn’t live without. It means we have everything on hand in one building and saves so much time.

What would you do if you were to build again?

We might have pushed for a bigger building size, but were limited because of existing buildings and planning permissions.

What’s nice to have?

We have a race reader, which is really good for sorting animals out before going to market or another farm. It cost £2,000. You can just run the sheep through the reader, which sends all the information to the FarmWorks app on my phone.

This can also be linked to a stick reader. It can then pre-populate movement licenses, send information to market – whatever you want it to do. 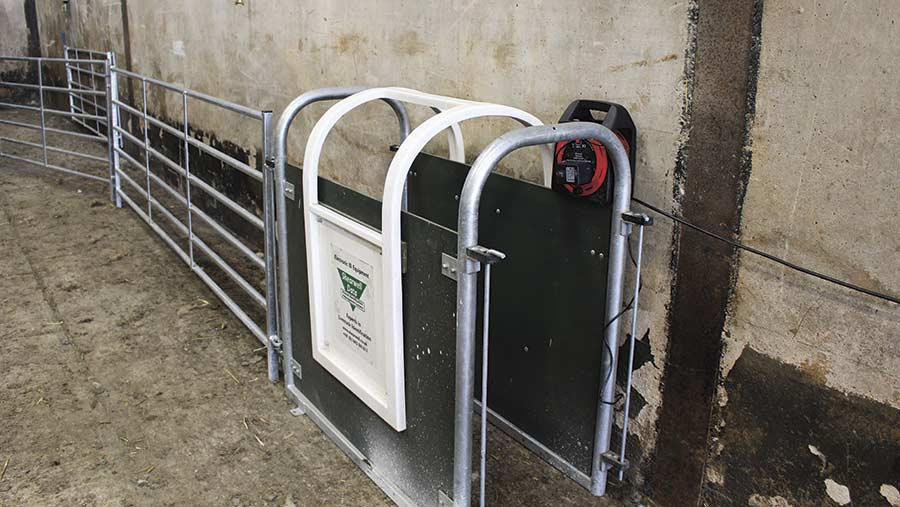 What is one of the newest bits of kit on the farm?

The Te Pari weigh head and automatic dosing gun is only the second one to be installed in the UK and Ireland. From New Zealand, the system can be attached to any weigh system. It allows you to weigh sheep and then it links to the dosing gun and will send the correct dose, based on the animal’s weight, to the dosing gun. 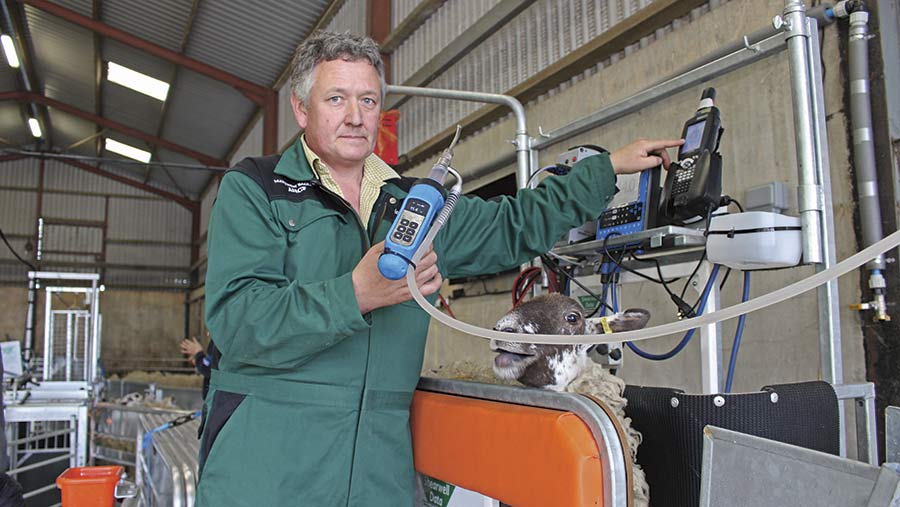 After each animal, it is then automatically calibrated. This means each animal is getting the right amount of treatment for its weight.

This could have a massive impact in reducing resistance to worms and antibiotics as animals are getting the right dose for their weight.