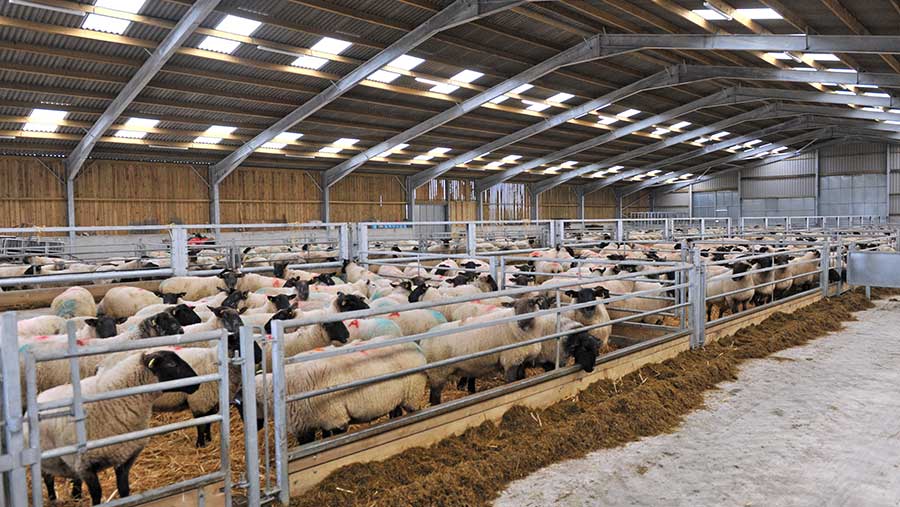 The shed is purpose-built for lambing, but can accommodate beef cattle too

A Welsh family farm is future-proofing its sheep enterprise with a £250,000 investment in modern housing that allows its flock of 1,400 ewes to be lambed under one roof.

Alan and Catrin Williams’ three sons – Dafydd, Wiliam and Ieuan – have all joined them in their 316ha livestock farming business near Pwllheli in Gwynedd.

This has meant upscaling the sheep and beef enterprises, tourism diversification and investing in facilities that improve efficiency and performance.

At lambing, ewes had been housed in four separate buildings, some of which were not well designed for this purpose, and this had put a strain on labour and flock health.

Part-funded by a Welsh government Sustainable Production Grant, the family invested in a new shed last year, purpose-built for lambing, but with the flexibility for finishing beef cattle too.

This has transformed lambing, as we discovered when the family gave us a tour of their new facilities. 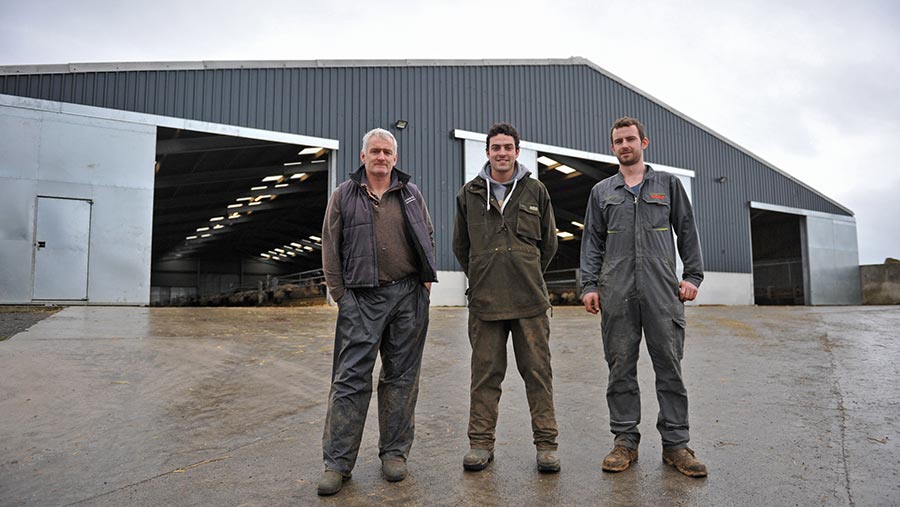 How did you design the building?

We had been planning it for five years, so it gave us the opportunity to pick up some of the best ideas from sheds on other farms we visited during that time.

Our builder also had some good ideas, so it was a combined effort.

£250,000 and yes. We were very lucky to get 40% of the project funded by a Sustainable Production Grant.

We would still have built a shed without this, but not on this scale.

Who constructed the building?

Elfed Engineering of Cerrig-y-Drydion. It took two-and-a-half months to build.

It is a clear span building, measuring 60m by 33m and 4m to the roof eaves.

We wanted clear span because it gives flexibility to be adapted in the future should we need to – all the posts are in sleeves and can be removed with the fittings in a single day.

Having no girders makes bedding a lot easier – what we have allows for one continuous flow at bedding.

One-quarter of the shed has a plastic slatted floor with a 1.2m-deep underground manure tank that should only need to be cleaned out every two years.

We didn’t have slats in all the pens because they are specifically for sheep and we want to use half of the shed for housing cattle when it is not in use for lambing.

Cost was another consideration – it was £25,000 to slat the area we covered.

How many sheep does the shed house?

It houses 850. We lamb 1,400 sheep, but in two groups. The first group lambs in the first three weeks of February and after that we lamb the shearlings and the 6% of ewes that repeated at tupping.

We house according to the weather, but mostly it is in the second week of December; six weeks before lambing.

How do you group the ewes at housing?

The triplets, twins and singles are penned separately and fed a different ration.

The triplets are opposite the singles for ease of fostering. 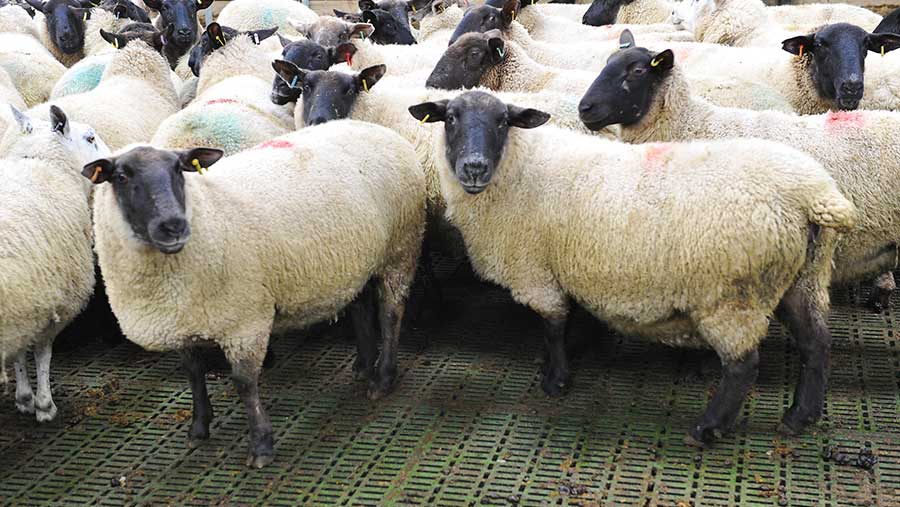 We have three, 60m feed passages that allow us to feed a total mixed ration (TMR).

We already had the mixer wagon for feeding the cattle, so there was no additional cost for machinery.

We feed once a day, in the morning, and push the silage up twice during the day. It takes half-an-hour a day for one man to mix and feed – it used to take two men an hour a day and involved carting the concentrates around in a wheelbarrow. 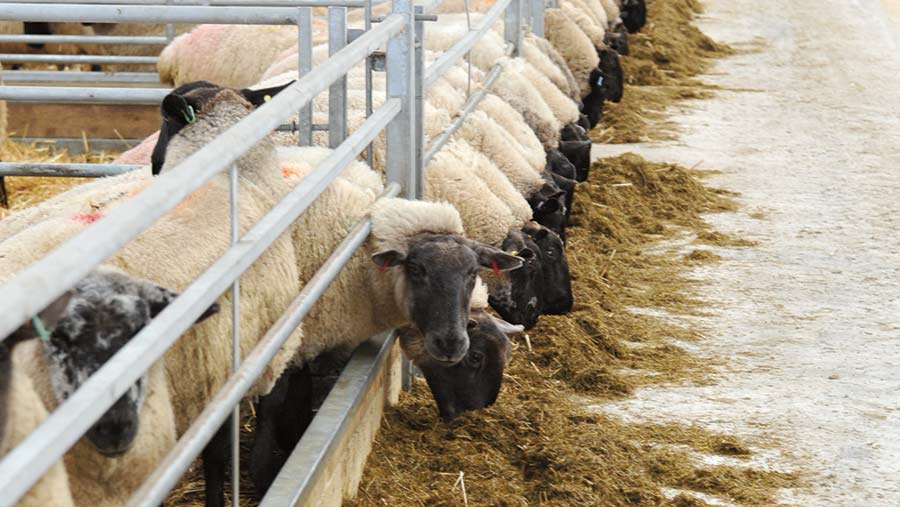 Three feed passages allow a TMR to be fed

With TMR, the ewes always have feed in front of them and there is no stress at feeding times, so they are a lot healthier and, because they don’t overeat, we don’t get any cases of prolapse – we used to get 15-20 and some very severe cases.

We also had very few cases of calcium deficiency. Having feed constantly available means the shy feeders get plenty of feed too. 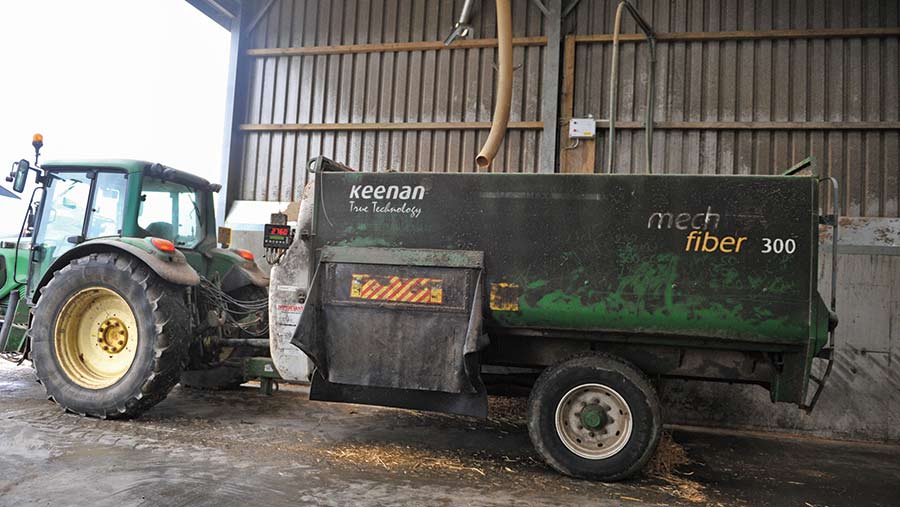 Which features have helped ease management?

We have positioned the lambing pens next to the individual pens, so there is only a short distance to move the animals between the pens.

Foot health has been good on the slats and it means we use less straw overall.

The water supply in the individual pens that Elfed designed.

There are 10cm pipes as troughs, but we had to cut the pipes in half because there are passages between the sets of pens, so there is a ball valve between these to allow water to flow to each of set of lambing pens.

There is a plug at the end that allows us to flush the pipe if a ewe fouls the water.

We used to carry water to the small pens in buckets, so this is a huge labour saving. 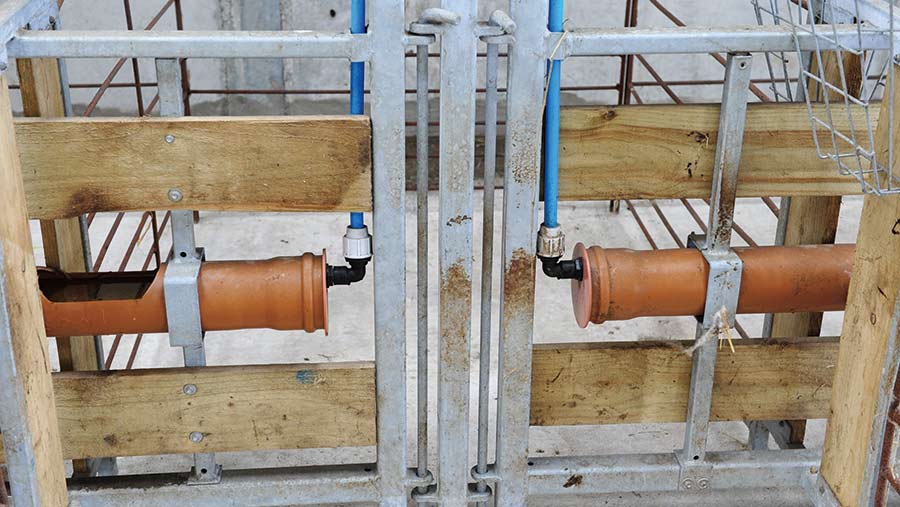 10cm pipes are used as water troughs, with ball valves between pens

Six wheeled gates that run between the lambing pens and the individual pens.

When we move the ewes and lambs from the lambing pens, the ewes can be flighty, but the gates allow us to filter them from one pen to the other. 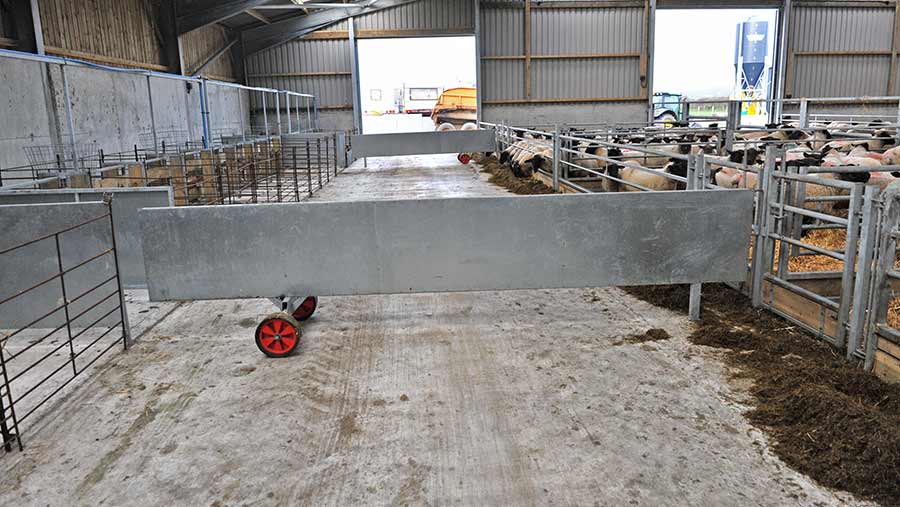 We clean the pens after every ewe and we try to pressure-wash a block of 30 pens every fortnight.