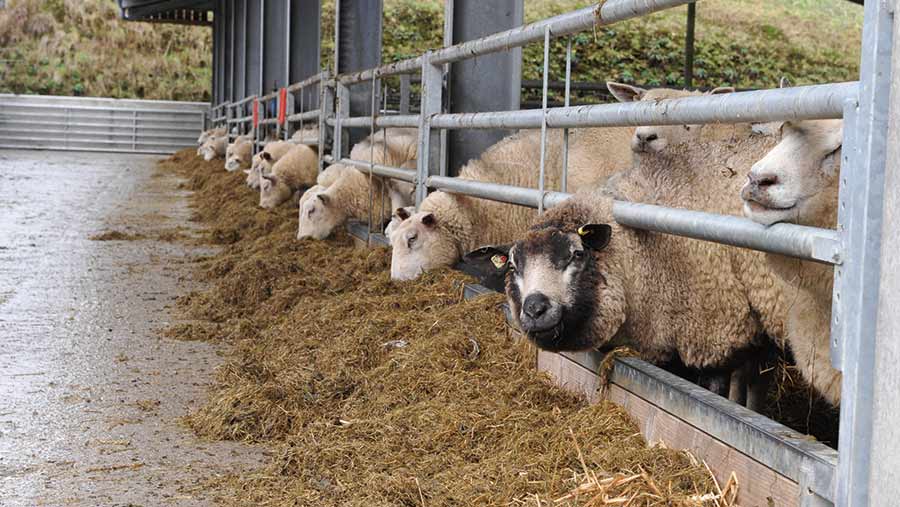 Doubling housing capacity by building a shed for 600 ewes is allowing a Carmarthenshire sheep enterprise to concentrate its lambing period in an eight-week block.

Ben Anthony and Diana Fairclough have replaced a 26-year old wooden building at Frowen, near Login, with one that enables all ewes from the indoor lambing flock to be housed at the same time. 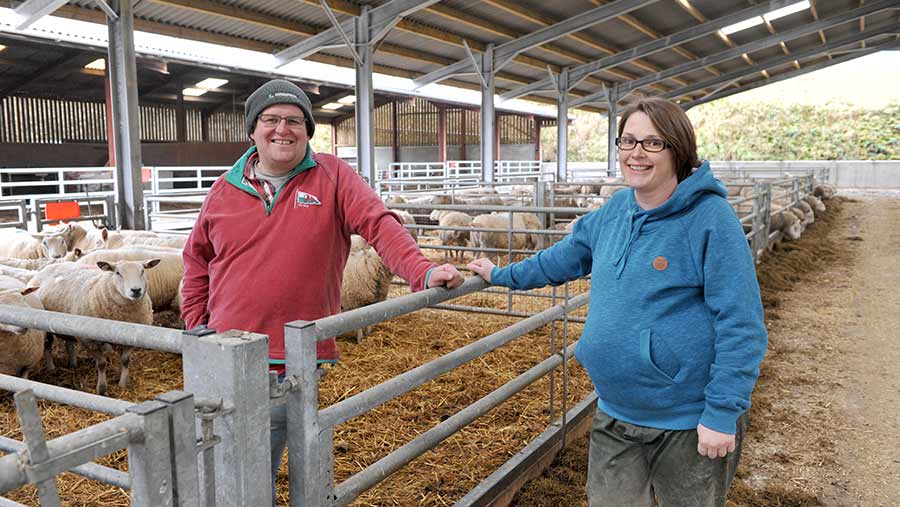 The new build took just three months to install and will cost £65,000 once the extras are fully completed.

Having an open-sided design has allowed the couple to double feeding space. The extra space means they have condensed lambing from three months to just eight weeks. 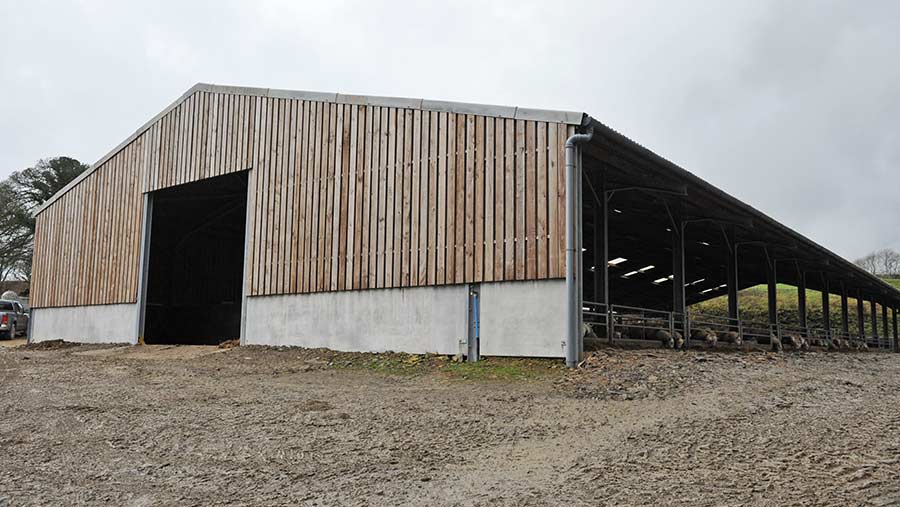 Why was new housing needed?

The shed we had was showing its age and needed replacing.

It could only hold 300 ewes, which meant we had to run a conveyor lambing system which we found difficult to manage because we would always be trying to fit other jobs around the gaps in the lambing.

We looked at different options, including outdoor lambing, but in a small unit like ours every lamb counts.

It gives us security and somewhere to house the sheep if the weather turns like it did last spring.

How did you design the building?

We based it on the shed that was here before, but we improved on that design.

There was nothing wrong with the old shed in terms of design but it only had 25ft of feeding space – we have more than doubled that by having open sides. Also, the centre feed passage was too narrow as machinery grew. 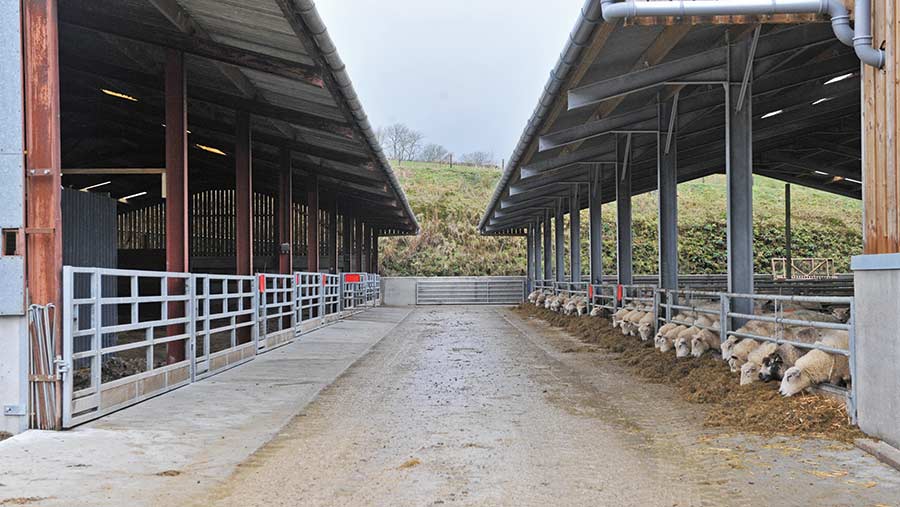 We have built it 20ft closer to other housing than the original shed, to make more use of that housing for individual pens at lambing.

The old shed had no direct access to that housing; you had to walk the ewes and lambs around the front of it to get to that housing, but access from the new shed is directly opposite.

We have fitted gates in the passageway that runs between the two sheds so it is much easier to move animals from one to the other.

We didn’t strictly have a budget but we expected the whole job to cost around £65,000 and that will be more or less the case when we add some additional features like a walk-through footbath and a loft for storage, which are currently in progress.

Who constructed the building?

A lot of the work was done by ourselves and a close friend of ours, Gary Morgan, who was the brains behind the construction.

We supplied our own labour to help reduce costs – Diana was fitting the water bowls on the day our son Deri was born!

We bought the galvanised feed barriers from GST Fabrication in Lancashire via Facebook – the owner gave us a date for delivery and he stuck to his word.

We used materials from a variety of local suppliers – the roof was from Ad Clad in Pumsaint and the cement, stone, timber and other items from a local business, DP Building Supplies, Llanboidy, and nuts and bolts from WH James, Crymych.

We always like to spend our money locally because we think for every pound you spend you will always see a couple of pounds coming back to the local economy.

It is an 11-bay clear span open-sided building, measuring 165ft by 68ft and 12ft to the roof eaves with 6ft overhangs.

There is a 14ft-wide central passageway. The yard is in a sheltered position so it allowed for the shed to be open sided.

There is a 2.4ft floor gradient, which meant we had to adjust the height of the feed barriers accordingly.

How long did it take to build?

We started work in early December 2016 and the sheep were in it by February 2017. This will be our third year of lambing in it.

We extended it by 4.5ft to allow for that and in so doing we were able to create another pen.

How many sheep does the shed house?

It houses 600 – there are 10 pens with accommodation in each for 60 ewes. There is also a one bay pen for orphan lambs and another used as a storage area. 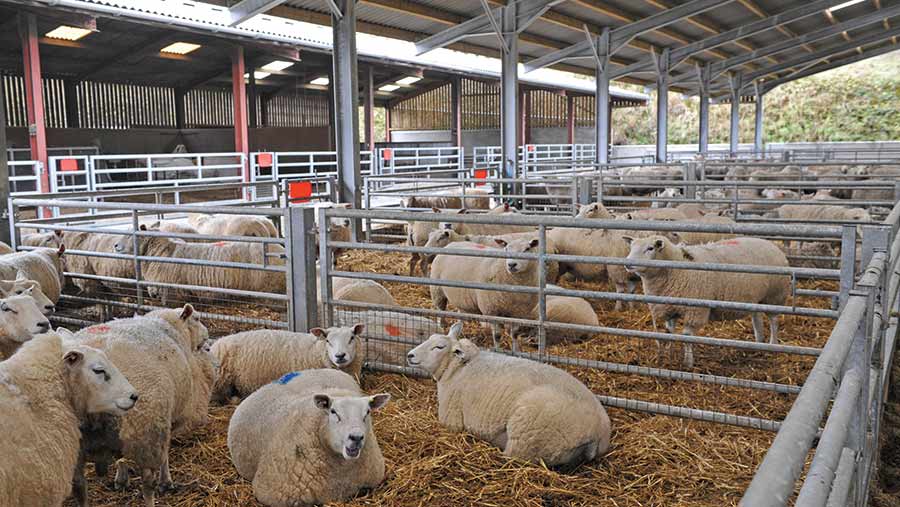 We might divide some of the pens to create more half pens as they are very useful for smaller groups or groups that need extra care. This only requires extra gates as the water fittings are already there.

We will have 120 small pens but many of these will be in the shed opposite – we will create small pens in the central passageway of the new shed when there are fewer ewes to lamb.

The ability to feed the ewes TMR. We hadn’t planned to have this feeding system, it just evolved because we couldn’t get the right concentrates in nut form. 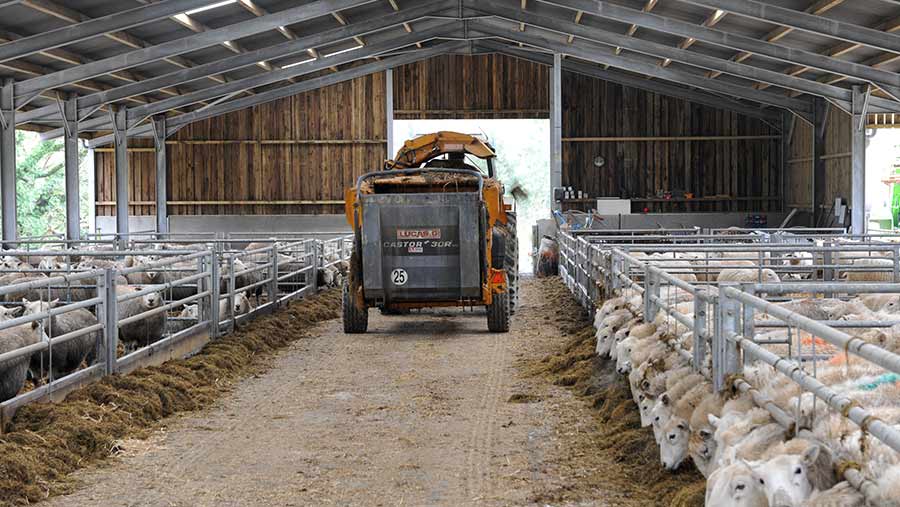 We had been getting a 34% concentrate nut from Leicester as no one else was willing to make it, but transport became an issue.

We resolved the problem and adopted TMR feeding, sourcing the straights from a local blending plant in Llanboidy.

We adopted the system in 2018 and it has brought many benefits; the ewes are eating 25% more silage with less concentrates, they are content and the shed is always quiet.

We would have small gates in all the feed barriers, four per pen; this would especially useful if we do divide up some of the pens at a later stage.

Having feed barriers on two sides of each pen, because this doubles the feeding area.

We now have 60ft of feeding space for every pen instead of the 25ft we had in the old shed – the open-sided design allowed for this. There is less competition at the feed barrier. 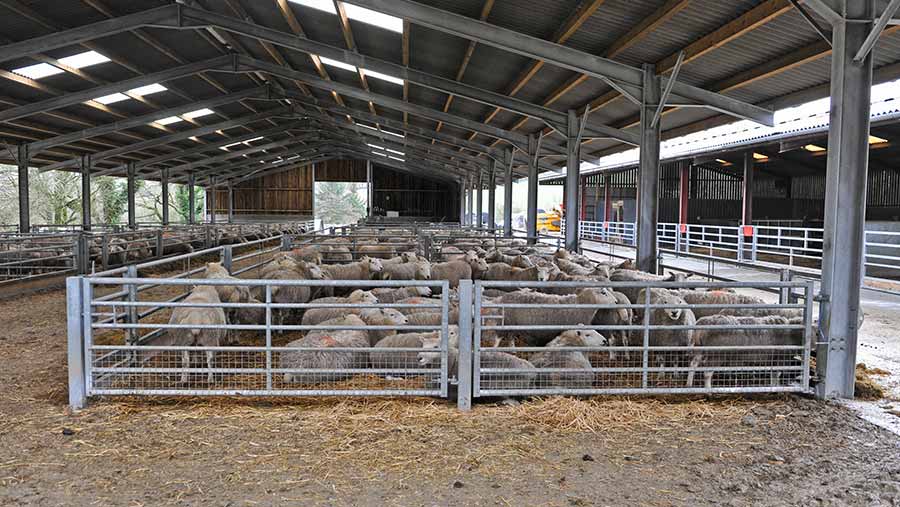 It is a really nice shed to work in because it is so airy, and the sheep are content, it works better than we had expected it to. 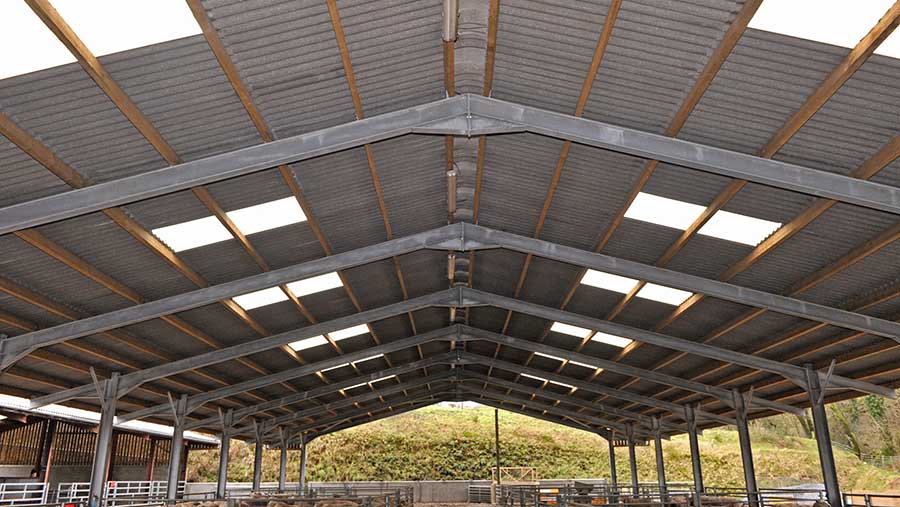 We use less straw because it is so well ventilated.

Ewes and lambs are on a rotational grazing system and lambs are later finished on a forage-based system which includes red clover leys.