Installing a suspended slatted floor in a redundant barn has transformed the building into low-cost winter accommodation for up to 300 ewes at a Welsh upland farm.

The building has enabled the Ellis family to make savings on straw, increase ewe numbers and relieve pressure on grazing ground at Nant Cornwal, near Denbigh.

In the build-up to lambing, Ifan Ellis, who farms with his parents, Wyn and Sian, threw open the doors to give Debbie James a tour in this latest edition of What’s In Your Livestock Shed. 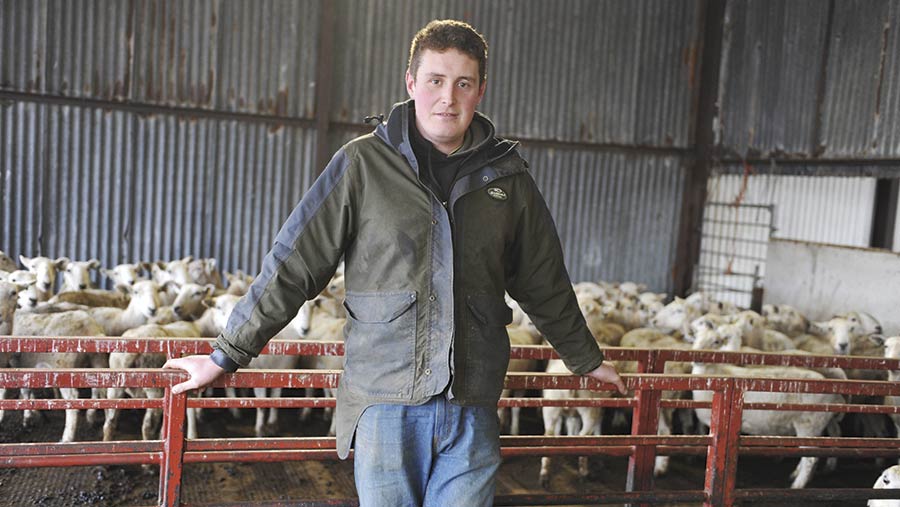 What are the shed’s vital statistics?

It measures 72ft x 30ft. It was originally a hay barn and in recent years we had been using it to store a bit of straw and fertiliser. It didn’t really have a purpose other than that. 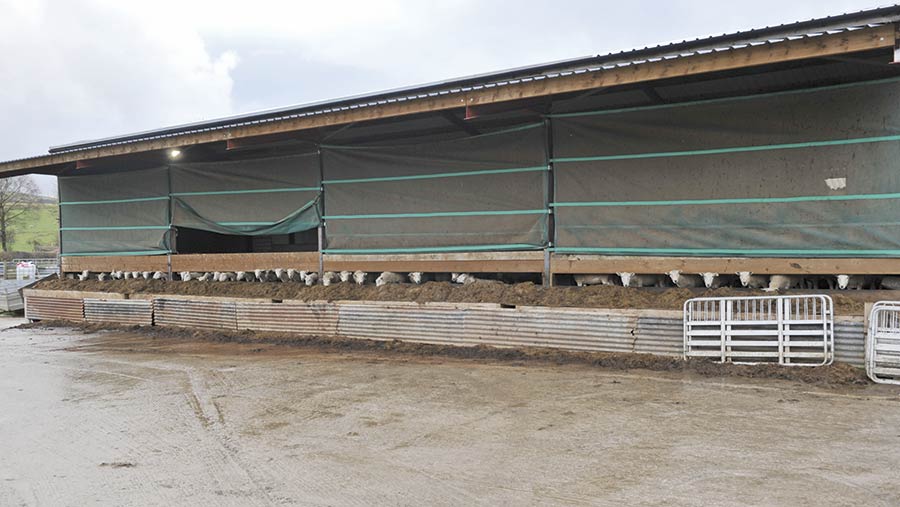 We needed to find a way of getting the ewes off the land in the winter to preserve grass. We can now house the sheep in the second week in January, which means we can close 30% of the land by mid-November.

This means that when we turn the ewes and lambs out we don’t need to give them any additional feed because there is plenty of grass.

That wasn’t the case before, which meant going around the fields with a snacker and that was not ideal because when you have ewes with young lambs you get mismothering in that situation.

The farm isn’t suitable for growing swedes, because we have a high level of rainfall and, even if it was, it would mean losing 15-20 acres of grazing for April and May. That would put too much pressure on our grazing.

Where did the idea to convert the shed come from?

Dad is a field officer with Dunbia and had seen slatted floors on some of the farms he had visited.

I’m also a member of a Farming Connect discussion group and had exchanged ideas with the other members. We copied a design we saw on another farm.

What changes did you make?

We created a 3.5ft clearance between the floor and the ground by laying concrete railway sleepers in pairs, one on top of each other.

We made timber frames to sit on top on these and on each timber frame there are four 8ft x 4ft sheets of diamond, mesh which allows the muck to fall into the cavity below. 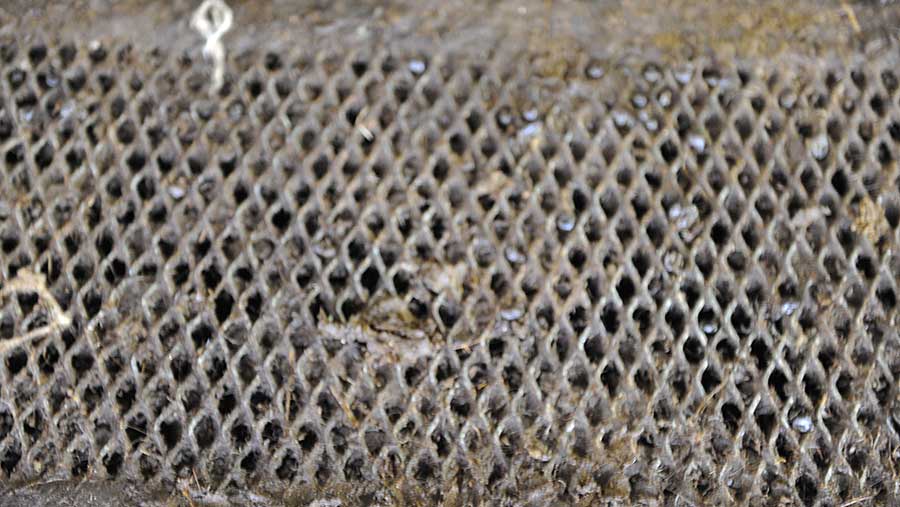 The higher we could raise the floor, the more muck we could store. Mucking out is a two-day job every third year. We lift the timber frames off the sleepers with a telehandler and pallet forks to muck out.

There is a 7ft overhang on the roof to shelter the feed barrier.

We also fitted galebreakers to protect the sheep from the weather because the shed is an open spot and I have seen snow drifting into that shed in previous years. 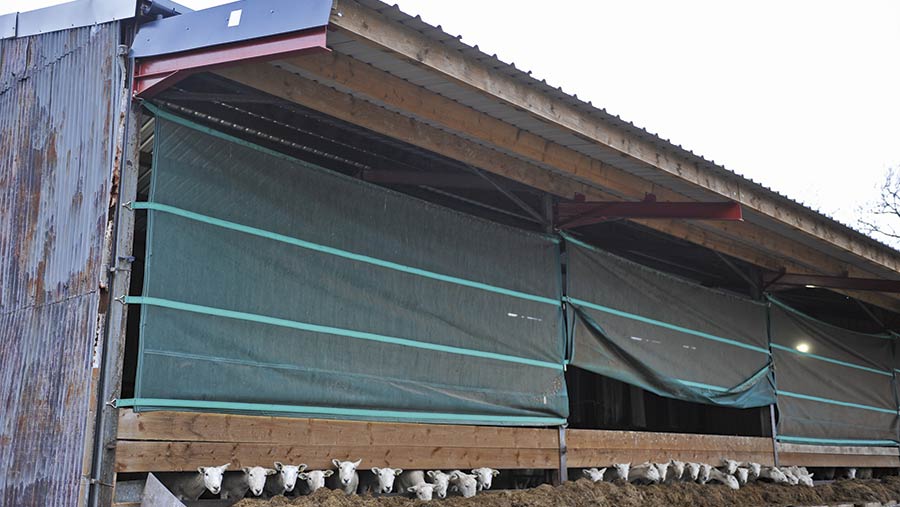 Initially the floor was open-ended, but we noticed that the wind was blowing straight underneath and up through the floor and it was cold for the sheep.

We sealed the ends with sheets of zinc and within half an hour the sheep were lying down, because the floor was warmer. 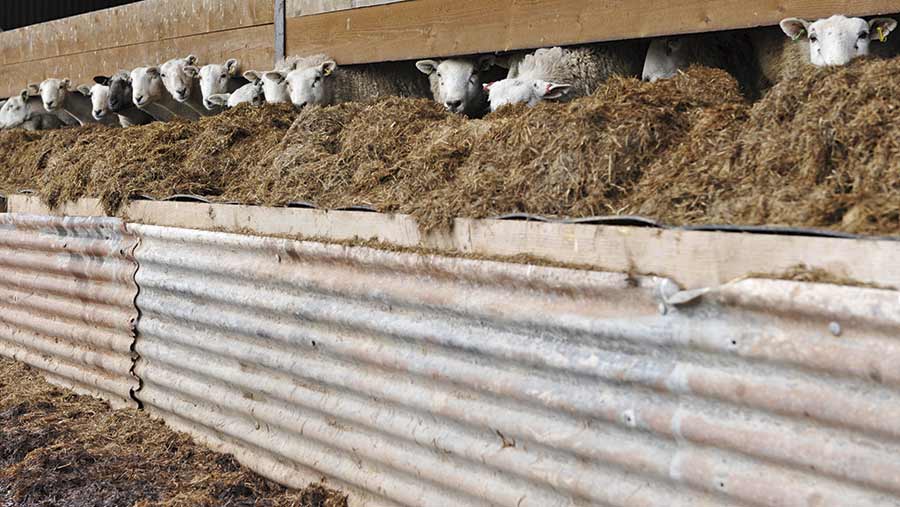 A local builder, Glyn Foulks. The job took five days and most of that was spent building the timber frames.

What are the cost savings?

It is a cheap way of keeping ewes for the winter. If they were on straw, 300 ewes would need a bale a day from 12 January to 25 March. We bought straw last summer when it was £25 a bale, but it is probably double that now.

It takes 10 minutes to feed every other day, there is no mucking out of dirty straw, so there are significant labour savings.

There have been cost benefits too, because the shed has enabled us to increase ewe numbers by 250. We couldn’t have had those numbers when the sheep were at grass in January and February.

What animals do you house in the converted shed?

The later lambing ewes – those that lamb from 1 April. We have a shed with straw-bedded pens for lambing so, by the time we are ready to move these ewes from the slats, the earlier lambing ewes, which lamb from 25 March, are at grass.

We shear the group housed on the slatted floor in early January, eight weeks before turnout, because it allows us to accommodate more in the same space and the wool tends to clog up the gaps in the wire mesh.

We have noticed that the shorn ewes eat more silage, which means lambs are born stronger.

We also house store lambs in the shed from October to January. 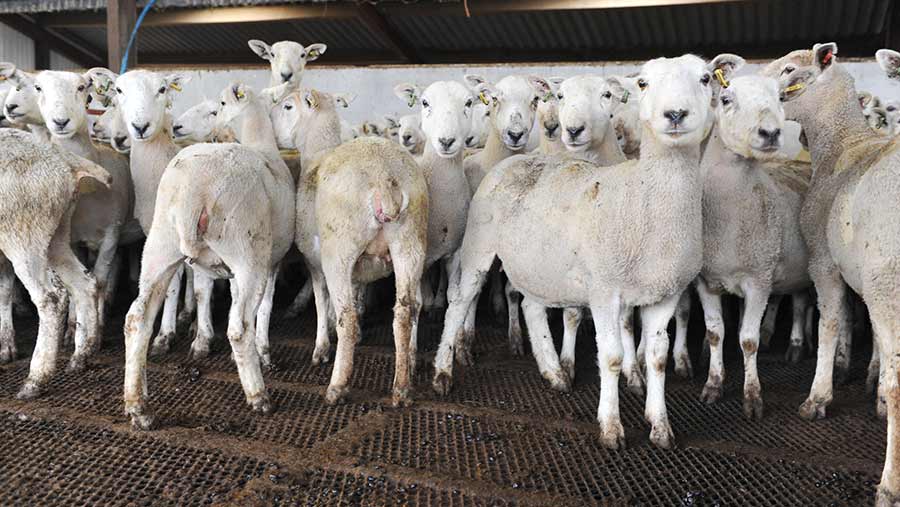 How do sheep perform on slats?

We have had fewer issues with lameness because there is no moisture retained. If feet are good when the sheep go onto the slats they will stay good.

Also, the lambs born to these ewes finish at an average of 21kg-22kg deadweight, compared to 19kg for the rest of the lambs.

Would you have done anything differently?

The ideal would be to have a pit underneath, but you can’t do that with an existing shed, so we had to design it around what we had.

The only downside is that the feeding area isn’t at ground level, which does create problems. Because the feed troughs are off the ground we have to feed clamp silage that has been through a straw chopper and deposit this with a loader.

Within Defra’s Code of Recommendations for the Welfare of Livestock, it states that newly born and young lambs should not be put on slatted floors unless suitable bedding is also provided.