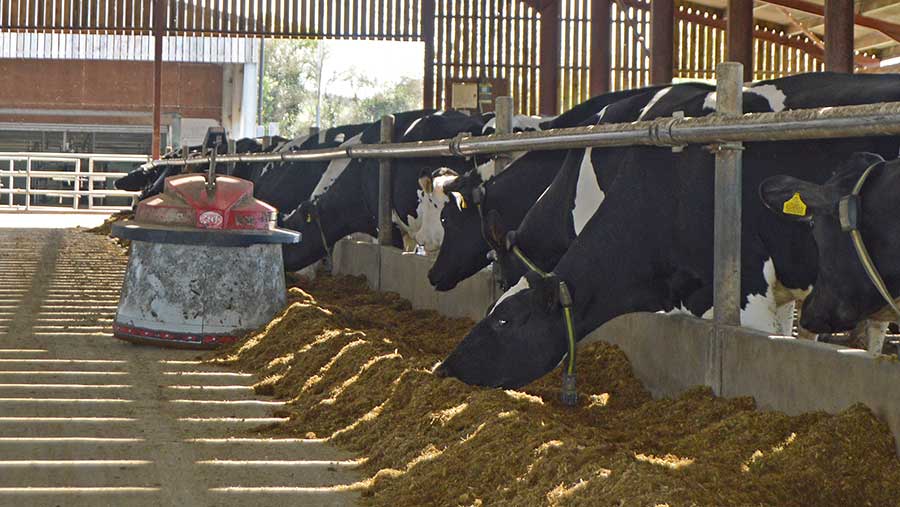 The Symms had reached the point so many farming families do – the “all in or all out” crossroads.

Their old farm buildings were crumbling around them and the cows were feeling the pressure as much as they were.

Robert and Bryony considered altering the existing sheds on the edge of the village at Batsons Farm and putting up a cover on the yard, but knew that wouldn’t be popular with the neighbours.

So, working with their son Jake, 22, with a clear succession plan in place, they decided to build a new unit on a greenfield site away from the village to take the business forward.

They started milking at the unit in November 2013 and haven’t looked back.

What are the unit’s vital statistics?

The main shed at the unit has 200 cubicles in 14 20ft bays. The shed, with a 2.5% gradient on the ground, has a small yard and slurry lagoon beyond it.

Cows are bedded on deep sand cubicles, with grooved concrete flooring, rubber matting in standing areas for feeding, and resin coating in the feed passage where the cows receive their total mixed ration.

The roof has an open ridge and slits across the panels to maintain good ventilation, as well as a few skylights.

Because the Symms wanted the option of housing all year, they decided against having too many skylights, which could make it hot in summer. 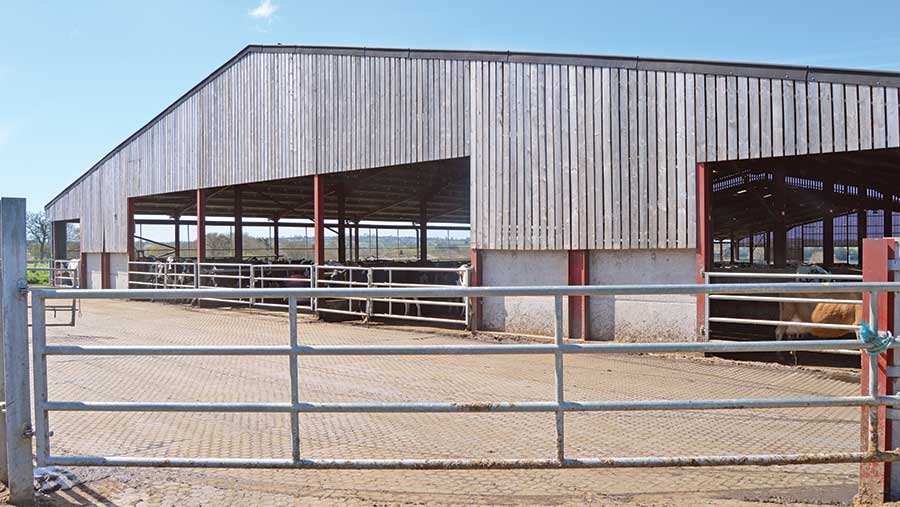 Artificial lighting kicks in when natural is not strong enough and provides 16 hours of “daylight” and eight hours of red light.

The Symms were able to get £70,000 of Rural Development Programme for England grant funding towards some of the welfare-enhancing additions to the building, such as heat recovery units, automated curtains on the shed sides and the cow brushes, which “the girls love”.

At the new unit, a transition shed with 13 cubicles allows them to feed a transition diet for three to four weeks pre-calving. The build also features a new 16/32 herringbone parlour with rubber matting at entrance and exit and a half-covered collecting yard, to encourage the cows up to the parlour.

Six new clamps at the site bring the total to nine and have been very useful given the switch to a multicut silaging system last year.

Calves are housed in hutches – individually for the first four weeks and then in group hutches, but a new calf shed is on the horizon.

“It was quite a leap of faith,” says Robert.

“My main brief was I wanted the best set-up for the welfare of the cows.”

The Symms worked on plans for the unit with Mike Bray of Kite Consulting and Tim Mckendrick, a building design, dairy husbandry and milking technology specialist from The Dairy Group.

They sold a 36ha plot to help fund the initial build, but have one main loan that was taken out more than 30 years ago, which they are now 25 years off clearing.

Matt Phillips of WE Phillips and Sons, Honiton, has done most of the work at the unit.

Has the build been worth it?

Definitely. Milk yield, at 10,800 litres, is up nearly 50% compared with yield in the old buildings. Lameness has dropped significantly and cell counts have been hugely improved.

Somatic cell count now sits at 165 and bactoscans are in the teens and sometimes single figures. 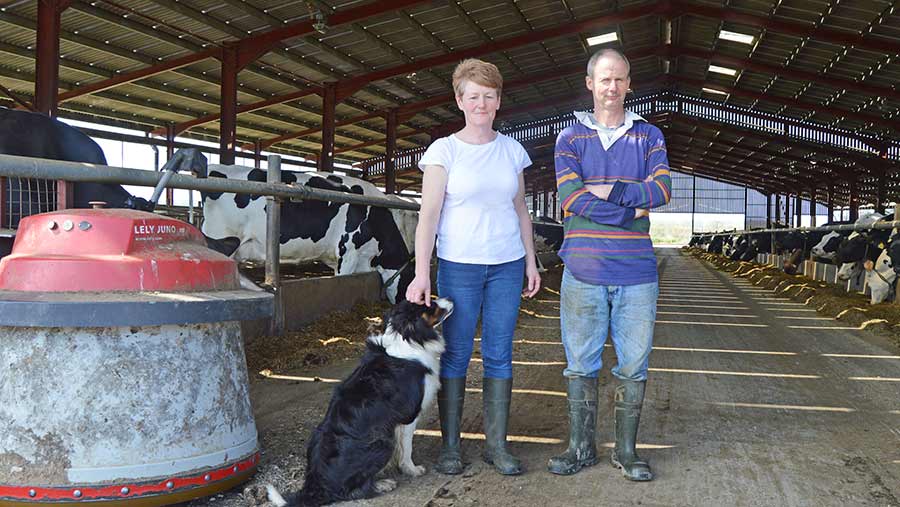 “We used to fight to keep cell count under 300 and bactoscan under 50 in the winter in the old sheds,” Robert recalls.

“Lately mastitis has been really low,” adds Bryony. “Levels have been below 20 and dropping.” The running average is 17.5 cases per 100 cows.

The team has already been using selective dry cow therapy for a number of years and is focused on reducing antibiotics use, participating in a local antibiotics action group with other farmers.

“In the previous setup there were a lot of tight turns for the cows and they were on straw and slurry, so we got a lot of white line disease,” says Bryony. “We still get lameness, but now cow flow is so much better, it’s much lower.”

Both the resin floor, which reduces food waste and increases intakes, and the cow brushes are up there among favourite features of the shed.

The Symms also opted for high kerbs on the beds, which have proved very successful as they allow deeper sand bedding and keep the cows clean.

What would you do differently if you were starting the build over?

With a blank canvas, the Symms’ would install more calving pens. They planned to have two, but ended up losing one due to cow flow out of the parlour. They would also fit LED lights in the main building to save on energy bills.

“I’d have a bigger slurry store. It’s supposed to have five months’ storage now, but I’d double it,” says Robert.

“For the first year the lagoon was our biggest headache,” he adds. They initially used a slurry guzzler, but have since switched to spreading the slurry with a dribble bar. By doing this, as well as testing the slurry and soil-testing the fields, they have reduced artificial fertiliser use.

The couple say they would have started 10 years earlier if they’d known what they do now – meaning they’d also be 10 years closer to paying off the debt.

What next for the team?

The calf shed is a work in progress and Bryony hopes to have it operational in the next couple of months, but finding “the perfect pen” has taken some time.

The shed will feature removable polycarbonate walls on metal frames, so calves can start in individual pens and as walls are pulled out, be gradually introduced into larger groups. 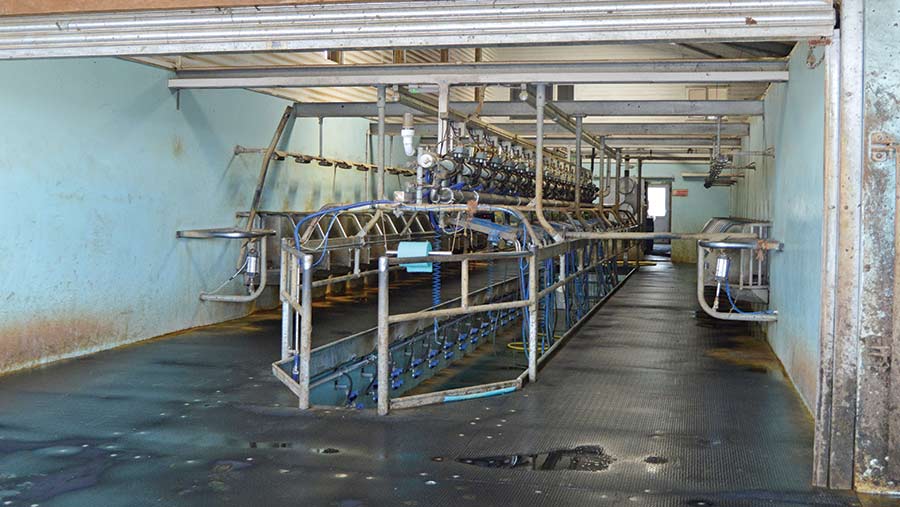 Cryptosporidiosis has always been something that needs managing at Batsons Farm so the hygiene aspect is hugely important to the team and the concrete floor of the shed will make this easier.

Following the calf shed, it will hopefully be a new and improved dry cow shed.

Away from the buildings, Jake, who is passionate about breeding, is investing in genetics, selling breeding stock, planning to start showing and looking to sell embryos from some of the best pedigree females from the Symba herd.

“Every year we try something else,” says Robert.

In 2015, the Symms family won the inaugural National Milk Records HerdWise award for their proactive approach to best-practice Johne’s management in their herd.

Johne’s prevalence has fallen drastically from having up to 15% infected in the Symba herd in 2012, to having only one red cow (infected and no longer controls infection) and five amber (infected, but infection is controlled) animals now.

Bryony Symms said it was an online calculator that really triggered the on-farm action because it revealed that an estimated prevalence of 10-15% in the herd actually meant 50% were likely to be infected.

“I think what really shocked me was it said you could have up to 50% and I was absolutely horrified,” she recalls.

Her five tips for getting on top of the disease are: