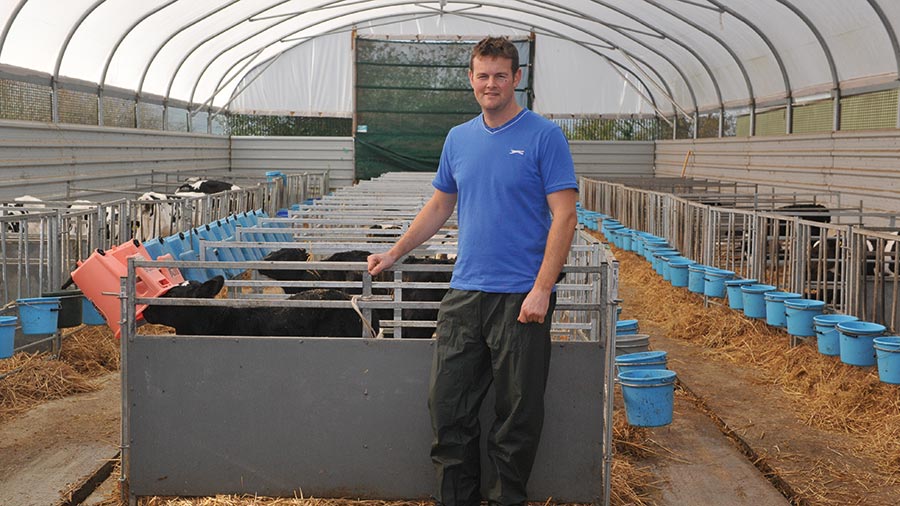 A Carmarthenshire dairy farm converting to autumn block-calving from a level milk supply profile has relieved pressure on calf-rearing facilities with low-cost housing.

Roger and Alison Evans and their sons, Jonathan and Robert, explored different options for creating additional shed space at Penlan Argoed, Carmarthen, before they settled on polytunnels.

Jonathan explains why the tunnels work so well for them.

See also: WIYLS visits the only off-grid milking robot in the UK

What youngstock housing did you have before?

We didn’t need as much space because calving was spread out over the year.

The shed we had was close to cow housing and this shared airspace with older animals wasn’t good for calf health. We had quite a high level of pneumonia infection.

How much did the new housing cost?

Each tunnel was £10,000 and we spent another £14,000 on the groundwork and concrete. We already had the pens, so we relocated these.

Instead of having one long tunnel, we decided to have two shorter ones with a 6m gap in between to help with ventilation. Having those two open, but sheltered, ends is good for airflow. 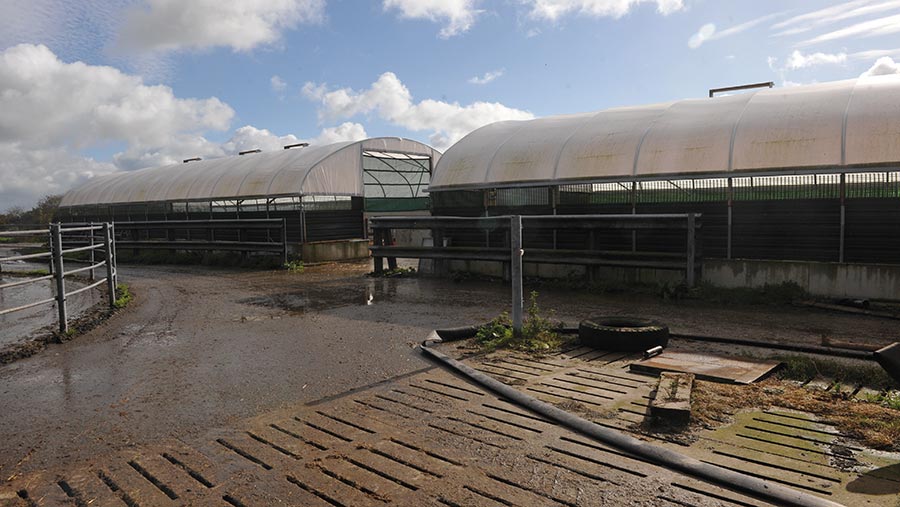 What are the dimensions?

In one, we have 72 individual pens, and in the other, eight group pens, each holding eight to 10 calves. The pens are straw-bedded.

The sheeting is clear; we did consider green as we thought it would blend in better with the other buildings, but we are pleased we didn’t.

The clear lets in 30% more UV light, which is fantastic for disinfecting the shed – things dry up very quickly. 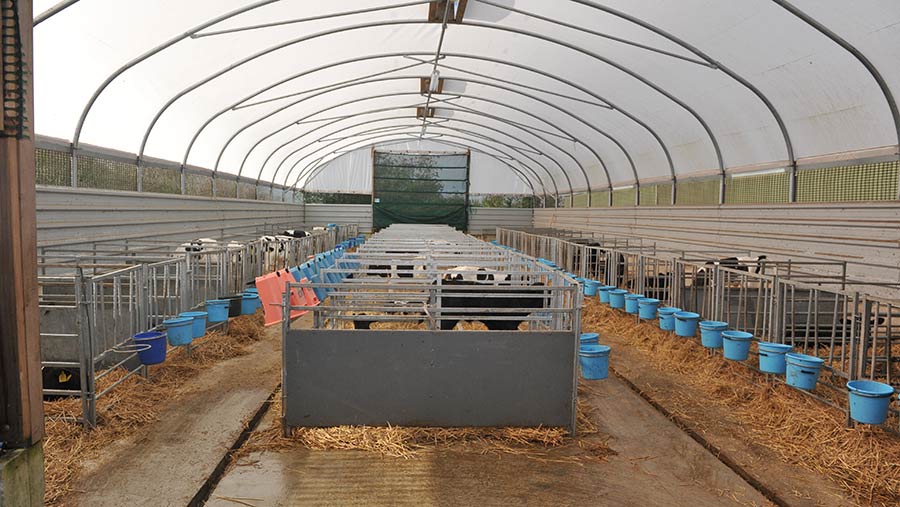 Did you make any modifications?

We picked up some tips on what to do and what not to do from a dairy farmer nearby who had a polytunnel.

One of the challenges he was having was with the height of the tunnel, which made it difficult to clean out.

To avoid this, I built a 0.6m-high concrete wall on the base of each tunnel and they sit on top of that.

I think they will last longer because the walls offer greater protection from damage. They give us more height for getting machines in and out, and the extra height is excellent for ventilation.

It made the polytunnels easier to install because they could be bolted straight into the walls and it also makes cleaning out easier because there is something solid to push against.

Allan Godber of AG Polytunnels. He is a stockman and has a really good understanding of how to create the right environment for calves.

In our case, he thought we should have more air circulating in our tunnels, so he made three ventilation slots in the ceiling of each.

Each polytunnel took a day and a half to put up and we used a local builder for the concrete work.

The tunnels were up by 15 October 2019 and, at that point, we had calves everywhere, so we were desperate to use them even though there was no concrete down on the floors.

We thought it would be OK for drainage but it got very muddy through the winter, so last summer we laid the floor and also got the electrics done. 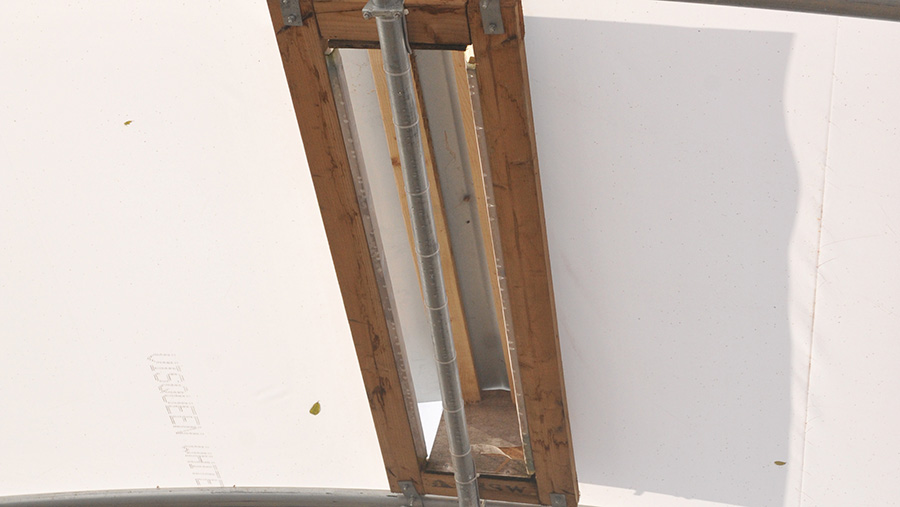 What is the drainage system?

We have four-inch plastic pipes with slots to let moisture in running down either side of both tunnels.

Above the pipes is a 5cm channel and moisture runs into this, escapes into the pipe and drains into our slurry pit. 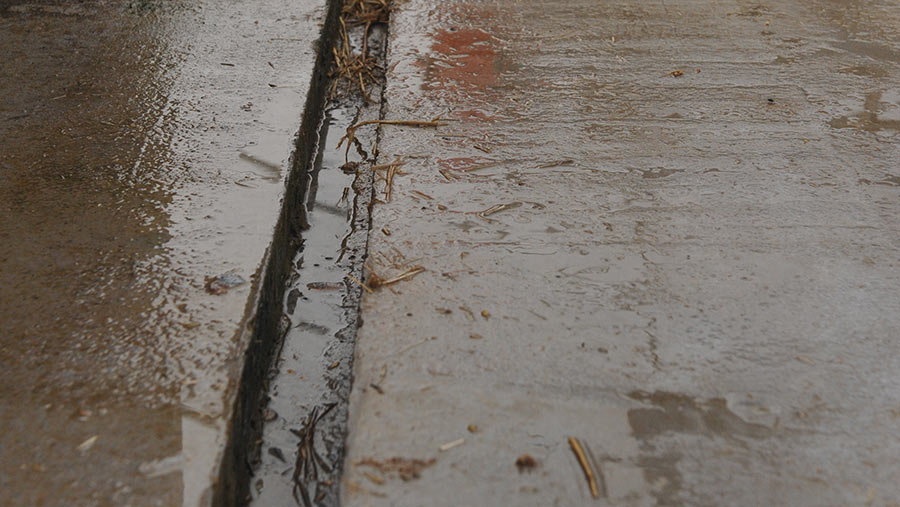 Was the aspect of the site important?

There was really only one place where the tunnels could go, but this was an area of land that needed clearing up so it gave us an opportunity to do that.

The site faces south-west, but we can control conditions inside the tunnels with gale breakers at either end; we can open and close these depending on the time of the year and the weather conditions. 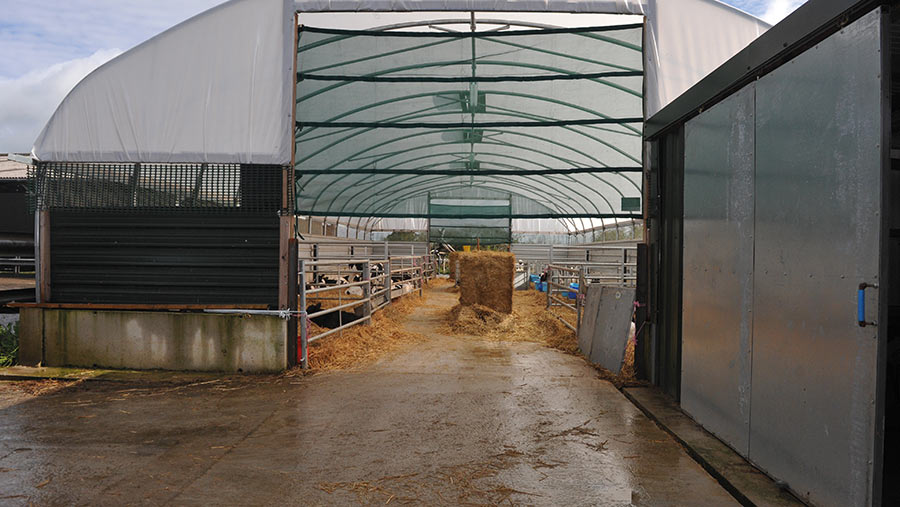 What is the best feature?

The amount of light they let in. There is something about calves having the sun on their backs, it is the next best thing to them being outdoors in the sunshine. 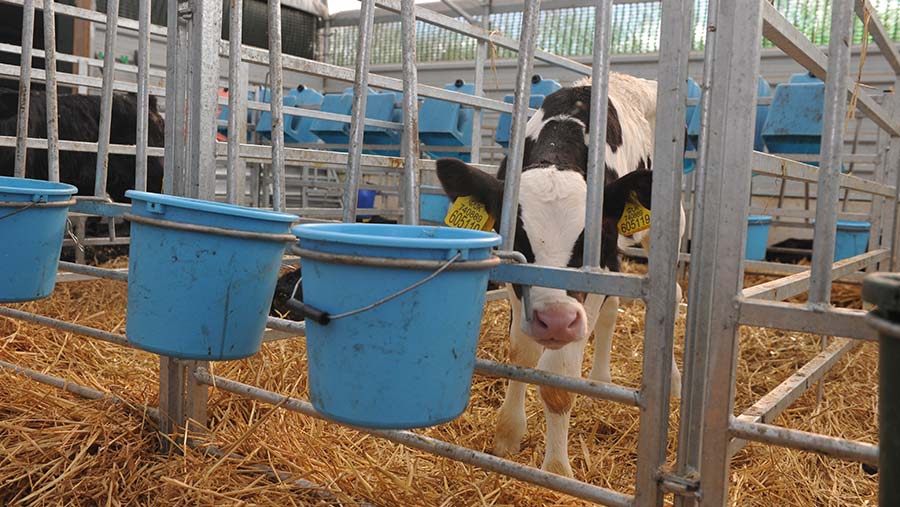 Have you seen an improvement in calf performance?

Before we had the tunnels, we might be treating a quarter of the calves for pneumonia, but this year we were seven weeks into calving before we had our first case. 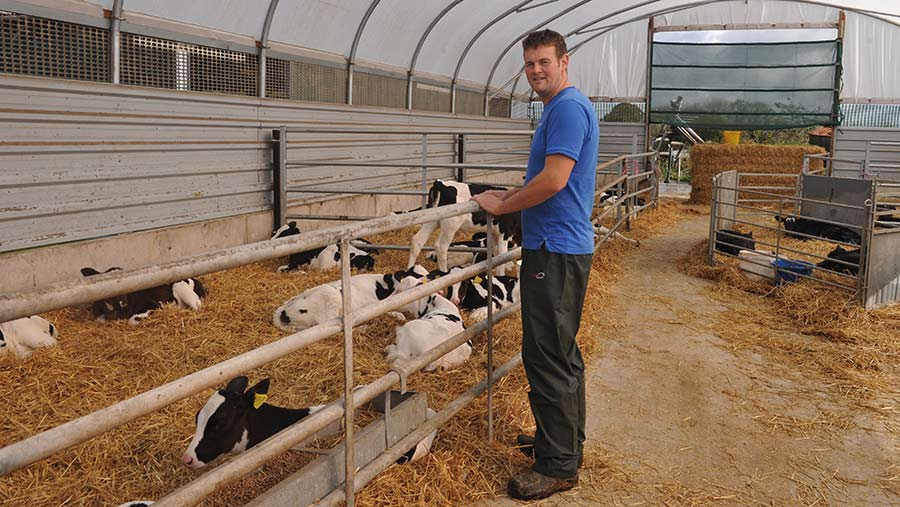 If I was being really fussy, I would have installed insulated sheets on the walls to stop the sun from radiating on to the sheeting, but we could double-skin instead so that is something we might look at.

I would advise this in a spring-calving system because of the warmer months. 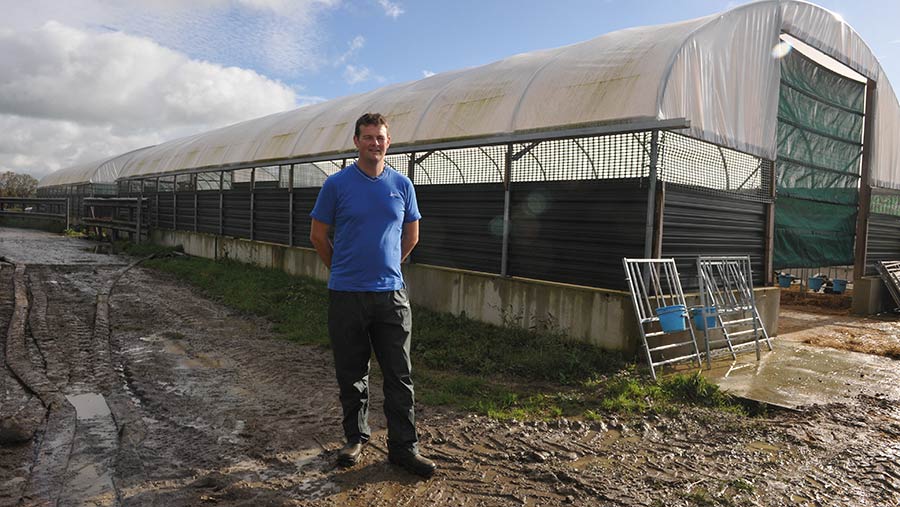 What would you have done differently?

Built the shed sooner. My advice to anyone who is considering converting to autumn calving is to make getting the calf housing sorted their first priority.

I would also have liked the tunnels to be 1m wider so that the passageways could be wider; this would make it easier for machinery access during cleaning out.

But the polytunnels come as a standard size and it is difficult to change those dimensions. 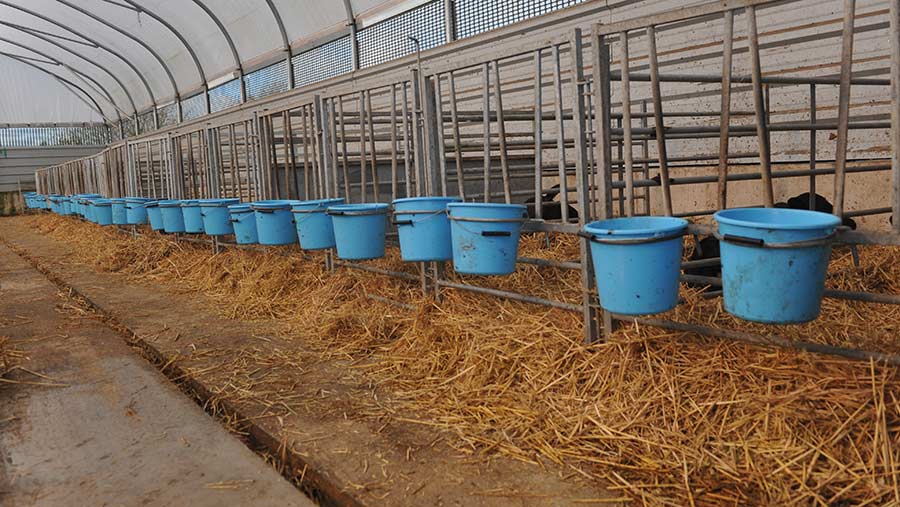 Have you created any additional features?

Dad built a storage room in the gap between the tunnels for storing the milk cart and milk replacer.

The milk taxi was expensive – it cost £6,500, but it holds 250 litres and makes the job of feeding the calves very efficient. 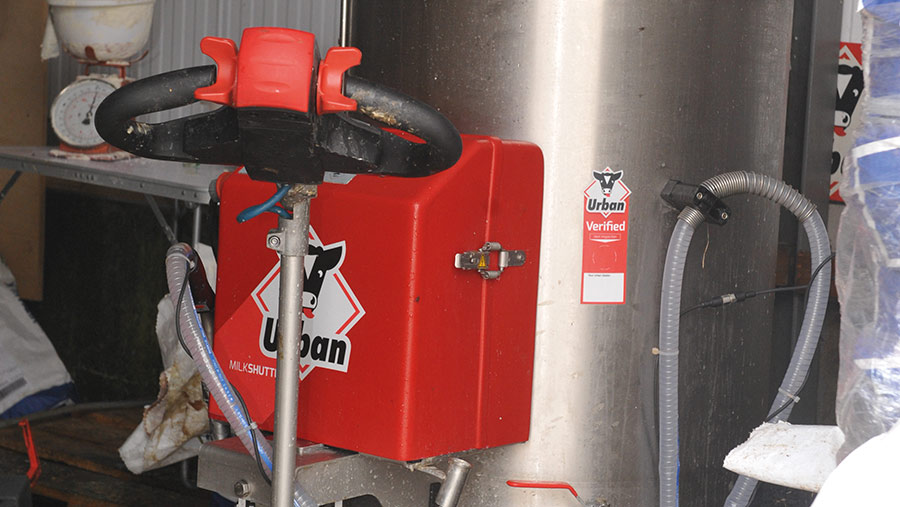 What do you anticipate the longevity of the tunnels to be?

Our supplier said he came across one that needed replacing after three years because it had been damaged by machinery, but also one that had lasted for 20 years, so it just depends on how they are looked after.

When it comes to re-sheeting it is not a big deal, all you need is a quiet day. You won’t get it done on a windy day though.