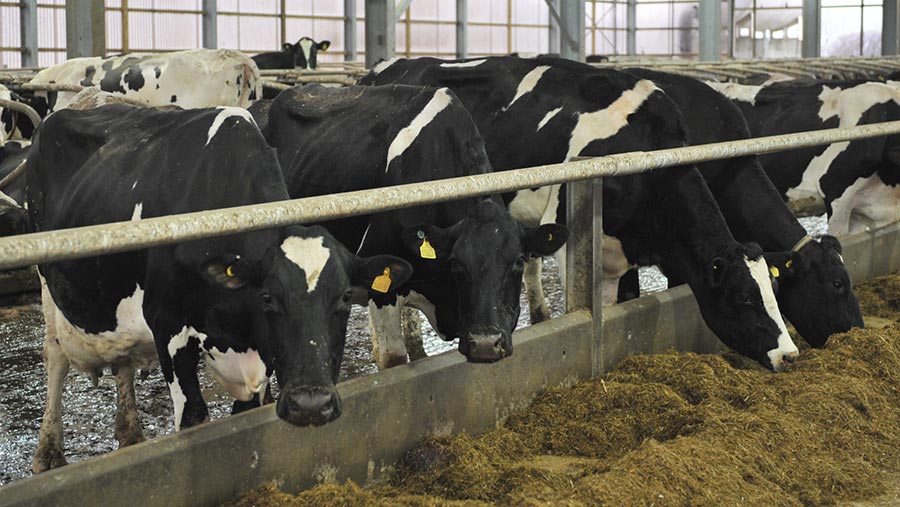 An automatic ventilation system capable of refreshing air in the entire building in just 90 seconds is one of the factors that has enabled a Welsh dairy farm to slash its antibiotics use.

For three years in succession, there have been just six cases of mastitis annually in the Allison family’s high-yielding 270-cow Holstein herd at Sychpant Farm, near Cardigan.

Central to the herd’s high health status is a US-style cow barn, built by the family to house milking cows. 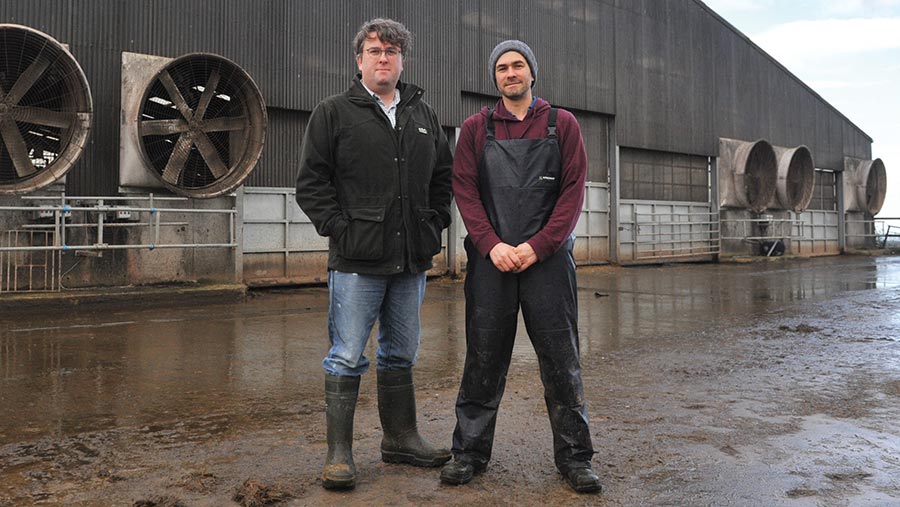 Brothers Marc and Tom Allison gave us a tour.

Why did you build the shed?

We commissioned a new dairy with a 16:32 Fullwood herringbone parlour in 2007 and gradually increased cow numbers and focused on improving herd genetics.

By 2012, we had outgrown our existing housing and slurry storage facilities and their design limited individual performance – the housing had small beds, poor lighting and foul air was less than ideal.

How did you design the new barn?

The farmyard is exposed, predominantly north-facing with a high rainfall level. The rain often comes with wind, so we were concerned about keeping the beds dry.

We wanted a flexible facility that would provide a consistent environment, irrespective of the weather.

We looked at a number of natural-vent barns, but were unconvinced this solution would work for us, as they rely on the stack-effect to refresh the air, and this is contingent upon occupancy and weather conditions.

If there aren’t enough animals in the barn, the stack-effect doesn’t initiate, and strong winds will unpredictably dominate the barn environment.

We decided to build a barn that would work equally well in winter or summer, as this would give us enormous flexibility to house some or all of the herd whenever we chose to.

In early 2013, we visited farms in the US to understand if a US-inspired design could work in Wales. While there, we met veterinarian Michael Wolf, who had been looking at barn environments from a cow’s perspective.

He shared research with us on ventilation, barn design and lighting levels. Marc designed our barn as a variation of what we saw in the US.

What are the shed’s specifications?

55x40m. The passageways are wide to provide plenty of loafing space for the girls to socialise.

We set up our own temporary concrete-forming factory to make precast walls that would be used on the side of the buildings, at the feed lane and the sand lanes.

We also built our own mouldings from which we could form a notched kerb along the cubicles. The notch works to prevent a wave from the flood-wash fouling the beds. 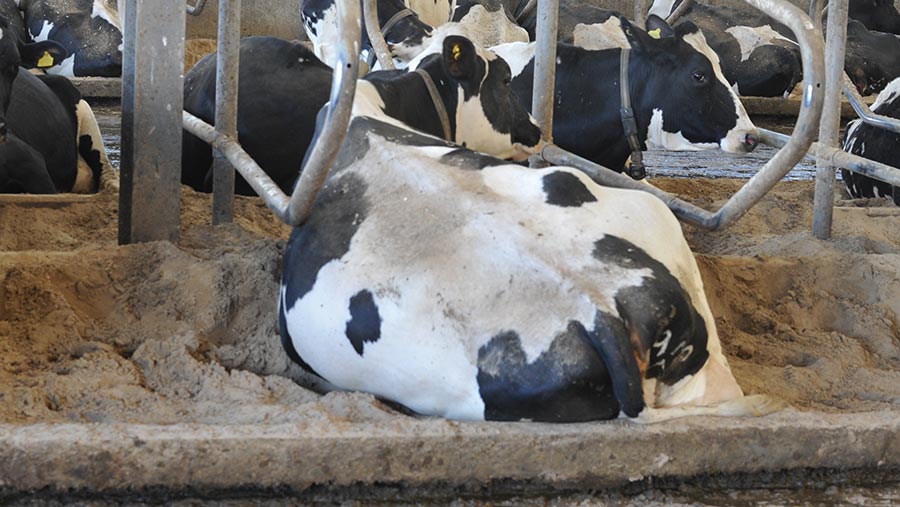 We also built our own automatic doors and feed barrier.

For the flood-wash we found some second-hand whisky tanks, which we mounted on plinths and sourced 45cm valves that could be activated by a motor.

As well as engineering the doors, my dad managed to mount motors to the flush valves and Tom worked out the controls. 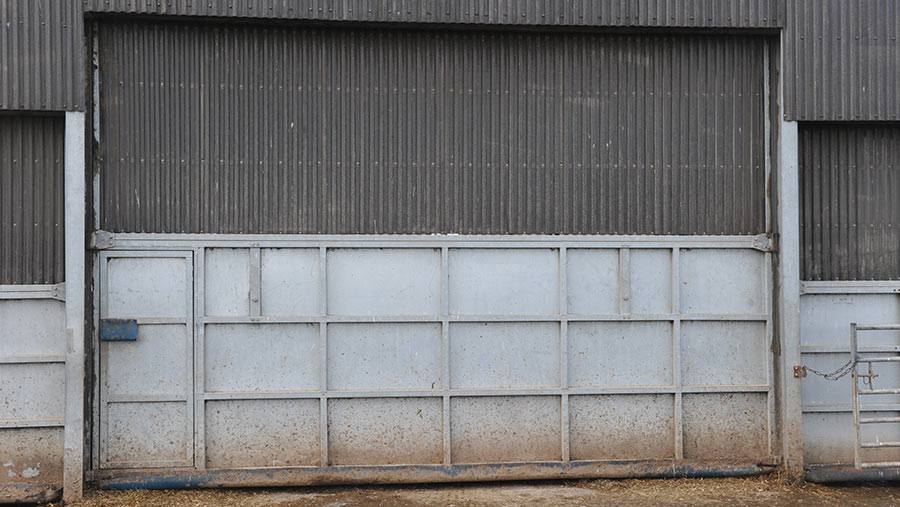 The sand bedding – it offers comfort and has helped drive down mastitis levels.

The sand costs us about 60p a cow each week. The beds are refreshed twice a week and we have designed lanes with a slalom effect to slow down the passage of effluent when the passages are cleaned, so the dirty sand can be collected to prevent it entering the lined slurry lagoon.

We dig out the sand with a loader four times a year and spread it on the land.

The polycarbonate side cladding, which is treated to prevent a greenhouse effect, because it allows plenty of natural daylight.

We have maximised this effect by limiting the concrete walls at the base of the side walls to less than a metre high, sufficient to protect the cladding when the cows are lunging.

The walls, together with 40 induction lights, expose cows to 16 hours of light in a 24-hour period.

Lighting systems have developed since we installed the lights, so we would now opt for LED because it can be dimmed and could be used on an overcast day, whereas with induction, they are either on or off.

The automatic ventilation system. There are four speed-controlled 182cm-diameter fans above the beds, so every cow place has consistent fresh air.

As the temperature rises, they run faster.

Even in the winter, the whole volume of air in the building changes at least five times every hour. 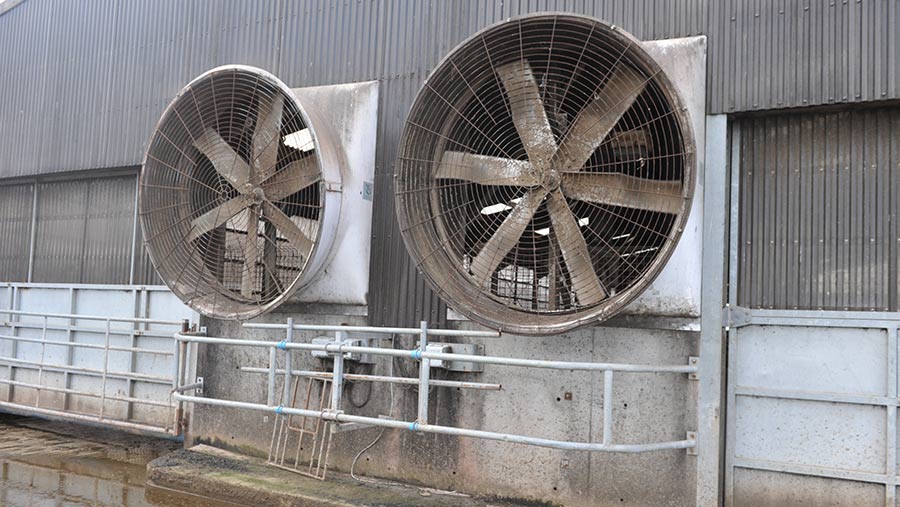 In the summer, we can exchange the entire volume of air in the building in 90 seconds.

The rainwater harvesting tank is not covered, so we have algae growth in it. Because the water is treated after the holding tank, the algae has at times blocked the filter, which can be quite annoying.

We would certainly cover the tank next time.

Our old sheds were bursting at the seams, the beds were too small, the buildings were dark and poorly ventilated and it was hard work to keep both feed and water troughs clean.

The new barn enables us to manage the herd as two groups, which suits our milking regime and allows some animals to be housed in summer, if needed.

In the milking parlour, we have installed a system that offers a gentler milking alongside a variable-speed milk pump and vacuum on demand, so milking times are very quiet and stress-free for the cows.

With all the changes the barn and milking parlour introduced, our yields have increased from 7,000kg to more than 11,000kg, while our milk quality is at 4.5% butterfat and 3.5% protein.

The cows pay the bills – the happier we can keep them, the more they will give in return. A lot of that is down to our staff, full-timers Matthew and Lee; milkers Hayley, Duncan and Gary; and part-time general worker Rhodri.