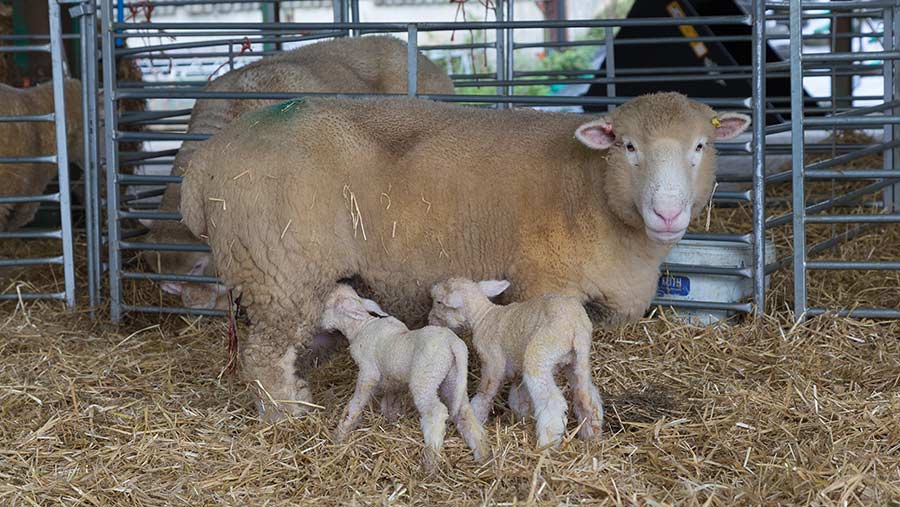 Farmer Duncan MacGregor says muck is important, but the key is getting animals on to the land.

“Grazing is not just about producing the best grass for the animals, it’s about maintaining the life cycles of insects that play an important role in protecting arable yields,” he says.

See also: What to consider when growing lucerne to graze sheep

Mr MacGregor and Leigh Nobes, farm manager at the mixed organic farm at Great Witchingham, knew sheep could play a valuable role complementing the grazing of their commercial sucklers and pedigree Shorthorns.

They had dabbled with Mules and Lleyns before landing upon the Dorset breed and had built the flock to 40 ewes by the time shepherd Fred Playford joined the farm three years ago.

“Dorsets are very versatile, because they naturally cycle year-round, so you can choose when you want them to lamb,” says Mr MacGregor. “Fred has done a great job integrating them into our farming system.”

The Dorsets had lambed on the farm in the December before 2018’s “Beast from the East”, and the harsh, snowy conditions hit the young lambs hard. Mr Playford was keen to move to an autumn system.

In 2019 the flock lambed twice, in March and November, with scanning percentages of 147% and 156%, respectively.

“Lambing three times in 18 months is quite a selling point for the breed,” says Mr Playford, “but we have a pinch point in the spring when cover crops are being pulled up to make way for spring cereals, and the permanent pasture is not yet growing. So, we’ve stayed with autumn lambing.”

There are now 120 breeding sheep,100 of which were mature enough to go to the ram earlier this year. The remainder went to the ram in mid-October for spring lambing and will then be brought into the autumn-lambing flock.

“We could probably run 200 ewes comfortably, so we’ll gradually increase numbers,” he says. “We bought 11 ewe lambs from two different flocks in the spring to bring new blood into the flock, but replacements will be home-bred from now.” 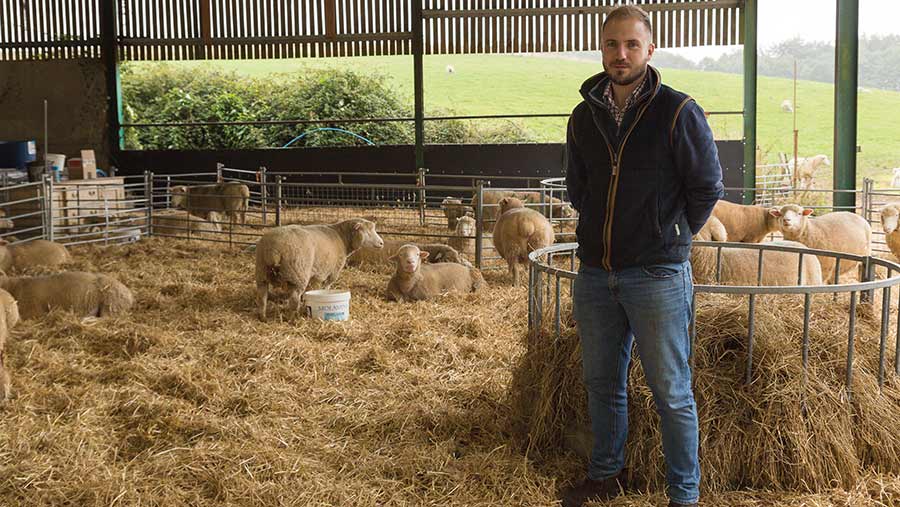 The flock is housed before lambing begins in the last week of September and fed on haylage.

They are in for around three weeks in all, mainly for convenience, says Mr Playford, and because performance recording is easier to do indoors.

He uses electronic identification, and the flock is recorded with Signet.

The ewes could lamb outside without assistance, and the lambs are very vigorous. Average birthweight is 5.5kg for singles and 4.6kg for twins, and rarely less than 4kg.

The ewes produce “so much milk” and colostrum quality is “brilliant”, he says.

Ewes and lambs move out to a nearby white clover and ryegrass ley, with access to the shed for water and haylage.

The ewes and lambs then lightly graze a first-year clover ley in the arable rotation, before moving on to cover crops, which this year have included more diverse mixes of mustard rape, oil radish, vetch, berseem clover and phacelia.

The ewe lambs are weaned later, at around 16 weeks, ewe body condition is not compromised by continued suckling.

“It’s very flexible, depending on ewe body condition score (BCS) and how much cover crop is available,” he says. “We often find that well-grown lambs will self-wean.”

The ewes dry up on previously grazed cover crop and barley straw. They feed on grass silage in the spring and move to extensive grazing in early summer.

Some of the original 40 ewes, now around five years old, are still productive. Any ewe not in lamb after two cycles is culled. There is zero tolerance to mastitis, and foot problems are dealt with on a two-strike policy.

Veterinary bills are almost zero. Regular faecal egg counts are used to monitor worm burdens, and only one anthelmintic drench has been used in the past two years.

As the sheep are on arable land from autumn to spring, overall parasite risk is low.

And if a Dorset ram is used on, say, a Texel ewe, the first-generation cross holds that ability to lamb all year round.

“They can also be used as a terminal sire – the carcass quality is incredible,” he says.

Dorset ewe lambs attract buyers for their docility and strong maternal instinct; their ability to hold condition in a range of settings – ewe BCS at Mill Farm does not fall below 2.5; and for the flexibility offered by all-year-round lambing.

Last winter, out of 80 lambs, only two were out of specification, and these were overfat because the lorry was late.

“I hadn’t had much involvement with Dorsets, and I thought you couldn’t beat a Texel, Suffolk, Charollais and so on,” he says.

“But I’ve not seen performance and carcass conformation like it. And they can finish off grass – we don’t feed any concentrates.”

This season, the farm is supplying Anglia Quality Meats, which uses the local abattoir, reducing transit times and food miles.

Why can’t all sheep breed all year round?

Most sheep are seasonal short-day breeders, and their reproductive cycle is regulated by the photoperiod, the amount of daylight in a day.

A shortening photoperiod in autumn and winter triggers the start of the breeding season for short-day breeding ewes.

The pineal gland, situated at the base of the ewe’s brain, responds to darkness by producing the hormone melatonin.

This helps maintain circadian rhythm and regulates reproductive hormones. The longer the night, the more melatonin is produced.

Dorsets, and some fine-wool breeds such as Merinos, are much less affected by the seasons, and can reproduce all year round.