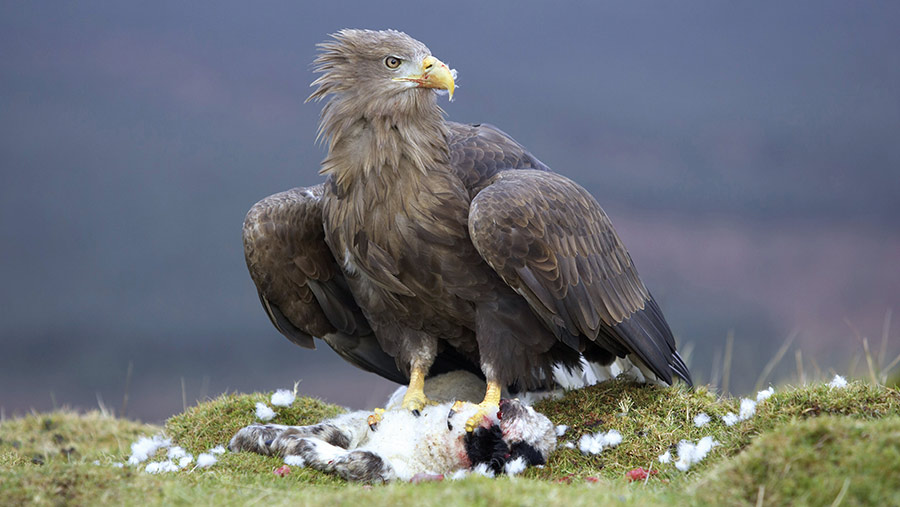 Every spring farmers and crofters in parts of Scotland face the unsustainable situation of white-tailed eagles preying on healthy newborn lambs to feed their young.

NFU Scotland (NFUS) has demanded that the Scottish government’s nature agency, NatureScot, now takes real and meaningful action to control the birds that have come to see livestock as a food source.

White-tailed eagles, also known as sea eagles, were hunted to extinction in the UK in the early 20th century, but efforts to reintroduce the iconic birds to the west coast of Scotland in the 1970s and east coast in 2007 have been successful.

RSPB Scotland estimates that there are now more than 130 breeding pairs in Scotland – and the population continues to grow and is self-sustaining. This number is predicted to rise to nearly 900 pairs by 2040.

Scottish conservation bodies argue that the white-tailed eagle, Britain’s biggest bird of prey with a wingspan of up to 2.5m (8ft), is a significant part of Scotland’s biodiversity and green tourism.

However, NFUS says farmers have suffered decades of predation from the birds and not enough is being done to address key issues and deliver the White-tailed Eagle Action Plan, led by NatureScot.

In a letter sent to NatureScot last week, NFUS called for a meaningful suite of actions to be rolled out across farms in areas that continue to suffer white-tailed eagle predation.

NFUS president Martin Kennedy says when the union entered into a joint agreement with NatureScot in 2014 promising action, farmers were optimistic that careful management of the bird’s population would create a balanced, sustainable environment for farming activity and the eagles to co-exist.

A number of non-lethal measures have been trialled on monitor farms to deter white-tailed eagles from stealing lambs, including diversionary feeding, such as salmon or deer.

Other methods have included inflatable scarecrows, reflective helium balloons, lasers and having people walk around hillsides.

What NFU Scotland wants from NatureScot

But NFUS says the progress seen on the ground has been “limited”, with farmers and crofters continuing to lose lambs and some recording substantial losses.

In its letter to NatureScot, NFUS highlighted key elements that need to be prioritised and progressed under the framework of the revised White-tailed Eagle Action Plan 2021-24.

In particular, the union believes licensable actions on birds that regularly target flocks “now needs to be a more accessible option”.

It says this should include NatureScot developing guidance to assess licence applications for nest tree removal; egg manipulation – including oiling and chick removal; adult removal and relocation; and, as a last resort to humanely kill problem birds.

“We are looking to NatureScot to demonstrate genuine commitment to making the necessary progress for farmers and crofters living with white-tailed eagles and we remain determined to support where we can,” says Mr Kennedy.

NatureScot says it understands the concerns of farmers and crofters and it will continue to work closely with them to offer management support and trial techniques that aim to reduce these negative impacts.

“The reintroduction of these native birds to Scotland has been successful and benefits tourism. However, in some locations, sea eagles impact farming and crofting by predating lambs,” says a spokesman.

The RSPB says it is a “complex issue”, which requires “thorough research and careful consideration”.

“While there is some localised evidence of livestock predation involving a relatively small number of white-tailed eagle breeding pairs, serious agricultural damage is very hard to establish in practice, and this subject is therefore not as clear cut as NFUS asserts.”

RSPB Scotland does not accept that lethal control or removal of some white-tailed eagles or their eggs would provide a genuine solution to livestock issues, Mr Orr-Ewing says.

“These birds will simply be replaced by other birds in the population, so other avenues clearly need to be explored.”

An extended action plan for the next three years is due to be published shortly, which aims to increase the understanding of the problem among stakeholders and provide solutions.

According to NatureScot, the scheme was revised in 2020, following consultation with farming and crofting representatives, to offer more flexibility and an increased level of support for those affected by sea eagle predation.

Last year, the scheme supported farmers and crofters through management agreements worth over £190,000, including new measures such as enhanced shepherding. 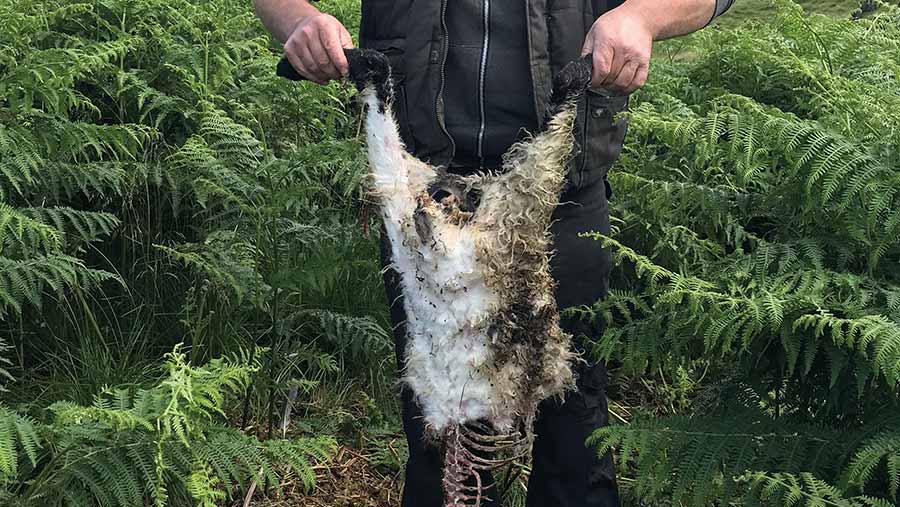 As one of the NatureScot white-tailed eagle monitor farms, Mr Colthart says 96 of his lambs were unaccounted for during the monitored period last year.

“I’m not saying the eagles were responsible for all these losses, but I would estimate at least two-thirds,” he adds.

Mr Colthart says there are too many white-tailed eagles near certain farms, including his own.

He agrees that while some non-lethal measures seem to have helped on one of the monitor farms – such as diversionary feeding – they haven’t on others. He believes NatureScot should look seriously at reducing numbers of the birds that habitually predate livestock.

“We’ve got a population density [of white-tailed eagles] that is probably too high for the natural food sources available.”

Mr Colthart says despite hours of NatureScot observers monitoring, the eagles have only ever been witnessed carrying a bloodied lamb once.

But finding lamb carcasses in the aftermath of attacks has convinced him the birds have become used to more people being present – and have adapted their habits.

“We think they’re probably coming in at the edge of light and into the early parts of darkness for the kill,” he says. “It’s an easy food source for them to make off with and feed their young.”

As the lambs get bigger, all that is usually left is a plucking site or they’ll carry them in smaller portions to the nest, he adds.

Mr Colthart says another monitor farm at Achnaba, North Connel, lost an average of 30 lambs a year between 2012 and 2018.

But in the years the birds were moved off, the lamb loss numbers returned to normal, at about five a year.

“The general public may not realise that white-tailed eagles are apex predators that were introduced back into an environment in some areas that don’t have enough wild food sources to sustain them,” he adds.

“If the public really understood the impacts on our flocks that we face they would maybe understand why we’re asking for more intervention by NatureScot.”

None of the 120 or so farms and crofts in the scheme is paid compensation for their lamb losses.

But they are able to apply to NatureScot for £1,500 of funding each year dependent on farm size or up to £5,000 for special measures such as enhanced shepherding to try and help some with the most serious impacts.

White-tailed eagles released on the Isle of Wight have been journeying across England and over the English Channel into France.

Natural England granted a licence to the Roy Dennis Foundation and Forestry England to release up to 60 eagles on the Isle of Wight over a five-year period from August 2019.

So far, 13 eagles have been released but three have died.

Trackers fitted to the birds revealed that one eagle, known as G463, crossed the channel on Tuesday 6 April.

Other eagles have ventured off the island to Oxfordshire, Buckinghamshire, Wiltshire, Herefordshire, Staffordshire and as far as North Yorkshire.

The National Sheep Association previously warned against the reintroduction of the birds, following “no real discussion or engagement with the farming industry” and concern about lamb losses in Scotland.