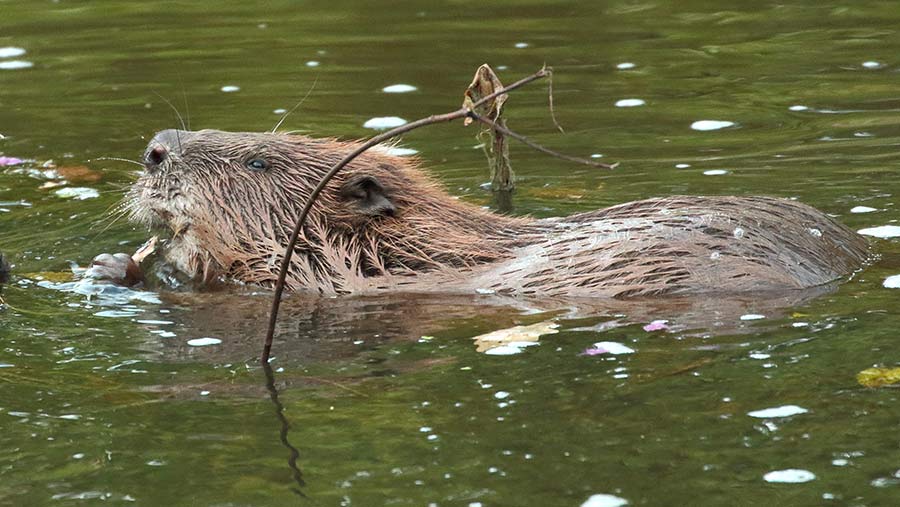 Hunted almost to extinction more than 400 years ago, beavers have gradually made their return to the UK. They hold protected status in Scotland and roam free in parts of the countryside south of the border.

Now, there are calls for the government to commit to a strategy that would see more beavers in more catchments across England.

It follows a five-year study of the animals in Devon, which concluded that beavers bring measurable benefits to society and the environment.

These include alleviating flooding, reducing pollution in water, and sequestering carbon in dams. The study also found that beavers create ecosystems that benefit other species.

The Wildlife Trusts want beavers to be an integral part of England’s green recovery and included in the government’s post-Brexit agricultural policy that will reward farmers with “public money for public goods”.

However, farmer concern lingers over the disruption beavers can cause to their land, by undermining riverbanks and protective flood banks and impeding drainage through damming, as well as damage to crops.

The Wildlife Trusts says financial support from the government for farmers and landowners who make space for water and beavers on their land, could help alleviate those concerns and help communities downstream, which will benefit from lower flood or drought risk and higher water quality.

In February 2015, Devon Wildlife Trust (DWT) was issued a five-year licence to release beavers into the wild.

The reintroduction followed the discovery of a group of breeding beavers living wild on the River Otter in east Devon, and a campaign by residents and others for them to remain.

The River Otter Beaver Trial (ROBT), overseen by Professor Richard Brazier from the University of Exeter, has been extended until the end of August to give Defra and Natural England more time to assess its findings.

The report (PDF), alongside the trial’s Beaver Management Strategy Framework, will help to inform decisions on the future of the animals in Devon and the status of beavers in England, including potential management and licensing approaches.

The framework stresses that management is essential to maximise the benefits beavers bring, and to help minimise any negative impacts on farmers and land managers.

Beyond the end of the trial it is unclear who would take on the responsibility, which is why the Wildlife Trusts is calling for government to clarify the legal status, licensing system and management regime for beavers in England.

Sam Bridgewater, conservation manager at Clinton Devon Estates, says this is vital to any future success for the beavers in Devon, and elsewhere in the country.

The estate owns 10,000ha, much of which is riverside farming land and Dr Bridgewater is part of the steering group for the trial, tasked with monitoring beaver activity on the estate.

“Ninety five percent of the time the beavers will be doing what they do, and you won’t even know they are there, but it is when something does happen, who does that person call? And what advice and support is there to help them sort it out and what financial support is there, or not?” he says.

The report found that beaver activity in five sites had impacted land drainage for agriculture on flood plains, necessitating the need for intervention.

“In one case the beavers built a dam and that started to push water on to the agricultural land of a tenant. The tenant told us, we had a dialogue with them, and they were quite phlegmatic about it.

“Partly because they had a big area of land and it wasn’t stopping their business model. It did waterlog another area, which had affected a potato crop, and we negotiated around that.

“We like to speed water on its way and beavers like to impound it, so you are going to get some pinch points.”

The area affected was 0.4ha, where elevated water levels restricted machinery access. A “beaver deceiver” – a wire cage-like construction that prevents beavers from damming up a stream or river – was installed on one site to reduce water levels successfully.

The device lowers the water level behind the beaver dam but allows them to continue to build it at their normal rate.

“For the whole course of this trial, if somebody found something awry on their farm because of beavers, they had a number to call DWT on, and they knew someone from the trust would turn up pretty quickly and they would sort it out,” Dr Bridgewater explains.

“And there would be both management advice and financial advice. After the trial, there is no clarity at all on who it is that person would then call and what support and advice would be available.”

The conservation manager, who joined the estate in 2012, understands that for smaller operations, farmers will want assurances if beavers are let loose in other parts of England.

“If you have got a smaller area of land that is super-critical if it gets impacted, you want to know you can go in there and do something about it fairly fast,” he says.

“That was always the fear that you wouldn’t be able to, that there would be some high level of protection that meant you couldn’t do anything.”

The Wildlife Trusts says the public’s excitement about beavers returning in England, and heightened support for the environment in the face of the climate crisis, makes it crucial the government lays out a strategy as soon as possible.

The coronavirus pandemic has understandably shifted priorities in Westminster.

“Until Defra makes that call, we don’t really know what is going to be in place. There are lots of other catchments and places looking to put beavers in and there is a worry it has all ground to a halt.

“From an environmental perspective they [Wildlife Trusts and environmental groups] will be saying this is a real opportunity lost, everything about public money for public benefit, natural flood defences – this is beavers in spades,” Dr Bridgewater says.

The report found that the beavers helped filter pollutants including fertilisers, manure and slurry from the river. The animals have also created areas of wetland habitat that benefit amphibians, water voles and wildfowl.

“We have definitely seen the amazing things beavers can do. We have a wetland that is actually holding back water.

“There may be some places where it might be more useful to have it as a beaver wetland, rather than what it was being managed for. In which case is our system efficient and good enough that you could actually then put this as part of some agri-environment payment scheme?”

Dr Bridgewater has spent time in Bavaria in Germany learning about projects that reintroduced beavers to the wild in the 1990s.

“Almost every other country in Europe has gone through this same process and they have managed to come up with a process to manage this. Some parts of Bavaria are really flat and have high flood risk.

“Does there need to be ongoing advice and financial support? I think there does. If you get that right, there is no reason why you cannot live with the beavers.

“But I think it is naïve to think there will not be problems and that is the lesson to learn from every other country – these are wonderful creatures, but they need management.”

He says the animals have not been a problem because of the careful management provided by Devon Wildlife Trust, but he does not want to see protected status for them in England.

“The trust has made the beavers accommodated where they are. They have been widely accepted here because they [DWT] have been tidying up behind them,” he adds.

“We don’t want a Scottish situation down here.”

Last May, beavers in Scotland were added to the list of European Protected Species of Animals, making it illegal to kill, injure or capture them. Shooting is only allowed under licence.

Farmers in Scotland have expressed concern that the beaver population has grown rapidly in recent years and the law now limits what can be done if beavers are causing problems on land, which is more likely in the future because of the population boom.

Alongside 230 dairy cows, Mr Lawrence’s wife Vicki runs a glamping business. which benefited from the huge interest in the beavers when they were first spotted on the river. “That was a positive for us, especially in the early years of the business,” he says.