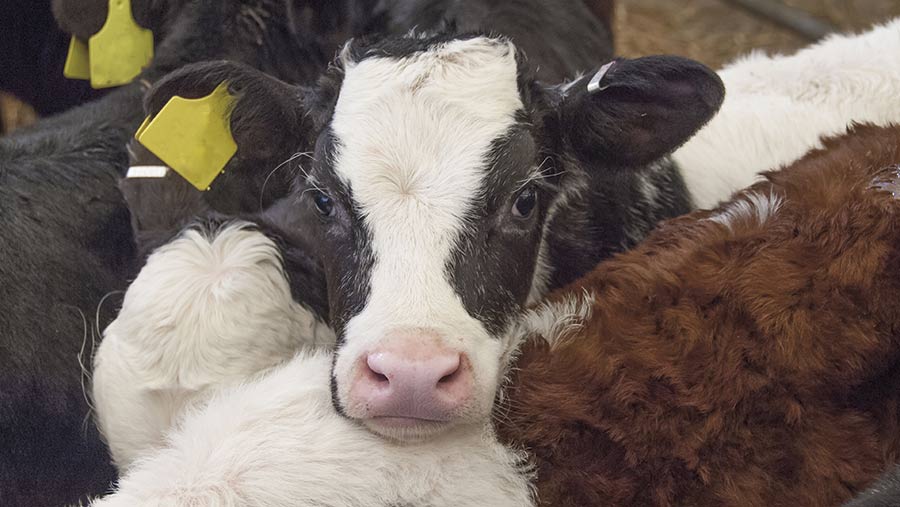 Rearing calf trade has remained remarkably strong and should stay buoyant as beef prices track closely to last year with prime steers at 200p/kg and prime heifers at 218p/kg.

Dairy cull cows are still regularly hitting 120p/kg and young continental-cross bull calves are averaging £250 at six weeks old. The view from the rostrum is that flying herds are often covering the cost of a replacement heifer.

Throughputs are expected to build into the spring and are at 60-70-head at weekly sales, down from 100-115 before Christmas.

Typically, half the calves are pure dairy calves, with the best bulls hitting the £140-£160 mark as 8-12-week-old weanlings.

“Calves aren’t seen as a by-product anymore,” says Mr Alexander. “They are given a good start. Some buyers aren’t put off by a good young calf, actually preferring them to moderate weaned calves as they have potential.”

Strong continental bull calves are selling for between £400-£500 a head, with Mr Alexander saying younger calves at six weeks old are a great trade.

“Some calves are making £420 at 12 weeks old but some vendors don’t take them on that far and instead sell them for £100 less at half the age.”

Despite a challenging winter and straw up to around £120-£130/t, Herefordshire calves remain a strong trade, although quality is paramount, says Will Probert, livestock auctioneer at Ross-on-Wye for RG and RB Williams.

Calf throughputs have been hit by a number of county council farm sales in the area and TB restrictions, which are keeping numbers to a select 20-30 calves at each fortnightly sale.

“I expect as grass comes this will firm trade in the months ahead.”

More calves are required at Penrith to meet a strong trade and good demand from farmers and dealers.

Fortnightly calf sales have seen 40-53 calves over the past two months but numbers lifted to 101 last week as Black and Whites levelled at £109.28.

This is according to Andrew Maughan who has recently had Aberdeen Angus heifers (over 12 weeks) through at £315 and £380 and weaned Angus-cross bulls to £490.

Meanwhile, younger Angus-sired heifer calves have been breaking the £300 mark, although the strongest British Blue weaned bull calves are selling from £325 to £450-£505 a head.

“With wintering costs higher we thought demand would have dropped a bit, but if anything we have more customers out now than before Christmas,” Mr Maughan told Farmers Weekly.