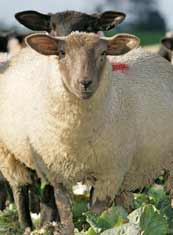 Sheep farmers wanting to take advantage of breeding for worm resistance and worm resilience should concentrate their efforts on the maternal breeds rather than the terminal sire breeds, according to independent sheep consultant Lesley Stubbings.

Importantly, resistance and resilience are different, she reminded deleagates. “Resistance occurs where sheep are able to limit parasite numbers, whereas resiliant sheep have the ability to perform well despite being challenged by high levels of infection.”

Speaking at last weekend’s Sheep Breeders Round Table, Stratford-upon-Avon, Ms Stubbings said the influence of terminal sires on their lambs ability to withstand internal parasite challenges was minimal because it took at least three months for either resilience or resistance to develop in lambs.

“This means commercial farmers need to be looking for replacement ewes with worm resistance or resilience. Ewes have a massive role to play in limiting the effect of worms on their lambs. Resistant or resiliant ewes can limit the number of worm eggs on pasture as they shed far fewer than non-resistant and non-resilient ewes.”

So, maternal line breeders, such as Blue Faced Leicester breeders have a massive role to play in developing the provision of replacements with resistance and resilience, she explained. “These breeders should begin recording for these traits in order to provide their customers with sheep which reduce the reliance on anthelmintics.”

Looking at more practical measures which sheep farmers could implement now to reduce the development of anthelmintic resistance Ms Stubbings said it was essential to remember that worm infections could reduce growth by as much as 50% before symptoms were visible. “And it is only once anthelmintics fail to kill 45% or more of worms that the drug failure will be noticed on farm.”

Where lambs have been grazing and been treated with anthelmintics older sheep, such as main flock ewes could be used to “reset” the worms on pasture, she said. “These sheep will dilute the population of worms on the pasture and hoover out a proportion of the worm population too, helping eliminate some of the anthelmintic resistant worms present.”

Looking further ahead Steve Bishop of the Roslin Institute said resistance was more achievable in the short-term, but resilience, was a longer-term goal.

“Resistant sheep are without doubt less affected by worms, but the immune response they use to up fighting worms means their are fewer nutrients available for animal growth. However, work conducted in Australia over the last 15 years has resulted in an 80% reduction in both faecal egg count and adult worms present in sheep selected for worm resistance by faecal egg count.”

However, selecting by faecal egg count is tedious and costly, he said. “Genetic markers are probably the better way forward. But it is highly possible that these will be breed-specific, so breeders need to ensure any marker developed works in their breed.”

Overall, Prof Bishop said both resistant and resiliant sheep offered some advantages and both would work for some period of time. “Worms appear to change slightly in both resistant and susceptible hosts, so there’s no evidence to suggest worms will adapt to overcome resistance or resilience, but they may do over time.”