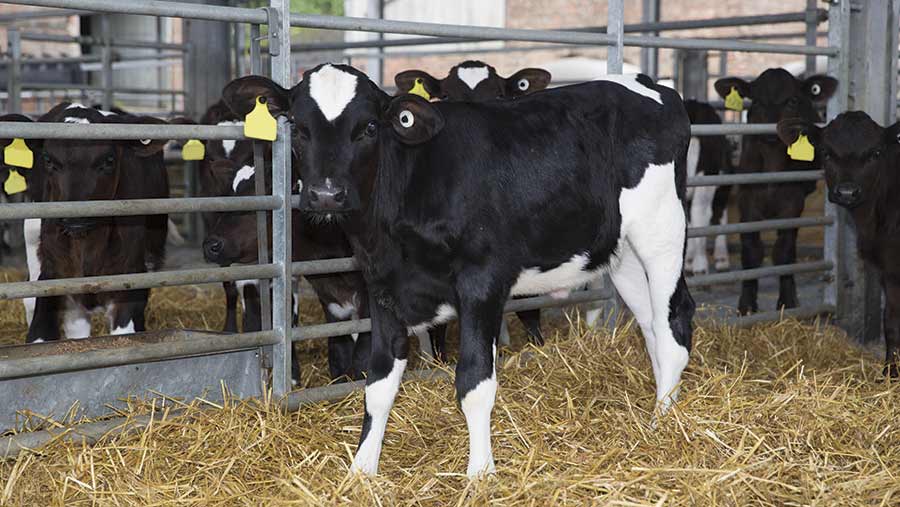 This was one of the topics raised at the recent Mole Valley Farmers Calf Conference in Exeter by US dairy consultant, Dr Bob Corbett and Dr Alex Bach from The Department of Ruminant Production of IRTA in Spain.

They highlighted the need for farmers to shift their attention away from feed cost per head pre-weaning and instead focus on return on investment.

Dr Bach said the case for investing in the milk feeding stage was clear. “Early in life you get 60% feed efficiency, so for every 1kg of feed or milk powder consumed, you get 600g of gain.

That explained why feeding higher levels of milk actually resulted in lower total heifer rearing costs in a study which looked at calving animals at 22 months of age, weighing 650kg.

The research showed feeding calves eight litres of milk a day in the first two months of age and achieving gains of 1kg/day led to total heifer feeding costs of €1,809 (£1,583) at 22 months.

Dr Bach said: “I don’t care if you have to put in a lot at the beginning, she’s still cheaper at the end.”

He also highlighted the significant positive impact faster growth rates had on future milk production. “For every 100g of additional daily gain in the first two months of life, you get 226kg of milk in the first lactation. So you get faster growth, she’s cheaper and produces more milk – it’s a free ride,” he said.

With that in mind, he emphasised the importance of providing calves with high levels of milk replacer early on.

He added: “We use the term accelerated, but there’s nothing accelerated about it. We’re changing nutrition so the calf reaches its genetic potential. It’s a matter of giving them the nutrition they need.”

At best, calves fed on a “traditional” system of a 20% protein/20% fat milk replacer (CMR) fed at 125g/litre across two litres, twice daily, would achieve daily weight gains of 225g.

This was way off the target 800g/day weight gains needed to achieve an age at first calving of 24 months.

He suggested the following targets: