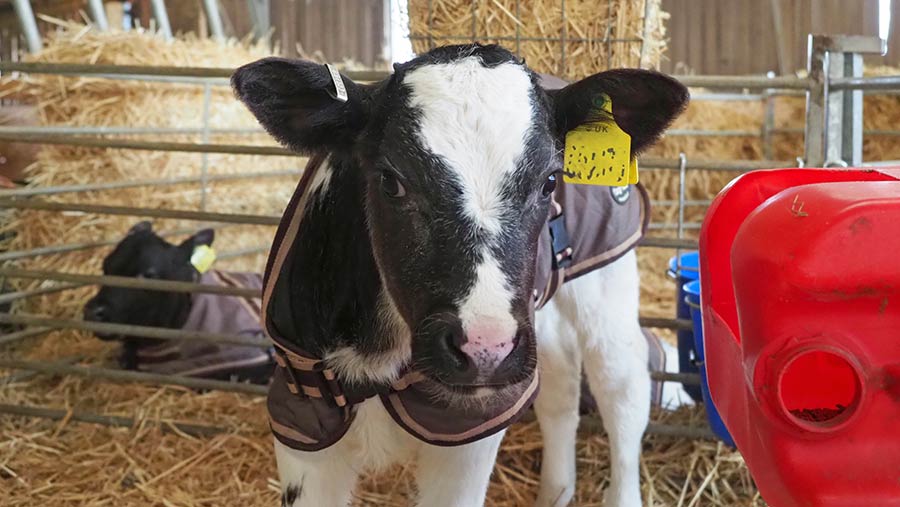 Father and son Derek and Adam Smith are keeping calf losses to a minimum by maintaining a closed herd, managing cow body condition and being extra vigilant at calving.

Their spring-calving suckler herd usually calves outside and in 2017 calf losses from calving to weaning were kept to just two animals (1.6%).

However, this spring, the poor weather forced the herd to calve inside and despite maintaining good standards of cleanliness and assistance, their loss rate crept up to five animals (4%), which both felt was too high.

With vet Ben Barber of Synergy Farm Vets, they measured colostrum transfer to calves to see if this was an area they could improve next year. Results showed one in five calves didn’t have sufficient colostrum, with records at calving flagging up that the majority of these calves had difficulty during calving, were larger than the average calf or were less thrifty.

As a result, they started using a Brix refractometer to measure colostrum quality from cows and providing it was good enough, they bagged and froze it to ensure they had a plentiful supply. The cow’s number was written on each bag so they could trace the colostrum back to the source if required.

Although calf mortality hadn’t been an issue in previous years ( less than 2%), Mr Barber says the study showed colostrum could be a limiting factor in the suckler herd.

Derek says the study taught them to tube calves that were at a higher risk of not consuming adequate colostrum, including those they knew had been through a difficult delivery or those that were larger than average. 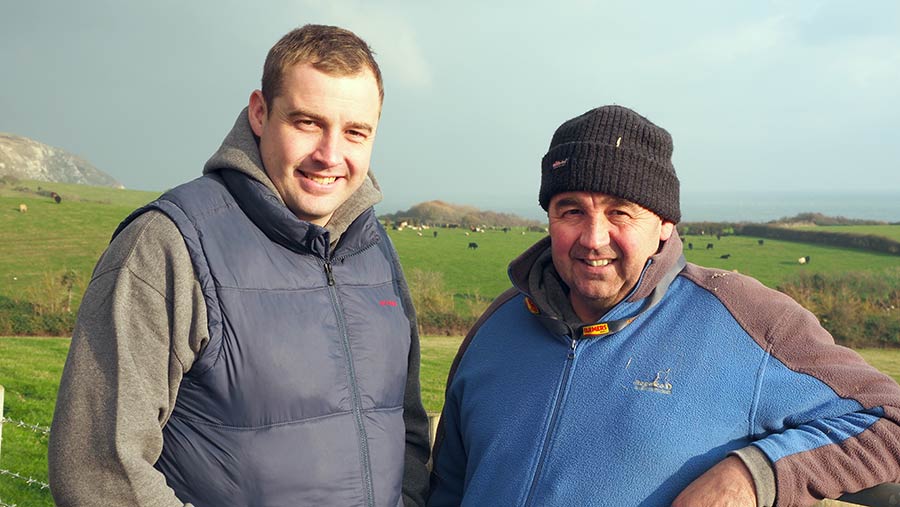 Alongside the suckler herd they rear 100 beef cross dairy calves. These are bought from a neighbouring dairy farm aged two week.

The beauty of this is that they know the disease history of animals, says Derek. Calves are bovine viral diarrhoea (BVD) tag-and-tested and the herd is vaccinated and monitored against BVD, leptospirosis and infectious bovine rhinotracheitis (IBR).

“We know the suckler herd is naïve, so it is important the calves are free from disease and they are managed as two separate groups,” says Mr Barber.

Calves are fed 900g of calf milk replacers twice daily and are weaned at eight weeks once they are eating more than 2kg of concentrate.

These are currently sold as stores, but have the potential to be finished on farm.

After being awarded a Leader grant this spring, Adam and Derek purchased EID and weighing technology and hope to use this to monitor weight gains and assess how close they are to finishing animals themselves.

Thanks to Zoetis, Volac and XLVets, whose sponsorship made it possible for us to run the Rethinking Cattle Performance workshops. Farmers Weekly had full editorial control of this report. 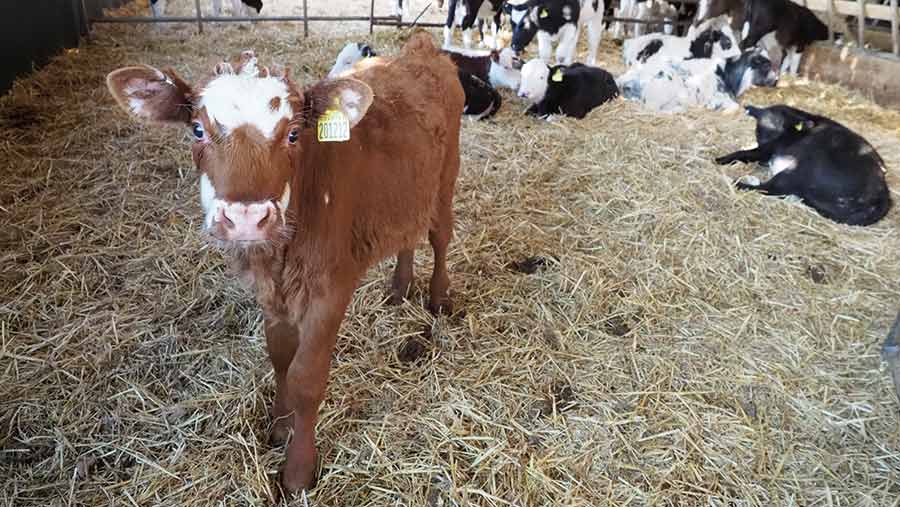 If calf mortality is above 2% from calving to weaning, beef farmers should work with their vet to review what could be causing it.

He showed attendees data from 40 anonymous suckler herds within the practice that calved in 2017 (90% were spring calving). It showed losses ranged from 0-14% up to weaning.

Mr Barber urged farmers not to ignore calf losses. Autumn can be a good time to assess certain aspects of spring-calving herd performance and should include a youngstock screen for infectious diseases, as well as monitoring the body condition score (BCS) of cows in order to intervene early, he said.

“Keep records at calving and look for patterns of both deaths and treatments. Which cows were the calves born from? Are individual cow factors such as BCS, age, udder and calving ease playing a part? Or is it a whole-herd problem?” 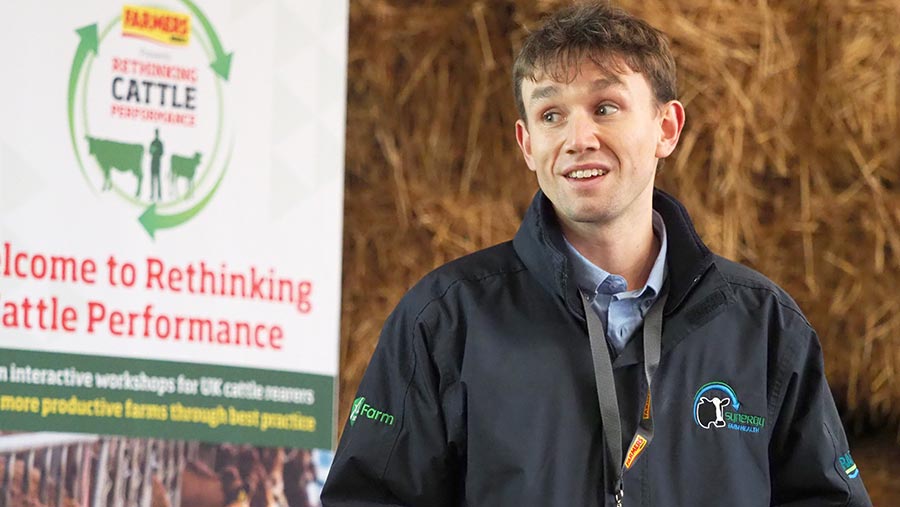 Colostrum contains antibodies and other important immune system goodies that calves are able to absorb through their gut.

This absorption is most effective in the first few hours of life and gradually tails off.

The process of receiving antibodies from the calf’s mother is known as passive transfer.

Blood sampling calves within two to seven days of calving measures the total blood serum protein, which indicates how much good-quality colostrum a calf has drunk.

An ongoing study by AHDB Beef and the University of Edinburgh compared colostrum intake in 1,320 calves across 92 farms in Scotland and England by taking blood samples of calves to highlight their antibody status. The study found 15% of calves had a failure of passive transfer.

1. If you think poor colostrum intake may be affecting calf health or mortality, ask your vet to blood test a group of calves to check for passive transfer.

2. If in doubt about a calf, intervene. This may involve leading the calf to its dam, using a bottle or if the calf won’t suck, tubing it.

3. Milking colostrum from the calf’s own dam in a crush and feeding it is the gold standard, but can be labour intensive. It may be better to keep a ready supply of colostrum close to hand. Cow colostrum is always best and can be taken from cows in the herd at a convenient opportunity, particularly those that may have lost their own calf. If the dam is still supporting her own calf, remember to leave enough colostrum in the cow.

4. Cow colostrum can either be stored in the fridge for a day or frozen for up to a year. Measure the quality of colostrum before freezing it using a refractometer to make sure it is worthwhile. The aim should be for it to measure more than 22% on the Brix scale. This should be thawed (not above 50C or you risk harming the antibodies) and fed at 40C.

5. If it’s not possible to harvest some, artificial colostrum replacers can be used. Remember these have consistently been shown not to have the same benefits and antibody levels as cow colostrum, but they are certainly better than nothing.

6. Be aware that obtaining colostrum from another farm poses a very high risk for the spread of disease. Even with farms that have a high health status, Johne’s remain a particular concern due to the difficulty of diagnosing the disease and the fact it can be passed from cow to calf though milk.

Zoetis, Volac and XLVets are committed to supporting UK cattle farmers in running enterprises that produce healthier, more productive animals. Part of this commitment means working with organisations such as Farmers Weekly on initiatives such as the Rethinking Cattle Performance campaign, to offer farmers the opportunity to learn from experts and their peers about the best ways to produce cattle, and particularly calves, as efficiently as possible.