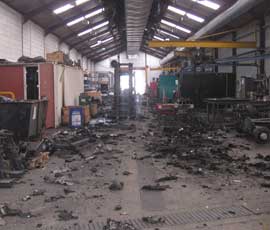 Cultivator and drill maker Sumo UK suffered a fire at its Melbourne, Yorkshire factory, on Wednesday morning. The fire started at 8.20am in one of the spray booths. The fire brigade was called and, at the height of the fire, there were nine appliances and 45 firefighters who brought it under control.

“The fire has resulted in all four spray booths being destroyed and the roof of one of our three fabrication lines being badly damaged,” says managing director Shaun Wealleans. “Thankfully, and most important of all, no-one was injured and all staff were accounted for.

“Our aim now is to minimise the effect on production of our machines. We have no painting facilities, so are currently looking at other premises and facilities to have this done.

“Our fabrication bays have been reduced by one third, which will also have an impact on the production. We are obviously working with our dealers and customers to prioritise deliveries to ensure machines are sent where needed most.

“While we cannot avoid the fact that for the foreseeable future deliveries are going to be affected by the fire, we intend to carry on as normal as we possibly can.”

Sumo confirmed that all forthcoming shows and events will take place as planned.