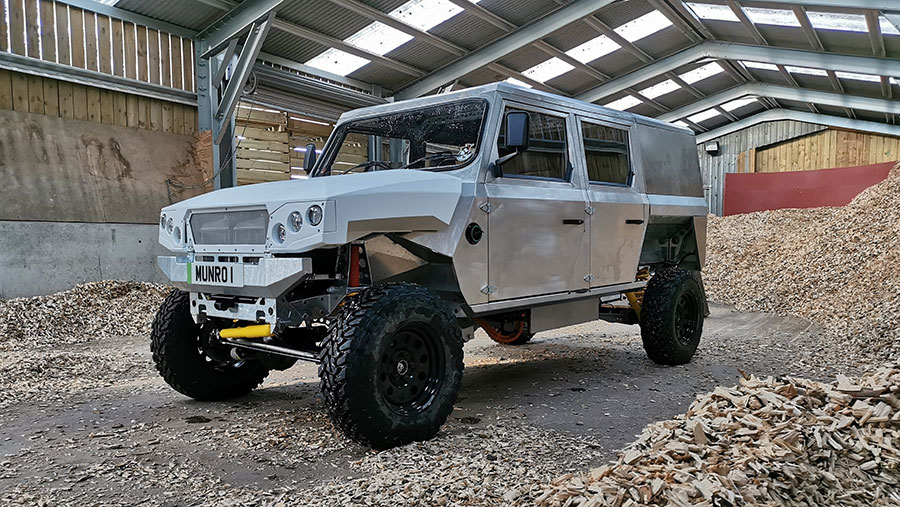 Scottish electric 4×4 start-up All Terrain All Electric (ATAE) has built its first prototype vehicle and is busy testing it in a range of environments before production starts in late 2022.

The firm announced it would be producing the utilitarian Munro electric off-roader in December 2020 and has spent the past few months perfecting the design and putting the pre-production model together.

Rather than going to the trouble of building a completely new vehicle, ATAE has opted to fit its electric drivetrain into an Ibex chassis and body.

This is built by Foers Engineering in Sheffield and features a fully galvanised monocoque clad with riveted and bonded body panels.

Various body styles are available, but ATAE has chose a five-seat double-cab version with a covered load bed at the rear.

To this the firm has added a battery pack and single AC electric motor that is coupled to a Land Rover LT230 two-range transfer box.

This gives it permanent four-wheel drive and a central diff-lock as standard. Power output is 215hp, torque is 350Nm and it’s expected to have a range of more than 150 miles to a charge.

Like the Ibex on which it is based, it will have a 3.5t towing capacity and 1.5t payload.

Battery packs are mounted to the underside of the vehicle, which keeps the centre of gravity low and allows easy access for maintenance or replacement as more energy-dense versions become available.

Charging on the test vehicle is 7kW, with a 50kW rapid option also built in, which will be increased to 100kW on production models.

ATAE is keeping the Munro simple, and the plan is to coat it in a tough, textured paint that’s both easy to apply and touch up if scratched.

It will also have cost-effective and practical wipe-clean vinyl seats. However, as the vehicles will be built to order, customers should be able to spec the finish to their liking.

A small run of more refined prototype vehicles will be produced over the next 12 months before production starts towards the end of 2022.

Prices are yet to be confirmed, but ATAE’s initial goal was to keep it near the £50,000 mark.

In other electric vehicle news, US maker Rivian is reported to have visited Bristol – along with some other EU cities – to eye up a potential 250ha site for building its electric pickups and SUVs.

If successful, this would be the first production facility outside the US, allowing it to better tap into UK and EU markets.

The firm is set to deliver launch editions of its R1T and R1S vehicles to North American customers in November 2021, with rollouts scheduled for other countries from 2022.

This puts it ahead of the Tesla Cybertruck and Bollinger B1 and B2, which are yet to have confirmed release dates.