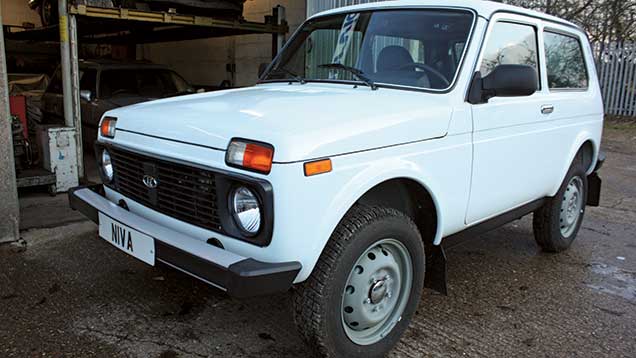 Here are two facts about modern 4x4s that are mightily hard to disagree with. One is that, with the exception of the Fiat Panda 4×4 and the Dacia Duster, they are expensive items to buy. The other is that they are as complex and multifaceted as a BBC2 Stephen Hawking documentary.

That’s all well and good but what if you want something moderately simple, sensibly priced and not likely to break down? The new Defender may well fit the bill, but so far we have no clue as to what that much-talked-about vehicle will be like.

So, in the meantime, which manufacturer’s product will suit? Step forward the £13,000 Lada Niva 4×4.

You may have thought that it had disappeared – and indeed it had for a while in the UK – but the Russian factory has been quietly churning them out at a rate of 1.2m a year. They started coming in again when importer Mark Key put them back on the pricelists.

He is now selling them into continental Europe. Meanwhile a new importer, Keith Norris at B&B Motors in Corby, Northamptonshire, has started offering the latest models.

One downside for many years is that Niva 4x4s are only available as left-hookers. That’s still the case, simply because the Lada factory will only supply right-hand models in batches of 500 or more. Fine if you’re a big importer, but B&B Motors is not in that league yet.

Having a steering wheel sprouting oddly on the left hand side of the dash might well be a problem if you do lots of long journeys and need to overtake slower vehicles, says Mr Norris, but for farming folk doing generally short runs between farm, local dealers, tyre factories and sometimes the school run, it’s not likely to be much of a problem.

So what changes have the Russians made to the Niva 4×4 in its lengthy absence from the UK? The answer is, er, not a great deal.

The bodyshell is still the same rounded, Fiatesque, comfy-looking shape that has weathered the years surprisingly well. It isn’t aggressive and doesn’t shout Look At Me like so many 4x4s. It just is what it is.

Of course, given that off-roaders have generally got bigger, taller and more aggressive-looking over the years, the Niva 4×4 now looks decidedly neat and compact. More Guernsey than Belgian Blue, you might say.

Looking for natty chrome inserts, alloy wheels and lovely chi-chi items created by over-perfumed designers? Forget it – with the Niva 4×4 you’ll get pressed steel wheels, old-school door gutters, and bumpers that can be simply unbolted and swapped for new ones if they get bent.

The side mirrors are big and non-electric, with a little manual knob to move them about. Old-fashioned, maybe, but if you take a whack from a badly driven local in a narrow lane, the cost of replacing the glass is £33 rather than the £300 you’ll have to stump up for a fully motorised and heated item.

The old-school theme continues when it comes to the engine. The Niva 4×4 has a 1,700cc petrol engine pushing out a modest 110hp and giving a top speed of 91mph and average fuel consumption of 33mpg. That may look a little thirsty at first, but probably not too far adrift from a LR Discovery with an auto gearbox and a keen driver.

A five-speed transmission keeps things simple and 4wd is full-time. There are no buttons to press and a pair of stubby levers lets you go into low-range and engage the diff-lock. Old-fashioned compared to many vehicles it may be, but there’s a glorious simplicity to it all. There’s also been a recent upgrade from Hardy Splicer joints to CVs, which should reduce driveline vibration and ABS is a new fitment, too.

Ground clearance is pretty good at 220mm but you may want to invest in a £150 wheel-arch liner if you go off road a lot and don’t want mud to splatter up the sides of the engine. Rubberware won’t cost you too much either with 185-76 16 tyres as standard.

As you’d expect from the land of bears, big beards and Vladimir Putin, this isn’t a car to cosset you too much. However the Niva supplies all you need and is a perfectly comfortable way to get from A to B.

Fixtures and fittings look much better quality than in the past and the strange shiny plastics and odd fishy smell that used to come with East European vehicles have mercifully been consigned to history.

In fact the Niva now gets a neat instrument cluster and a radio/cd is an option. There’s currently no air-con option and windows are still wind-up-wind-down jobs, but Mr Norris says that the new Niva Urban (due in January 2015) will have both.

There’s an immobiliser but no option of an alarm system and no central locking. That’s not likely to worry the buyers of the Niva 4×4 and means there’s no danger of having to shell out £120 when you drop your high-tech key in a puddle.

On this occasion, the only scope to drive was round the local industrial estate where B&B Motors is sited, but we’ll have a proper go with it in the next two or three months.

Having said that, you only have to be in the Niva 4×4 for about 10 minutes to get an idea of what it’s like. It’s a bit noisier than your average saloon, of course, and the controls are where the engineering department put them.

But it’s nippy, compact and good fun to drive and puts a smile on your face. Quite different from the ponderous, over-complex items that the 4×4 manufacturers like to sell us. And not at all like that Mr Putin…