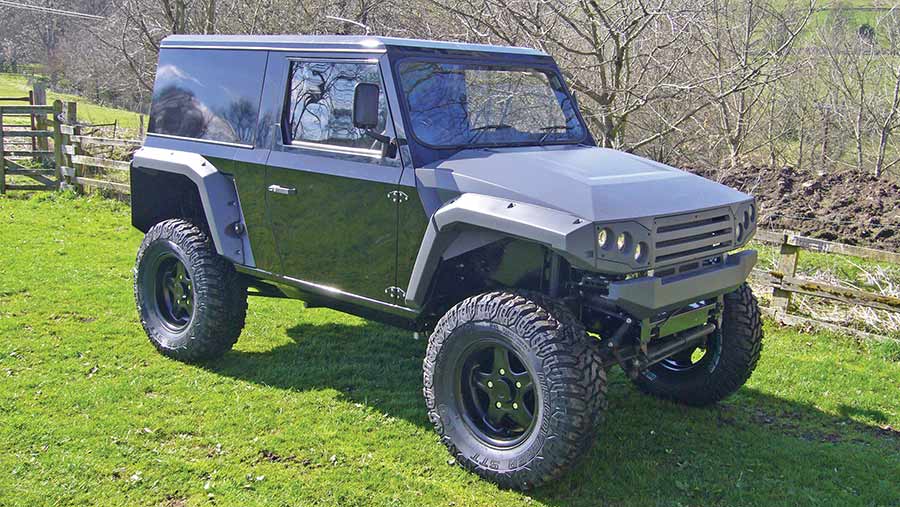 Since production of the original Land Rover Defender drew to a close, there’s been a dearth of options for those wanting a proper no-nonsense off-roader.

Many fans of the Solihull-built truck have been holding out hope that Ineos’ Grenadier will fill the void, but they’ll probably have been unaware that an alternative was already waiting in the wings.

Built in an unassuming industrial estate in the steel town of Rotherham, Foers Engineering’s Ibex is essentially a Defender that’s been on the protein pills.

Its sturdy ladder chassis and cabin monocoque is formed out of laser-cut steel plate and the folded aluminium body panels are riveted and bonded to the framework, making them easy to replace if pranged. 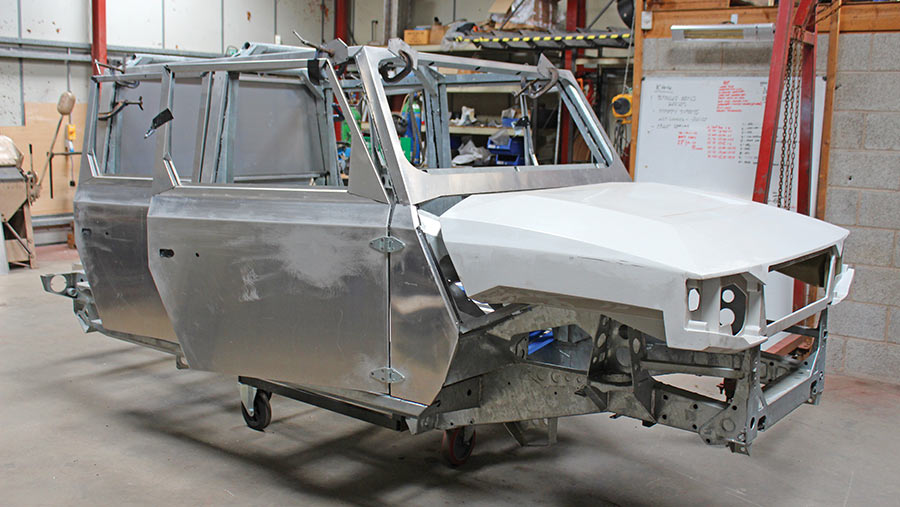 As for the drivetrain, this is a Land Rover-style, permanent four-wheel drive setup with centre and axle diff-locks, teamed with a manual or automatic transmission.

Power can come from a number of diesel and petrol engines and a pure electric-drive model is on the cards for next year. 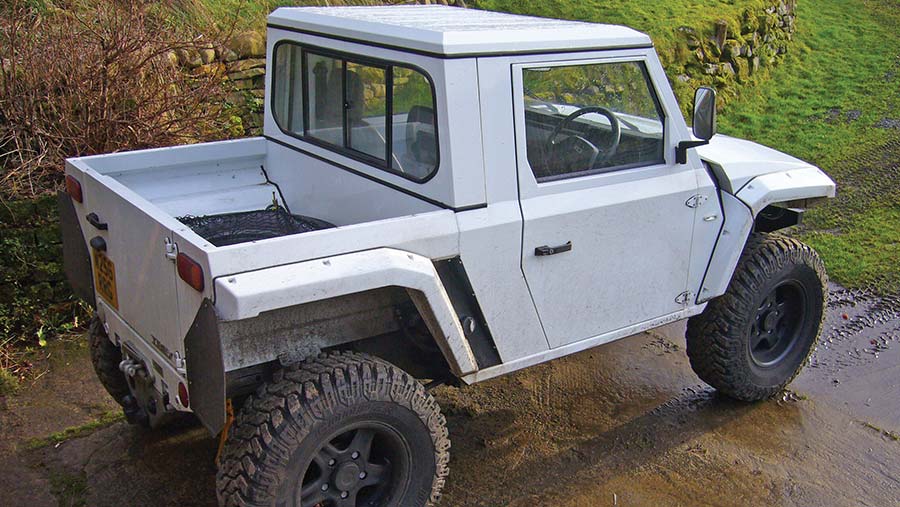 Most importantly, it can tow 3.5t, carry a 1.5t payload and comes in myriad configurations, including single and double-cab pickups, station wagons and even a six-wheeler. 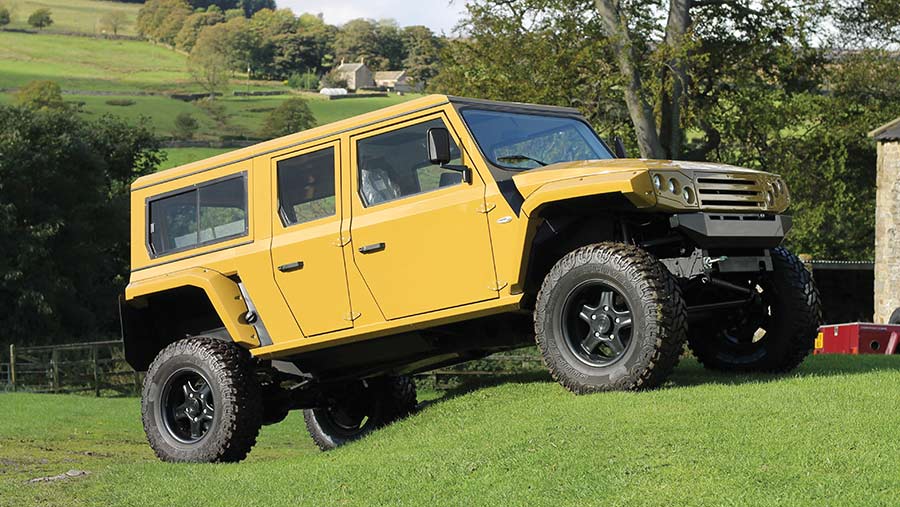 Unlike the Defender, or Ineos’ Grenadier, the Foers Ibex is a low-volume vehicle, meaning it’s never going to be built in large numbers. But for those looking for a custom-built, rugged truck, it’s an interesting option.

The current Ibex F8 is designed by company owner David Foers, who does much of the construction work himself, helped by a band of specialist freelance engineers and fabricators.

Vehicles start out as a pile of laser-cut steel profiles, which are welded together to form a one-piece ladder chassis and cabin superstructure.

Once completed, these monocoques are sent for hot-dip galvanising, before folded aluminium body panels are fitted.

These are located using pop-rivets, but the primary method of attaching them to the shell is a waterproof adhesive, which is also designed to prevent electrolytic corrosion between the panels and galvanised frame.

The adhesive works in a similar way to a car windscreen seal, meaning damaged panels can be removed by drilling out the rivets and using a sharp object to cut through the bond.

The bonnet and wheel-arch extensions are made from GRP and the bumpers are formed out of high-yield steel. 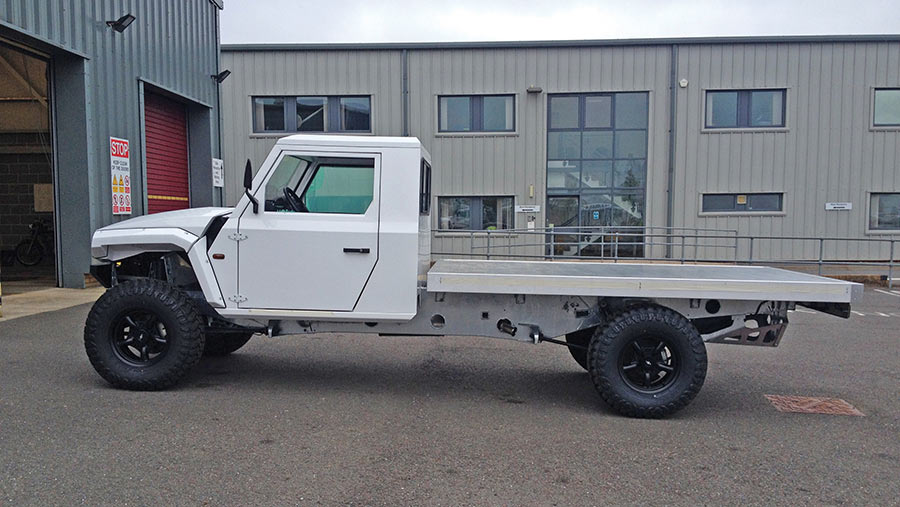 In all cases, most of the weight is kept between the wheels, and smaller models have zero body overhang.

With tyres sticking out beyond the bodywork on all four corners, these vehicles are able to drop in and climb out of steep, narrow ditches without snagging the bodywork.

Another of the Ibex’s novel features is its centrally mounted winch, which has cables running through the chassis to the front and rear bumpers.

This allows the vehicle to pull in either direction using a single winch, plus giving the option of dragging itself along the cable.

When it comes to putting a vehicle together, customers have the option of speccing brand-new components or using a low-mileage donor vehicle to source the engine, transmission and some of the running gear.

The second option is a fairly popular one, as it almost halves the build price.

A common engine choice for those seeking more modest performance is a Land Rover TD5.

New-builds receive a remanufactured version and those using donor parts can have this overhauled to improve longevity.

According to Mr Foers, it’s a reliable performer and is well able to handle being tuned to more than 200bhp.

“It should have a better reputation than it does,” he says.

“It’s strong, smooth and most of the common problems are related to the original ancillaries, which we don’t use.”

Some simpler builds use Land Rover 300 TDI engines, as they don’t require electronic engine management, and those looking for more power can use a 3-litre BMW diesel from the 330D. 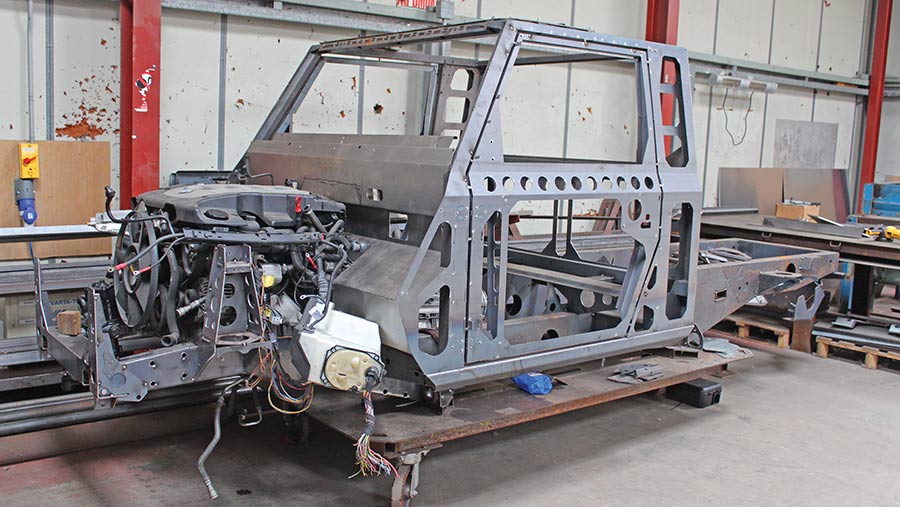 One of these engines is currently being slotted into a single-cab truck and it will develop 300bhp and 600Nm torque.

As for petrol options, most buyers are looking for added performance and will choose a V8.

In the past, Land Rover units were the most popular choice, but now Foers tends to use the more reliable and powerful Chevrolet LS3, which develops 430hp as standard.

Transmissions are usually those originally teamed with the engine and an adapter plate is used to connect this to the transfer case.

Work is already being carried out on a fully electric drivetrain, which will be launched in 2021.

This will use a motor attached to the transfer case, meaning the vehicle will retain its high- and low-range, centre diff and axle diffs.

It will be targeted at the working end of the spectrum, prioritising torque over horsepower, and has a modular design meaning it can be fitted into older vehicles.

This means buyers can purchase the vehicle with a diesel or petrol engine and then swap to electric as the technology becomes cheaper and more accessible.

Plans are also afoot for a range-extending diesel generator that makes it possible to tow heavy loads over long distances without worrying about rinsing the batteries.

The four-wheel drive system is centred around Land Rover’s proven LT230 transfer box, which, depending on the build, receives a number of upgraded, stronger components.

This gives the vehicles a permanent four-wheel drive system with high and low range and a manual locking centre differential.

Builds with more modest power outputs tend to be fitted with the firm’s own Land Rover-style axles, while higher-powered versions get heavy-duty Dana units.

In both cases, ARB air-locking differentials are fitted, with limited-slip units available on request.

Axle articulation is similar to that of a Defender in stock form, but this can be increased for those that want to tackle more serious off-roading.

Interiors can come in almost any trim level, from simple, hose-out bare metal with a couple of seats, to plush carpet, leather and fancy entertainment systems.

In most cases, buyers go somewhere in the middle, opting for a little more sound-deadening material and comfort than a Defender, while keeping it welly-and-overall friendly.

Until recently, the electrical system was based on modified Land Rover wiring looms, but the firm now has its own computer-controlled setup. 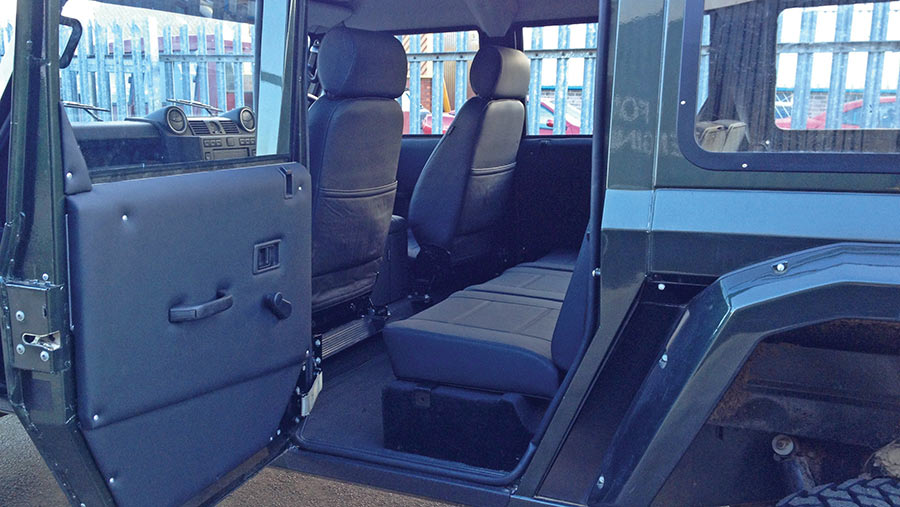 This sounds complex, but according to Mr Foers, it’s more straightforward and reliable than a traditional system.

Instead of a fuse board, all wires terminate in the touchscreen computer in the cabin and there are electric breakers that trip if there’s a fault.

All of this is sealed to prevent water ingress, and if there are any problems with the screen, it’s relatively simple to replace.

Prices for the first option can run to more than £50,000, but by sourcing parts from a low-mileage donor vehicle, this drops to about £26,000.

These vehicles can’t be given a new registration plate, but they are allocated an age-related plate that matches the donor vehicle.

Kits start at £7,250, and include chassis, body panels, glass, seals and hinges. It’s then up to the buyer to apply paint, fit the running gear and get it ready for the road.

It’s also possible to get a part-build, where some of the more involved jobs have already been completed.

Road tax is currently £270 for all models and insurance is said to be pretty reasonable. However, there are a few insurers that don’t recognise the vehicle.

Demand has increased in the past couple of years, so there is currently an 18-month waiting list for complete cars and kits. 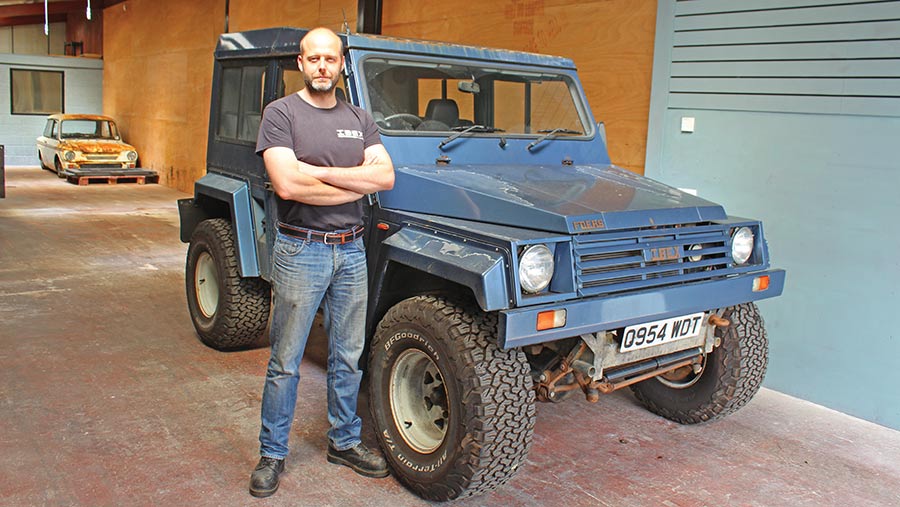 Foers Engineering was founded by David Foer’s father John in 1975, and he came up with the Ibex concept after realising there was a need for an off-road vehicle that could bridge the gap between a Land Rover Defender and an ATV.

The first prototype was built for a Scottish hill farmer in 1988 and is still in use today.

In fact, all Ibexes built to date are still running, apart from one stolen vehicle that was never recovered.

David took on the business after leaving his job as a vehicle developer for engineering firm Ricardo and the current F8 model – the fourth generation of the vehicle – is his own design.