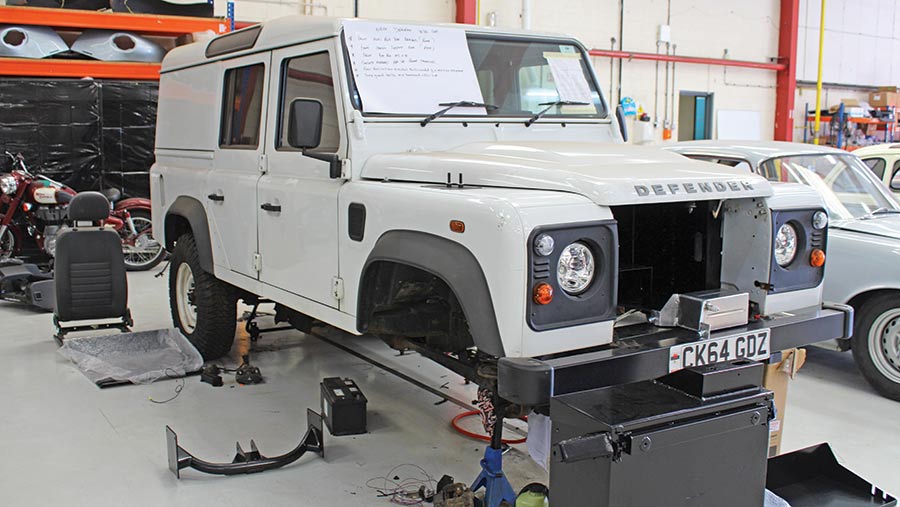 Tucked away on an unassuming Welsh industrial estate, a group of ingenious engineers has been busy injecting the 21st-century running gear of a 450hp Tesla into a lumbering Land Rover Defender.

Richard Morgan and his team at Electric Classic Cars have been converting period cars to electric drive for the past five years, but the Defender is their first attempt at a contemporary vehicle.

“Other than the ECU, Defenders aren’t that far removed from the usual classics we work on and that means they’re relatively straightforward to convert,” says Mr Morgan.

The ladder chassis and boxy bodywork offer plenty of scope for bolting on new parts and the lack of a complex Canbus electrical system means it’s possible to tap into the existing wiring. That said, the sheer bulk of these vehicles and the fact they need to tow requires a considerable amount of electrical oomph. 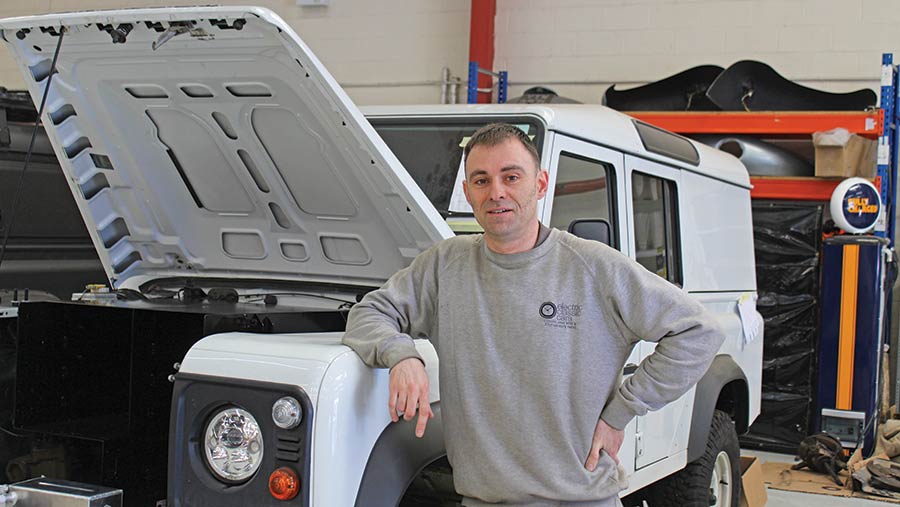 This has come courtesy of one of Tesla’s 450hp Model S 4×4 drive units which, like many of Mr Morgan’s other projects, was salvaged from a low-mileage write off. Surprisingly, there’s a ready supply of these, particularly from Norway where there’s already been a significant shift toward electric vehicle ownership.

With this in place of the usual 2.2-litre diesel, performance is sprightly to say the least. The stock 0-62mph time of about 16secs has been reduced to a hot-hatch-hammering 5secs and the top speed is considerably faster than standard at 120mph.

Apparently, off-road ability has been improved too, with the usual transmission and transfer box being replaced with a simplified full-time four-wheel-drive setup that runs through beefed-up limited-slip diffs. The electric motor delivers peak torque from a standstill so it can crawl along at very low rpm if needed.

Recommended towing capacity has taken a knock, though, as Tesla’s motors are only rated to pull 2.5t, rather than the vehicle’s original 3.5t. However, with circa 450Nm of torque available it should pull that 2.5t with ease and the capacity could increase on future versions.

The first part of the conversion process involves stripping out the engine, transmission and fuel tank. Unlike some other electric Defender conversions, Electric Classic Cars has removed the transfer box so there are no mechanical components between the Tesla drive unit and the prop shafts powering the axles.

Apparently, there’s a 25% efficiency loss in the transfer box alone, so removing it massively improves power transfer to the wheels.

Cleverly, the conversion requires no cutting or welding to the chassis or body and the Tesla motor assembly simply bolts in where the transfer box would have been, using a custom-made mount. 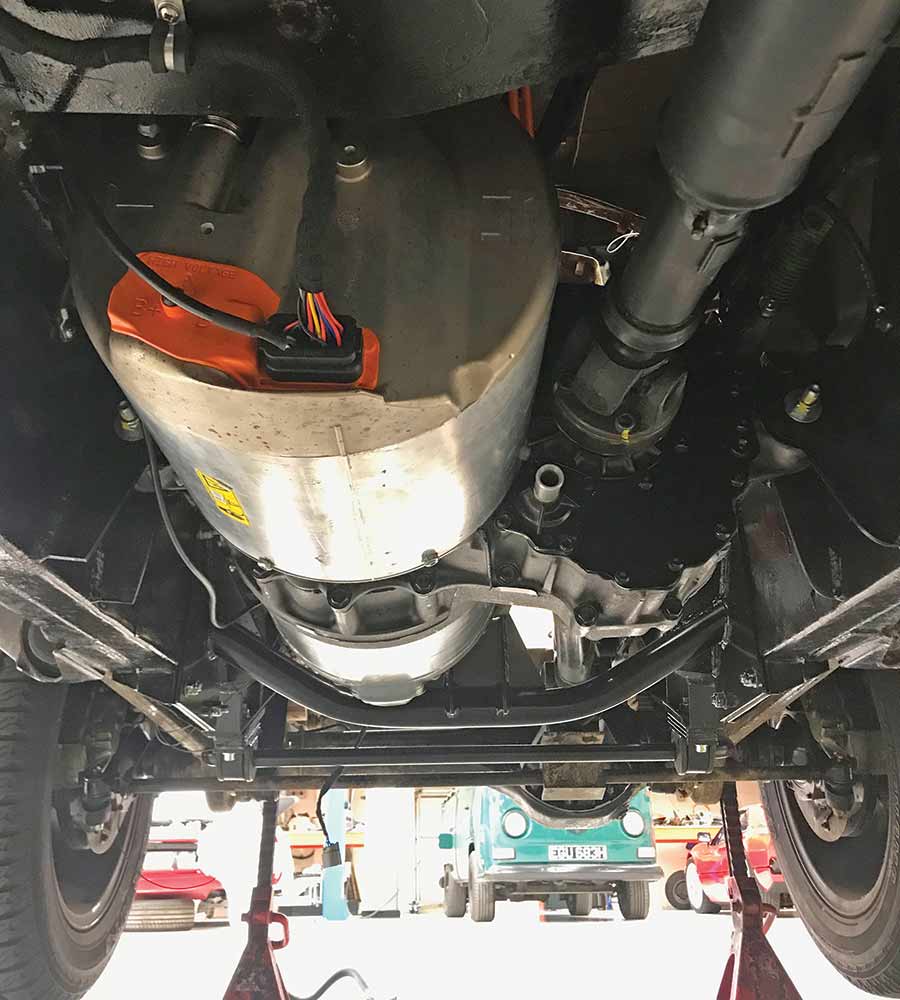 It’s orientated sideways, so that the front and rear prop shafts can be bolted straight on. In order to get the ratios right, a new set of gears were fitted in the Tesla unit, as well as a limited slip diff.

With 450hp on tap the Tesla motor would have been too much for the original axles, so these were rebuilt with heavier-duty parts and fitted with limited-slip diffs.

The result of this work is that the vehicle sits permanently in four-wheel drive and once the motor is switched on it will go from a standstill to its top speed of 120mph purely on the stroke of the accelerator pedal.

To achieve a range of around 150 miles, the Defenders have been fitted with 90kWh of Tesla lithium ion batteries.

These weigh about 600kg, so they have been split between the front and rear of the vehicle to ensure weight distribution is similar to the original vehicle. The main battery pack is housed in a steel box in the engine bay that bolts to the standard mounts, while the secondary pack is positioned where the fuel tank would have been. 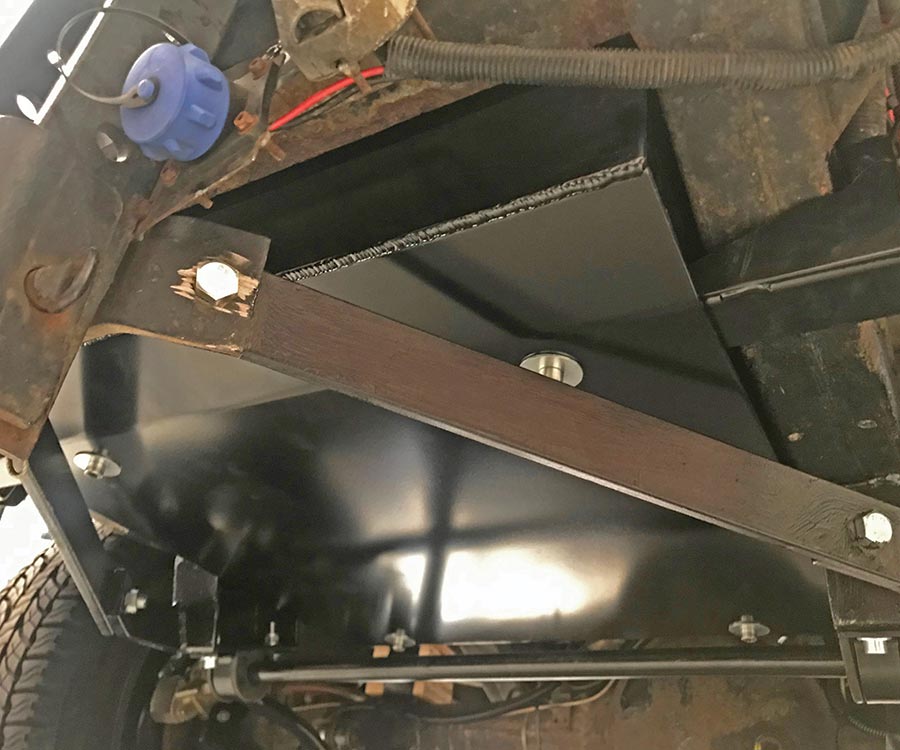 Very few structural modifications were needed to convert the vehicle

The battery boxes are comprehensively sealed, but as they’re not certified as waterproof, fording of rivers is best avoided. If water does manage to make its way in, the whole system is properly fused to prevent frying the occupants.

Various charging options are on offer, from 7kW to 22kW, the latter of which requires a home three-phase connection to reach its full potential. However, even a 7kW charger will deliver a full charge overnight. 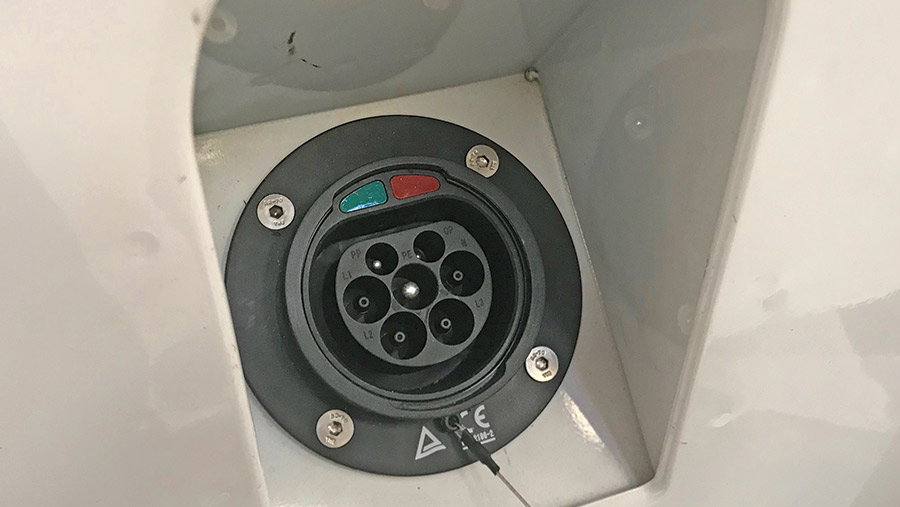 According to Mr Morgan, the fact that the vehicle can receive regular top-up charges whenever it’s parked at home or in a bay with a charging point means the size of the charger is less of a concern than people think. The expanding network of fast chargers means it’s relatively quick to charge during a journey, too.

“People just have to treat running an electric vehicle differently to a petrol or diesel and keep topping up, rather than using a full charge before plugging in.”

Richard Morgan has been a lifelong petrolhead, devoting his spare time to rallying cars and tinkering with them to make them go faster.

But five years ago, he packed up racing and needed another motoring-related hobby to keep him entertained. This came in the form of an old VW Beetle, which he set about making a lot sportier than standard.

In a change from tradition, he resisted the urge to install a bigger combustion engine and instead opted for an electric powertrain. “When I stepped on the pedal the acceleration blew my mind and from that moment on petrol was dead to me.”

After completing a couple of conversions for other people, he received sufficient demand to give up his day job and begin converting full time. He now employs 15 people at his workshop in Newtown, mid-Wales, and at the time of writing had 18 cars mid-conversion and 42 waiting in the wings.

The company is also featuring in its own TV series, which will be aired on the Discovery Channel later this year.

One of the trickiest parts of the conversion process is dealing with all the ancillary items that need to function without an engine.

These include the heater box, which has been fitted with an electric heating element to charge from the batteries. There’s also an electric power steering pump, electric vacuum pump for the brake servo and an electric handbrake – the original went with the transfer box.

A new EV dial cluster sits in the place of the original instruments and there’s a side panel that houses a new set of buttons: one for engaging the motor, a pair for selecting forward or reverse and a handbrake. A cover with integrated storage pocket sits where the gear levers used to be.

One of the most complex tasks was programming the battery management system (BMS), which as well as looking after the battery function, has to communicate with the car’s original ECU and convince it to function without an engine.

The high price of donor parts and the amount of labour involved in these early conversions means they’re far from cheap.

All in, costs run to about £75,000, which doesn’t even factor in the price of the original vehicle. However, these prices will come down over time and Mr Morgan is working towards making it a bolt-on kit, which will significantly reduce the workload.

It’s never going to be a cheap option, but the lower running and maintenance costs go some way towards offsetting the investment. The brushless AC motor is also likely to outlast the vehicle and the battery packs are expected to offer at least 80% of their original performance after 130,000 miles.

Electric Classic Cars is not alone in the business of grafting electric drivetrains into Land Rover Defenders.

It’s teamed with a 85kWh battery pack that offers a 160-mile range and has an integrated 22kWh charger. Unlike Electric Classic Cars’ Defender, Plower retains the original transfer box and axles. It costs €75,000 (£66,370), not including the donor vehicle.

Polish firm Innovation Ag also has a conversion called Falcon 4×4. It uses a 300hp motor with 500Nm torque and an 85kWh battery pack.