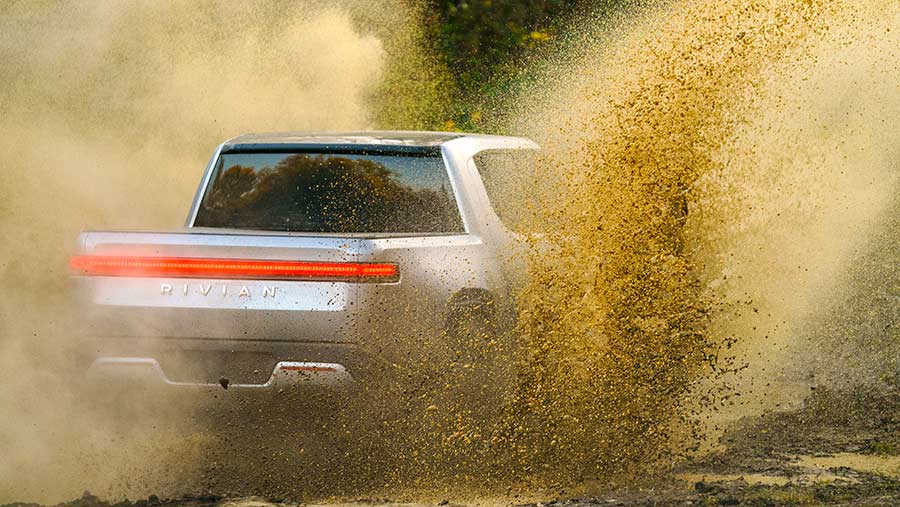 Diesel takes a bit of beating when it comes to powering off-road vehicles and hauling heavy trailers around the countryside.

It develops high torque at low revs, has relatively low CO2 output, and with pumps dotted around the globe, it is also mightily convenient.

But commendable as these credentials are, its smutty ways mean we have to accept that it’s not going to be around forever.

The government’s Road to Zero strategy plans to ban the sale of new diesel (and petrol) cars by 2040, and it has a number of other measures planned to phase them out before that date.

Details of what will happen to diesels purchased up until that cut-off are a little more vague, but it’s fair to say there will be penalties for owning them.

If current trends are anything to go by, many of the trucks being driven now will have moved on to a new life as a toaster or energy-efficient freezer by then.

But for those that are still on the road, there will undoubtedly be options – one of which could be switching them to electric drive.

Until recently, that would have meant taking a serious swipe at their performance ­– Land Rover’s prototype electric Defender, launched in 2013, developed a paltry 94hp and had a range of just 50 miles.

But now the technology is in place to give performance rivalling the original diesel engine or, in some cases, better it.

Admittedly, range and charging times are still a little limiting, but these are improving all the time. 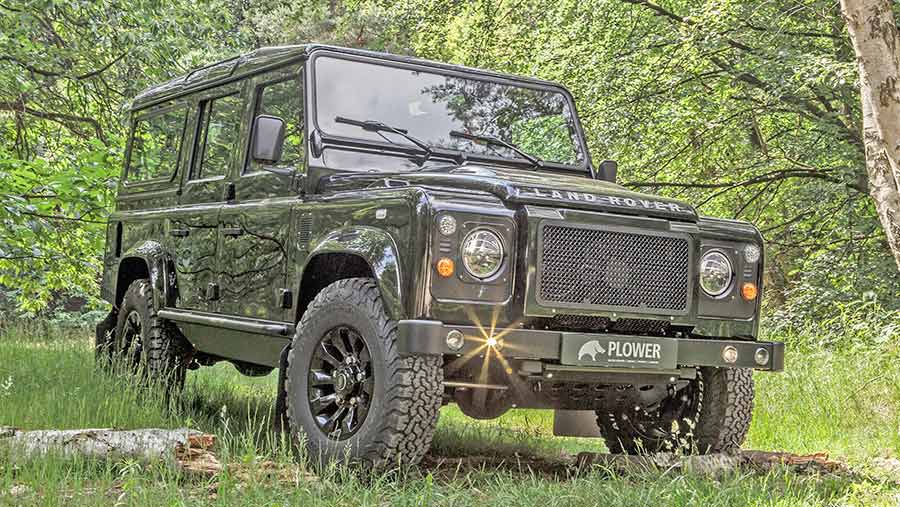 Some 70% of the Series Land Rovers and Defenders produced to date are still on the road, and by that token there will be plenty ripe for electric conversion when the time comes.

There are already a few hand-built, electric-drive models around, but Dutch company Plower has come up with a high-performance kit that’s ready to slot into any Defender model, be it a 90, 110 or 130.

At the heart of the setup is an AC motor powered by an 85kWh battery pack, which together provide a power output equivalent to 214hp and 380Nm torque. 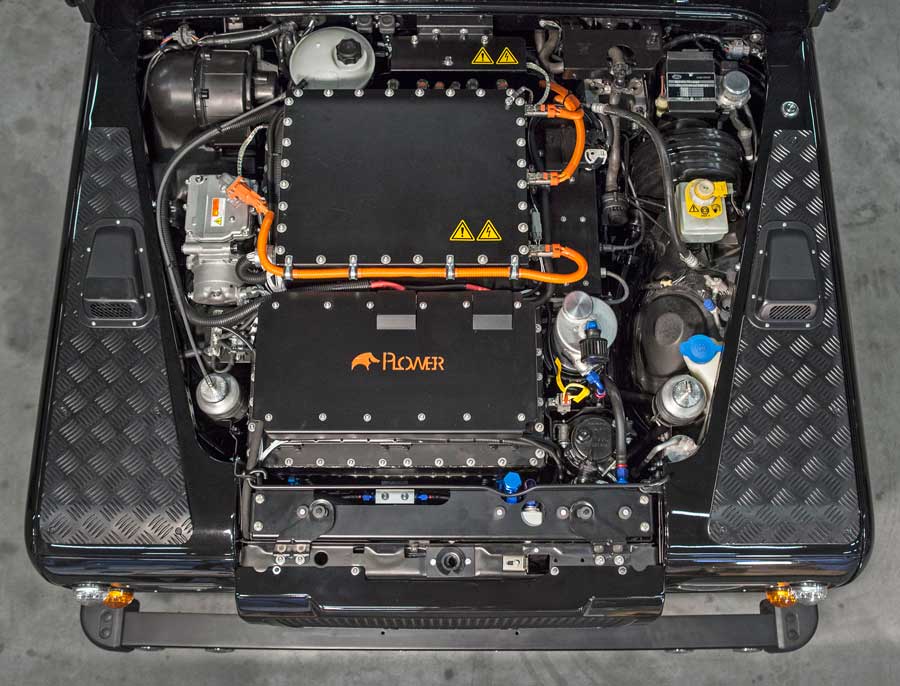 The range of the current setup is about 160 miles, and the integrated 22kW charger will get a near-flat battery up to full charge in about four hours.

However, times are considerably faster when batteries aren’t dragged below 20% charge.

Quicker chargers and bigger battery packs are in the pipeline, too.

But in order to get enough low-speed torque, the Land Rover gearbox has been replaced with a fixed-speed reduction unit.

By using submersible battery packs, Plower has also managed to achieve a 800mm wading depth, which is better than an unmodified diesel.

At €75,000 (£66,370), excluding the donor Land Rover, the conversions don’t come cheap. However, this is a high-end, bespoke vehicle made in relatively small numbers.

Plower is planning to offer the conversion service to UK customers, but the vehicle will need to be taken to its workshop near Amsterdam to have the work done. 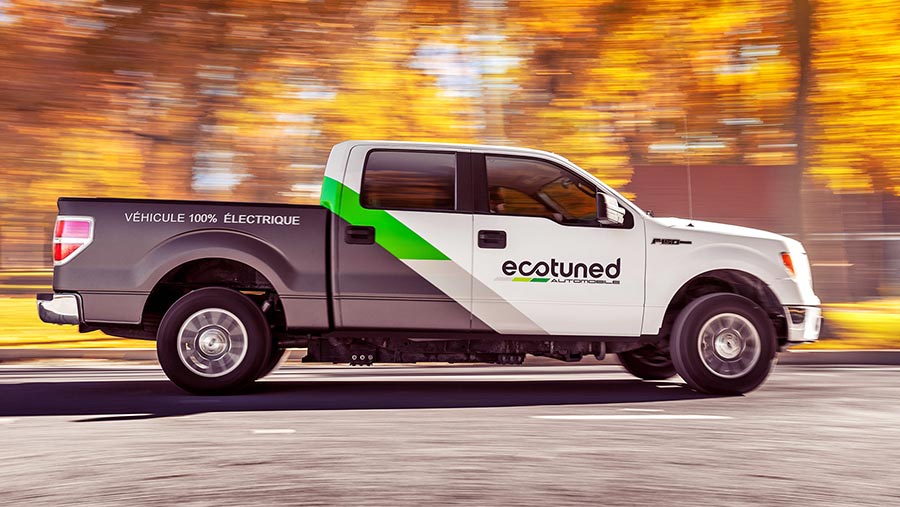 Cleverly, this slots directly into the vehicle – in place of the engine and transmission – without making any significant modifications to the bodywork. 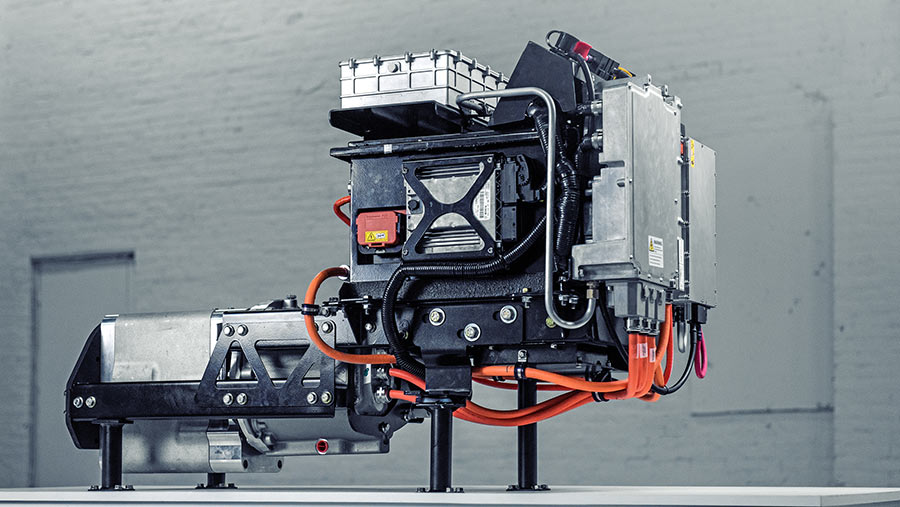 Its 160kW motor develops the equivalent of 214hp and 400Nm torque and it has an impressive towing capacity of 6.5t.

The kit also retains all of the vehicle’s original features, including the heater, which is powered by a small Webasto diesel burner to avoid sapping precious battery power.

Weight distribution is also roughly the same as the donor vehicle.

At the moment, the batteries take six hours to charge, but a version with one-hour charging is on the way soon.

Future models will also be capable of longer range.

It also points out that the motor assembly has a lifespan of about 600,000 miles, meaning it can be swapped from vehicle to vehicle to further improve its cost effectiveness.

At the moment, Ecotuned is concentrating on fleet vehicles, as companies get better incentives for electric conversions than individuals in Canada.

However, it does plan to offer them to the public in the future, as well as adapting the kit to suit other vehicles.

For those wanting to electrify their vehicle in the UK, there are a number of firms specialising in bespoke conversions.

These include Electric Classic Cars, based in Newtown, Wales, which has already produced an electric Range Rover Classic conversion and is currently working on a couple of Defenders. 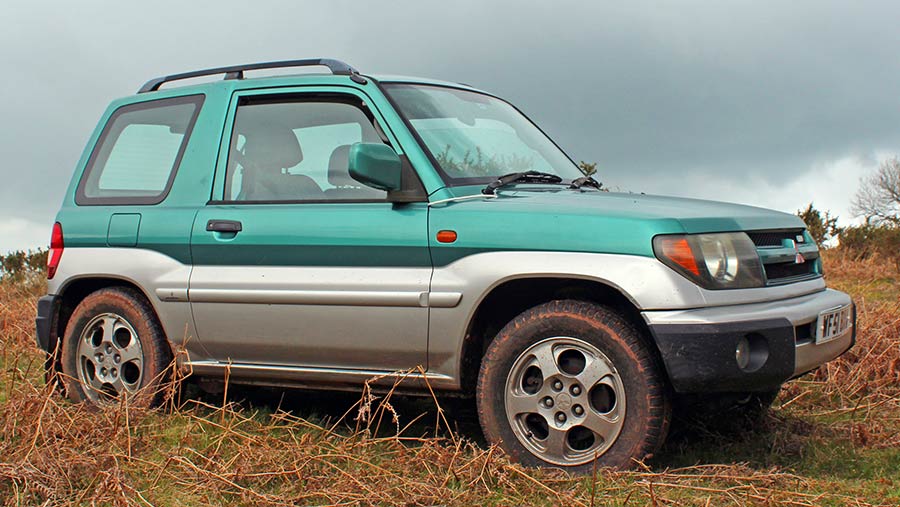 If you’re au fait with electrics, it is possible to do a DIY electric conversion on a more modest budget.

John Lily of Dragon Electric Vehicles has been converting cars to electric drive for the past 30 years or so and has dealt with most forms of electrical drivetrain during that time.

For the inexperienced converter, he recommends starting simple.

That means the donor vehicle should ideally come from an era before complex electrics and Canbus systems, as they simply won’t function without an engine and its ECU in place.

Modern electric drivetrains with 400V systems should also be avoided by the uninitiated, as they’re lethal if handled incorrectly.

Components required for a basic conversion include an AC motor, an adapter plate to fit this to the vehicle’s existing transmission and a set of batteries to power it.

Other ancillary items include an electric vacuum pump for the brake servo, an electro-hydraulic pump for the power steering and some sort of heater.

To avoid draining the main drive batteries, this will ideally be a separate battery-powered unit or efficient diesel burner.

Helpfully, there are a number of companies in the UK that offer all the components required to put an EV conversion together, as well as some advice.

One of these is Everything EV, which is the parts division of Alternative Vehicles Technology.

A relatively lightweight vehicle can be converted for less than £10,000, but prices go up as the weight of the vehicle increases.

Off-the-shelf electric off-roaders are still in their infancy, but a couple of firms already have working prototypes and are taking pre-orders.

One is US firm Rivian, which is planning to launch its R1T pickup and R1S SUV on the home market next year (2020) and elsewhere by 2021. 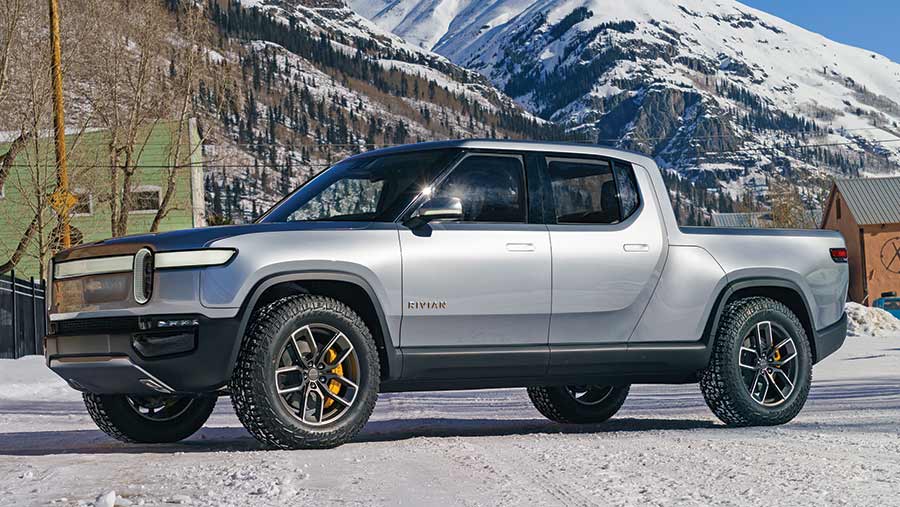 These feature a quad-motor drive system that will propel them from 0-60mph in just 3sec.

They’re also being offered with a number of battery pack options, the biggest of which promises a 400-mile range. 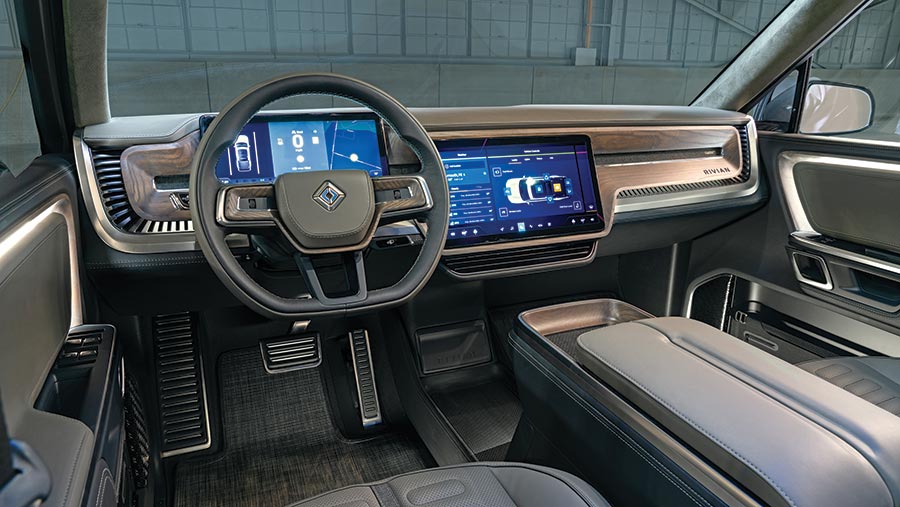 Off-road performance is impressive on paper, with a 1m wading depth, 360mm ground clearance and a traction control system that has the ability to direct power instantly to the wheels with the most grip.

The 5t towing capacity is generous, too.

Both vehicles have been designed in the US, with a bit of help from the UK, and they’re being built in Normal, Illinois.

A far more work-a-day option is coming out of the Detroit workshops of Bollinger Motors.

The angular bodywork of its B1 and B2 prototypes has an old-school Hummer-meets-Land-Rover-Defender vibe, but there are a few clever design tweaks. 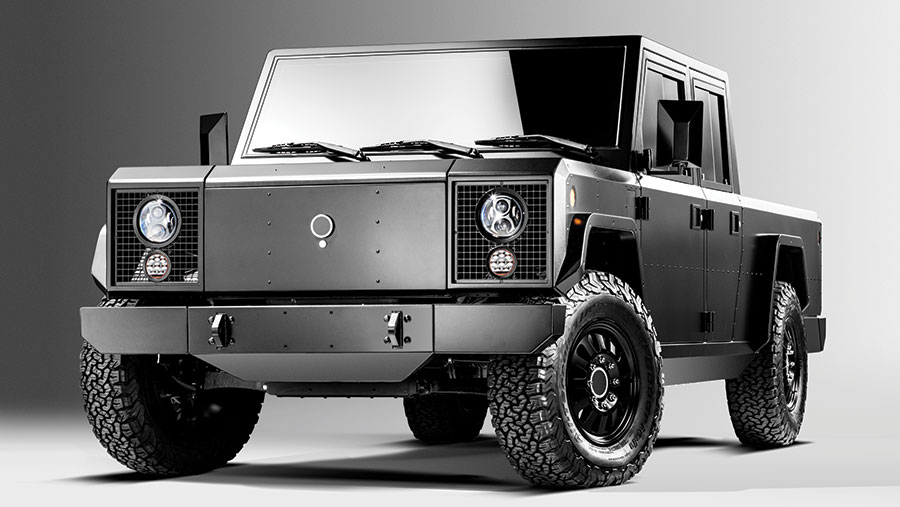 These include a front-to-rear passage that can be opened up to allow long lengths of timber or steel to be carried with ease.

The rear of the cabin can also be swung out of the way for accommodating full sheets of plywood. 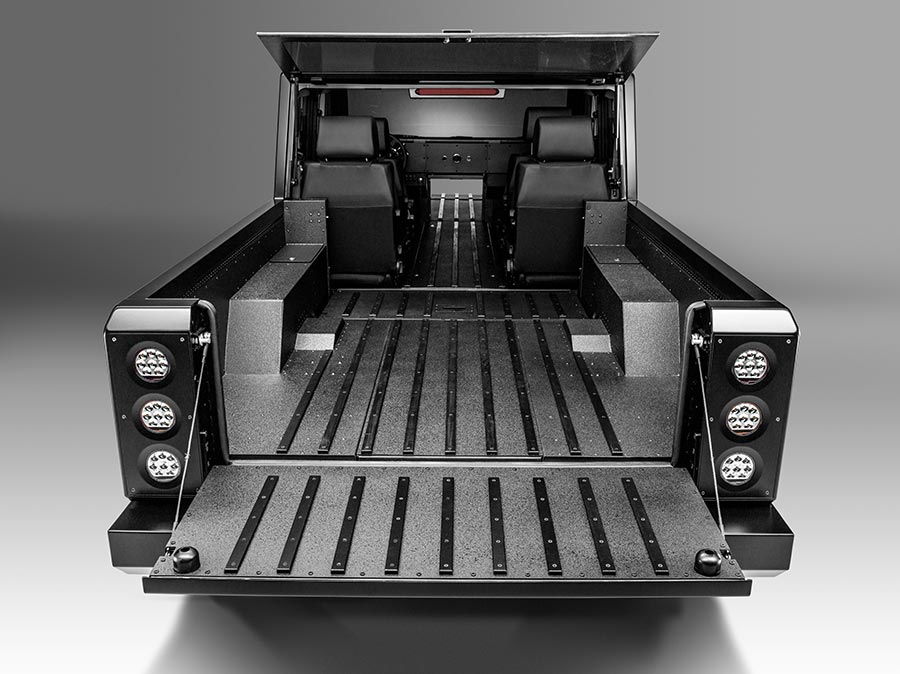 The B2 pickup features a neat front-to-rear passage for carrying long loads, such as lengths of timber or steel

As for the interior, it’s about as basic as a Willys Jeep, without a screen or infotainment system in sight.

Instead, there’s a set of analogue chrome-rimmed gauges and a leather-trimmed Moto-lita-style steering wheel.

But the running gear is a lot more high-tech, with a two-speed gearbox and a pair of AC motors that develop 614bhp and a whopping 900Nm torque.

Power comes from a 120kWh battery pack that is expected to give a 200-mile range.

There is no word on price yet as the firm is only just starting to gear-up for full-scale production.

The mainstream brands are a little further behind, but Ford (which has recently ploughed a considerable amount of money into Rivan) is planning to build an electric Ford F-150 pickup.

Tesla has also said that the first prototype of its load-lugger could break cover before the end of the year.

As for the range of pickups and 4x4s on sale in the UK, news of electrification remains spookily quiet.

But with all this activity taking place, it’s only a matter of time before it comes our way.