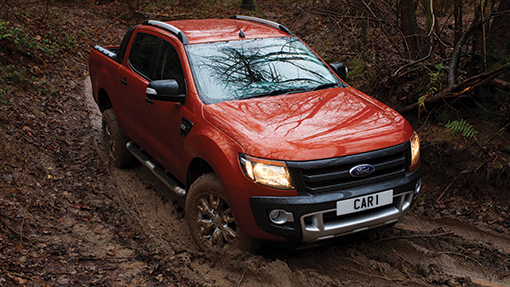 Looking more like a North American pickup than previous models thanks to its big, bluff front-end, the latest Ranger is proving a bit of a hit. Most versions go out with the 2.2-litre diesel engine, which delivers a decent 150hp, but a 3.2-litre four-cylinder with 200hp is available in higher-spec models.

If you don’t need to tackle winter tracks, 2wd versions with single or extended cabs are pretty cheap. The regular cab version, for instance, gets a modest 125hp but keeps the list price under £16,000 despite being equipped to a decent XL equipment level.

Super and Double Cab models get extra kit with the XL designation.

A facelifted version of the Steed is set to come to the UK shortly, with sleeker looks, higher quality interior and nicer seat trim materials. Rear disc brakes instead of drums are also expected.

In the meantime, a 143hp 2-litre engine and six-speed manual gearbox are the mainstays of the model.

The Chinese-designed, Bulgarian-built doublecab aims at functionality rather than high style – for many users that will be fine.

Isuzu made a big push into the market two years ago with its Rodeo-replacing D-Max. The base 2wd is only £30 short of being the lowest-priced vehicle here, yet it still gets the 163hp, 2.5-litre, four-cylinder engine and six-speed transmission.

The Yukon makes an interesting spec-for-price special while the Huntsman pack, for £6,000 on top of the regular D-Max Yukon or Utah price, creates a “gamekeeper special” with lockable drawer and storage compartments, Truckman canopy and rubber floor mat for the load bay, optional dog boxes and divider.

It’s easy to clean but less easy to live with than modern pickup vehicles yet the Land Rover Defender retains an unmatched feeling of durability and go-anywhere ability.

Defender production ends next year and what everyone wants to know, of course, is whether Land Rover, hell-bent on chasing the money in the high-end SUV market, will produce a worthy replacement.

Although Mitsubishi has latched on to the “leisure and pleasure” appeal of a stylish, well-equipped pickup, it has not forgotten its practical roots nor the users who simply want a vehicle that does the job and doesn’t cause too many tears when it gets scratched or bumped.

The 4Work models take the L200 back to basics, with a 2.5-litre, 134hp engine providing the muscle and modest exterior and interior trim keeping things practical. The single cab version gets the prize for lowest list price here.

With the most power and torque of all but the big-engine specials – 190hp and 450Nm – from its 2.5-litre diesel, the Navara has good low-rev performance off-road and easy driving characteristics on tarmac.

A pleasant ride and decent interior also score well, as does the track system that positions load deck lashing points wherever they are needed.

One extended (King) cab model is available among the Double Cabs and the range-topping 3-litre V6 Outlaw should be fun but expensive to run. A new-generation Navara claiming all-round improvements was unveiled outside Europe in June.

Unusually for a practical pickup, the Korando Sports has coil-spring rear suspension, which gives decent ride quality on the road with little, if any, detriment to off-road performance.

But it’s not a big load lugger. The 2.7t towing capacity is fine but, as the shortest vehicle here other than the Defender, load space and payload (600kg) are both limited.

Single, extra and double cab versions of the HiLux are the main choices here, as the only alternative spec to Active is the double cab Icon before upgrading to the thirstier 3-litre V6 Invincible with 171hp on tap and auto option.

A five-speed manual is standard fare throughout when most competitors have six-speeders and if carrying capacity is an important factor, then the HiLux offers less than most.

As a relative newcomer to the pickup scene, the Amarok has made quite an impression with its refined and powerful 2-litre engine delivering 180hp and at least 400Nm of torque in twin-turbo guise.

It’s a wide vehicle thanks to that blunt front-end yet there are several longer pickups. Towing capacity is 3.2t. Road performance is good but it’s not as nimble as some.