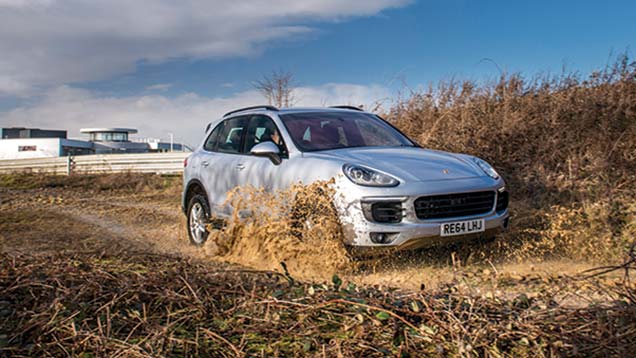 Porsche was ridiculed when it launched its first four-wheel-drive SUV back in 2002, but fast-forward 13 years and everyone’s doing jolly well out of it.

Rather than killing the company, the Cayenne has ironed out the furrowed brows of the doubters by selling almost double as many cars as the rest of the stable put together.

Audi and Volkswagen – with which Porsche’s Cayenne shares plenty of similarities – as well as BMW and Mercedes all now have pucker 4x4s to challenge the Range Rover, which had sat pretty comfortably on the throne until recently.

In a bid to unseat the British brand, Porsche has taken a scalpel to almost every panel of the Cayenne’s aesthetically-challenged tinwork.

The droopy bug eyes and dropped jaw that gave earlier generations a smacked-backside look have been perked-up and it finally seems to have grown into its own skin.

The interior remains a shrine to the technical genius buried underneath. No manufacturer has a central control panel quite like it, and for good reason – Porsche’s spectacle-wearing boffs seem to have fired a shotgun at the dash, with switches and buttons splattered everywhere.

Higher up is a clunky sat nav that doesn’t quite do the price-tag justice, while an analogue clock on the dash is the antidote to all the techy stuff. Fixtures and fittings are of palatial standards, but there’s no seven-seat option offered by some rivals.

Power outputs range from 262hp to well over 500hp, but buyers that spend their sizeable wodge of cash with head rather than heart will likely pick the lowest-powered diesel.

That said, it’s by no means a slouch – the three-litre V6 still has 262hp in its locker and gets up to 60mph in 6.8sec. Porsche reckons it will manage 42mpg as well, though buyers will probably find the stats have drifted away from the realms of reality.

Things get a bit spicier with the S Diesel, which uses a 4.2-litre V8 to get to the same speed in five seconds. It’s a near-perfect balance of performance and power, sipping with almost-acceptable frugality while pumping a high-octane soundtrack through the tailpipes.

Next up is the petrol-propelled 520hp Turbo – a fully certified maniac that packs enough punch to pull the Empire State Building from its footings.

The 4.8-litre, V8 bi-turbo will see 60mph in a blurry 4.1sec and produces enough G-force to start to contort your face into weird shapes.

To state the obvious; it’s a heavier drinker, too. Stats suggest it will get through an ambitious-sounding 25mpg, but if you’ve found £100,000 to buy the car then it won’t be a big deal, anyway. One thing it does need is more noise – the turbos muffle the thrum of the engine too much.

Porsche has also spent its time building a new hybrid model, which is identified by lime-green brake callipers. Sure, it lowers emissions and improves consumption stats across the Cayenne range, but it’s difficult to see what it really brings to the table other than being a legitimate tax dodger.

It’s less powerful, heavier and slower than the other petrols, so why else would you buy one?

Get out on the road and Porsche’s tamed bull elephant dances about with the feet of a tap dancer. Air suspension is an expensive extra that keeps bodyroll sufficiently tight to forget you’re in anything bigger than a 911.

The automatic eight-speeder is also clever enough to know when you’re driving hard and when you’re not, so the engine shouldn’t shout so loud that it offends those in the snobbier villages around London.

But get it in sport mode and the Cayenne provides the sort of throttle response you’d only really need around a racetrack. It puts the bigger-feeling Range Rover Sport well in its place, but that’s partly because the latter carries more in the way of off-road kit.

Porsche ditched the low-ratio box eight years ago, but the Cayenne is still capable of dealing with less welcoming road surfaces using central and rear diffs – not bad considering off-roading was pretty alien to Porsche until 2002.

It drives better than anything else on the market. Unfortunately, if there’s one car you wouldn’t let out at a T-junction it’s this one. It’ll also be expensive to buy, insure, fuel and service. But, if you’ve got the money, who cares?