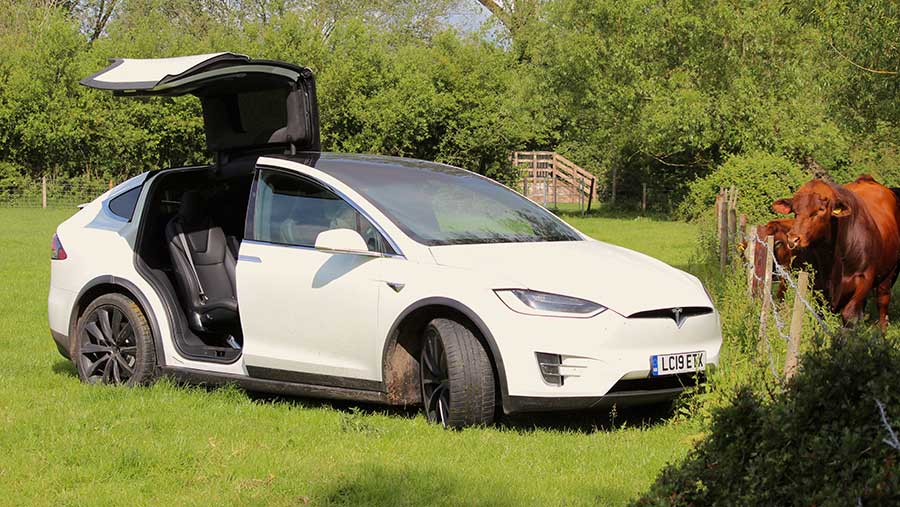 Rocket-building, weed-smoking billionaire Elon Musk is leading an electric revolution intent on transforming transport on earth and beyond.

The engineering entrepreneur only started his Tesla motor business in 2003, but by 2008 had built the first battery-powered Roadster and now has millions of electric vehicles wafting silently around the world.

This speedy progress has caused major alarm among most of the traditional big names in the car-making business, which have been left well behind in their development of electric vehicles.

It has decimated Land Rover sales in China – one of the company’s strongest markets – and several manufacturers have teamed up with rivals in a bid to build competitively priced alternatives to Tesla’s five-model range.

The Model X is Tesla’s SUV and, if Mr Musk’s social media patter is anything to go by, will apparently obliterate Porsche, Range Rover and the rest of its high-value competition.

Though it is physically the biggest car the company builds, it doesn’t have particularly strong off-road credentials (to the point of not having a rated wading depth) but should give a good indication as to how pickup trucks and other 4×4 vehicles might look and work in years to come.

It’s fully electric – there’s not a whiff of oil-based combustion – with a battery-powered electric motor on each axle to provide four-wheel drive.

How do the batteries work?

A large part of the company’s success so far is down to the superior performance of its lithium-ion batteries that use chemistry developed by Panasonic.

The cylindrical cells, numbering in their thousands and each little bigger than a regular AA battery, are stashed under the interior floor.

They can be recharged relatively quickly and have no memory effect, so it’s not necessary to deplete them fully before charging again.

As for life expectancy, buyers get an eight-year, infinite-mile battery and drive unit warranty, after which they are likely to be past their best. The rest of the car is covered by a less impressive four-year, 50,000-mile protection plan.

Do I have to pay to charge it? 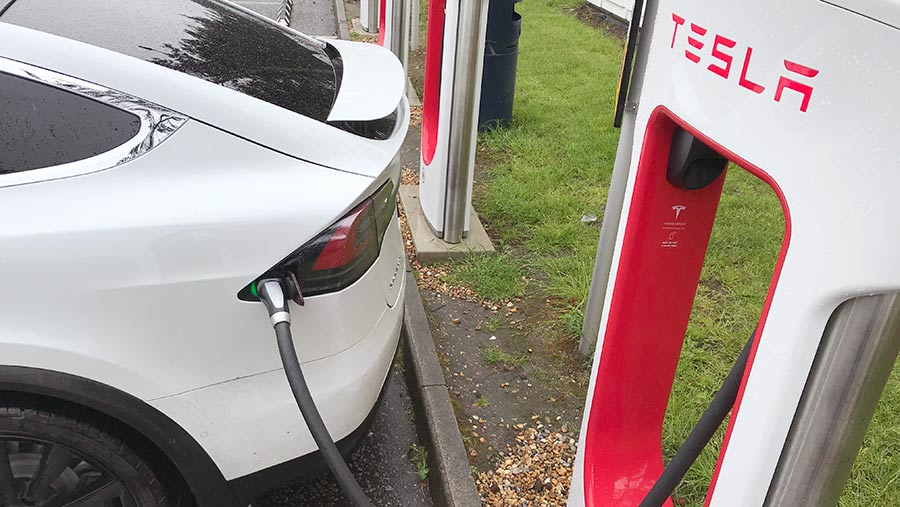 Tesla’s expanding network of Superchargers (its high-capacity charging units based at 50-odd locations in the UK) was originally available free of charge, but the company recently announced that it would be tightening up on that particular luxury.

It now costs 24p/kWh (£20 to fully charge the battery), which remains significantly cheaper than a tank of liquid fuel.

Currently, these facilities are underused, so there are always free booths to pull into. However, if sales increase as expected with the Model 3 – a much cheaper vehicle that has smashed automotive records for pre-orders – then there could be a bit of queuing involved.

A flat-to-full refill using a Supercharger takes about an hour and works by bypassing the car’s on-board charger to provide up to 120kW of direct current directly to the battery.

It will actually fill 80% in under half an hour, with the last 20% trickle-charged to minimise the risk of damage over time.

Residential Wall Connectors can be bought for £460 and involve a visit from an electrician.

Most homes in the UK allow a maximum charge rate of 7.4kW (the equivalent of 19-27 miles/hour), so it will take roughly 10 hours to finish. Using a domestic three-pin socket is much slower – expect to recharge at a maximum rate of 8 miles/hour.

At current energy prices, it’ll cost around £10 (depending on your tariff), though if you’ve got a source of renewable energy then it could potentially be free.

Some fancy hotels and restaurants also offer Destination chargers – typically about 22kW – that are often free to use for customers.

And what if you run your batteries flat? You’ll have to get towed to the nearest charging point, so it’s best to plan a route and necessary stop points to save embarrassment.

The cars are available to see at various showrooms but, to order one, buyers simply go to Tesla’s website and pick from a crudely basic list of spec options – five colours, three wheels and not much else – before placing the order. Deliveries of the Model X tend to be a couple of weeks after ordering.

Prices start at £73,900 and can climb to near £150k, which puts it higher than a lot of its petrol and diesel rivals.

However, that’s quite typical of the electric vehicle market, where even the Vauxhall Corsa-e starts at just over £26k.

As a top-category low-emissions vehicle, buyers get a grant of £3,500 that is discounted from the price at the point of purchase.

The cars are also exempt from London’s congestion charges and benefit-in-kind tax is currently 16% – the lowest available in the UK – and will drop to zero in 2020/21.

All of Tesla’s vehicles have the capacity to update themselves, which means they are kept relatively up-to-date. But naturally with this type of technology, better versions of the battery pack or other hardware will see second-hand values for older models tumble.

Driving a Tesla for the first time is akin to a science fiction experience.

Instant, linear torque by the barrowload makes acceleration deathly silent and spookily slick. Even in standard guise it’s one of the fastest SUVs on the market, with 60mph coming in 4.6sec.

But an extra £8,200 on the purchase price gets Ludicrous Mode that will hit the same speed in a face-altering 2.7secs.

That’s all the more remarkable given its weight. The batteries alone are almost 600kg – far more than the equivalent engine and fuel tank – and the total breaches 2.5t.

Despite the potential carnage that lies under the driver’s right boot, life in the Model X is calmness personified. Tyre noise is well stifled but more noticeable than usual, purely because there’s no combustive murmur.

Having a single range means it’s surprisingly uncomplicated to get moving, too – simply engage the Mercedes-sourced drivestick and the throttle will take it all the way to 155mph.

The cars have all the hardware required to control themselves without input from the driver – should it ever become legal – but for now owners will have to make do with just a few of the functions.

It has eight surround cameras, a forward-facing radar and 12 ultrasonic sensors to monitor objects or cars around it. These appear on a dash graphic, so drivers rarely have to exert any effort to check blind spots.

In Autopilot mode, it can steer, accelerate and brake, and is even capable of changing lanes safely itself. There’s also a function that provides an automated parking service. And, if you return to your car to find it hemmed in on either side, it is possible to beckon it out of the space (driver-free) to make access easier. 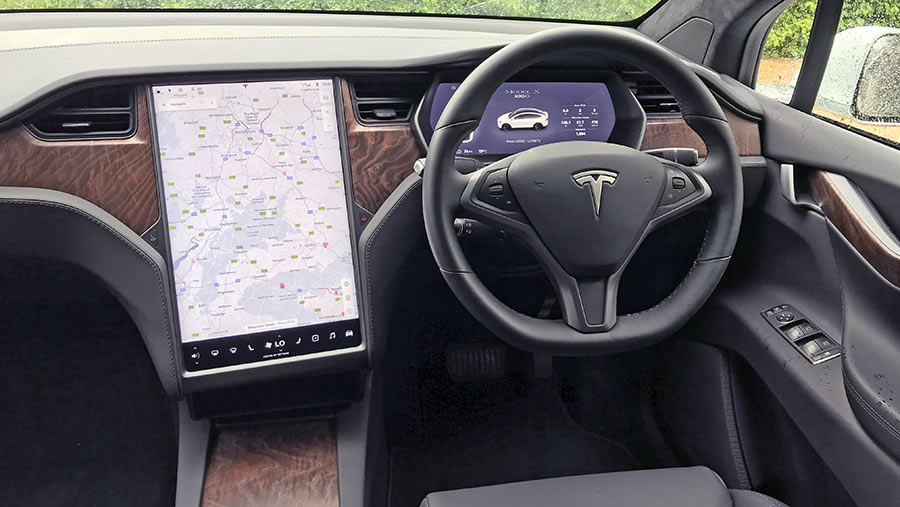 The cabin is clean, sleek and thin on controls. In fact, bar a smattering of steering wheel buttons, everything is packed into the monster 17in touchscreen – a map-book-sized monitor that makes navigation really easy but can be exceptionally distracting on the road.

Seating layouts include space for five, six or seven occupants – a decision that needs to be made prior to ordering.

There are plenty of quirks too, including a bioweapon defence system that uses medical-grade filters to remove pollution from cabin air for the pollen-sensitive.

Other peculiarities include a virtual whoopee cushion that can be placed on the seat of an unsuspecting passenger, and a crackling log fire that appears on the screen while the heated seats work their magic and Marvin Gaye drifts through the speaker system.

However, the rear Falcon doors are frankly cringeworthy. They open vertically and offer decent access to the second row, but are slow to operate and attract stares from all corners of the supermarket car park.

The Model X – and Tesla cars in general – are true trailblazers that have left many of their rivals, both electric and oil-powered, well behind.

Driving range is adequate for most jaunts and, by fitting a home-charging system, topping up the batteries isn’t overly arduous.

Naturally, there are concerns over the company’s repeated failure to turn a profit, particularly given customers’ reliance on Tesla’s infrastructure. And, although access to Superchargers is currently easy, they may get inconveniently busy in years to come.

In our opinion, the low running costs don’t do enough to offset the high list price, but it’s a technological masterpiece, a bastion of emissions-free driving and an indulgence worth exploring if you’ve got the cash.