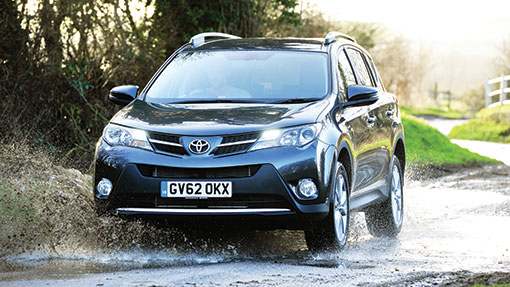 Toyota masterminded a new genre of cars when it ushered the Rav 4 into the 4×4 market in 1994. With three doors, a side-hinged boot and a spare wheel mounted on the back, the trendsetter created a new niche as a halfway house between nippy hatchback and off-roading hard-nut.

Fast forward 20 years and you’ll have no trouble distinguishing old from new. All the heart-warmingly off-roady features of the 1990s icon have been sliced off, leaving the fourth generation somewhat lacking in individuality.

Toyota puts the change down to demands for a more spacious family wagon. The company has delivered on that count, too – it’s 205mm longer, 30mm wider and 25mm lower than the one that came before.

The results are positive if you’re looking to produce a lot of kids, but the exterior looks have suffered and there’s little to tell it apart from rivals.

Three engines are on offer, although the first – a 2-litre, 149hp petrol mated to a CVT transmission – is thirstier than an African elephant after five bags of McCoys.

Two-wheel-drive versions come with a 122hp, two-litre diesel while four-wheel-drive models have a bigger 2.2-litre diesel engine pumping out 148hp. Transmission is a six-speeder in either automatic or manual guise and you’ll get 37mpg at best.

It does feel like a big lump on the road, too, yet manages to keep bodyroll kept in check most of the time. The diesel is torquey, powerful and pretty unstallable but it’s also vocal in its endeavours and sends rumbling vibrations up through the steering wheel.

For farm use the modest ground clearance is also a downside, although the diff-lock can provide an equal split of power to the front and back wheels. Towing capacity is a modest 2,000kg.

Plenty of good features and lots of interior space, but short on personality.