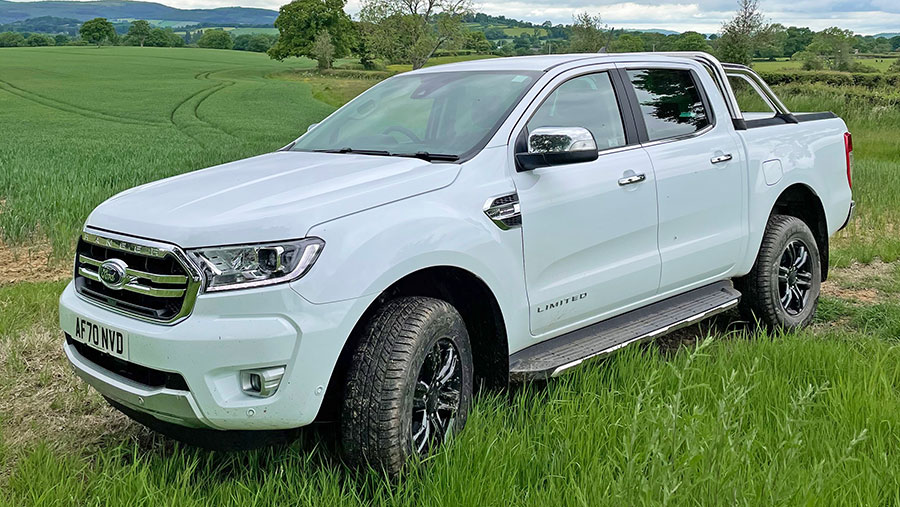 After it stopped pedalling rebadged Mazdas and designed a vehicle of its own, Ford soon became the biggest seller of pickups in the UK.

The Ranger consistently tops the sales charts, shifting more than 13,000 vehicles in 2020 – double that of its nearest rival, the Toyota Hilux.

And Ford’s partnership with VW will bring in fresh blood from 2022, with the launch of a new Amarok that will be based on Ranger underpinnings. This deal has seen expansion of Ford’s South African factory so that it will be able to produce a total of 200,000 pickups/year.

See also: Video: All you need to know about passing your B+E trailer test

Top seller it might be, but the Ranger has often struggled to match the refinement of more premium trucks, such as VW’s Amarok, the Mercedes X-Claas, or even the Nissan Navara.

However, with all these competitors already gone, Ford has become the default option for those seeking a more polished pickup.

The current Ranger was introduced in 2019 and, although it’s based on a platform the firm has used since 2011, it is considerably smarter than its predecessors.

Buyers get the choice of single-cab, super-cab or double-cab variants and several different spec levels – XL is the most basic, followed by XLT, Limited and Wildtrak.

There’s also a new Thunder edition (essentially a Wildtrak with different styling) and the non-commercial Raptor, with sportier trim and independent suspension on each corner.

Our test truck came in the popular Limited guise, complete with an automatic transmission and leather seats, plus a few optional extras. 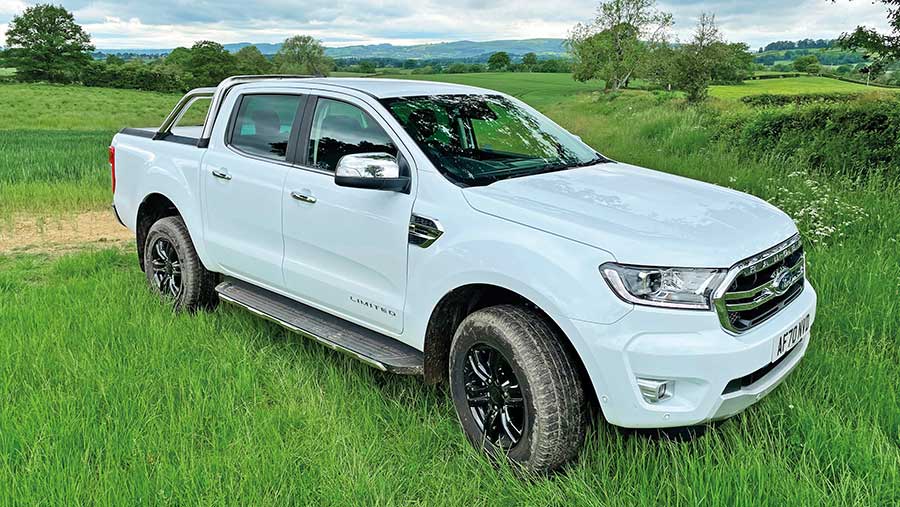 The death of the pokey 3.2-litre, five-cylinder engine from Ford’s pickup range will have left many buyers bemoaning the loss of potential pulling power.

But despite its lower displacement, the 2-litre, bi-turbo Ecoblue unit that replaces it offers more horsepower and torque – 213hp and 500Nm, versus 200hp and 470Nm.

Smaller twin-turbo engines often don’t have the real-world power of the larger-displacement blocks they replace, but in this case the engine does actually seem like an upgrade.

It pulls hard, is quieter than the old 3.2 and is also far less of a thug. This means there’s no more “look-at-me” spinning of the wheels as the power’s put down, unless you really go for it.

Unsurprisingly, it gives better fuel economy, too, averaging about 32mpg during our test drives – many drivers struggled to reach 30mpg with the bigger block.

Ford is using the Ecoblue engine throughout the Ranger line-up and it’s the tuning and number of turbos that dictate the power output.

In entry-level models there’s a single variable-geometry unit delivering 130hp or 170hp and the more powerful bi-turbo setup comes in as you climb up the spec levels.

Although the motor is impressive for a 2-litre, it is the new 10-speed automatic that’s to thank for much of the performance improvement. It’s the same gearbox used in the Mustang muscle car and, as there are so many gears to choose from, it always keeps the engine at its peak power output.

Shifts are pleasingly smooth and it’s quick off the mark, helping to deliver a 0-62 time of 9sec.

The name Limited might imply that our test truck was lacking features, but it’s actually a fairly highly specced model. In fact, the more expensive Wildtrak and Thunder variants only really have flashy trim upgrades to set them apart.

This means luxuries such as leather seats, an infotainment system, reversing camera, heated windscreen and tyre pressure sensors are all standard fitments.

Our test vehicle also came with the so-called Limited Premium pack, that brought in a locking rear differential, parking assist and adaptive cruise control, for a cost of £1,680. 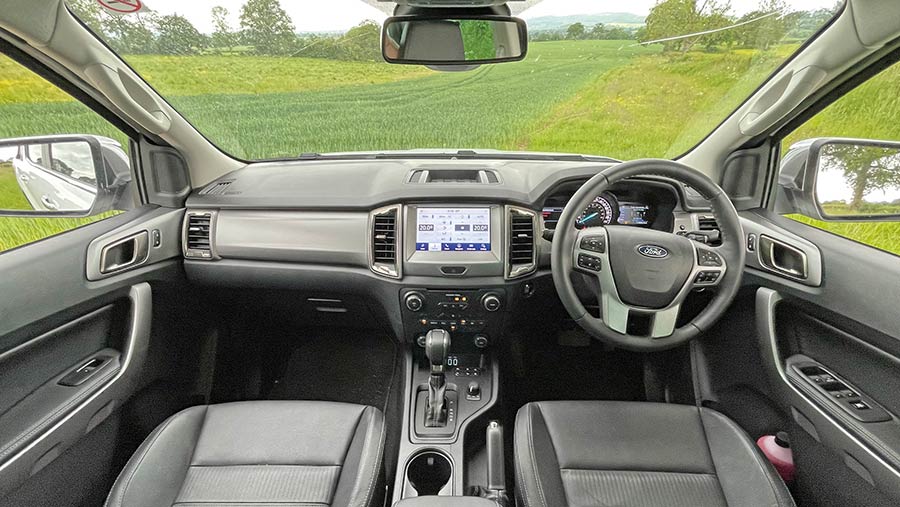 For anyone that does regular motorway driving, adaptive cruise is worth that figure alone and the diff-lock could make the difference between emerging from a bog victorious or sheepishly phoning for a tow.

The muted black-and-grey colour scheme is about as vibrant as a mine shaft, but it’s smart, functional and less try-hard than the Wildtrak and Thunder.

Some of the controls are hard to pinpoint while driving, particularly switches for the fans, air conditioning and heater, making it all too easy to find yourself ramping up the heat when you’re already sweating.

Settings can be adjusted in the screen, but they take some tracking down – particularly when using Android Auto or Apple Car Play, as you have to leave the system to make adjustments. 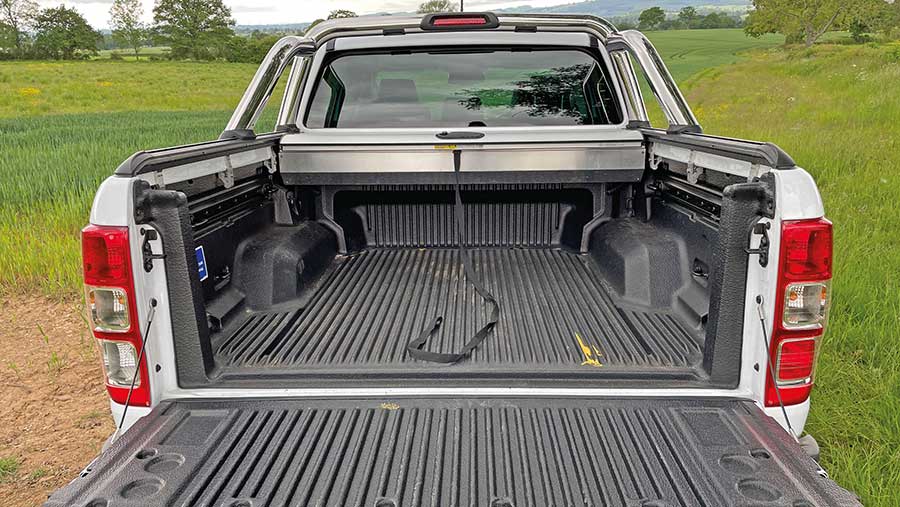 There’s no change to the Ranger’s four-wheel drive setup, with a part-time system that’s switched using a dial on the centre console.

But it is designed for off-road use only and there’s no rear axle diff-lock as standard. However, as we mentioned earlier, our test vehicle had one as part of an options pack.

This gives it the same off-roading credentials as the remaining pickups on the market, as it was only the Mitsubishi L200 and VW Amarok that offered more sophisticated setups.

On top of the mechanical systems, Ford has ABS-based traction control that brakes spinning wheels to help better distribute grip.

This is an advantage in certain situations, but if it gets bogged down it’s often best to turn it off.

As plusher rivals have bowed out of the sector, Ford’s Ranger has become the prime option for those hankering after a luxury load lugger.

Features that set it apart from the competition include a smooth, 10-speed automatic transmission, supple suspension and a surprisingly gutsy 2-litre bi-turbo engine.

Its considerable bulk and a poor turning circle are its only significant downfalls.

Other techy features include a hill descent function, pre-collision warning system and trailer sway control that detects snaking and corrects it by reducing engine torque and applying the brakes.

The Ranger’s 2.2t unladen weight, bulky body and large front-and-rear overhangs mean it’s never going to be a stellar off-roader, but it has got enough ability for most agricultural buyers.

A low point is the truck’s poor turning circle, which can be tedious when shunting around a small yard or trying to get into tight spaces. Combined with its nose-to-tail measurement of 5.4m, this makes it feel like bit of a bus.

An area where Ford has pulled out the stops is the suspension. It’s still got leaf springs at the rear, but the ride is pleasingly smooth for a truck that is set up to haul a bulk bag of sand in the back.

Towing capacity is the obligatory 3.5t and it can carry just over 1.1t, putting it slightly ahead of the competition.

Even though it was the largest truck in our test group, it had the shortest usable load bed. Ford has extended it with an indent that goes into the void behind the rear seats, but that won’t be much use for most people.