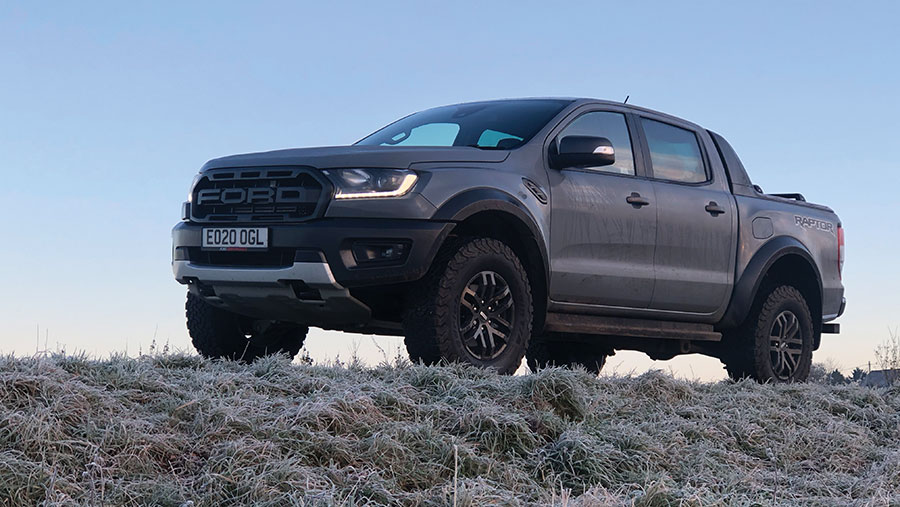 The Ranger Raptor resides in Ford’s Performance stable, alongside the ST, GT and RS cars, and is the show pony in its big-selling pickup range.

Its brash appearance, based on the popular F-150 Raptor available in the US, is dominated by flared arches, chunky wheels, beefy suspension and a Ford-stamped grille.

But exterior fripperies are balanced with European restraint in the drivetrain department. That means we must make do with a 213hp 2-litre EcoBlue engine – not entirely “performance” material compared with the Americans’ V6 3.5-litre, 450hp GT-sourced block, though significantly more frugal.

The biggest catch is the loss of its commercial vehicle status, which will be a deal-breaker for most farm businesses. Modifications to the running gear have butchered payload and towing limits, which means two things: VAT-registered buyers won’t be able to claim tax back as a company expense, and it won’t be much use for farm work, either.

The Raptor comes with the same 10-speed auto gearbox that is now fitted in the standard Ranger, which offers smooth and barely perceptible shifts. It can also block change through the gears, rather than having to shift through them in sequence, which is handy for swift overtaking manoeuvres.

The obvious fly in the ointment for many prospective Raptor owners will be the modestly sized twin-turbo 2-litre diesel engine that masters 62mph in 10 seconds. That’s half as quick as the V6 US version and a little mediocre, given its price.

Ford may go big on the “size doesn’t matter” sales patter, but the engine’s pair of turbochargers can’t make up for fewer cylinders and smaller cubic capacity when accelerating in anger (nor is the company fooling anyone with the fake engine burble sent through the Ranger’s speakers).

The upshot is respectable fuel consumption stats for a pickup – 31mpg on the combined cycle.

It sits on a heavily strengthened version of the Ranger’s ladder chassis, and there has been some fairly extreme work to the suspension.

The workaday leaf springs have been ditched in favour of coils and a Watt’s linkage, while Fox dampers all round offer 32% greater travel at the front and 18% at the rear.

This all delivers what is probably the best pickup ride on the market and a match for some SUVs. 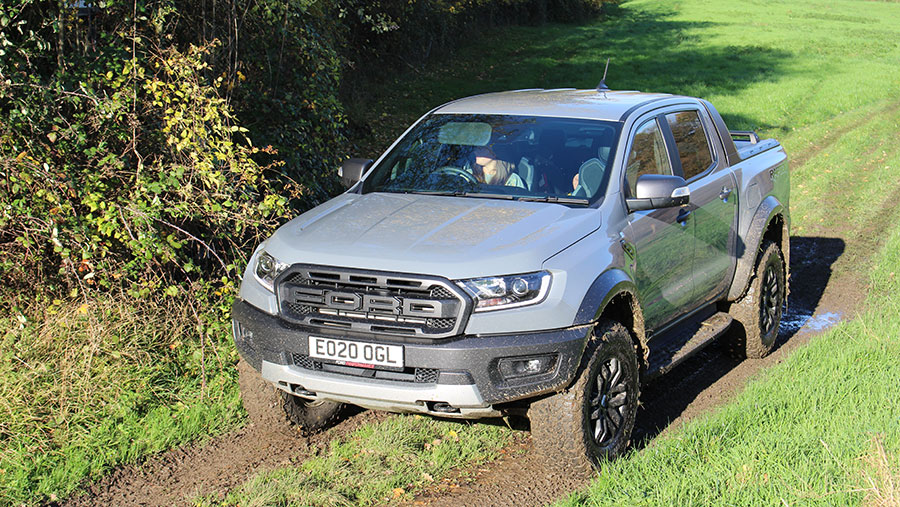 Notable stats for serious off-roading include a wading depth of 850mm (a 50mm improvement), a ground clearance rise of 30mm to 283mm and the addition of a 2.3mm bash plate under the front bumper.

The vehicle also comes with a Land Rover-style terrain response system that serves as a quick way of adjusting acceleration, traction control, steering sensitivity and gear changes by selecting one of six modes – grass, gravel, mud, and so on. However, for those who prefer to be in control, there is still the option to hop between 2H, 4H and 4L via a dial on the centre console.

As for proportions, it’s longer, wider and taller than the meanest-looking standard Ranger – the Wildtrak. Sadly, the hulking appearance is a bit of a falsehood when it comes to work. As mentioned, the suspension improvements that make it such a slick operator on the road have caused serious payload problems. It is rated to carry just 620kg in the rear bed and towing capacity is down to 2.5t – a drop of 1t.

The interior is more car than pickup, which goes some way to justifying the £50,000 price tag. There are comfy Alcantara seats throughout, blue stitching holds the leather together and minimal hard-touch plastics in sight. In all, it’s more subtly finished than the Wildtrak. 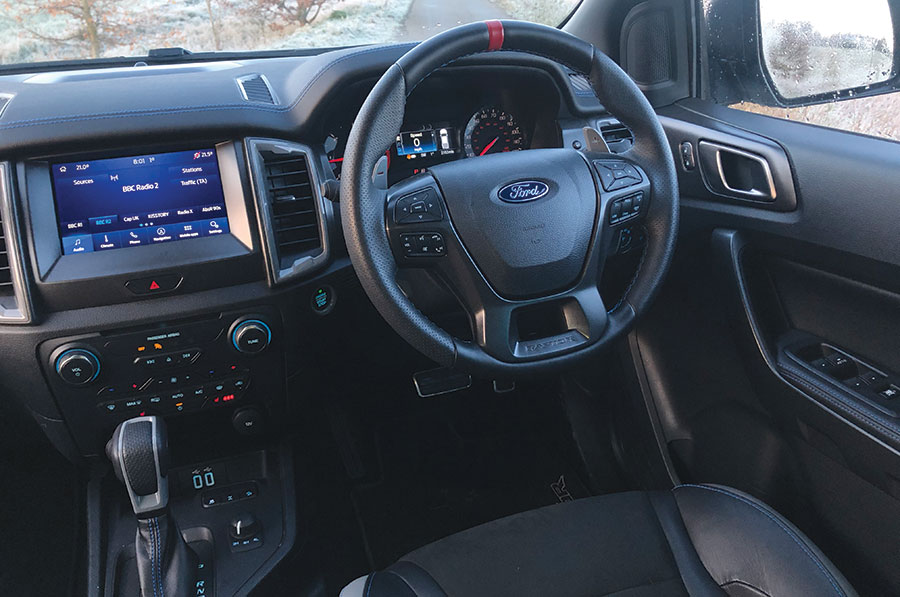 The high spec includes heated seats and windscreen, a reversing camera and automatic main beam. However, as with a lot of Ford vehicles, the air-con and heating buttons lack colour definition, which means nothing stands out.

Navigation and phone connection through Ford’s 8in Sync 3 infotainment system is easy enough. There are also numerous steering wheel buttons that include cruise, radio and two menu flickers, though they can take a little time to fathom.

With all its workmanlike qualities gone – big towing capacity and payload, plus the lucrative commercial vehicle status – it’s hard to make a favourable argument for the Raptor. The Ranger Wildtrak offers far superior working credentials for £15,000 less (in the case of VAT-registered businesses, at least).

The positives are it looks pretty good, handles tidily on the road and is comfortable to drive. Good for leisure, not for labour.