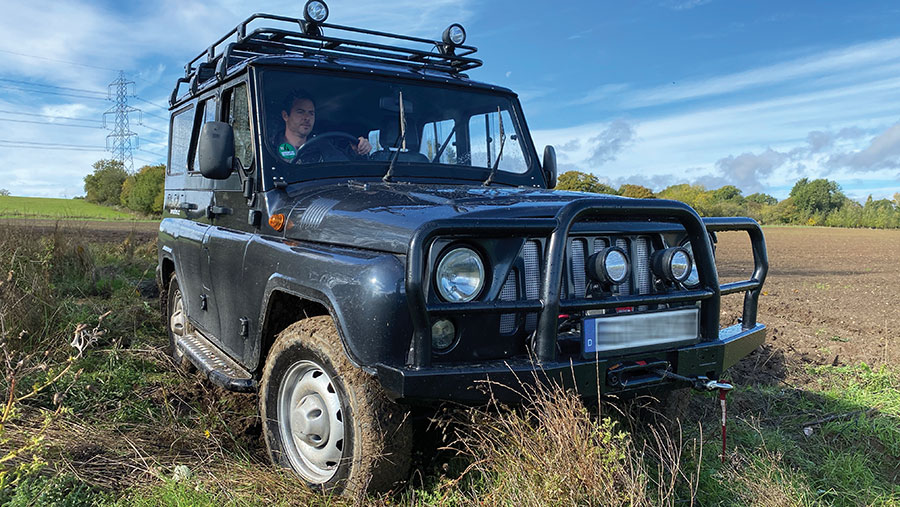 Mainstream vehicle manufacturers have all but abandoned the dedicated off-road sector in favour of luxury, mass-market soft-roaders that reel in the big bucks.

That might seem like a smack in the chops for those seeking an honest working tool, but the void is starting to be filled by smaller specialist firms that can justify building and importing machines in lower volumes.

Want an original Land Rover Defender that’s nicer to drive? Ineos should be able to help you out. Or a custom-built off-roader with a body style of your choice? Ibex is the firm to call. But maybe a rough-and-ready Soviet-spec military truck is more your bag?

Step up the Spartan: a no-frills, five-seat 4×4 that starts out life as a Russian-built UAZ Hunter, before receiving a factory right-hand-drive conversion and a raft of upgrades to ensure it meets the UK’s stringent road regulations.

All of this is the work of Czech/UK firm MW Motors, which imports the machines to the UK.

If you’re sure you want to take things back to basics, this vehicle will certainly put your convictions to the test.

The design harks back to cold-war era Russia, where UAZ 469s (the Hunter’s predecessor) were used and abused by Soviet armed forces on some of the most inhospitable terrain in the world.

As a result, the vehicle has become a bit of an emblem of Slavic toughness and durability, which is no doubt why MWM decided to name its version after an ancient warrior state.

However, the word spartan is arguably more appropriate for describing the specification of this vehicle. There really is nothing superfluous in sight – no central locking, no radio, no carpets or padding, no winding windows and definitely no air conditioning.

The interior is home to five vinyl-clad seats, rubber floor matting throughout and a set of rudimentary controls.

There are some fans for ventilation, which draw air in through a flap on the bonnet, and a crude but furnace-like heating system that’ll stave off the worst a Siberian winter can throw at you. 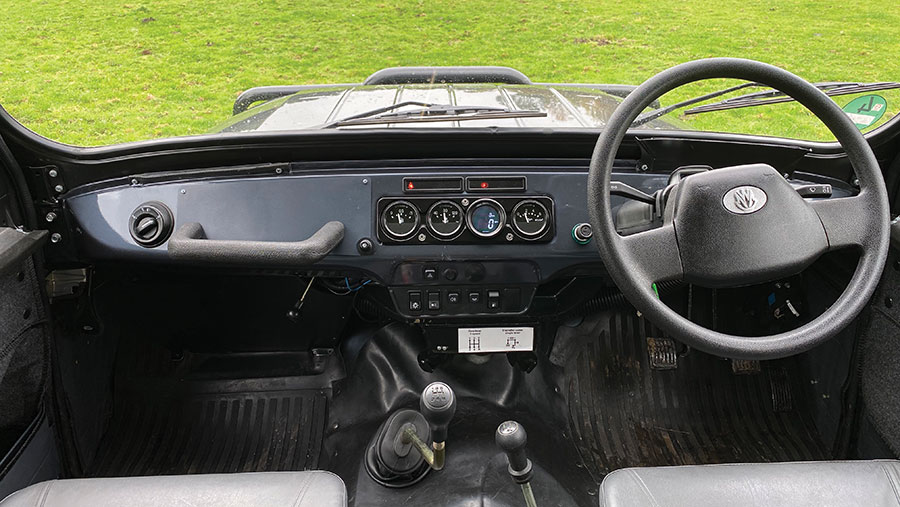 This is controlled via a valve that pipes hot water straight out of the engine block and into the heat exchanger in the cabin. It’s worth mentioning that the tap is tucked well away under the dash, so the driver needs to decide how hot they fancy making things before they get on their way – all part of the charm.

There’s a small load space at the rear and the second row of seats can be folded away (not very easily, we might add) leaving a 1m-deep area for transporting stuff.

Safety equipment extends to some inertia seatbelts and a brake pedal, which controls a set of two-piston disc callipers on the front and drums at the rear.

There’s no getting away from the fact that this is an incredibly crude vehicle – something we’re not really used to these days.

But, unlike a Defender, there’s ample legroom, a reasonable amount of space for your right arm and a basic, yet surprisingly comfortable armrest.

The seating position is peculiar, though, with a wildly offset clutch and slightly odd gearstick crank – both of which are quirks of converting the vehicle from left- to right-hand drive.

The Spartan we got to test was a pre-production model, so oddities like this may well be ironed out on customer versions. 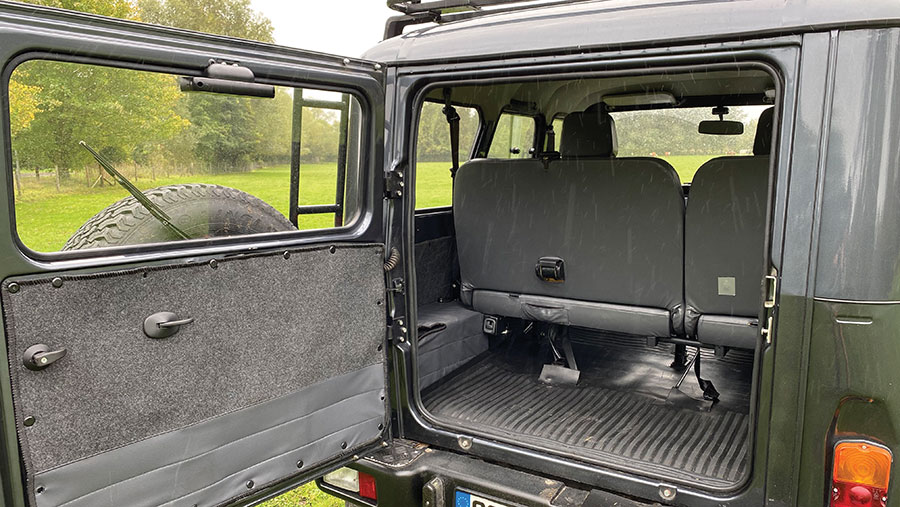 Is it good off road?

Thanks to some soft, doughy suspension, the ride on rough terrain is surprisingly comfortable and it’s a fun thing to hoon around in. We barrelled along some fairly grim farm tracks and it did a better job of ironing out the bumps than many pickups.

Minimal overhangs and no low-dangling trim also meant we could cross deep ruts without risking damaging the underside, plus the all-terrain tyres offered surprisingly good grip.

Like most pickups, the Spartan’s 4×4 system is a part-time affair, with drive sent to the rear wheels at all times and directed to the front via a two-range transfer box. Annoyingly, you have to be at a standstill to engage four-wheel drive and it can take a bit of shunting back and forth to tease it into the desired range.

The five-speed manual transmission is a comparatively smooth, positive shifter though, and we never had any trouble getting this into the right cog. 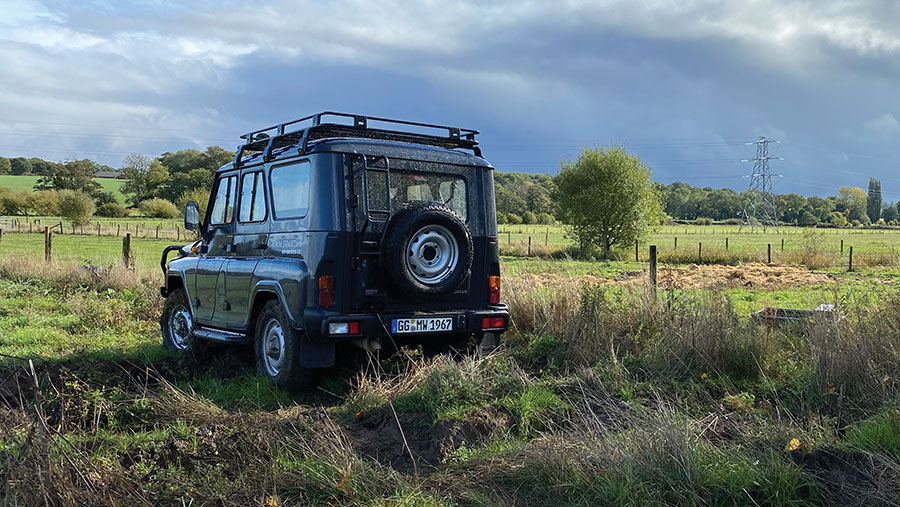 Unsurprisingly, things start to unravel when taking the Spartan to the tarmac, where the ponderous handling and considerable steering play make it more of a voyage than a road trip.

MWM says production models will have a different castor angle, which might reduce the amount of steering wheel rowing required to keep it in a straight line.

In reality, this will never be a vehicle for taking on lengthy journeys and, despite it having a top speed of 80mph, we’d suggest it’s best used off-highway and for local trips on A- and B-roads. Towing capacity is relatively low at 1.5t and it can carry a 675kg payload.

There’s no point beating around the bush – the build quality is decidedly ropey. Panels fit where they touch, some of the doors meet the seals better than others, and there’s the odd sharp bracket to hook your jumper on.

But it’s definitely solid. At 4m long and 1.8m wide, it’s a relatively compact vehicle, and despite there being no heavy interior fitments or ancillaries, it still has a curb weight of more than 1.7t and a gross weight of about 2.5t.

The chassis isn’t galvanised, but it is treated with a zinc primer, before a top-coat of gloss black is applied – that should give it some protection against the elements.

The real market is for those who want a rough, tough truck that they can bash around in and repair themselves with a simple set of tools.

The only piece of relatively modern electronics is the engine ECU, which MWM has tweaked to meet UK emissions standards.

People who like to give their vehicle the personal touch also have plenty of scope for modification, with aftermarket axle diff-locks, lift kits and bigger wheels and tyres all available.

UAZ does offer higher-spec versions, but MWM says it is concentrating on basic models to keep the cost down. There are a few add-ons to choose from though, such as a bull-bar, winch, roof rack, rock sliders and a tyre pressure monitor.

Unfortunately, the fact that the Spartan has five seats and no separate load area means it’s classed as a passenger car rather than a commercial vehicle. This missed opportunity to reclaim the VAT makes the £16,583 + VAT (£19,900) price tag look a little steep.

According to MWM, a commercial pickup version could be on the way, which would make it a more attractive prospect for VAT-registered businesses.

The firm is planning to sell the vehicles directly and through a network of dealers that will provide backup and supply spare parts. Potential buyers are being offered test drives, which would definitely be a sensible move before taking the plunge.

MW Motors specialises in electric vehicles and in 2021 it will be launching a battery-powered version of the Spartan.