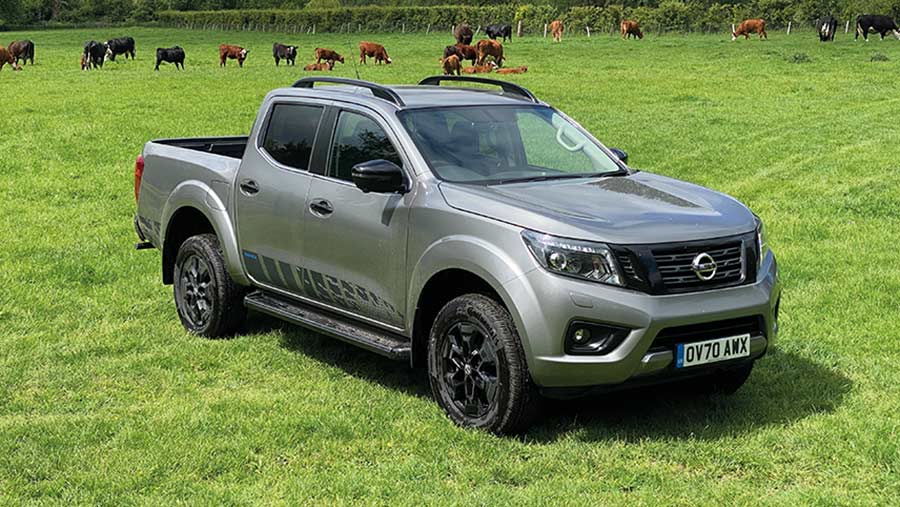 There have been several icons of the pickup market and Nissan’s Navara, particularly in its late-noughties heyday, is certainly up there with the great 1990s’ Toyota Hilux.

The company was the first to latch on to a demand for high-spec pickups that, as company vehicles, offered attractive tax breaks compared with SUVs, without requiring their owners to sacrifice creature comforts.

But, after a rocky few years, it has now decided to call time on the Navara’s 16-year UK residency and the last one will be waved out of a dealer showroom at the start of 2022.

The company cites dwindling demand as the main factor for its retreat to the safety of high-volume and more profitable markets in Australasia and south-east Asia, where a new, mildly titivated model was recently launched.

In the UK, sales have slumped from well over 10,000 in 2017 to just over 4,000 last year, with its 13% market share putting it fourth in the pickup pecking order behind the big-selling Ford Ranger, the Hilux from Japanese compatriot Toyota, and the soon-to-be-gone Mitsubishi L200.

Nissan hasn’t been helped by the relatively fruitless deals it penned with Mercedes-Benz and Renault – both of which made fleeting and unsuccessful sorties into the pickup market with models based on the Navara.

And it has also been mopping up the untold damage caused by chassis rust issues on D40 models, which had an unfortunate tendency to snap in half – something that will have inevitably handicapped sales of new vehicles.

Given that the UK accounts for roughly 40% of the firm’s truck registrations in Europe, these factors have left its Spanish factory bumbling along at well below capacity.

It will close in December, after which sales will continue until stocks run dry, with facilities in South Africa and Thailand serving the rest of the world from then on.

The Navara’s stocky front is accompanied, in N Guard spec (one of nine model variants), by 18in black alloys, side decals, a black front grille, side steps and roof rails – a chavvy-sounding combination that has been executed surprisingly tastefully.

That bullish appearance is backed up by performance, with its fairly gutsy 2.3-litre engine tuned to deliver 190hp – though that doesn’t fully materialise until 3,750rpm.

Maximum torque of 450Nm is a little shy of the 2.8-litre Toyota Hilux, but almost 50% more than that of the Isuzu D-Max.

It’s available from 1,250rpm to 2,500rpm and, as a result, the truck pulls well at low revs, is happy to mooch about at little more than tickover and rarely goes hunting for an easier gear.

It’s reasonably quick out of the blocks too, and keeps firing to 4,500rpm with a full dose of right boot.

With that in mind, it’s surprising to note that the 0-62mph time is half-a-second slower than the Toyota, which tends to be more lethargic from a standing start but generates pace aggressively through the mid-range.

However, the Navara has an extra gear, making for a total of seven in the automatic.

That makes the shifts marginally slicker, and the combination of engine and gearbox provides, by pickup standards, an enviable spec book combined consumption figure of 38.2mpg.

Our real-world figure was close to 33mpg, but that still beats the Hilux and D-Max by some margin – both wallow around the 30mpg mark. 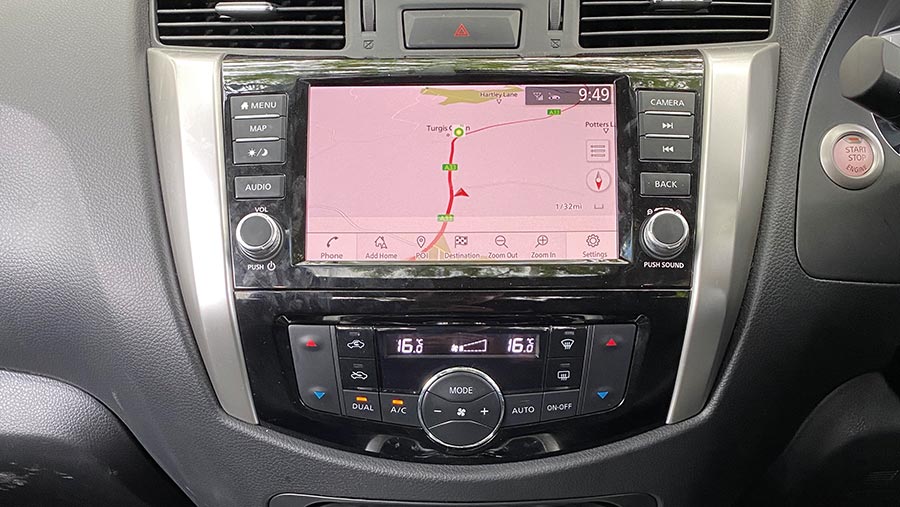 But the existing format is decent enough, despite being launched six years ago.

Nissan tends to do better with high-spec models, so cameras, cruise control and air-con are long-standing staples in the Navara stable.

However, pillars as thick as a weightlifter’s thighs hamper views to the corners and it’s not as easy to see to the front of the vehicle as in the skinnier-set Isuzu D-Max.

But that needn’t mean parking problems, as the N-Guard spec includes a bird’s-eye-view camera system, with four camera feeds that are displayed on the 8in touchscreen monitor.

Switchgear is generally solid, unfussy and reasonably smart, and there’s not too much of it, with air-con and other essentials easy to find at a glance. 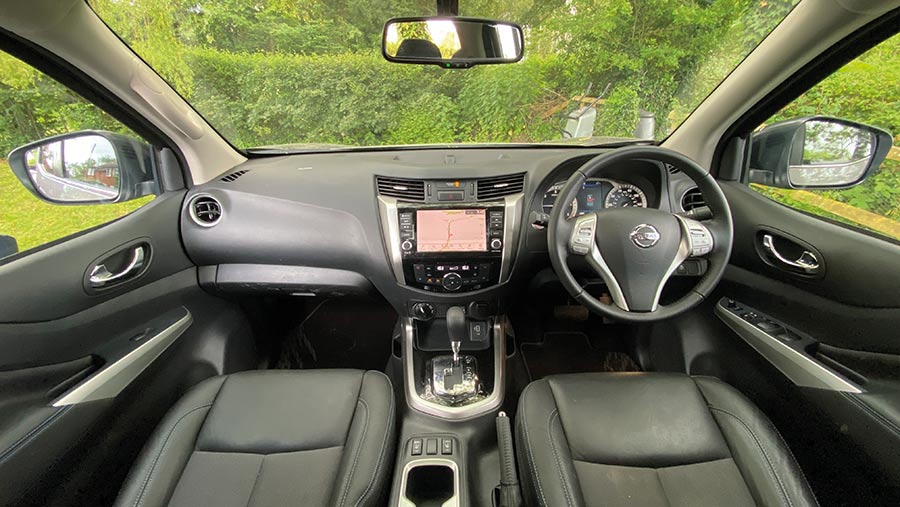 The partial leather and cloth-clad seats are comfortable and provide moderate side support, and there is also cushioning where passengers’ limbs touch, such as the central cubby lid and door ledges.

The leather-wrapped steering wheel is less agreeable – it’s too small, too heavily weighted and wouldn’t look out of place on a Micra.

Sadly, it doesn’t lighten up at slow speeds either, so requires a bit of muscle to perform tight manoeuvres. As a result, the Navara feels clumsier than it actually is.

Legroom is limited in the rear, but seat comfort is about as good as it gets in a pickup.

The rear seat base folds up as one length, but doesn’t reveal a completely flat deck underneath, making it unsatisfactory for toolbox storage. 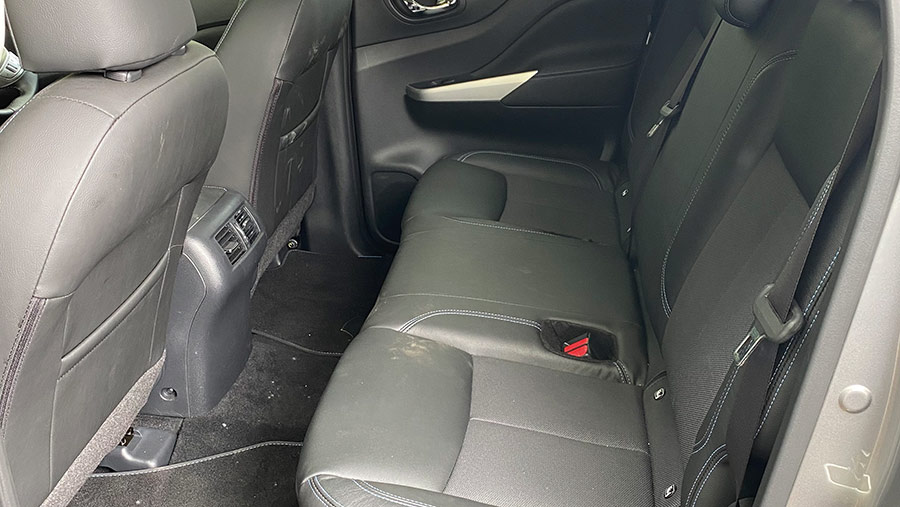 Perks of the N-Guard spec include a sunroof, privacy glass and a tailgate spoiler which, if nothing else, provides a useful surface for plonking a mug of tea.

The Navara has an electronic limited-slip differential as standard, which means it progressively locks depending on how much wheel slip is occurring.

It’s perfectly effective for light-duty off-roading, but can’t freeze the differential solid like a manual lock. However, there’s the option of speccing that feature for an extra £450.

Two- and four-wheel drive, plus the creeper range, are selected via a twist of a dial on the centre console that sends power to all four corners.

If serious exploration is your thing, then there’s also the option of the AT32 variant, which is available with a locking front differential.

However, it’s here that things get expensive, with the price starting at £39,747 (ex VAT) in N-Guard spec and the front diff lock adding a budget-busting £3,250.

Nissan’s choice of suspension is somewhat unorthodox among pickup makers, with a five-link arrangement and dual-stage coils favoured over more traditional leaf springs.

It delivers a reasonable ride but, frankly, there’s not much to split it from the leaf-sprung competitors on potted farm tracks. 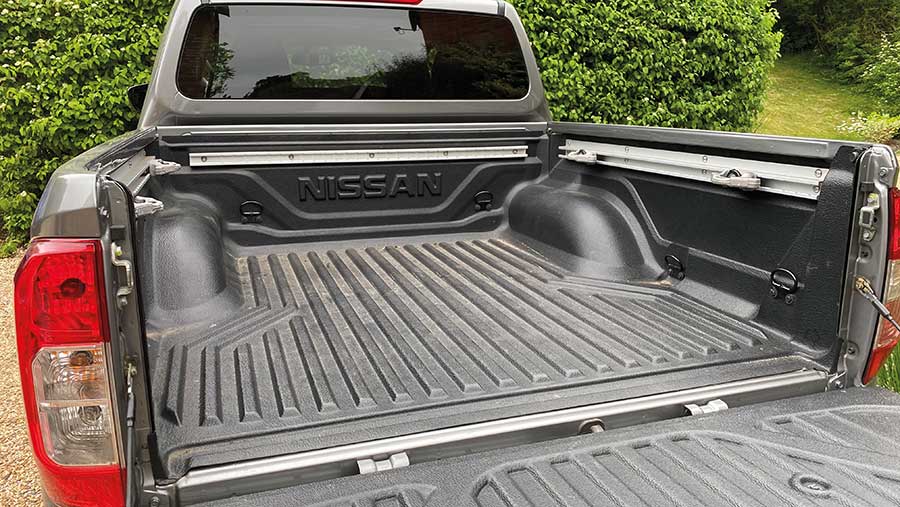 The bed is good for 1,115kg, though lash-down points on the deck will be no use for strapping down full loads.

Our model also had C-channel moveable tie-down points, which are more useful.