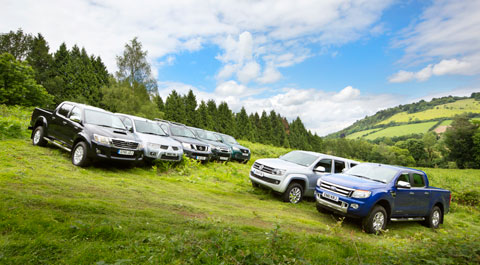 Wondering what pickup to buy? Our colleagues on Commercial Motor magazine gathered all seven makes in one place to compare their strengths and weaknesses. 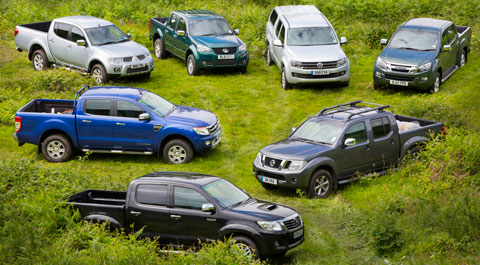 Bog-standard pickups are all but dead in the western world. The popularity of so-called “lifestyle” pickups has seen even the most unashamed workhorse models adorned with lashings of chrome or swathes of leather.

The demand for no-nonsense pickups is still there, though, and in many industries – particularly farming and construction – sales of entry-level, and even 2wd, models are strong.

How then, has this upscaling affected the vehicles on sale in the UK today? As you will see, even the most basic of 4wds now come with a high standard of specification, so you can have a rugged work tool during the week and a comfortable family vehicle at the weekend.

Matching each of the pickup trucks on sale in the UK with a similar specification is almost impossible, so we chose medium trim levels suited for the utility and weekend user.

The 2.2-litre Duratorq TDCi four-cylinder diesel produces 150hp and 375Nm torque, making for a solid and consistent driving experience. It’s matched by well-considered ratios that ensure the revs operate between 1,500rpm and 2,000rpm on A-roads and creep up to 2,100rpm at 70mph.

The tailgate is a little cumbersome due to its size and weight, but there is a plastic lining to protect the bodywork from the vehicle’s 1,077kg maximum payload, which can be secured using eight lashing points – four of which are adjustable.

Thankfully the interior is more car than van. The dash layout makes sense, storage is passable with modest door pockets and cup-holders, but the two-tier centre box by the driver’s left elbow will house a multitude of sins.

There is some reflection from the silver trim around the dash, and the steering wheel only adjusts for rake, not reach, but it is extremely comfortable to drive.

When reversing, the truck has parking sensors and a camera with a screen that appears in the rear-view mirror, which combine to make it impossible to hit anything unless you’re very negligent. In contrast, the front-end blindspot is significant, and is not helped by the poor turning circle that makes any hard-lock sweeping manoeuvre a bit of a lottery. 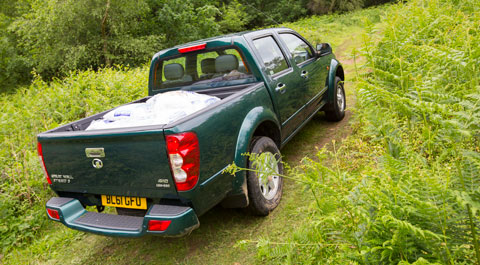 The Wingle, as it was originally called, has been in production since 2006, was launched in Australia in 2009. Now dubbed the Steed and assembled in Bulgaria, it is available in the UK.

Powered by a 2.0-litre, direct-injection, turbocharged diesel engine, which produces 105hp and 305Nm torque, and a six-speed box, it is the poor relation of this group test.

It falls down in several vital areas. The suspension is soft and lateral movement through roundabouts is excessive. The steering is lighter than it ought to be, and what little power and torque it has from the noisy engine is evaporated by the two overdrive gears. 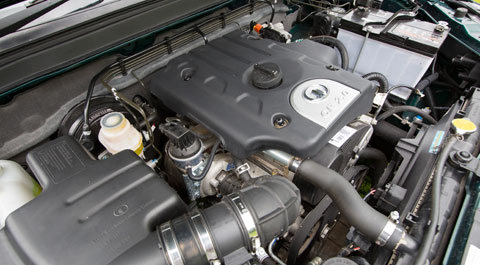 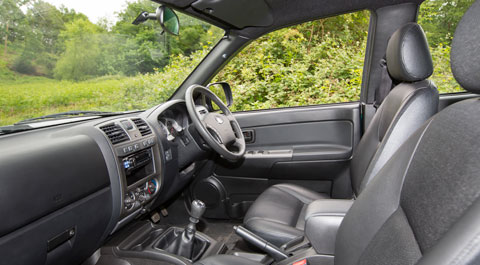 There is certainly no “foot down, feel the power” sensation that the bigger engines rivals posses, and when meeting a slower moving object you really have to be certain you have ample space to pass. Perversely, that lack of power probably helped the Steed in securing an impressive fuel economy, topping the tables with 37.3mpg.

Great Wall has produced a functional truck that will entice buyers, but it needs to up the ante with an engine that has more oomph, better chosen gear ratios and improved in-cab materials. 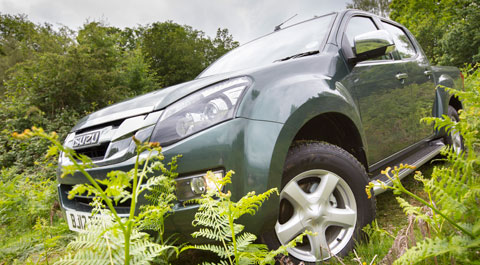 Isuzu has a grand plan to be number one in the UK utility pickup market and has laid out its stall accordingly with the replacement for the Rodeo, the new D-Max. Targeting agricultural and construction customers with attractive pricing for entry-level 2wd and 4wd vehicles, the D-Max appears to be a great value proposition.

Base models get air-con, electric windows and six airbags among the standard equipment, while power comes from a 2.5-litre twin turbocharged common rail diesel engine producing 163hp and 400Nm of torque. 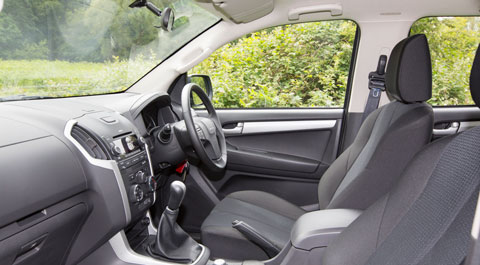 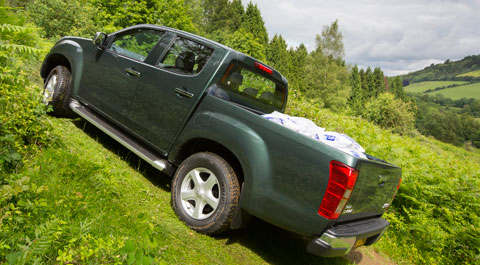 It’s a hefty package, and one that appealed to our test team who scored the D-Max highly for many of its mechanical components including its engine and ride comfort. Our testers also found it particularly impressive off-road thanks to the wealth of torque and sensible gear ratios.

Commended for its overall visibility, the D-Max feels noticeably smaller than many of the other test vehicles. Although this didn’t reflect in the manoeuvrability scores it received on the road, it did help off-road where the slower speeds and the D-Max’s ability to find traction on wet gradients made it the top performer in the dirt across all three scoring categories.

However, some of the interior plastics were less well received, as was the usefulness of the dash storage and the clarity of the instrument displays. 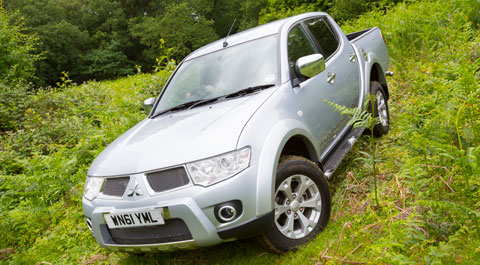 With its macho Barbarian trim styling, the L200 was one of the most desirable and distinctive of the old-guard pickups. Its rippled bonnet, angular-yet-sleek curves and dashes of chrome detailing still look fresh in the line-up. Now that it is also Euro-5 compliant, its 2.5-litre 173hp engine should do the business on paper.

On start-up there is noticeable vibration through the seats and steering wheel, but once on the move the engine settles to deliver 400Nm of torque from 200rpm. It feels adequate without being exceptional, and must be kept within the sweet spot of 1,800-2,300rpm, but is more than capable of hauling the vehicle, driver and 50% payload up a steep incline on tickover in low range. 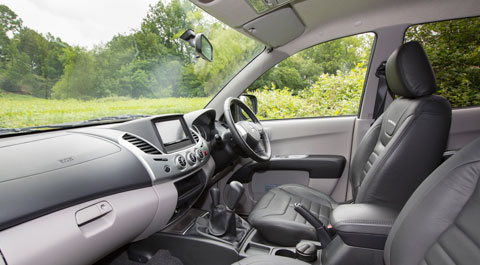 With only five gears the L200’s engine feels more stressed than its rivals as you progress up the gears, a point that was reflected in the overall cabin noise where the L200 is consistently among the noisiest.

The testers praised the Mitsubishi for its positive gearshift but found the low-range box hard to engage at times and its gearing to be too short. It scored average marks in most categories, and is perhaps best summed up by one tester who labelled the L200 “a workmanlike vehicle that does most things competently”. 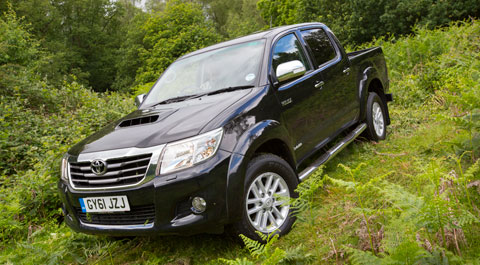 The five-speed torque converter auto on the Hilux delivered smooth shifts but there are just not enough of them. As the speed increases, the gearbox hangs on to the ratio, refusing to shift up until around 3,000rpm. The only respite comes when the gearbox hits its long-striding fifth gear, allowing the engine speed to settle around 2,100rpm at 70mph.

Power of 169hp and peak torque of 360Nm are not as much as you might expect from a 3.0-litre commonrail diesel, and the auto box spoils what is available. However, the peak torque plateau is wide, stretching from 1,400rpm to 3,200rpm, promising good flexibility. Indeed, the engine pulls quite strongly from 1,400rpm, so it would have been good to exploit that with Toyota’s five-speed manual gearbox. 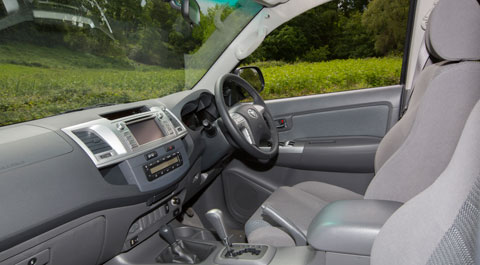 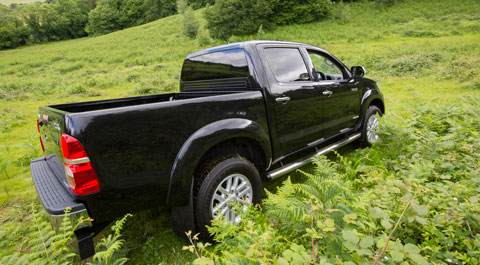 The loadspace lacks any real winning features. The load height is higher than most, there is no lining or protection as standard, while the interior proves that you can’t please everyone. “Fussy instrument markings and too many switch blanks,” said one tester, of this top-of-the-range Invincible model, which comes with all the bells and whistles. Others saw fewer problems and commended the interior for its “rugged” feel.

So, what did we like? Steering and handling was reasonably good, disguising what is quite a bulky vehicle, and the ride comfort was pretty decent too, both in terms of the seat and the suspension. 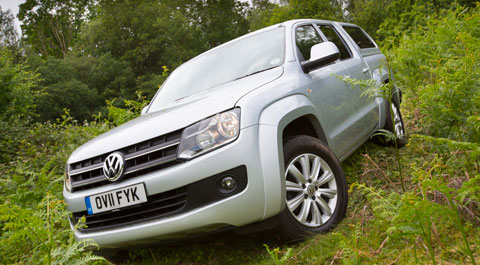 VW’s first foray into the UK pickup market since a Golf-based truck in the 1980s has gone down rather well. With a 2.0-litre engine giving it the joint-smallest capacity of the group, you might think that the Amarok would be down on power. But thanks to two turbos the VW develops a healthy 161hp, overshadowing the power produced by the single-turbo Great Wall 2.0-litre engine.

As well as being more powerful than the Steed, the Amarok engine is also significantly more refined, proving quieter and more flexible throughout the rev range with peak torque arriving at 1,500rpm. Ride comfort is particularly good during on-road driving, and so too is the Amarok’s handling which is sharp and communicative, linking this enormous-looking truck capably with the road. 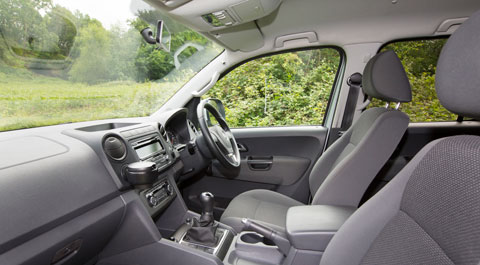 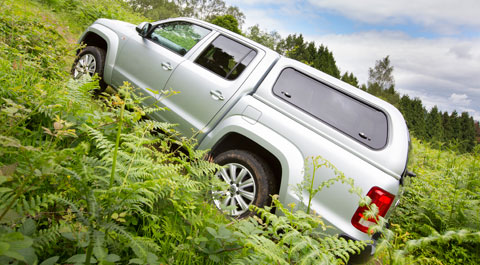 While on-road performance is exemplary, and off-road traction is good, its size make it less nimble and gauging the landscape harder. On the inside, the Amarok feels extremely car-like with a clear dash and control layout centred around the driver.

Its biggest weakness is perhaps its size, and while gadgets such as parking sensors help, there’s no escaping the fact that the VW feels heavy and vulnerable off-road compared to some of its rivals. 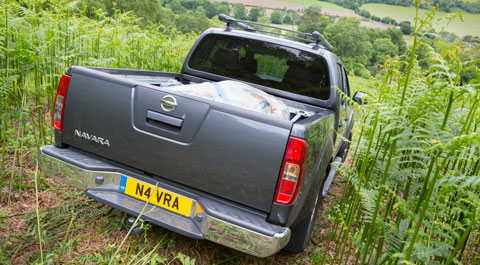 The Navara impressed everyone who drove it, thanks largely to the performance from its punchy, 2.5-litre commonrail engine with a stonking 188hp and 450Nm, coupled to a smooth-shifting six-speed manual gearbox.

The torque allows the Navara to potter along at 30mph in fifth quite happily, with engine speed just below 1,300rpm. It’s up to almost 2,500rpm in sixth gear at a true 70mph but the engine remains quiet and refined. The serenity of motorway cruising is spoilt only by some wind noise from overhead, emanating either from the roof-rails or sunshine roof. 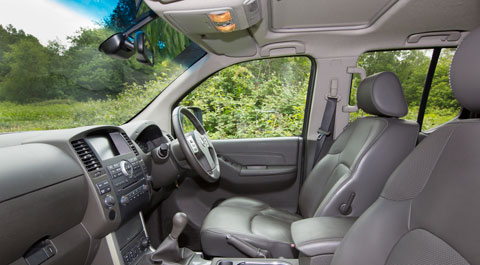 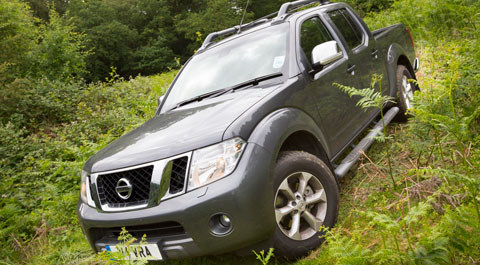 Opinions about the Navara’s interior were all positive, with praise for the styling and perceived quality of the materials. The dashboard layout is attractive and logical. Only the radio controls seem unduly complicated and scattered, and storage space is not quite as generous as in some.

There were good marks for the Navara in the comfort department, with a pleasant ride and highly praised seats. The latter are electrically adjusted, a nice but unnecessary touch that can prove expensive in the event of failure.

The loadbed is low and the load-restraint system features tracking that allows the position and number of lashing points to be adjusted.

Our group test winner is one of the oldest pickup trucks on the market – a shock result, perhaps, but the Navara has matured like a fine wine amid fierce competition.

The freshness of the Ford Ranger and Volkswagen Amarok have mounted a serious threat to rivals in the sector, not only with their bold looks but also their technical wizardry that enables even the most inexperienced of off-road drivers to easily tackle some seriously challenging terrain.

All of the vehicles tested proved to have exceptional abilities off-road, however, the ease-of-use demonstrated by the newer vehicles allowed them to have a slight edge over the competition.

It was the no-nonsense Isuzu D-Max that excelled the most off-road thanks to a sensible engine, transmission and size combination, but the powerful Navara – still a technologically advanced machine considering its age – was almost its equal. It was the Navara’s consistent performance over the 350-mile road route that endeared it to our testers the most, though, leading them to score it generously in nearly every category. 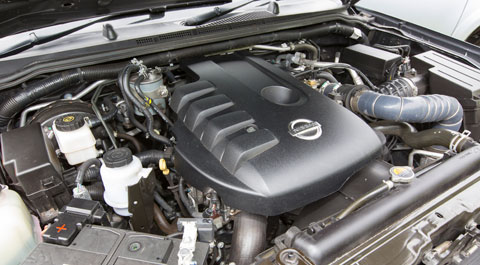 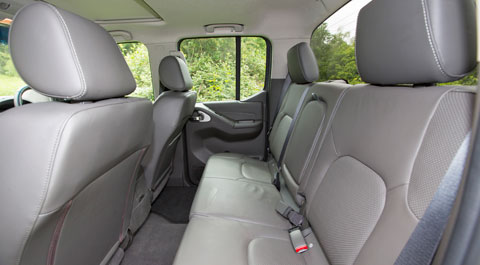 While the Navara’s highest Outlaw trim level epitomises the lifestyle values that made this segment experience such a boom, this slightly more modest Tekna model blends a high specification of equipment with raw 4wd ability. At £21,871 it is expensive but, had we tested a cheaper version, the result would have been the same, such is the quality of the Navara range.

The Nissan was not the only vehicle to impress our testers, and honourable mentions should go to the Amarok and Ranger which ran a close battle into fourth and third respectively.

But it was the Isuzu D-Max that really impressed the test team. Its enjoyable driveline delivered on fuel economy while the interior blended comfort with practicality and robustness and, for those that want to tow, it also offers the second-largest towing capacity of the group, bested only by the Ford Ranger.