Earlier this year, Land Rover signalled its determination to cash in on the deep allure of its British heritage by launching the most expensive Discovery ever built.

It will now take a near six-figure sum to land a top-ranker that still weighs 2.2t, slurps fairly heavily from the fuel tank and is almost as ungainly as a tractor in a supermarket carpark.

Those rather crude dimensions are unlikely to bother countryside dwellers quite so much, but the Discovery is no longer simply the heavy-hauling farmers’ choice.

Instead, this rather gentrified relative of the Disco 4 has made a giant leap up the 4×4 food chain where it will be holding company with the likes of Porsche, Audi and BMW.

To that end, it can now be seen wearing 21in alloys and has a cabin rammed engine-to-exhaust with gadgets, where luxuries extend to massaging front seats, onboard televisions and a 14-speaker sound system.

Reviews on its outer shell have been mixed. It’s most notable for its large size, which isn’t always the most attractive of automotive qualities.

The smooth, curvy lines up front are Range-Rover-esque and a conspicuous departure from the breezeblock-like build of the old Disco 4.

Unfortunately, the rear end is more of a pig’s ear. The big panels seem less carefully sculpted and the lack of symmetry – so long a hallmark of Discovery-badged vehicles – looks plain weird.

Such has been the furore around the offset plates that Land Rover’s design director, Gerry McGovern, recently put the blame of ugliness at the feet of dealers fitting the wrong-shaped numberplate.

However, it’s also easy to be hasty in judgement – radical change often results in a startled response and, though it’s agricultural ties are weakening with every new generation, it’s still a smart, and undoubtedly capable, 4×4.

The one major concern is size. For passengers, it means almost unrivalled cabin space but, for the poor old driver trying to squeeze its 5m long, 2.2m wide body into a Micra-sized parking space, life can be stressful.

Those burdensome dimensions make it bigger than its predecessor, although improvements in camera and sensor technology on the higher-spec models should relieve at least some of the trauma. 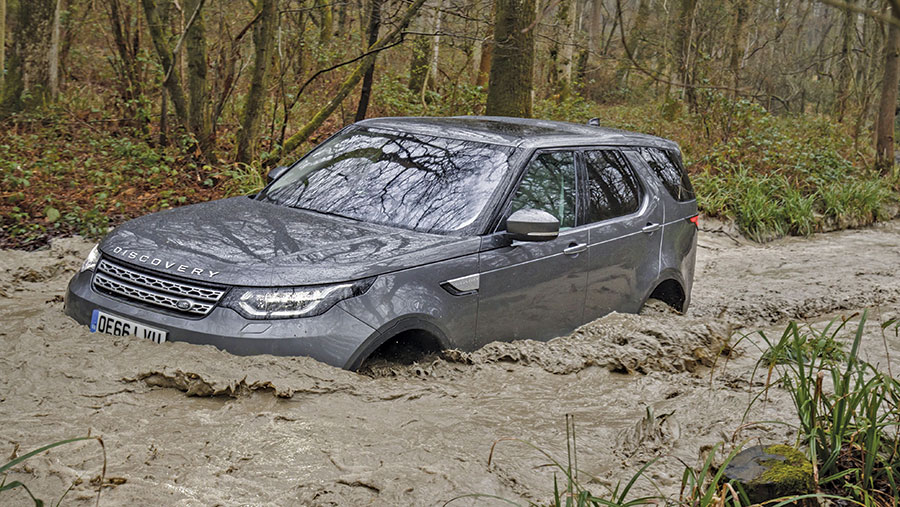 Despite the growth both upwards and outwards, the latest incarnation is actually almost 500kg lighter in some cases – down to 2.2t empty – thanks to a new 85% aluminium body.

However, it’s hard to see past the three-litre V6 block of our test vehicle, which sings to the tune of 258hp and is fed by a gargantuan 85-litre diesel tank.

In reality, its straight-line speed is no more than a match for the Amarok pickup we featured earlier in the summer (and well behind the likes of Audi and Porsche, for that matter), but there’s plenty of low-rev power and it’s in a different stratosphere where comfort is concerned.

Bumps disappear, cornering is crisp (if geared a little slowly) and drivers will rarely find themselves shaken from their soft, leather pew.

An eight-speed auto gearbox – along with the four-corner air suspension – can claim responsibility for a good chunk of the new-found smoothness but, unfortunately, consumption falls a little short.

A week of mixed driving delivered a sub-40mpg stat, though it was still a respectable improvement on its juice-slurping predecessor.

Upholstery takes the form of fine cloths, leathers and plastics, and the untrained eye will struggle to note any obvious shortcomings compared with the even more opulent Range Rover.

There are four trim levels – S, SE, HSE and HSE Luxury – of which your choice will be determined largely by the size of your wallet.

All offer levels of refinement and quality to leave pickups looking like veritable tin cans, but it remains a delicate balancing act for Land Rover; always conscious of treading too heavily on the toes of its chums at Range Rover.

Seven seats are standard though, and top-speccers are geared-up to provide such luxuries as air-conditioned cooling through pinpricks in every leather seat from front to back.

They also fold down electrically, as do the headrests and the tailgate. It’s all good fun but, with Land Rover’s unremarkable reliability record, they might not be such a laugh 10 years down the line.

Drivers get an improved touchscreen, while their friends can also have their own television screens along with a load of USB chargers, 12-volt ports, a fridge and cubbies for drinks, phones and sweets. 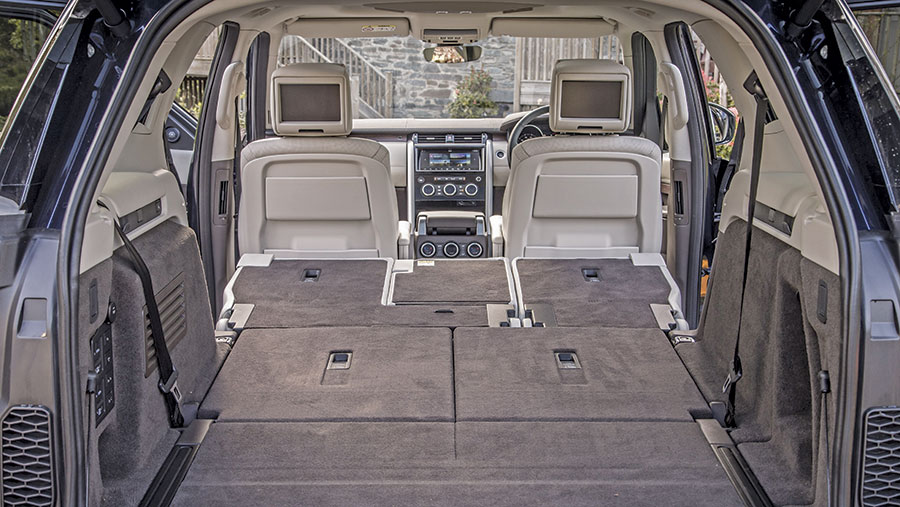 Of course, that gear isn’t cheap and Land Rover will happily provide some open wallet surgery for any obliging customers.

The television package is £880, a head-up display is £1,035, leather massaging seats are £870 and it’s another £835 if you want to provide your pals with heated and cooled chairs in the back.

For farmers, the £985 tow bar will be of greater interest.

As ever, the off-road stats make for good reading.

Fording depth is 900mm, there’s 284mm of ground clearance and the air suspension will let you jack the body up and down at will. There’s also the option of a two-speed transfer box for low-range gearing.

The great irony here, of course, is that most buyers in this price bracket won’t see anything more than a speed bump (which it is capable of dealing with just fine).

The Disco 4 is now an ancient relic, but where this leaves the relationship between the new Discovery and the Range Rover is less clear.

With a V6 entry-level price loitering about the £50,000 mark, many buyers will be left to pick through the second-hand market or consider something less lavish.

On the plus side, the new Defender is in the workshop and could well fill the void of the Discovery 4. We’ll be waiting with bated breath.