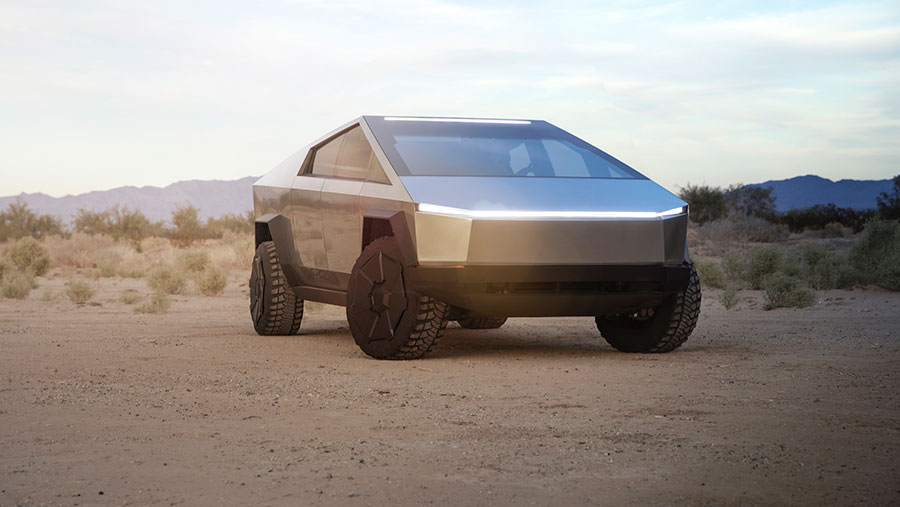 Electric car company Tesla has launched a Back to The Future inspired Cybertruck pickup with a design that has torn up the conventional pickup rule book.

Hawthorne, California, was the venue for the ambitious launch event, which included a video of the Cybertruck winning a tug of war with a Ford F-150 and outpacing a Porsche 911 in a drag race.

There are three model options that use the firm’s latest V3 technology to help long hauls and towing work.

A single-motor rear-wheel-drive offers 250 miles, and the all-wheel-drive dual or tri motors have 300- or 500-mile ranges, respectively. The biggest model claims to reach 60mph from standing in just 2.9sec.

See a video of the vehicle in action and read the review below.

The radical design has used ultra-hard, cold-rolled stainless-steel alloy for the body work. The upshot of this is that the impact of a sledgehammer has no effect on it, while 9mm bullets can also be kept out.

There are clearly a few issues still to be ironed out before the sale date of 2021, though.

During the launch, Tesla owner Elon Musk asked the firm’s head of design, Franz Von Holzhausen, to throw a metal ball at the supposed armoured glass.

It shattered both windows. Mr Musk said there is still room for improvement.

The Cybertruck gets enough room for six seats inside, and has a huge 17in screen up front that dominates a sparse and minimalistic cabin.

The chassis has taken on an exoskeleton design, as it doesn’t need to accommodate a conventional engine, which has opened up various design possibilities, helping the load bed length extend to 1.9m. 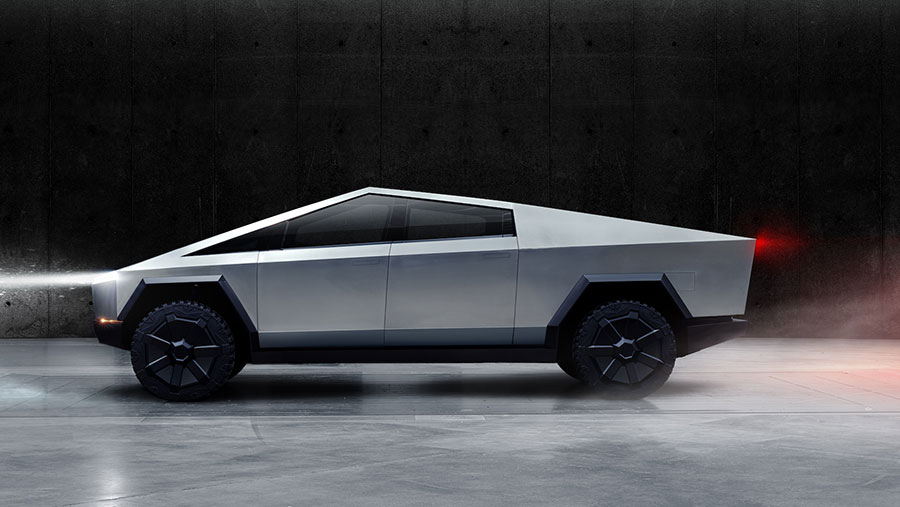 Towing capacities look to be huge – a 6,350kg limit has been placed on the biggest motor, with a payload across all models of 1,587kg, comfortably outdoing anything on sale today in the UK.

It is unclear, however, whether it will make it across to Europe with these credentials, and what effect hauling this weight around would have on the range.

The air suspension has a 100mm travel in either direction, and Tesla has tapped into the air feed to add an on-board air compressor.

As with Tesla cars, the truck can self-drive and park itself through the autopilot, and there is now a trailer docking function.

At the end of the launch, Mr Musk revealed an electric quad bike that handily slotted straight into the back of the Cybertruck, although few details were released on this.

It’s fairly clear that this truck isn’t aimed at the working market, but there would be little surprise to see one appear in the Lamma car park once it’s released in 2021.