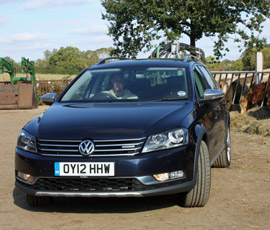 Nineteen-seventy-three was the year Roger Moore shot baddies in Live and Let Die, the Sydney Opera House was opened and Pink Floyd’s Dark Side of the Moon album tore up the charts.

It also happened to be the year that Volkswagen’s Passat was born. Fifteen million cars later (though not quite enough to rival David Gilmour and Co’s 150m record sales) the seventh edition of the Passat includes a four-wheel drive variant – the Alltrack.

The ultra-versatile, big-booted estate is out-selling its saloon counterpart. You also get a bit more for your money compared with buying an all-the-rage SUV and an estate is about as frugal as a 4×4 gets.

Apart from the obvious raised ride height and addition of four-wheel drive, the Alltrack has been beefed up pretty subtly.

It might not look as hardcore as an out-and-out 4×4, but that also means it can do things that others can’t. Acres of boot space and almost unrivalled on-road ability are the Alltrack’s prized assets.

The doors swing shut with usual VW aplomb, but inside the cockpit is lacking the inspiration factor.

Dash finish is better than average – no more than you’d expect from VW.

Touches of brushed chrome jazz it up a little and a dash-mounted clock is a welcome addition. An assortment of off-road related buttons surround the gear stick.

In the back you can have clever integrated booster seats (no prizes for guessing the Alltrack’s target market).

Pull a toggle and the base of the seat pops up by about eight inches, while a brace slots either side of the headrest so the kids don’t fall off the seat when they nod off to the calming murmur of the diesel.

A conservative 2-litre is all that’s on offer in the engine department.

It’s mated to a six-speed box. There’s 140hp on the table for the manual version, while in its automatic guise it gets 170hp. Incidentally, VW expects the manual to account for about 60% of sales.

The smaller 140hp engine does particularly well on fuel. Quoted combined consumption is 49.6mpg and for once the handbook isn’t fibbing – we notched 55mpg during motorway cruising.

The downside to the engine size is its liveliness (or lack of). There’s plenty of oomph for tootling but it lacks real bite for the hard towing jobs. Towing capacity is 2t, which is actually a 200kg improvement over its predecessor.

On the road you get the benefits of front-biased four-wheel drive. Power is sent to whichever wheel shouts the loudest should the car struggle for grip. During normal driving the front axle saps 90% of the power to keep a lid on fuel consumption.

A gander at the spec sheet suggests that the Alltrack might even be a serious mud-plugger. All sorts of acronyms are used to big up its off-road potential – XDS, EDS and ESPs all sound brain-numbingly clever. It’s also been jacked up by 30mm (under-belly clearance is now 165mm).

In reality, though, it’s not serious about off-roading. It’s best work is done on flat, hard, tarmac roads.

Here the smoothness of gearshifts is second only to a baby’s bottom and the steering is as sharp as a pickpocket’s fingers.

Auto-dipping headlights, lane change assist and an electronic differential lock (that works by applying pressure to the inner front wheels during fast cornering to prevent wheel slip) mean that pretty much all the driver has to do is stay awake.

It’s less vocal on the road compared with rivals like the Volvo XC70, too.

Competition in the Alltrack’s target market is fierce. Popular SUVs like the opinion-splitting Range Rover Evoque and estate rivals like the A6 Allroad from fellow German firm Audi wear a more fashionable badge.

But the Alltrack is screwed together with conviction and that’s why we like it.

See what we thought of VW’s flagship 4×4, the Touareg.