This month’s Tillage-Live event at Wickenby Airfield, Lincolnshire, gave visitors the chance to see lots of the latest drills and cultivators in the ground. 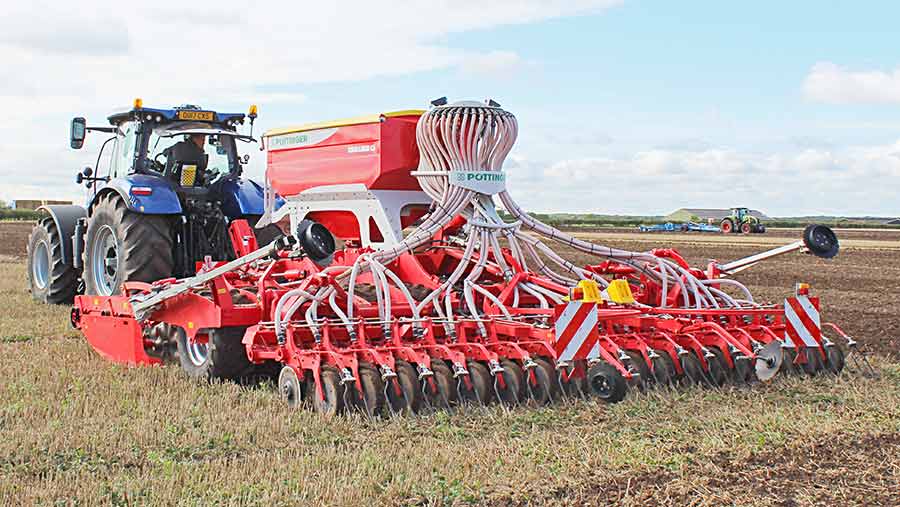 The perennial blackgrass scourge has seen a significant rise in the number of low-disturbance drill modifications, such as Pottinger’s recently launched Terrasem Wave Disc.

This is based on the standard Terrasem platform, but replaces the front gang of cultivating discs with a set of lighter-weight wavy discs.

According to Pottinger, these move just a third of the soil across the drill’s working width, giving blackgrass less opportunity to germinate between the rows.

There are two different coulter spacing options too. The wider 16.7cm version gives greater trash clearance, while the narrower 12.5cm reduces the amount of space in which the grassweed can flourish.

Because the drill is leaving two-thirds of the field untouched, the power requirement is down too. That means the 6m drill can be pulled with a 200hp tractor on light ground and 300hp on stiffer stuff.

Prices are slightly lower than the standard drill, with the 6m version coming in at £95,041. 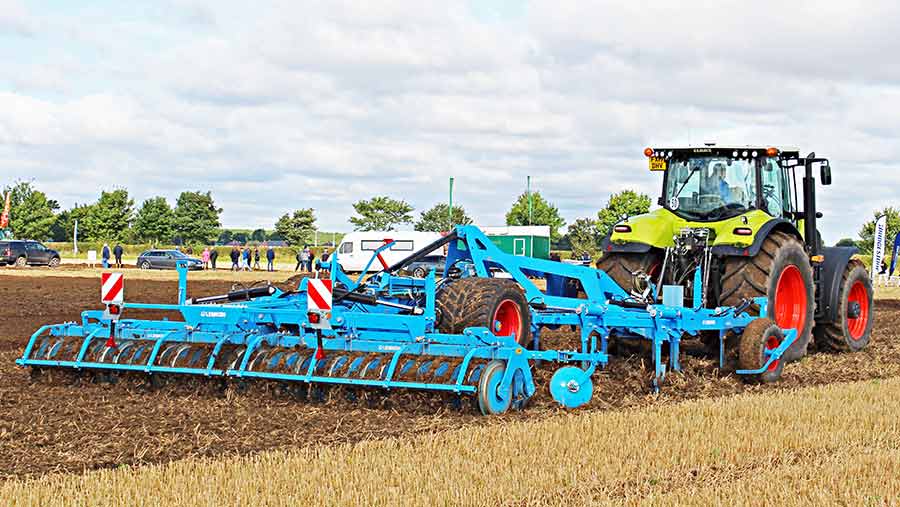 For those working the heaviest of ground, Lemken has launched a more-intensive version of its popular Karat 9 cultivator.

The Karat 12 comes with four rather than three rows of cultivating legs, which brings the individual leg spacing down from 27cm to 22cm. This gives more aggressive cultivation and more thorough mixing of soil and trash.

As with the less aggressive model, the Karat 12 is designed to double up as a shallow stubble cultivator and a deeper-working tool for seed-bed preparation.

That means it also comes with a set of rear mixing discs and a choice of rear packers, which often come in the form of a double rear press in the UK.

There’s also the option of a system called ContourTrack, which uses sensors on the front depth wheels to control a ram on the rear packer. This effectively causes the cultivator to bend in the middle, allowing it to snake its way over contours without digging in.

The Karat 12 is available in 4m, 5m, 6m and 7m working widths and the popular 4m and 6m machines need about 250hp and 350hp on the front respectively. 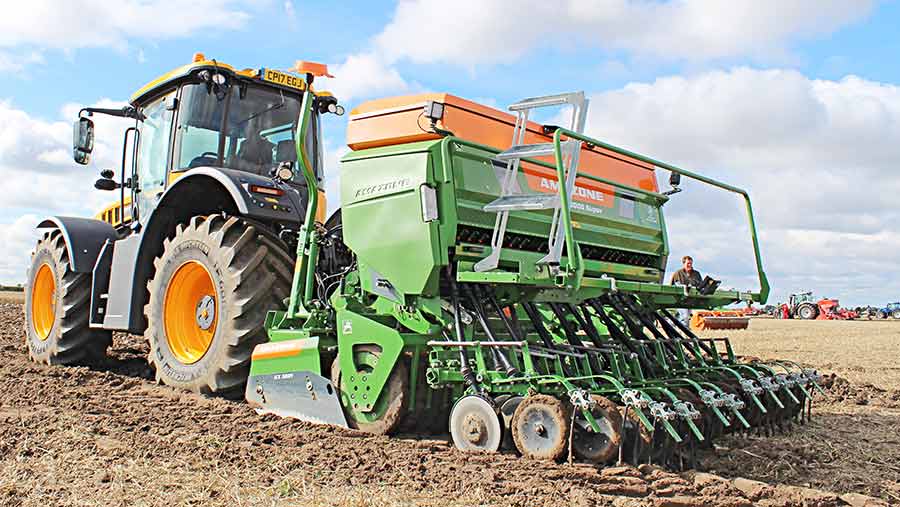 As standard, the drill comes with an 830-litre hopper, but there’s the option of adding a 440-litre extension to bring it up to 1,270 litres. Electric metering is also fitted, as well as a one-touch calibration system. All this brings the list price for the machine pictured to about £45,000.

Those looking to spend a little less cash will soon have the option of the newly launched Cataya Special. This will have a slightly smaller hopper, fewer of the clever features and a correspondingly lower price tag. 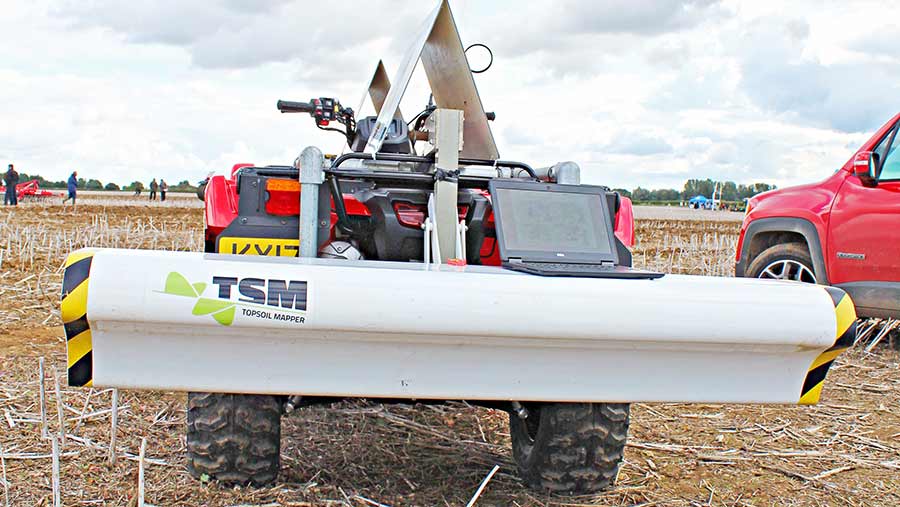 Soil mapping has just got a bit more high-tech, thanks to the addition of a higher-resolution conductivity sensor to Soyl’s fleet.

Since 2005, the firm has been using Dualem machines to measure variations across a field, such as soil type, compaction, water-holding capacity and stone content.

But because there were only two sensors on board, these could only measure two of these variables at a time. Now, the firm has added the Topsoil Mapper machine to the fleet, which has four higher-resolution sensors and is capable of mapping all of these in one pass.

The Topsoil Mapper can also be used for on-the-go, variable-rate subsoiling. In this role it constantly monitors the depth of compaction and sends a signal to the subsoiler to adjust accordingly.

For those wanting to purchase one of these sensors the price is £25,000. 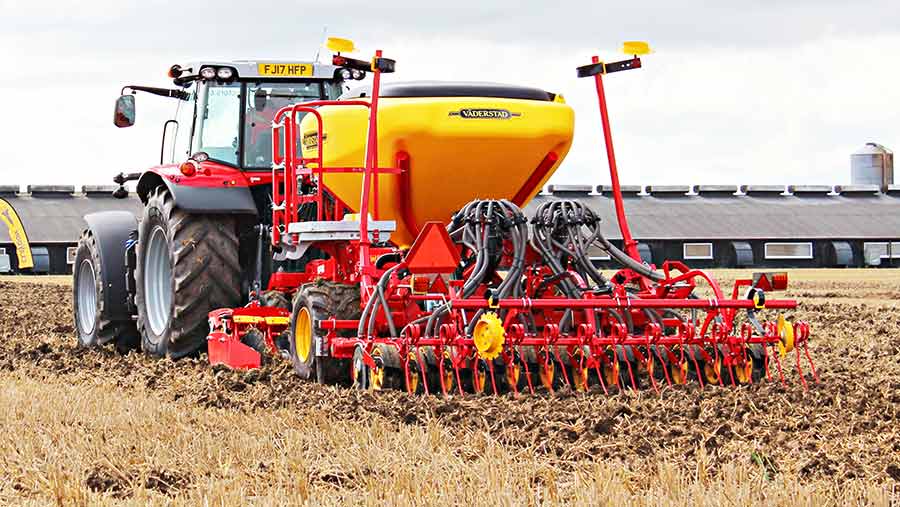 Vaderstad might be better known for its high-end drills and cultivators, but it has also got its sights firmly set on would-be combination drill buyers.

At £38,000 its Spirit R300S is similarly priced to some of the higher-spec power-harrow-mounted machines, but apparently offers considerably faster working speeds.

First unveiled in 2015, the 3m Spirit R model uses the same coulter assemblies and twin cultivating discs as the larger drills, but it sits on a much lighter and simpler frame.

This is based around a single-beam chassis that has the air pipes rooted through it to cut down on clutter. There’s also a plastic seed hopper fitted to cut down on both weight and manufacturing costs.

According to Vaderstad, the drill will work on ploughed ground, non-inversion tillage and is also capable of direct drilling on some lighter soils. The 3m version needs about 150hp on the front and it can thunder along at speeds of up to 15kph.

The drill can be operated with a standard terminal, through an Isobus connection or with the firm’s iPad-based control system. 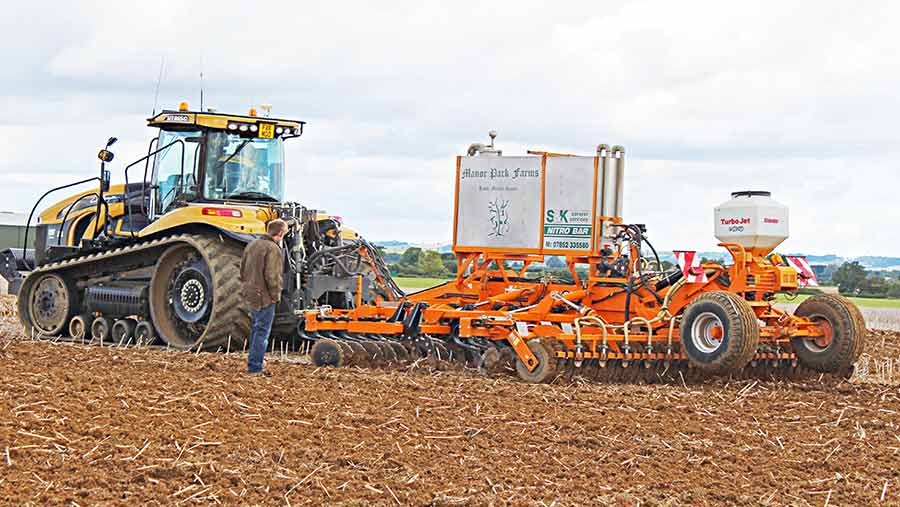 Local wearing metal specialist Agricast had to travel all of one mile to demonstrate its newly developed points at Tillage-Live.

The Low Disturbance Extra (LDX) units fit directly on to Simba and Great Plains machines – plus most others with a bit of modification – and apparently last twice as long as the standard versions.

That’s due to them containing considerably more metal at the main wear points and the fact that they have a higher tungsten content.

The former Simba official parts supplier was also showing off a 6m SL drill that had been heavily modified for oilseed rape drilling.

This was fitted with new lower-leg assemblies featuring the LDX points and 5in wings. The owner had also removed the auto-reset springs and replaced them with solid shearbolt-protected braces to allow deeper working.

On top of that, Agricast had provided a set of smaller-diameter 460mm discs (to allow the legs to drop in further) with less aggressive scallops and a shallower concave for less soil movement. Together, the 48 discs and 14 lower-leg assemblies fitted to the drill add up to about £3,000. 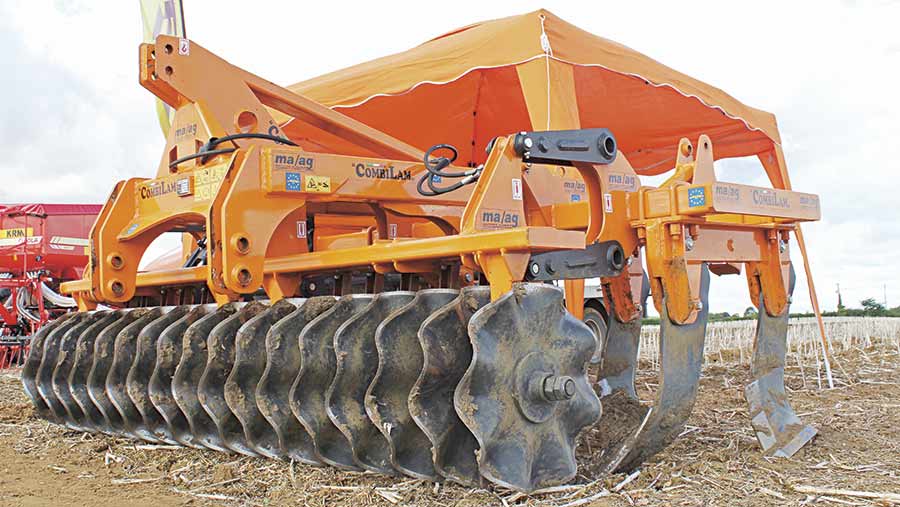 This Italian-built low-disturbance subsoiler could be found lurking on the stand of Yorkshire importer Ryetec.

Called the Ma/Ag Combi-Lam, its curved subsoiler legs are designed to work at depths of up to 50cm without inverting too much soil or bringing up clods.

These are mounted in two rows and are flanked by a single set of large-diameter wavy discs at the front and a twin set of smaller-diameter discs at the rear.

The front set are designed to chop and incorporate trash while working soil to depths of up to 15cm, while the rears tidy up any lumps that have been brought up by the legs, leaving an even finish.