Looking for a decent second-hand self-propelled forager? Nick Fone gets some expert advice from the team at Western Harvesters 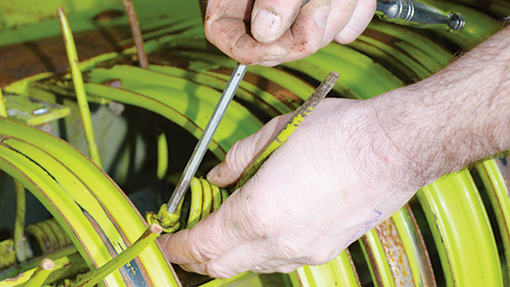 Pick-up tines are the things that will most commonly need replacing. Although not expensive individually, a full refurb can soon add up. Check cam follower bearings for excessive play, too.

On the back of the header, check the main drive chain is adjusted up and that there’s enough travel in the tensioner to take up excessive slack. If it’s out of travel then it’s likely sprockets are worn and will need replacing. 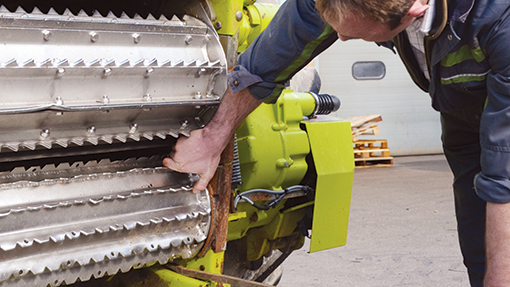 Next, whip the header off. The feed-roller condition is a good indicator of the sort of life the machine has had and some bent teeth are to be expected.

Use a decent-length pry-bar to check for play in the feed-roller bearings. Since they are held under spring tension, there will be vertical movement. So as you’re waggling the bar, look around to the outside of the housing at the bearing shell.

While you’re there, take a look at the “kidney” gearboxes to check for leaks. These are constantly jolted about while in work, so some seepage is inevitable; the usual solution is to fill with grease.

Most internal bearings are sealed units so it’s just the gears that require lubrication. If auto-lube is fitted, check for leaks as this will mean essential grease hasn’t been getting to the bearings. 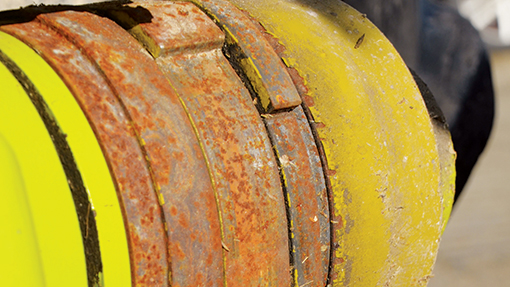 Foragers of this age tend to have three overlapping magnetic fields – left, middle and right – so try the extreme edges as well as dead centre.

With safety in mind, a piece of cardboard with some MIG wire pushed through it and left in the header should be enough to trip the system when it is engaged.

Inspect the drive pawls on the metal detector clutch for wear, too. They should have clean, sharp edges with just 1mm clearance between them and the spring-loaded stops. 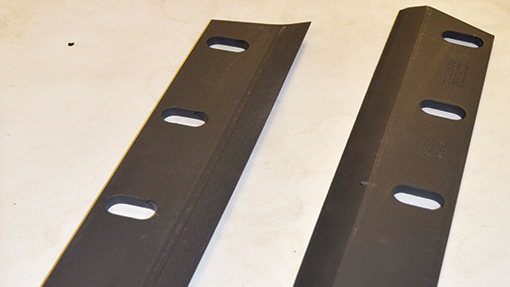 With the header reattached and the feeder housing unlatched, lift it to allow access to the blades and drum. Most obviously, look for evidence of the machine having swallowed something nasty and then inspect the blades and shear-bar for wear.

The hard-facing on each knife is 20mm wide when new so you can get an idea of how close they are to being replaced. The amount of travel or threads showing on the shear-bar adjusters can also give a good idea of blade life.

Depending on drum design, blade hangers can be prone to wear, too. Generally you’ll expect to see wear on a Jaguar after 6,000 hours’ work. The bottom concave will tend to get thin after 1,000 hours. It’s difficult to assess how far gone it is – you’ll hear a ticking noise when it has started to get thin and is beginning to distort. 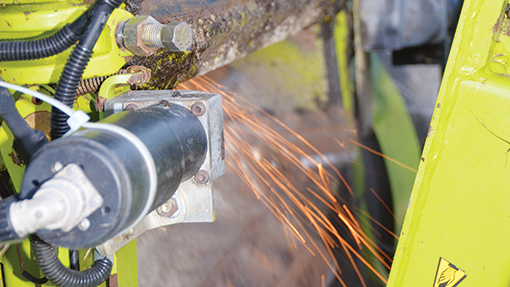 As a general rule, one side of the shear-bar will last one set of blades. Check that the bolts are secure and it doesn’t have excessively rounded edges.

Run a sharpening cycle and make sure the shear-bar automatically winds in and out as it should and that the knock sensors are working (with the exception of Krone, which prefers operators to do this manually by ear). 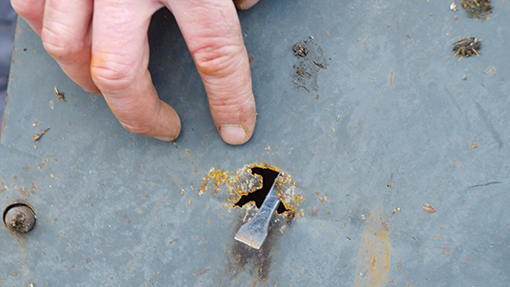 The space between the cylinder and accelerator is filled by a transition chute “grass box” when the cracker is not installed. This is a wearing item so check for holes.

Also, on the corn-cracker/kernel processor – look at the ridged rollers for wear and spin them freely to check for noisy bearings. 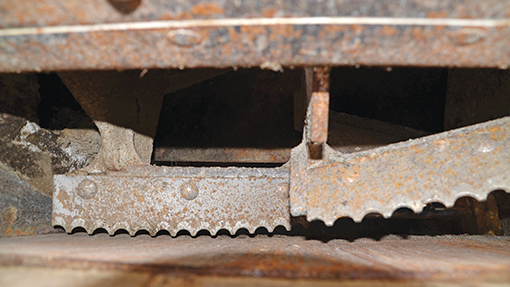 Running at twice the speed that the cylinder spins at, the accelerator has much more potential for flex and bearing wear. Engage the chopping cylinder, rev the engine, then knock the drive out and let the engine return to idle before shutting it off.

As the machine runs down you can listen for anything untoward. If you can hear high-speed vibrations from the accelerator and rumbling as it slows down, the bearings are probably on the way out.

Scalloped paddles will generally do a full season but do need changing as the serrations become less pronounced. 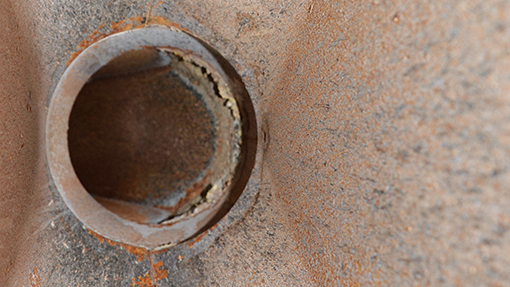 As the crop channel narrows from the blower to the turret, there’s a lot of material being squeezed through a small space.

Whip the back-plate off and feel up inside the top of the funnel for burred edges and any signs the liners are beginning to wear thin and fold over. Coach bolt heads on the liners will give a good indication of how close to the wire they’re getting. 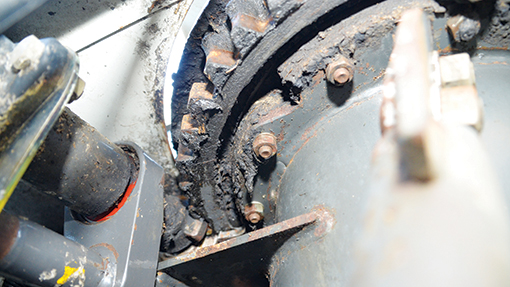 The ring gear around the top of the turret has a tendency to wear over time. Get up on the back of the machine and give the chute a good waggle up and down, making sure you’re not mistaking it for slop in the lift ram piston and pins.

The way to deal with this is to remove the ring gear and have its face machined level once again.

The other place for wear is the bearing between the hydraulic chute rotator motor and the worm drive for the ring gear. Replacing this annually can prevent a mid-season breakdown. 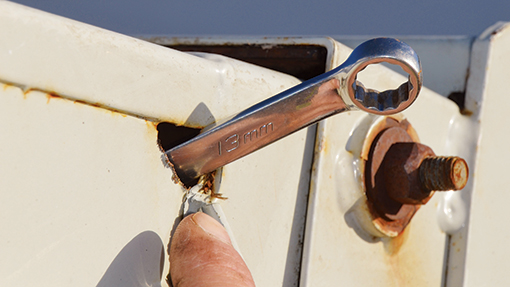 It’s the mid-section of the upper chute liner that tends to give out first but, with side-loading often only to left or right, there’s also a tendency for one particular side-liner to wear much quicker than the other. Either way, it’s generally spout blockages that give the game away that a hole has developed.

At the flapper end, check for wear to the main chute itself at the point where the liners end. 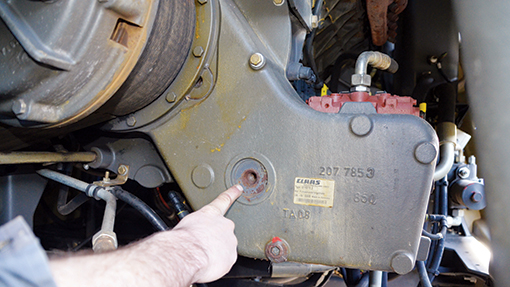 The main gearbox on the side of the engine that splits drive to the chopping gear and transmission handles a lot of power, so its scheduled oil changes should never be overlooked. A strip and rebuild of this box would be worthwhile at about 3,000 hours, particularly if there is no evidence of the shafts (looking like core-plugs) on which the idler gears mount having being disturbed previously.

Also look at the main powerband and check the clutch unit for signs of overheating. 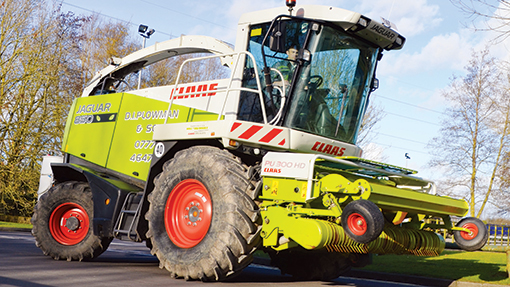 Run the forager up the road and check it gets to top speed without struggling. Once it’s hot, stand on the brakes (or use the handbrake) and gently ease the stick forward.

You should hear the engine start to labour as it comes under load. If you can’t hear it, then it could be a sign that the transmission is starting to weaken with age.

Look out for leaks. Check the radiators for blocked cores. When you fire up the engine expect a bit of black smoke, but if there’s a constant stream then the first place to look will be the intercooler hoses.

If it’s white then there might be water getting across the head and if there’s a plume of blue then it’s probably burning oil. 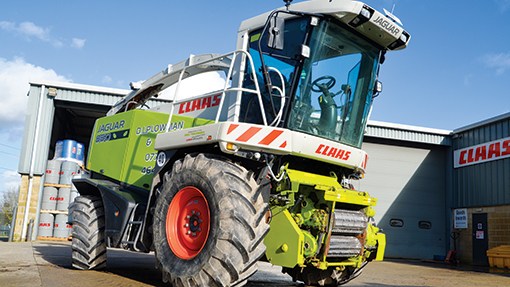 Comments: Solid, time-proven machine. Very popular, as anyone who’s ever had anything to do with a forager is likely to know their way around one. 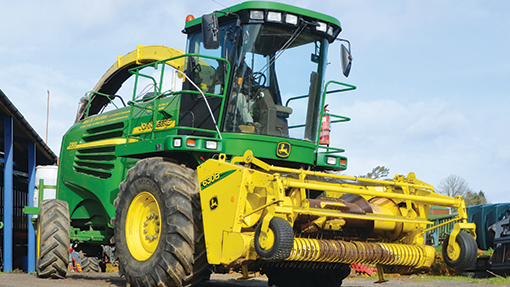 Comments: Very low-houred for its age, but the least powerful in the line-up. Represents a lot of metal for the money 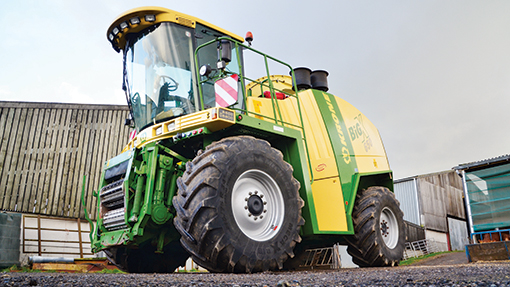 Comments: The biggest, most powerful contenders. Big Xs are packed with electronic wizardry and tend to be highly specced – expect relatively high hours for a high-output machine. 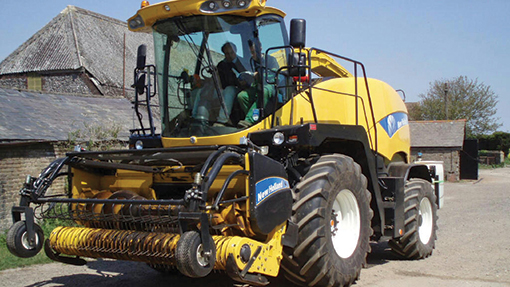 Comments: Launched in 2007, the FR has some well thought out features such as a pivoting accelerator that moves down towards the cylinder when the cracker is removed.