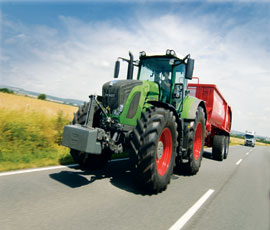 Stomp hard on the brake pedal of most modern cars, vans and trucks (make sure there is no one behind before trying this) and a rapid juddering confirms that the anti-lock braking (ABS) system is working as it should.

In essence, ABS functions by sensing the rotation speed of each wheel, registering rapid deceleration, and automatically releasing brake pressure momentarily to prevent any of the wheels locking up while the vehicle is still in motion.

The brake release/apply sequence occurs repeatedly in thousandths of a second, the objective being to keep the wheels rotating. That way, the tyres will maintain maximum traction for maximum braking effect, prevent the vehicle slewing sideways and give the driver directional control if it becomes necessary to steer around an obstacle.

It’s clever technology that took a lot of engineering work to get it to function effectively on a car wheel and tyre assembly weighing a few kilos – so consider the challenge presented by developing ABS for a full-size tractor rear wheel assembly.

It involves taming the considerable inertia and forces involved in repeatedly bringing a wheel of this mass almost to a halt but then allowing it to accelerate again in fractions of a second.


A key requirement of both systems was that they should not only work effectively with the tractor’s air-over-hydraulic dual circuit braking system on the road but also on slippery grass and the loose gravel surface of a farm track.

Essentially, the need was to develop a slower-reacting system than is used on cars and trucks to compensate for the larger wheel diameter and mass. The system has four optical sensors working with a notched ring on each axle hub to monitor rotation speed and deceleration rate and three modulators to regulate brake pressure.

One handles both front brakes – single-calliper external discs on the 2155 and 2170, twin-calliper on all other models – while the other two regulate the rear brakes individually to maintain directional stability.

All Fastracs also have a 12V supply socket for trailer ABS, which works independently of the tractor, to ensure that wiring for the 7-pin light supply circuit – which is sometimes used when there is no dedicated ABS supply – is not overloaded.

Fendt is the first manufacturer of “conventional” tractors – ie with a rigid rear axle and a transaxle rather than frame chassis – to introduce ABS. Incorporated into the air-actuated braking systems of the latest 800 Vario and 900 Vario models, it allows these tractors to run at up to 60kph, which on the 800s is achieved at a fuel-sipping engine speed of just 1750rpm.

ABS has been introduced on the 800 Vario tractors along with a new front axle suspension installation that uses two inclined hydraulic cylinders for springs. These are used actively as part of the tractor’s Fendt Stability Control (FSC) technology, which at speeds above 20kph increases the spring rate of the outer cylinder as the tractor steers into a turn to keep it virtually and so maintain better steering precision.

The ABS, meanwhile, prevents the front wheels locking by regulating the calliper pressure on the external disc brake mounted on the front drive shaft, and each of the rear wheels by controlling the internal wet multi-disc brakes.


These are contained in a new rear axle where speed reduction is arranged such that the brake discs rotate at the same speed as the wheels, which Fendt says results in outstanding deceleration values.

Stability control and ABS is also installed on the bigger 900 Vario tractors but in this case the anti-lock braking system regulates external disc brakes at the front where there are exposed drive shafts and independent wishbone suspension rather than a beam.

Anti-lock braking technology is in the final stages of development and testing for Case IH and New Holland tractors with a view to introducing it alongside revised transmission gearing that will lift the top speed from 50kph to 60kph for quicker journeys on transport duties and when moving from field to field.

To maintain the existing internal wet disc braking hardware, it uses a pneumatic/hydraulic converter to transmit force from a compressed air supply to the brake actuators but with individual hydraulic circuits for each wheel.

A dedicated electronic control unit compares data from sensors monitoring the rotation speed of each wheel, checking for excessive slip, skidding on one side of the tractor, intermittent braking and single wheel acceleration. It then makes millisecond adjustments to the air pressure, which in turn alters the pressure on the discs.


Engineers developing the system say it will provide controlled braking in all conditions, as well as reduced wear on the brake discs by regulating pressure according to need.

The system has been designed so that operators can still use independent braking for extra-tight turns on headlands. New Holland calls this feature ABS SuperSteer and uses a single “master” foot pedal with two orange-coloured extensions either side to replace the traditional latched two-pedal arrangement.

At low speed, the one-sided braking function could be used by applying the rear wheel brakes on one side or the other to slew the tractor round. Alternatively, it could be operated automatically below a set speed and beyond a given steering lock determined by the operator – and without the operator pressing a pedal.

An advantage over current individual braking systems is that the ABS would prevent the braked wheel locking, which causes surface damage. It would also reduce the tyre wear and damage that this sort of manoeuvre can cause.

The one-side braking facility would automatically be disabled above a certain speed to ensure it does not function – with dramatic consequences – when travelling on a farm track or public road.

Case IH says it would apply the ABS-60kph package to Puma CVX tractors, pointing out that the engine’s electronic control unit and continuously variable transmission will drive the tractor at 60kph with 1900rpm on the clock – or at 50kph using just 1550rpm for greater road travel fuel economy.

New Holland anticipates fitting ABS to high-horsepower tractors in its range, starting with the T7 Auto Command stepless drive models. The sharp-turn feature would give these tractors much the same manoeuvrability as if fitted with the SuperSteer tight-turning front axle but without the 40kph top speed limit of that installation.