The Farmers Weekly team have already revealed their highlights from the tractor, telehandler and cultivator lines, so here they present the best of the rest of the kit from the European machinery show. 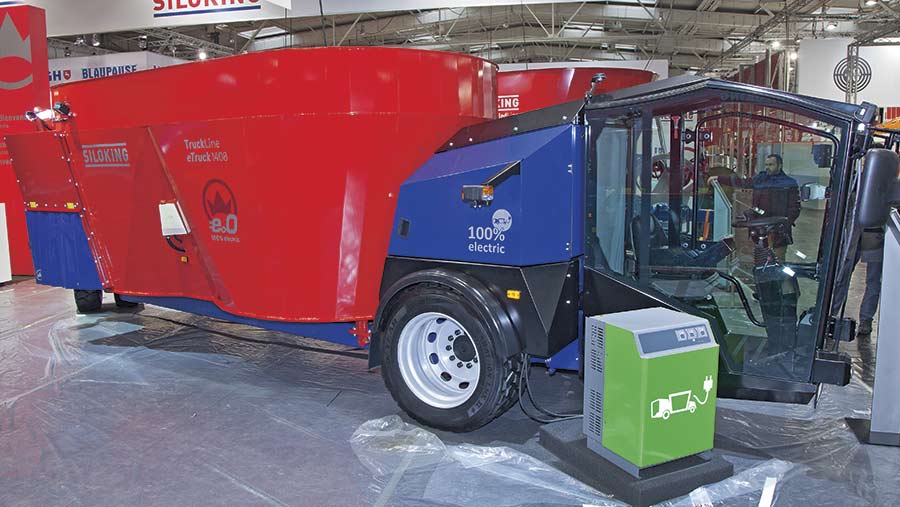 Siloking has decided to add milk-float-style electric power to its single- and twin-auger self-propelled mixer wagons in a bid to take the sting out of rising engine prices.

The eTruck is available with an 8cu m, 10cu m or 14cu m tub, with the biggest carrying 620Ah batteries that should last 1,600 cycles (about four-and-a-half years).

The company says the boring nature of everyday cattle feeding – never leaving the yard and working in short bursts – makes it the perfect playground for super-efficient electric drivelines.

Charging from flat to full takes about 11 hours and, according to the geeks at Siloking, the key to maintaining decent battery life is to make sure it’s almost empty before plugging it in.

As with all electrically powered vehicles, speed is fully variable up to 20kph and the turning radius is just 7.9m thanks to a rear single-pivot wheel arrangement.

The obvious downside is the lack of a loading arm on the front, but Siloking says its engineers are already thrashing out plans to fit one in the future. 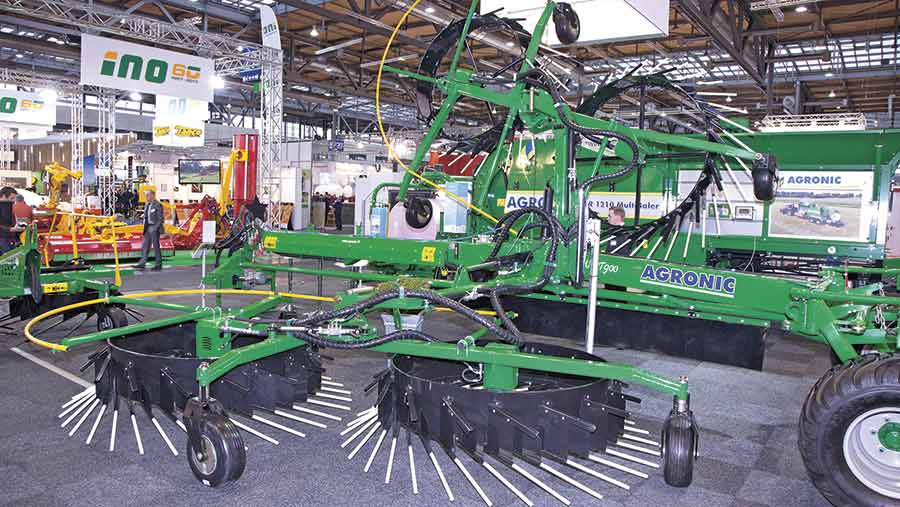 Snapped rake tines could be a thing of the past, says forage machinery maker Agronic, which was showing off its prototype plastic-toothed windrower for the first time.

The four rotors are run off two 52-litres/min hydraulic pumps, which are spun into action by a 540-speed pto drive from the tractor.

Each rotor unit carries 32 plastic tines, which the company says are able to handle working speeds up to 50% faster than a standard rake.

The semi-flexible plastic teeth are designed to better follow ground contours without scuffing up soil and also eliminate the risk of harmful metal shards making their way into the forage.

Apparently they’re pretty durable too, with the firm’s prototype machine still running with the same fingers after covering 1,500ha over the summer. 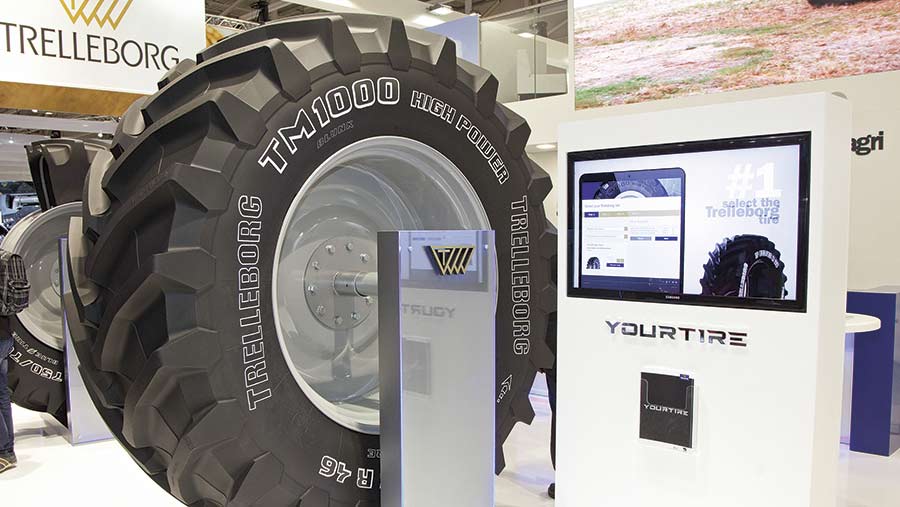 If you’ve always thought the one addition missing from your tractor was the option of personalised tyres then your prayers have been answered by tyre maker Trelleborg.

When buying a set of boots using the company’s online configurator tool, customers can add their contracting or farm name and logo to the side wall of the tyre.

The firm was showing a TM1000 High Power tyre which had the name Blunk ­– a German agricultural business – emblazoned on the side. 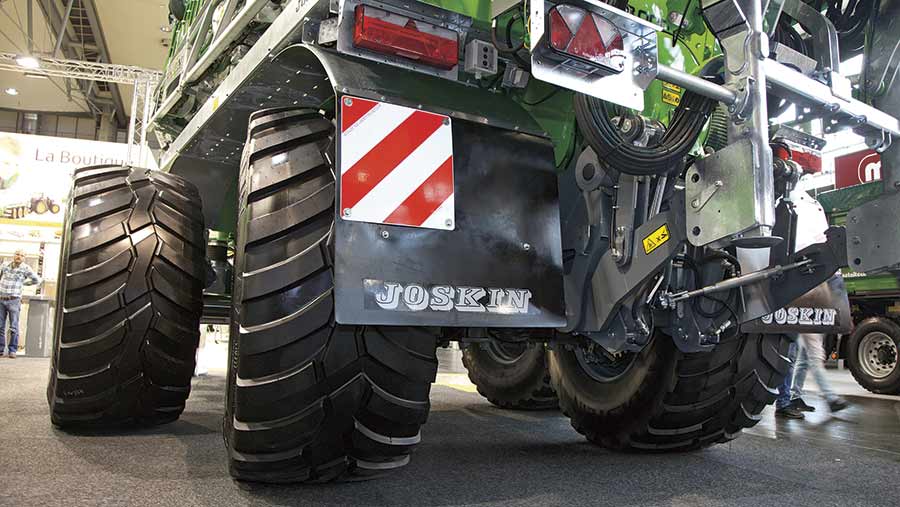 Monster floatation tyres are ideal for spreading the weight of a loaded-up slurry tanker on soggy soils but with manufacturers offering four axles and 30cu m capacity, compaction is once again top of the agenda.

Slurry kit specialist Joskin showed of its new extending axle that offers users the option to shift tyres on a non-steering axle away from the tanker by 710mm on each side.

The 13t-rated ADR axle can be hydraulically widened by the operator from the cab at slow speeds, and it’s also possible on tri-axle tankers – which have steering front and rear axles – to shift the middle wheels out either side.

The model on show at Agritechnica had some wide 800/60 rubbers to help it tread lightly, which also featured an optional central tyre inflation system. 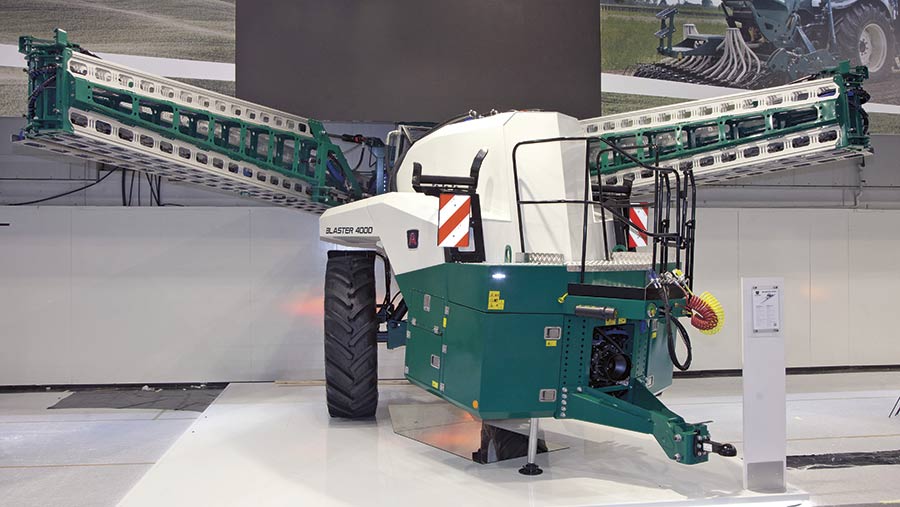 In its bid to offer a full tractor and implement range, the latest product to join the Arbos party is the aptly named Blaster trailed sprayer.

It comes available in four tank sizes from 3,000- to 6,000-litres with seven boom options – all of aluminium construction – from 21m up to an hectare-busting 42m.

Coming to the UK in 2019, the new sprayer has hydraulic rear wheel steering, although rather than turning each wheel separately the whole rear frame of the machine turns when cornering. Independent suspension on each wheel means an improved boom ride, the company claims.

The company also says with the twin-line spraying system two nozzles can squirt liquid at the same time for high application volumes while maintaining forward speeds of above 15kph. There’s no word on price just yet, though. 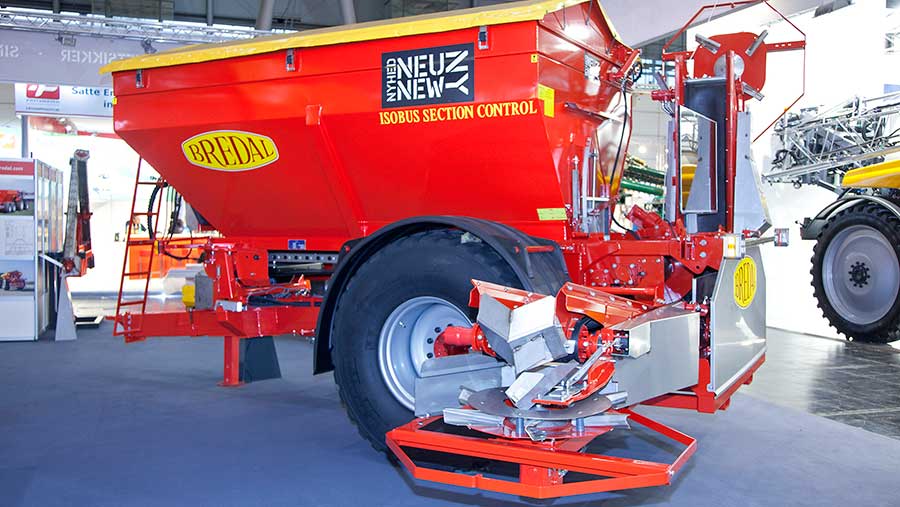 Spinning lime to a 30m width has always come with a degree of inaccuracy but spreader maker Bredal reckon its new range of spinners can do just that, while claiming to accurately throw granular fertiliser to 48m, too.

The two spinning discs offer 3,000kg/minute spreading capacity, which are attached to the end of two vertically folding conveyors. When in the field, the operator folds out either conveyor from the vertical transport position which sits the spinning discs 6m apart.

The pto-driven model on show at Agritechnica requires two double-acting spool valves and has the optional rollover hydraulic tilt.

The XE models get a hydraulic shifting option for the spreading system, which allows the operator to precisely spread over odd-shaped fields and headlands which minimises overlaps and missed areas. 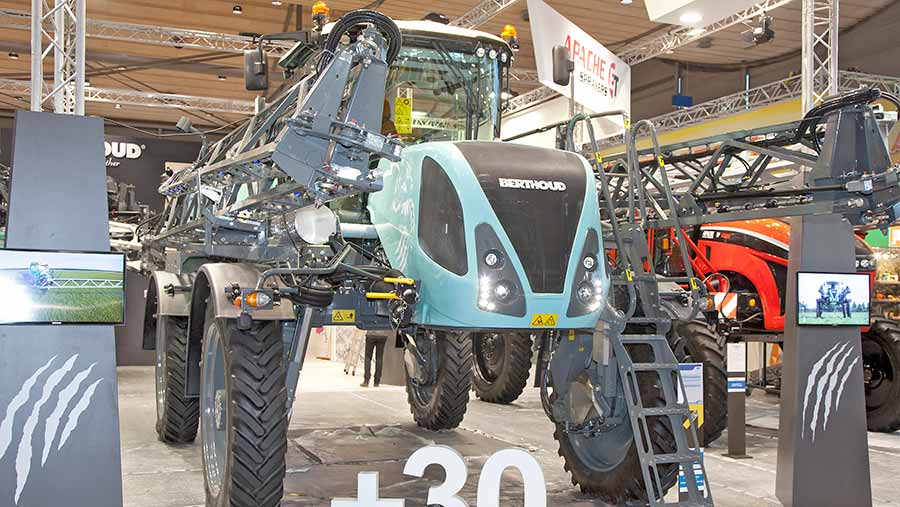 If you’re thinking of diversifying and planting a crop of sunflowers, the new Berthoud Bruin could be just ticket to protect the brightly coloured plants with a standard ground clearance of 1.5m that can be jacked up to 1.8m at full height.

Power comes from a Cummins 275hp engine running through a twin hydrostatic transmission.

The standard track width is 3m but can be shoved out to 4m at its widest, while 36m booms with Norac levelling system – as seen on the firm’s other sprayers – keeps the booms away from the soil.

Tank capacity on the model shown at Agritechnica was 4,200-litres, while in the wider cab a Trimble FMX box takes care of all the spraying and GPS settings. There is a separate control box for machine details and the most likely destination for this machine is the monster fields of central Europe, Russia and Ukraine. 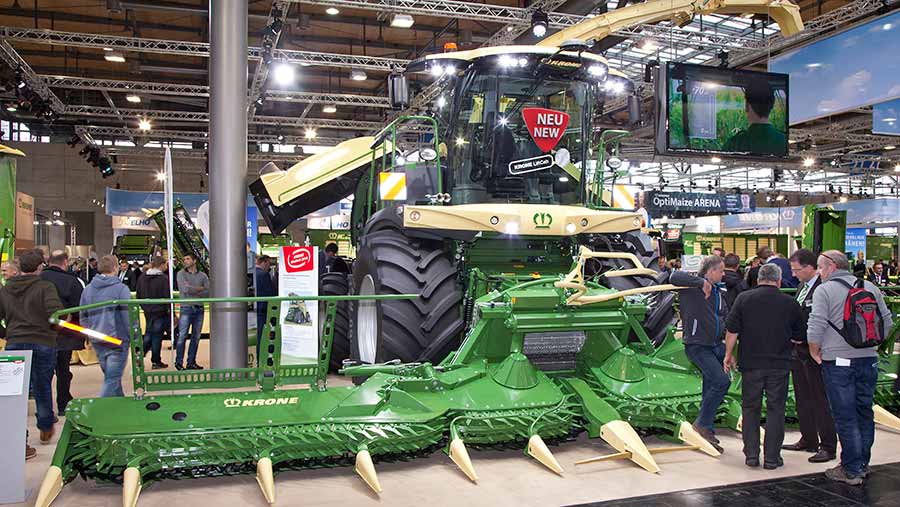 A funky-looking cab lift design from the engineers at Krone is to be offered as an option on its revamped wide body forage harvester range, which are the first models to receive the firm’s new cab.

The LiftCab allows operators to raise themselves up by 70cm in order to get a giraffe’s-eye-view over super-tall maize crops that can climb to more than 4m.

Pressing a button in the cab starts the elevating process by operating a scissor lift. While it may look like something from the Transformers movie, it will help to steer clear of immovable objects such as telegraph poles before they get too close and will also break the monotony of staring at a wall of maize all day.

The new cab features a 10in touchscreen that houses all the machine controls, while there’s more glass and smaller pillars for better visibility, too.

Along with the new lift mechanism, Krone has revamped its wide-body range of foragers which comply with Tier 4 emissions running from a Liebherr V8 lump. The turning circle has been reduced so it’s easier for operators to swing around at the end of a run, and the design and access to the corn cracker has also been improved. 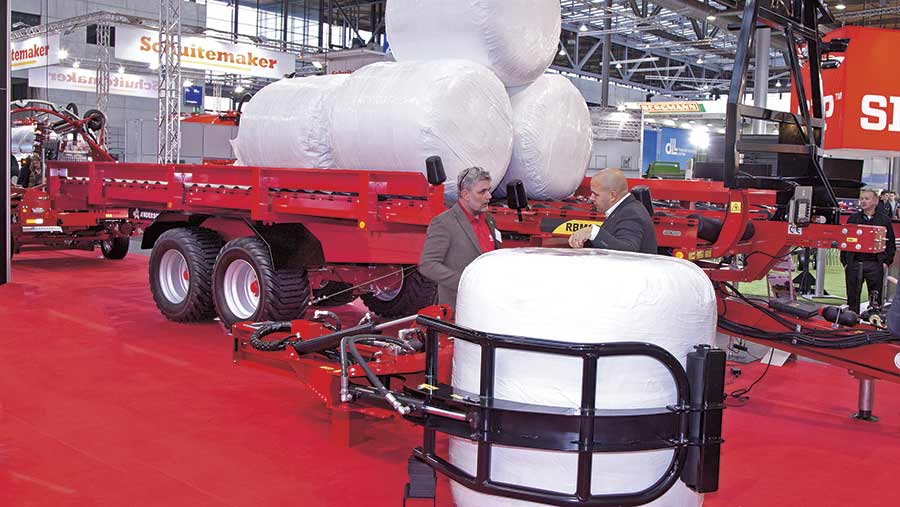 An increasingly popular silage craze is to use a trailer to collect round-bales without a loader, and the latest firm to join the party is Canadian manufacturer Anderson which launched its version to the European crowds.

The RBM2000 Pro uses a moving arm that flops out to the side of the trailer when in the field and can shift in both directions to save the tractor stopping to load a bale. The claw can also be rotated through 90deg if bales require turning before loading.

Only needing about 140hp, loading is automatically initiated once the arm has detected a bale. The lateral movement of the arm means the tractor can continue at a slow speed – in a similar fashion to a square bale chaser – to avoid the plastic being scuffed or ripped.

The Canadian-built rig is capable of lugging 20 bales at a time – two rows of seven and further row of six on top – while loading time is an impressively speedy 20 seconds per bale, Anderson says.

Controls are via a Danfoss DP 720 touchscreen in the cab and unloading is done by tilting the bed, which sees the 20-strong load pushed off the rear by the headstock to form a neat stack, two bales high.

We should see the trailers in the UK – imported by Clifford and Sons in Nottingham – by next spring and prices are likely to start at about £47,800. 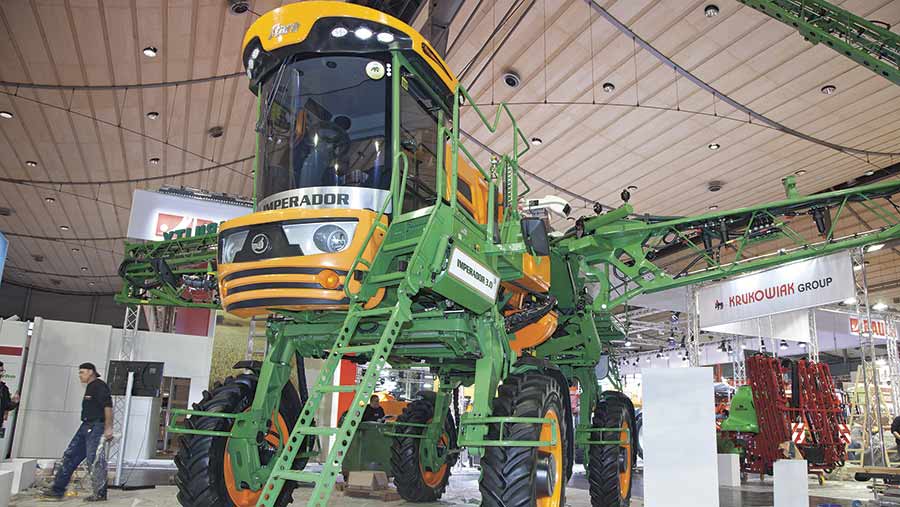 This curious-looking self-propelled machine from Brazilian maker Stara combines both a sprayer and granular fertiliser spreader.

The adapted Imperador 3.0 has a 2,400-litre sprayer tank up front supplying a mid-mounted boom and a conventional 3t granular fertiliser spreader at the rear.

Both are set to spray/spread to 30m, but crucially they aren’t able to work at the same time. That means the driver has to run through first with the granular fertiliser and then do another pass with the sprayer.

Despite that limitation, Stara says this is a popular setup in certain parts of the EU and Africa and it has already sold 250 models. 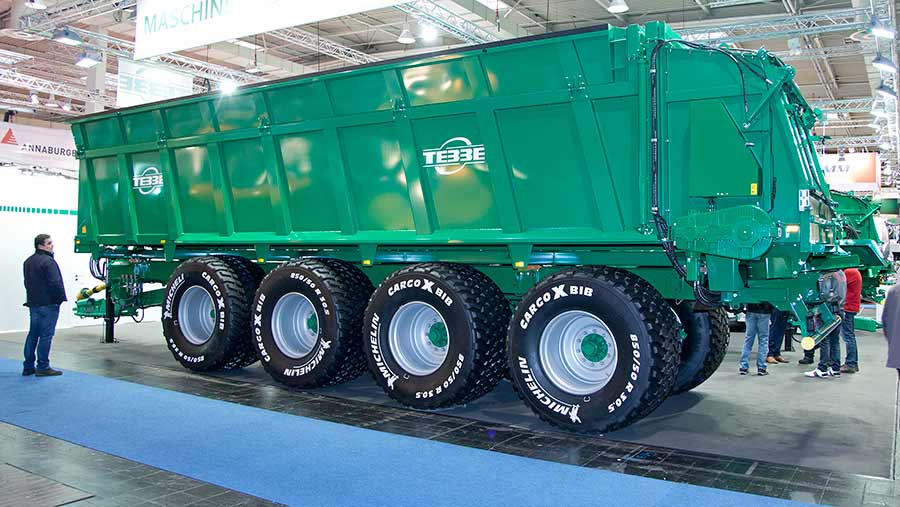 Tebbe’s colossal quad-axle spreader is one of the biggest machines you can get for applying muck and compost.

Empty, it weighs in at 17t and when the 45cu m hopper is brimmed it’ll max out at about 56t. To help spread that weight, each of the four axles is fitted with a pair of 850/50 R30.5 flotation tyres. The front and rear axles are also fitted with a forced steering system, while the middle two are fitted with passive trailed steering.

At the rear, Tebbe has opted for a twin beaters and disc arrangement for more accurate spreading.

The list price of the is €149,000 (£132,559) and since the first machine rolled off the production line last year it has sold five units. These have been gone to Canada, Russia and Eastern Europe.