The biennial Agromek show took place in a chilly Herning, Denmark and attracted visitors from all corners of the globe. The show played host to most of the big names in the machinery world who were displaying all kinds of new technology, along with some smaller companies looking to break into the market.

Different to many other large European shows, there is a dedicated section for livestock producers. These halls display everything from ear tags to feed supplements and flooring options to weighing systems, all designed to make the life of a livestock farmer that much easier.

A spin-off from Kongskilde’s development team, Agrointelli was displaying its Robotti autonomous tool alongside its new Clover Cam.

The camera can be mounted to any tractor about 1m above the crop and can differentiate between clover, grass and weeds to provide maps of each field it surveys.

This intelligence can be used to alter variable-rate fertiliser plans and apply product to areas that can use it, rather than using a blanket approach. 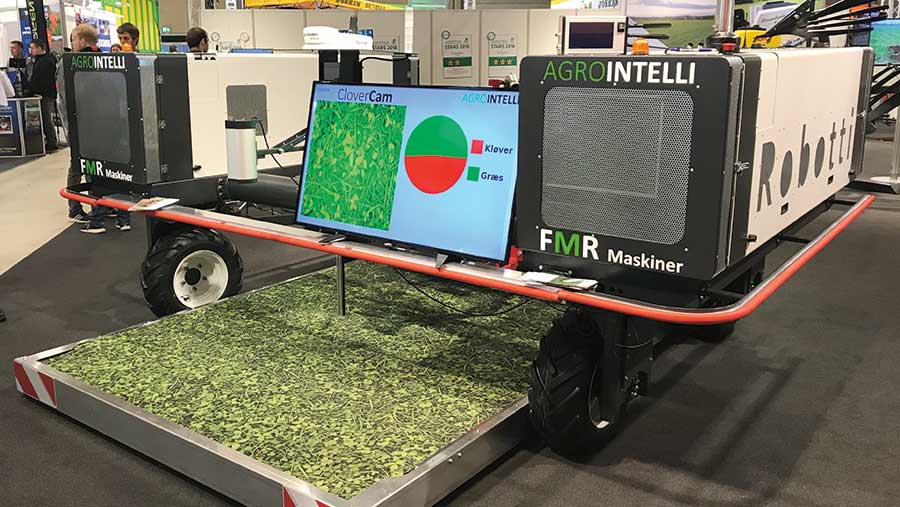 A simple control box is mounted in the cab and the mapping software is from Seges. Agrointelli says the main benefit is increased grass yields. At the moment there are 10 units working, with introduction to the UK a possibility.

The company also had its multipurpose autonomous tool carrier – Robotti – on show, in both 1.5m and 3m working widths. Crucially, it can hook on to the majority of 3m implements on the market, with no modification needed.

Capable of drilling, weeding and spraying, the Robotti runs from an RTK satellite signal from any GPS software and is classed as supervised autonomy, so once a field is mapped, the navigation planner will work out the most efficient route to carry out the job.

The user still has control over the unit via a tablet and can drive it manually for loading on trailers for transport, and the Robotti will alert the user if there are issues. Power comes from two 24hp Kubota three-cylinder engines, mounted on either wing, with electric power possible in the future.

So far, three units have been sold in Denmark, Belgium and Holland to cereal growers. Although no prices were given, we’re told it varies with width and pto requirements. 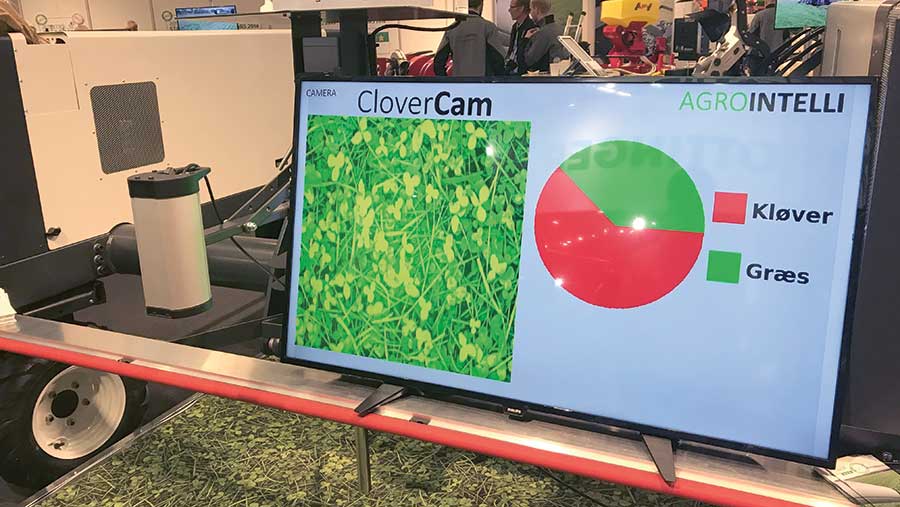 Danish firm Jydeland has been in the business of making bedding machinery since the early 1990s, selling machines under the name Bobman. Its newest addition is the Farm Cruiser.

It can carry 1,800 litres of bedding or feed, which is distributed from either side by a front conveyor. Power comes from a three-cylinder 21hp Kubota engine.

Inside the red box is a solid chain conveyor that keeps the spreading auger fed with a constant supply of separated manure, mixed straw or feed rations.

The three-wheel-drive machine is rear wheel steer and at only 1.3m wide, it can slip down the tightest of gangways, where telehandlers can’t reach.

There is also a scraper that can be extended to either side to keep things tidy and optional straw spreaders. Asking price is £32,700. 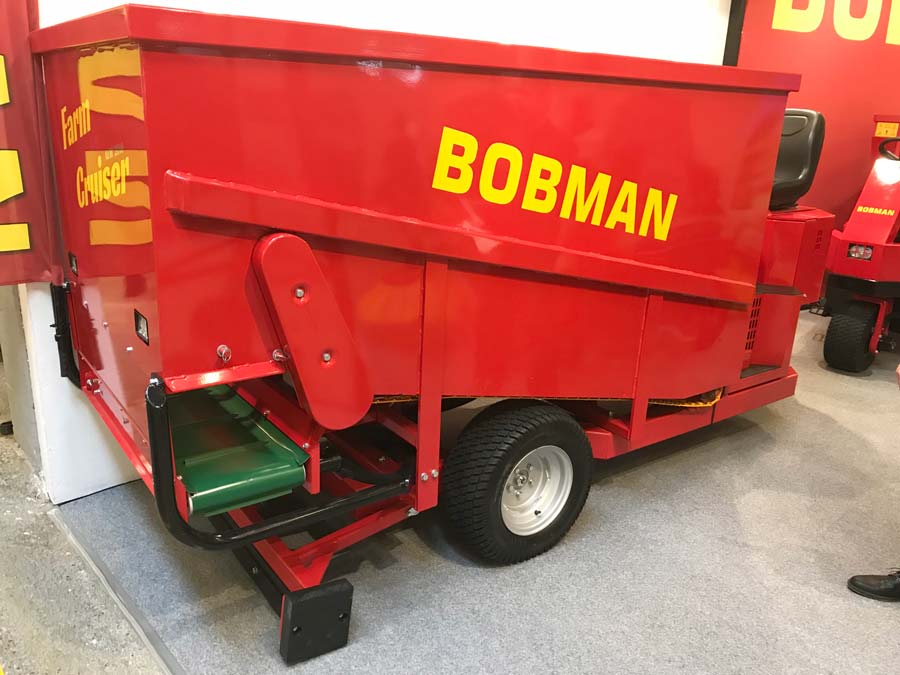 Hidden away in the corner of one of the halls was the huge, bright yellow Danfoil 10,000-litre CV AirHammer sprayer, with 27m aluminium booms on the side.

Good for about 300ha a fill, the tandem-axle unit had monster 650/65 tyres and three fully automatic washing programs, along with automatic calibration and a new boom control system for rough fields, developed by Danfoil.

Helpfully, there is a central lubrication system, as managing to reach the 60 grease points on a regular basis would fill some operators with dread. 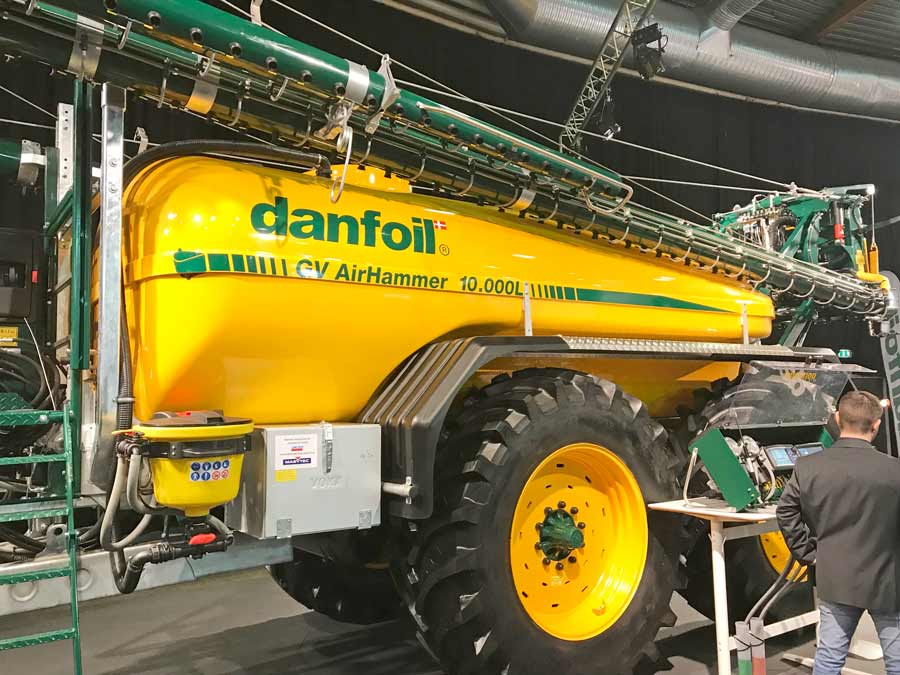 Winning one of the top prizes in the show’s awards was Staldmeaglerne for its temperature-controlled water mattress for cows.

The clever mattress consists of a 350mm latex base, with the top layer using water pockets formed in a closed duct system for cow comfort.

With water circulating underneath the animal through a number of water channels, excess heat can be drawn out to heat the water and thereby cool the animals. This heated water then travels into a heat exchanger and can be recycled and used for preheating drinking water.

We’re told it improves cows’ blood circulation, along with reducing heat stress, so an increase in milk production is possible. This claim has been backed up by Cornell University in New York, which found using the temperature-controlled mattress increased daily milk production by 3.7kg a cow. 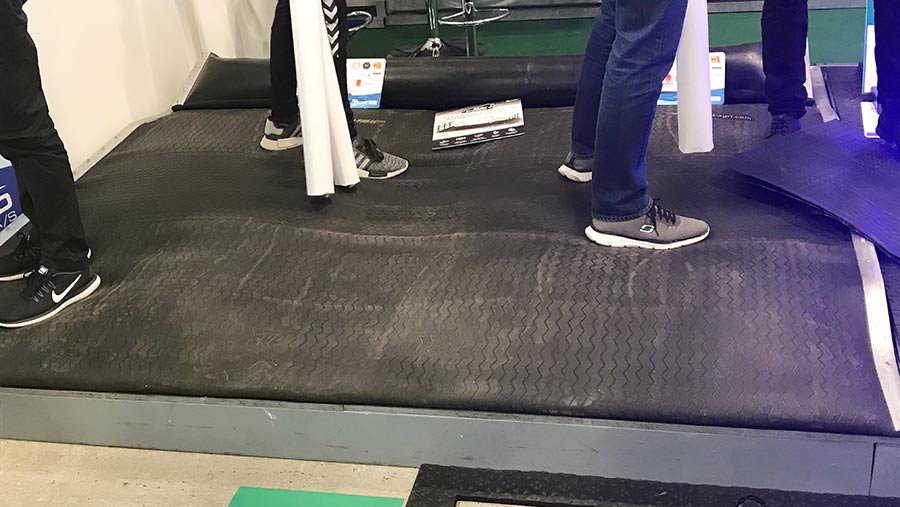 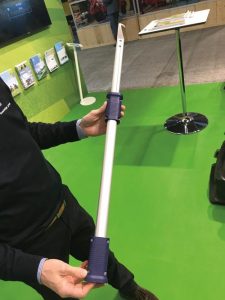 It’s a pretty dangerous job jumping under a swinging 1t sack of fertiliser or seed to slice the bag open. So fertiliser specialist Yara has developed a telescopic bag-splitting knife to keep the operator’s feet on the ground.

With a 400mm sliding extension, this should do away with the clumsy practice of using old chopper blades or a pen knife for the job.

The Yara design has interchangeable knives, so there is no need to ditch the whole unit once the knife is blunt. It retails for about £70.

Hedgecutting in Denmark is a more bullish affair than we are used to over here, and Agromek proved there are plenty of companies making tri- or quad-saw blades to fell sizable limbs in one pass. 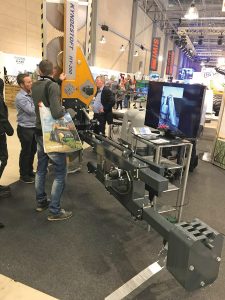 Kyndestoft Maskinfabrik was showing a new counterbalance system for its four-blade unit, which attaches to a front loader, requiring an oil flow of about 50 litres/min to spin the discs.

The cutting unit weighs 250kg and can be hydraulically extended sidewards beyond the tractor’s front wheel to avoid driving in debris. However, the risk from overturning is greatly increased, so the firm has built a counterweight that extends to the opposite side to keep the tractor sitting level.

The hedgecutter can have quick-release brackets and a choice of two, three of four discs, with the counterweight able to be deactivated on narrow lanes.

Slurry is big business in Denmark and it has been illegal to spread using a splash plate since 1996, due to the inaccuracy and nitrogen losses associated with this method.

Dribble bar specialist Samson launched its biggest boom to date at the show. The 36m monster was developed because Danish and German customers want to cover the ground quicker and stick to tramlines rather than running down crop.

Samson says UK customers have also shown an interest, with two of the 36m booms already sold over here. The firm says it has noticed a drive to be more accurate and professional from UK AD users and contractors. 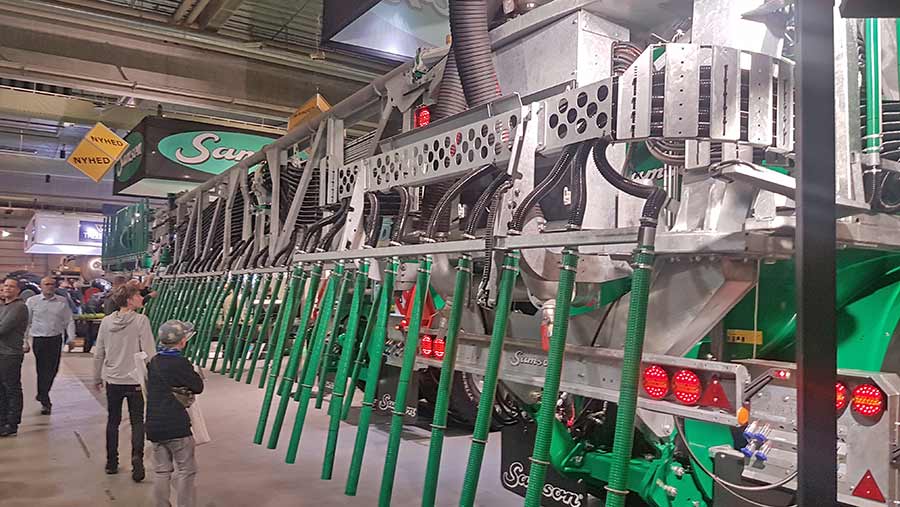 Keeping 36m level is no easy task, so the firm has built a boom levelling system on the new rig that uses one sensor each side. It offers 15deg of movement in either direction and is similar to systems used on self-propelled sprayers. 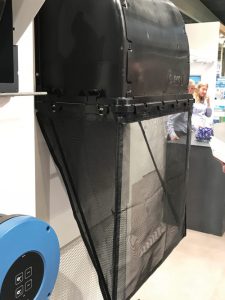 The new boom has some upgraded rams to support the extra 1t of slurry when spreading. It costs about £132,500 and needs a minimum of a 28,000-litre tanker to accommodate the folded booms, and a tug of 350hp.

To stop pigsties being awash with flies that carry harmful infections, Skov A/S has designed a simple fly cover that clips on to the outside of each air intake vent.

The DA 1200 fly screen can be removed and remounted simply for cleaning purposes and is suitable for both poultry houses and pigsties.