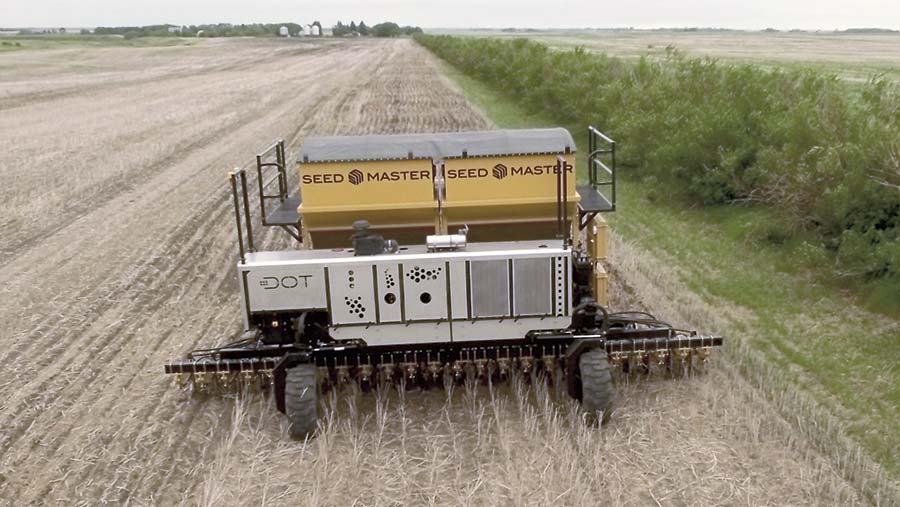 The lead in the race for a driver-free, super-efficient arable farming utopia has been taken up by SeedMaster – a little known name in the world of autonomous agriculture but with grand plans to revolutionise life in (or rather, out of) the tractor seat.

It’s called Dot and is an offshoot of the firm that made its name building mammoth drills and seed carts in the heart of the Canadian prairies.

The robotised rig was created by SeedMaster chief Norbert Beaujot, who set about the challenge of getting a driverless tractor into mainstream production back in 2014.

His design looks nothing like a normal tractor – instead it takes the form of a U-shaped tool carrier with the engine and hydraulic driveline sitting in lopsided fashion along one part of a three-sided frame.

The fourth side is formed by the implement, of which there will be about 10 to pick from initially, and dozens more once the machine is fully up and running.

Canada, like many first-world nations, is suffering from a chronic lack of skilled farming labour as potential employees ditch the tractor seat in favour of the juicier wages in oil, mining and construction.

And the challenge is all the greater as farm sizes swell, forcing operators to clock huge hours during peak seasons.

The widely trumpeted solution is to automate time-sapping jobs – a nice idea that has proved almost impossibly hard to bring to reality.

Mr Beaujot’s aim was to build a versatile tool carrier, rather than wasting an intelligent platform by restricting its responsibilities to simply drilling or grain carting.

His early plans proved enough to convince dozens of overworked Canadian growers (and several from other continents) to put down deposits long before the finished product was ready to hit the fields.

So, while the general UK farming consensus is that autonomous tractors remain a hazy mirage on the horizon, those across the pond with more acres and tighter working windows are in no doubt the time is nigh.

Dot in a nutshell

It uses a simple but clever U-shaped carriage to pick up implements sideways (in its 3.8m-wide transport mode) before swivelling 90deg on its four wheels so the engine sits at the front during field work.

The powerplant is soon to be upgraded to a 200hp Cummins Tier 5 block, which is mounted on one side of the box section frame and sends its power through a splitter gearbox to a set of four Poclain variable displacement hydraulic pumps.

Two of these provide auxiliary power to the implements (all are oil-powered, so there’s no pto) while the other two provide hydrostatic drive to the wheels.

This layout also makes it easy to run a traction control system that directs the oil to whichever wheel has the best grip based on the disparity between the GPS and wheel speeds.

A heavier-duty walking beam axle on the side opposite the engine helps keep all four wheels biting into terra firma and acts as a counterweight to the driveline.

Dot’s choice of diesel power differs from most prototype driverless tractors, which tend to run off batteries.

However, electricity adds complexity – both in manufacturing and for the end user – and is probably why most experiments have failed to get anywhere close to full-scale production.

Big batteries remain prohibitively expensive, don’t have the capacity to deliver the huge power outputs required and are a nightmare to charge in hard-to-reach places with poor access to the grid.

Below is a video showing how it works on the farm:

The robot-grade software that allows Dot to run without a driver was developed by SeedMaster’s seven developers and supported through a collaboration with guidance specialist Raven.

Manual steering with a remote-control joystick is only really needed for farmyard manoeuvres and picking up/dropping off implements, although even this can be automated once their GPS co-ordinates have been noted.

It uses existing field maps to create uncrossable virtual boundaries for the machine and its implement.

The company’s own software makes sense of the information provided by the map, including hazards such as rogue troughs and power poles.

From that, it picks out the most efficient route across a field, which must then be approved by the farmer before it is sent to the on-board processor.

Dot strictly follows this route and will stop dead if it’s forced to deviate, before sending an alert and waiting for operator input. Owners can also keep tabs on its progress through on-board cameras, or even take the reins via long-range wifi.

Most of the basic decision-making during work is computerised, so it can do things such as reduce forward speed to climb a steep hill.

It also collects data as it works, which can be used to form variable rate application and horsepower maps as well as monitoring fuel usage and repair/maintenance indicators. In time, more sensors will allow it to process information relating to soil conditions, crop health or weed detection.

To keep purchasing decisions simple, one Dot unit is designed to be able to cover the same land area as a single combine – about 1,000ha. 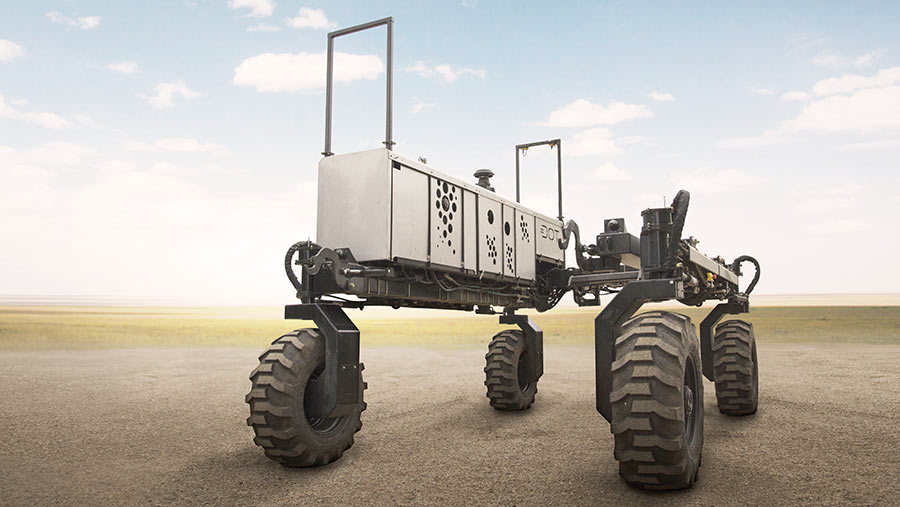 Machines still require a degree of operator input – sprayer tanks and drill hoppers need filling, as does the fuel tank every 10-14 hours – but it’s designed to be far less taxing than an 18-hour stint in the seat.

Nor is there any getting away from the fact that shear-bolts break and nozzles block, but there are plenty of companies developing cameras and sensors capable of detecting problems and alerting operators, who can then march out to the field with tools in hand.

The cost of the kit is tumbling too, so there’s likely to be rapid progress in this department.

Carrying implements on top of the power platform also helps cut compaction by making use of their weight to benefit traction.

Typically, tractors must outweigh the drill or cultivator to help put their power to the ground, but Dot can make do with a fairly modest empty weight of less than 6t, which apparently reduces the quantity fuel and power required purely for propulsion.

As ever, health and safety represents the biggest challenge in any type of automation.

The first objective is to get the machines working in the Canadian provinces of Alberta and Saskatchewan, where the authorities are keen to embrace any technology that cuts the number of accidents caused by overtired operators.

However, the company is bound to be engaged in a few arm wrestles with law makers in other countries, so its designers can ill afford to have a buccaneering approach to machine safety.

Default protection modes that bring it to a standstill outside of its working boundaries are standard and more safety kit will be added in due course, including radar/lidar sensors.

Developments in the autonomy of cars – particularly self-steering and automatic braking – are making the technology cheaper than ever before, but someone, somewhere will still have to be responsible.

Early models aren’t set-up to drive on the roads and will  need carting to sites on a trailer – but the plan is to be able to send units between fields in the future.

By that time, driverless cars are expected to be well established.

One of the perks of Dot is that it can be used for all sorts of tasks, including grain carting, cultivating, drilling and spraying.

All of the implements are mounted without wheels or hitches – instead it uses four ram-powered hooks to hoist the implement on to cone-like guides, in turn forming the fourth side of the rectangular frame.

Designing the power unit first – with a single, clear horsepower rating and hydraulic capacity – means the implements can be built to suit its capacity.

The company has assembled a range of items through sister firm SeedMaster, most of which have been adapted from standard, hydraulically driven tools.

The 9m drill, for instance, is simply one third of the firm’s mainstream product and is able to offer variable rate and auto shut-off.

Short-line manufacturers have also been invited to build their own Dot-ready implements and it has prompted a flurry of interest from companies such as Pattison Liquid Systems, which is developing a 36m sprayer.

Although the development process is expensive, potential suppliers see Dot as a fast-tracked opportunity to get into the robotics business without relying on the world’s biggest ag machinery makers, and the standardised platform should bring their production costs down in the long-term.

Other potential sectors for automation include the repetitive tasks of feeding and cleaning duties on dairy farms – a market where the likes of Lely have already had plenty of success with smaller robotic units.

There have also been whacky-sounding whispers about making a combine. Dot’s carrying capacity is enough to cope with the body of a reasonably sized combine, which could be paired with a second engine to cope with the demand of both threshing and motive power.

When will it be available?

As many as six units should be up and running for this season, with another 20 scheduled for production next year and many more in the pre-order book.

The company is initially focusing on western Canada, but it hopes to have a Europe-friendly model with a 3m transport width ready within three years.

That timeline puts it well ahead of most other autonomous tractors being developed by universities and researchers, which are predominantly small, electrically powered and miles from reaching mainstream production and large-scale operation.

Surprisingly, the farm machinery market’s biggest hitters have so far failed to get any sort of chokehold on the gold rush of autonomous ag.

The likes of CNH, Fendt and Kubota have dabbled with driverless technology – and several others have demoed master-and-slave-style systems – but, so far, their efforts seem to be more of a bombastic marketing exercise than anything close to manufacturing.

Redesigning seeders to work with Dot

SeedMaster had to redesign its drills to make them easily adapted to run on Dot.

Traditionally, the company has used a fairly standard layout of three staggered rows of coulters to maintain decent trash flow when working on min- or zero-tilled land.

To reduce the space required for the implement, the company now uses spoked, ground-driven wheels between each coulter to walk trash through the seeder.

The 8in spokes poke a small hole in the soil as they bite in and avoid throwing soil into the other rows.

This means that each coulter’s packer wheel properly gauges the working depth, running level with its neighbour to complete all of the soil movement before any of the packers pass over the drilled seed.

The design also makes servicing much easier, as each coulter can be accessed from the rear rather than having to scrabble around underneath the drill.