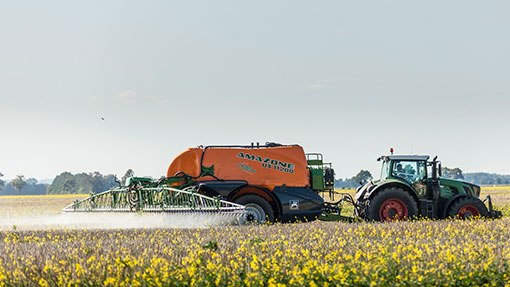 German maker Amazone says it has set the world record for crop spraying at Golzow near Brandenburg, Germany.

Of course, it’s all about big tanks and powerful tractors. The UX 11200 holds a swimming-pool sized 12,000 litres of liquid, and spreads its not inconsiderable weight over a tandem axle with some pretty huge tyres.

The boom fitted was 40m and the whole thing was pulled by a Fendt 933 330hp tractor. Speeds during the day averaged 13-15kph, but as night fell, the lower wind speed and heavy dew allowed speeds to improve to 17kph.

The sprayer was filled in the field from a 21,000-litre water bowser from giant kit maker Annaburger, along with a 1,000-litre bulk container of glyphosate fitted to the back of a Unimog. Application rate was 100 litres/ha of liquid.

The sprayer had to be filled up just 10 times and the total amount of liquid used was 103,000 litres.

It was not all done on one huge flat-as-a-pancake field either, stresses the company. A total of 15 fields were sprayed and many of them were apparently very uneven, making the boom guidance system work hard to keep the whole thing level. Pylons and irrigation points also made the work quite demanding.

However, all these obstacles and no-go areas were stored into the tractor’s terminal to warn the non-local drivers of their presence in good time. GPS steering with ultra-precise +/-2cm RTK autosteer also no doubt helped, as did GPS auto-shutoff.

The effect of field sizes on workrates was very striking, says the company. Field sizes varied from 40-124ha (giving tramline lengths of 0.5-1km). On the smaller fields, drivers managed 38ha/hour, while on the bigger ones they achieved 45ha/hour. Fill-ups varied from 10min55sec to 13min45sec.

The organisers worked out that moving the sprayer from field to field lost one-and-a-half hours. Meanwhile, driving around pylons and irrigation points, plus turning on the 40m-wide headland lost another three-and-a-half hours.