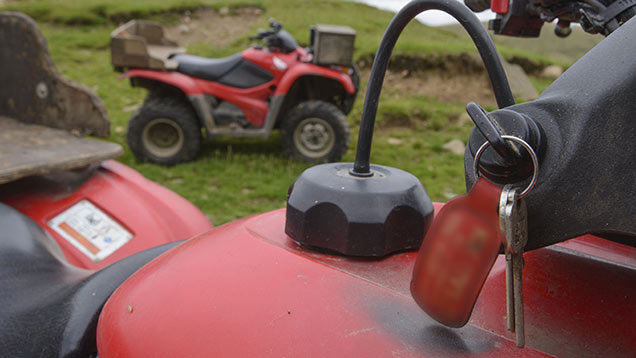 Tools, fuel and quad bikes remain top of thieves’ hit list when they target farms, according to latest figures.

NFU Mutual has released its annual crime data, based on claims received in 2014, which shows the top 10 items stolen in rural areas.

According to the survey, the most commonly targeted items over the past 12 months were fuel, tools and quad bikes, which is the same as in 2013.

In 2014, the company processed claims for 820 quad bikes, which equates to more than 15 being stolen every single week of the year.

However, thefts of tractors and other vehicles have fallen significantly in the past 12 months. This is thought to be due to the fact that farmers and manufacturers have taken steps to make them harder to steal.

The worst-affected counties for rural crime in 2014 were Essex and Kent, with Lincolnshire, Hampshire and Cambridgeshire following close behind.

These are the counties where the value of claims submitted was the highest.

Yet despite an overall decline in the total cost, the survey found that many in rural communities feel thieves are also becoming more sophisticated.

According to 63% of those surveyed, cyber-crime is a growing problem for rural communities, while NFU Mutual’s most recent claims data also shows thieves are taking advantage of new targets such as solar panels.

Matthew Scott, chief claims manager at NFU Mutual, said the decline in the cost of rural crime was welcome news and reflected the huge efforts being made by communities and others to tackle the problem.

Initiatives such as the Lancashire Livestock Scheme and CESAR tracking for agricultural vehicles were having a real impact and making life increasingly difficult for rural criminals.

But he added: “That said, problem areas remain. Levels of livestock theft, for example, are stubbornly high and quad bikes continue to be targeted by criminals. Several regions of the country are recording significant increases in the cost of quad bike theft.

“So, while today’s survey contains some good news, it also highlights the need for rural communities to remain vigilant and put security at the forefront of their minds.”