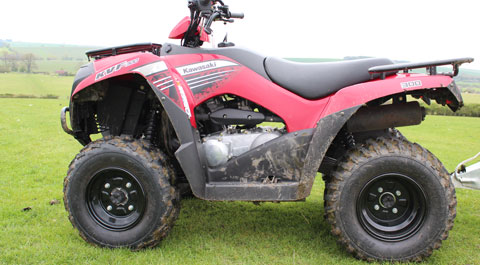 Although powered by a 300cc engine, the KVF has many of the features that a larger ATV has as standard. It’s man enough to tow as much weight as is necessary on a standard sheep farm, and for non-extreme terrain, the lack of 4wd doesn’t seem to have a bearing on this being a good value entry-level bike for those entering the market or replacing an old workhorse.

Thirty-something years ago, the first quad bikes burst onto the scene. With 300cc engines and in some cases three wheels, they somewhat revolutionised livestock farming in the UK. It meant an alternative to the Land Rover; and on the hills, it meant even aging shepherds could get around.

Through the years, like everything, quads got bigger and bigger. Now, the average quad bike sold is in the 450 – 500cc range, and it’s not uncommon for manufacturers to offer bikes that boast 1000cc blocks that are capable of upwards of 70mph.

So, is bigger always better? Japanese manufacturers Yamaha and Kawasaki have both revamped their smaller 300cc models, aiming them at entry-level customers. We tested two to see what they had to offer.

The version tested came in cherryade colour (why Kawasaki didn’t call it that instead of “Aztec Red” it remains to be seen). Plastic guards are good quality and sturdy enough to bash the odd obstacle. To the front, there’s a big, workmanlike grille that’s sturdier than the Yamaha and gives the Kawasaki more of an imposing look, making it look like one of its bigger, more powerful brothers. Bodywork is integrated, however this means if you have to replace something you tend to have to replace the whole panel.

A comfortable and large seat gives you a stable operating position and it’s light enough on the steering (despite not being electrically powered like larger bikes). Suspension is firm enough without adjustment to be able to ride over ridge and furrow without coming a cropper.

Load racks are sturdily built however, according to the literature, it can’t hold as much as the Yamaha. That didn’t mean we couldn’t load it up with bags of sheep food though, so it’s fair to say you can get more on than advertised.

Both front and rear get twin disc brakes, the rear being ventilated. The parking brake can be left on if careless (see our section on the Yamaha), although is easy to operate.

Unlike the Yamaha, the Kawasaki gets a sophisticated digital dash that shows fuel level, speed, odometer and temperature. It also tells you what transmission option you’ve selected.

One downside is the lack of a horn on the model we tested. On a stock farm it’s very useful to have a horn, especially if your sheepdog is very old and deaf. The lack of one made for a lot of shouting and exasperation.

The Kawasaki has a really useful front compartment that’s fitted with a gasket to keep water out. It’s big enough to take a couple of spray cans, a pair of ringers or foot trimmers. There’s also another smaller compartment inside that could be used for carrying smaller items like tags and needles for out in the field.