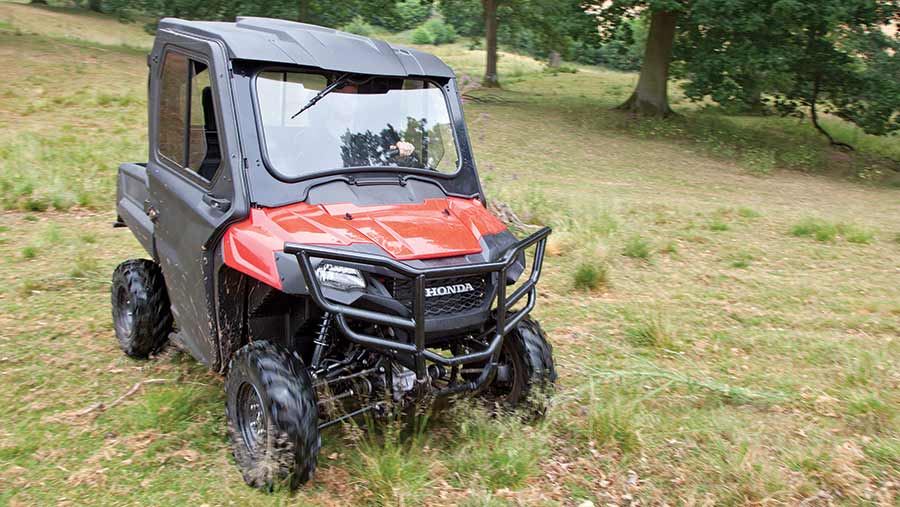 The Honda Pioneer SXS was the cheapest buggy we tested, see how it fared on performance and comfort.

It was clear to see why this was the cheapest buggy on test – the lack of a low-range box and power steering, along with some non-existent engine braking, were huge negatives compared with its rivals.

The cab was exceptionally noisy too, but we did like its nimble size, simple mechanical controls and pokey petrol engine. In reality, it seems better suited to leisure than work.

Best for: Compact and nimble

The Pioneer had a surprising turn of pace from its 675cc Honda engine, which put the Gator and the Mule to shame and managed to climb our test hill unladen in less than 10secs – not far off the far more powerful Polaris.

However, engine noise in the cab comes as a bit of a shock. It’s so loud that drivers should probably kit up with ear defenders, though if you ordered one without a cab – which simply works to amplify the racket from the engine – then things would undoubtedly improve a bit.

The Pioneer differs from the rest in the transmission department by opting for a three-speed automatic.

Under load, the switch between the ranges is very noticeable, so the drive is far less smooth than most other buggies on the market.

But the biggest stumbling block is the lack of a low-range box, particularly given that UTVs spend most of their time off-road and in fairly gnarly conditions.

The fact that it’s very light works in its favour, but doesn’t make up for the shortage of gearbox ranges.

On the road, the Pioneer was quick, but there is no getting away from the engine noise.

The aftermarket cab – adding just under £3,500 to the price – is a strange add-on that looks a few sizes too big for the body.

It also limits ventilation as there is no opening front window and only horizontally sliding openers on the side that slam shut under hard braking. Monster pillars completely wreck views outwards, too.

However, without the cab it’s an entirely different proposition. The seats are pretty comfortable, the dash is uncluttered and the controls are mechanical and unbeatably simple – particularly when sat alongside the car-like Polaris.

The flat floor and bench seat also offer maximum flexibility, though shoulder room with three people on board is limited.

If it’s likely to do a lot of transport duties then Honda offers a four-seat option, too. It’s ideal for ferrying guns around on shoot days and is an extra not available on all of the others, but does eat into the rear load bed space.

Despite the perks, the Pioneer falls a fair way short of the standards we’d typically expect from Honda’s off-road range. 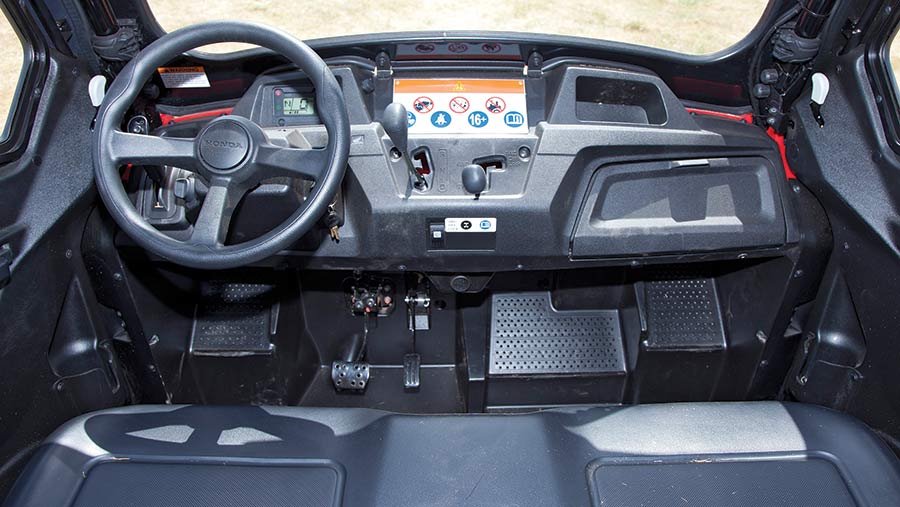 There are plenty of handy credentials for work life – notably its compact size and surprising balance – but, unfortunately, the turning circle isn’t one of them.

The load bed is small, and the tailgate comes with naff latches and doesn’t lie flat, which means it sits 940mm from the ground and makes loading it with feed bags a bit more of a chore.

However, suspension travel is reasonable across each corner and the Honda did an OK job of soaking up rutted tracks. Of course, having a bench seat means the occupants tend to get thrown about a bit.

Towing is also a problem, largely because of the single range transmission. Though it has the power, the lack of a low range means that the gearing is too high for serious towing work on hilly ground and non-existent engine braking doesn’t help on the downhill sections either.

The payload is also a good bit lower than the others, which reflects harms its suitability as a genuine working tool. 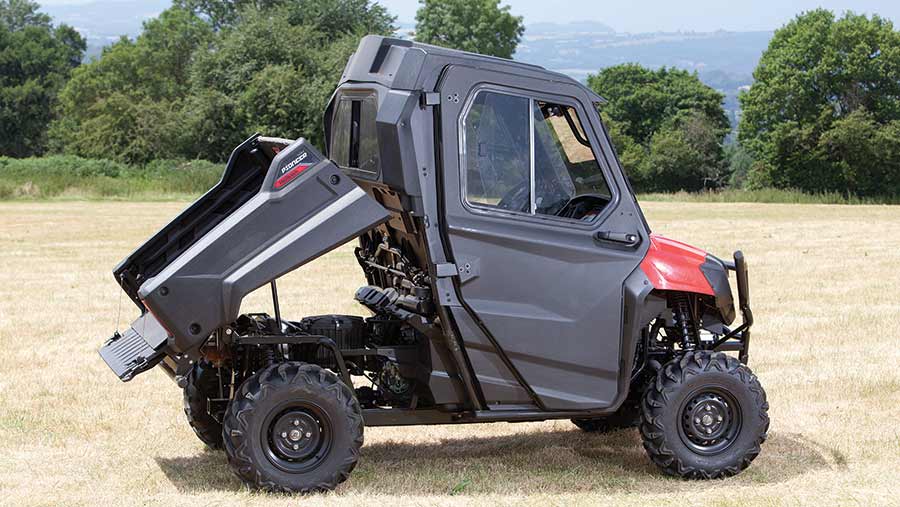