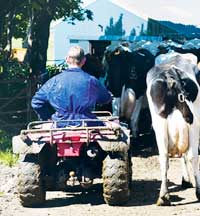 Two thirds of Scottish farms targeted in a Health and Safety Executive campaign were not using all terrain vehicles safely, figures have revealed.

The figures were released by the HSE at the Royal Highland Show, following visits to 58 farms over a two-week period earlier in June.

Improvement notices were issued to 36 of the farms – 25 for using ATVs without appropriate training, 10 for a lack of suitable head protection and one for poor maintenance.

On average, two people die and over 1000 are injured in ATV accidents each year, the HSE said.

Three agricultural workers died in incidents involving ATVs in Scotland in the four years up to 2008/09.

Visiting HSE’s stand at the show secretary of state for Scotland Michael Moore said: “These results should act as a sharp shock for the agricultural industry. Agriculture remains one of the most dangerous ways to make a living in Britain and farmers must do more to protect themselves and their workers.

“Many incidents involving ATVs, like so many other farming-related incidents that can result in death or injury, are easily preventable if simple measures are taken,” he said.

NFU Scotland policy director Scott Walker added that there were simple ways of cutting down injuries.

“Anyone who uses a quad bike must remember – wear a helmet.”

“It is also vitally important to ensure that bikes are maintained and serviced so that they are fit for the work they do around the farm.

“While existing employees may be well skilled in their use, refresher courses never go amiss and it is essential that any new employee is suitably trained before being let loose on the road.”

• For full coverage of the Royal Highland Show click here