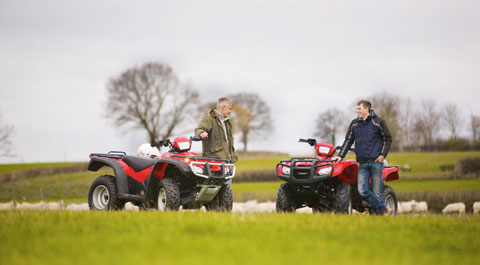 Honda’s Foreman has had a revamp. David Cousins and Oliver Mark put the old and new models side by side to see what’s changed

Improving something that works perfectly well and is very popular is never easy. Honda’s workhorse Foreman TRX500 ATV is a good example – it does most things pretty competently and has almost become standard issue across the arable side of the country.

But it’s now been five years since Honda last updated the Foreman, so the company reckoned it was time for a revamp. The new model is the fifth generation of Foreman and claims – among other things – to have more pulling power and better downhill braking.

Suffolk Honda dealer Fieldens lent us both new and old models and Chelsworth farmer Michael Mumford provided a range of terrain for us to compare and contrast the two machines.

Both ATVs had the standard manual gearbox, which Fieldens says accounts for 85% of Foreman sales to its farmer customers.

Honda has certainly rung the changes up front. The 475cc single-cylinder petrol engine is now water- rather than air-cooled, which the company says will mean less reliance on airflow through the machine to keep it running cool.

The other change in the engine department is a shift to using fuel injection rather than a carburettor.

So there’s no choke to pull and the Foreman should be quicker to get going on cold winter mornings. The compression ratio is higher, too, and provides a bit more bite, something we noticed when towing.

As before, the Foreman sports shock absorbers at front and rear. However Honda has fitted a single shock absorber at the back rather than the two it used to have.

On paper that sounds like a retrograde step. However, while the old model offered no scope to alter the softness and hardness of its four shocks, the new set-up has four adjustable settings on all three shock absorbers.

On the version we tried all three were on their softest setting.

It ensured that the bike floated over bumps almost as if they weren’t there. However, it did sometimes mean there was some untamed stallion-type bucking and rearing at the front end at high speed with a heavy load behind.

A harder setting might have helped, but we didn’t have the tool to alter the settings. 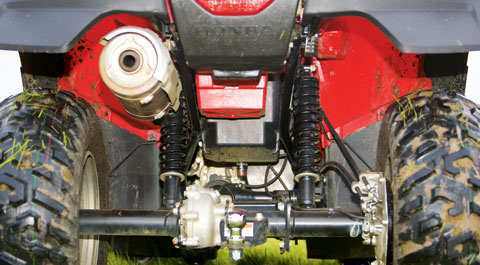 At first glance, distinguishing the new model from the old is a bit like one of those spot-the-difference games. Both machines have the usual bulky protective plastics, but the new model does look meaner, thanks to the aggressive-looking front mudguards and a plastic shell that covers almost the entire engine.

You sit higher on the new model, too, with a more relaxed easy-rider style stance instead of the crouch-over-the-handlebars riding position on the old model.

Unusually, Honda has ditched the electric button that shifts between 2wd and 4wd and returned to an old-school lever on the left hand side of the handlebars. It says it’s a more robust way to do the job that avoids losing 4wd if there’s a battery or circuit problem.

We were sorry, though, to see that the replaceable mudguard extensions had gone. They meant that even if you had scuffed and bashed the edges over the years, you could fit new extensions to smarten up the bike when it was time to trade it in.

With the new model, doing that means replacing a whole new front or rear section.

For some reason Honda has also ditched the rather nice silver steel front bars in favour of humdrum black plastics. Oh, and the clock on the dashboard has gone – not sure why… 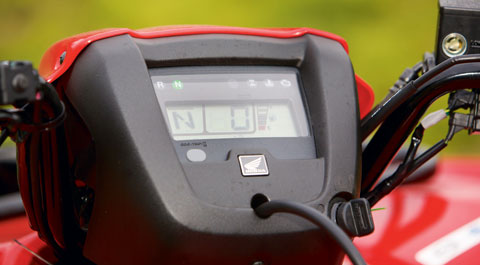 The biggest change here is engine braking – the new model simply has loads more of it. Riding the two bikes side by side down a steep hill graphically showed the difference between old and new.

The new model was as controlled and disciplined as a brigadier-general on the parade ground, while the old model hurtled down the hill like an out-of-control fell runner nearing the finish line. 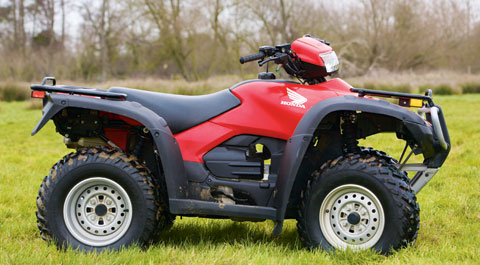 Old model has been on the market for five years.

The second area where differences are very apparent is in low-speed pulling power. We dropped a big square bale into a trailer to give a total weight of 370kg (just 15kg short of the Foreman’s book capacity) and repeatedly hauled it up a pretty long, steep hill with each bike.

The difference between the two was easy to spot. The new model simply powered straight up the hill while the oldie quickly ran out of puff.

Top speed remains at 45mph, and the new engine is as perky and eager to please as the old one. Honda says the new injection system should cut fuel consumption, but we weren’t able to either confirm or disprove that claim at this early stage.

Engine noise is notably different on the two models. When the new bike is idling there’s little more than a whisper, but stab the throttle and it barks like a Jack Russell. On the old model engine noise is softer and more rounded, like a labrador asking for its tea. We preferred it, though it’s hardly a deal-breaker.

Front and rear carrying racks look much the same on the new model as on the old one.

However, a rung or two has been removed which seems odd. Carrying capacity is unchanged at 60kg.

Rear carrying rack capacity is increasingly coming under the spotlight as farmers fit ever-larger slug pelleters on the back of their ATVs.

Fieldens says that it’s easy to find that the pelleter plus a couple of spare bags is well over the machine’s carrying capacity, with the result on bumpy ground that rear racks can suffer from metal fatigue.

In fact it now offers a frame-strengthening kit for £500, which should help keep things under control.

Available now, the standard Foreman is on the market with the same £6,515 price-tag as the previous model. There’s also an FE electric transmission version for £300 more.

The TRX500’s workhorse credentials are certainly maintained with the new model. Downhill engine braking and low-down power, in particular, have been markedly improved. But it’s a shame that some smaller features have been lost in the revamp.