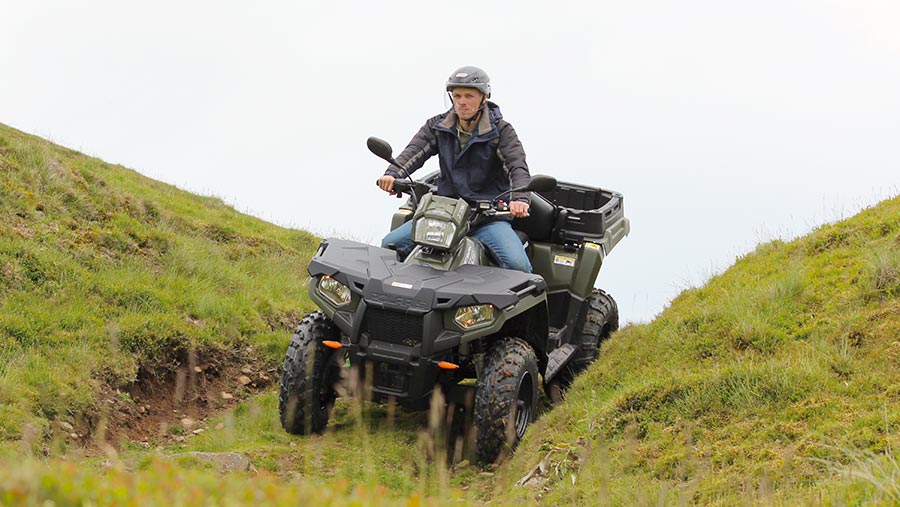 Millions of pounds’ worth of ATVs and farm buggies have been recovered thanks to retrofit tracking systems.

The covert kits are fitted discreetly in the machine’s shell and ping regular location updates to a mapping system that can be accessed online or via a smartphone app.

There are several manufacturers in the UK, including ATVtrac, which builds its hardware in Reading.

ATVtrac’s system is installed by registered dealers, of which there are roughly 200 across the UK. If farmers choose to do the fitting themselves, any subsequent insurance claims will be deemed invalid.

The process takes about an hour and involves tapping into the machine’s battery and hiding the box of tricks in a sly location. We won’t go into too many details here, as the aim is to make it as hard as possible for our light-fingered friends to discover and disable.

Once registered, the ATV’s real-time location is immediately visible through an online portal or on the Bike Trac app, both of which use a Google-sourced map.

It uses a multichannel tracking system, keeping tabs on the machine’s radio frequency and sending location updates via GPS, GPRS and GSM.

The upshot of this setup is that it should be able to ping its position, even when stashed in a shipping container, van or building.

There are two security modes that alter the way the alarm is triggered. The first is “movement” mode, in which the virtual alarm will be activated if the ATV is moved with the ignition off.

This sends alerts to any number of specified phone numbers and, if the theft is confirmed by the owner, ATVtrac’s call centre will speak directly with the police to track it down. 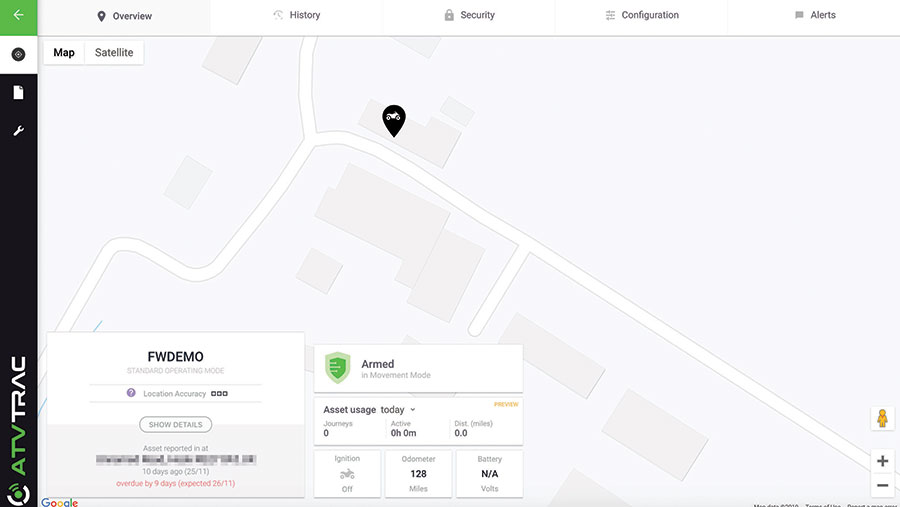 The second is “geofence” – this sets off the alarm if the ATV moves outside of a 130m boundary.

Unfortunately, it’s not yet sophisticated enough to allow users to set specific geographic boundaries, such as along the perimeter of a ring-fenced farm, but we’re told it’s in the pipeline.

To save getting texts, calls and email alerts from the 24-hour call centre when moving the machine to another farm or field on the back of a pickup, there’s also the option of engaging “servicing” mode.

This temporarily disarms the tracker alarm and can be set to last anything from 30mins to 30 days.

What else can it do?

The tracker can double up as a relatively basic telematics system. As well as allowing the owner to view the odometer, recorded speed and journey history online, it’s also possible to automate servicing by sending the dealer an alert.

This is obviously useful from a dealer’s point of view, so several are fitting it as standard, including John Deere seller Tallis Amos on all new Gators.

Other useful features include a battery voltage monitor. This can be used to alert owners by text when the ATV’s battery drops below a set threshold – 11.2V in our case.

The unit also has its own internal battery – storing enough juice for 30 days – which it reverts to when the main power source drains past its preset limit.

The system is fitted with tilt sensors that can be used to send alerts to specified phone numbers, should the bike be overturned for more than 45secs. This may well prove useful for rural businesses where lone working is common.

That might sound expensive, but NFU Mutual offers 12.5% off insurance for any products fitted with a Thatcham-approved tracker.

In fact, ATVtrac says one of its customers has fitted his whole machinery fleet – tractors, telehandler, pickup and ATVs – with £2,000’s worth of trackers. but has knocked a whole £3,500 off his insurance bill.