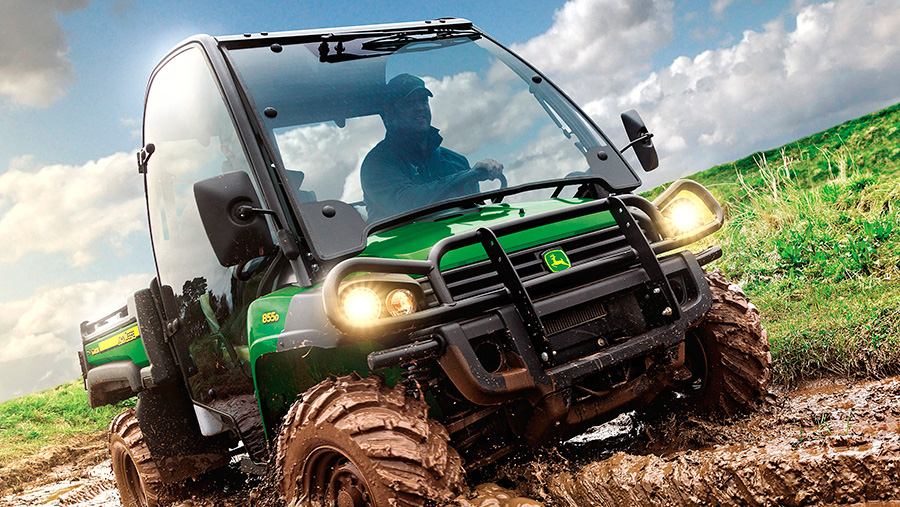 Farm buggies, once a rarity in the UK, are getting more and more popular as farmers and contractors enjoy the greater payload and passenger-carrying capacity they bring.

Next year will see a raft of new buggies on the market as manufacturers upgrade their existing models and introduce new ones.

First off is the new Kubota. Its RTV-X900 will replace the current RTV900, which is best known for its heavy-duty build and as the sole side-by-side with hydrostatic transmission.

Its replacement has the same power output – 22hp from an 898cc engine – but the transmission has been replaced with a slicker installation.

The engine’s coolant radiator is also 20% bigger than before and located up front along with the air intake.

Independent suspension is on all four corners of the chassis to give good ride quality with 205mm of wheel travel and ride height is adjustable at both ends to compensate for both heavy and light loading. Ground clearance is now 263mm.

In the driver’s compartment, a large digital screen positioned at the centre of dash provides essential information, including speed, hours and distance travelled, while hydrostatic steering should make the RTV-X900 easy to pilot.

A storage box set into the dash and storage compartments beneath the seats provide space to keep tools and other small items under control.

The back of the vehicle is dominated by a 0.43cu m steel cargo box with half-tonne capacity and either manual or hydraulic tipping to discharge rough loads.

Reco’s Kioti range is expanding with the introduction of two more Mechron variants for a range that currently includes the base 2200 and its 2210 road-legal spin-off.

The newcomers have a longer chassis, which is occupied on the Mechron 2230 by a longer tipping cargo deck with the same 500kg load capacity as the current machine, and on the 2240 by two rows of seats and a truncated 300kg capacity cargo box.

Otherwise, they are similar to the current Mechron and use a 1007cc engine to stump up 22hp of motive effort, which is channelled through a two-speed plus reverse auto transmission and selectable two- and four-wheel drive.

As anticipated when Polaris launched its high-performance XP900 side-by-side ATV with sprightly 50hp engine and a new, significantly improved chassis, the benefits of that vehicle’s development have filtered into the diesel-engined version.

As Polaris points out, the Ranger Diesel is a popular choice for a hard-working ATV among farmers and others thanks to the convenience of the fuel and capability of the vehicle as a whole. The Ranger Diesel Crew six-seater, meanwhile, has found favour with gamekeepers and shooting estates as an ATV with plenty of people capacity.

Both get a new three-cylinder engine of the same 24hp rating plus double alternator output providing 110 amps to power accessories.

A restyled cockpit, dual A-arm front suspension, flip-up cushions giving access to under-seat storage and a larger 37.6-litre fuel tank are among the practical upgrades provided by the new chassis.

The Pro-Fit cab system, which is said to be easy to install and remove, is available for both Ranger Diesel ATVs, with upgrades such as cargo bed interior liners, power windows and a tip-out glass windshield adding to equipment levels.

In contrast to these incoming new models, the New Holland Rustler is no longer available, as are the Linhai farm buggies that were branded Farr in the UK.

Although Farr is no longer in business, potential distributor Iain Falconer is trying to drum up support among Farr dealers for a fresh arrangement with the Chinese manufacturer, which he says has agreed to up its game in terms of parts support and warranty.

Mr Falconer is busy showing a 762cc Linhai LH800U diesel side-by-side ATV around the country, and hopes to start supplying the Perkins-engined machine by the middle of 2015.

With 400kg capacity in its rear load deck, the vehicle is at the smaller, lighter end of this class of vehicle suited primarily as a stockman’s runabout with some load-carrying ability.

Could 2015 be the year when Honda finally decides to bring its Pioneer farm buggy to the UK? It’s been in the US since 2013 and is made in South Carolina.

Two models are available stateside, a 500cc two-seat model and a 700cc model with two front seats and a second pair that cunningly fold up out of the load bay. Towing capacity is 700kg and it can carry 450kg.