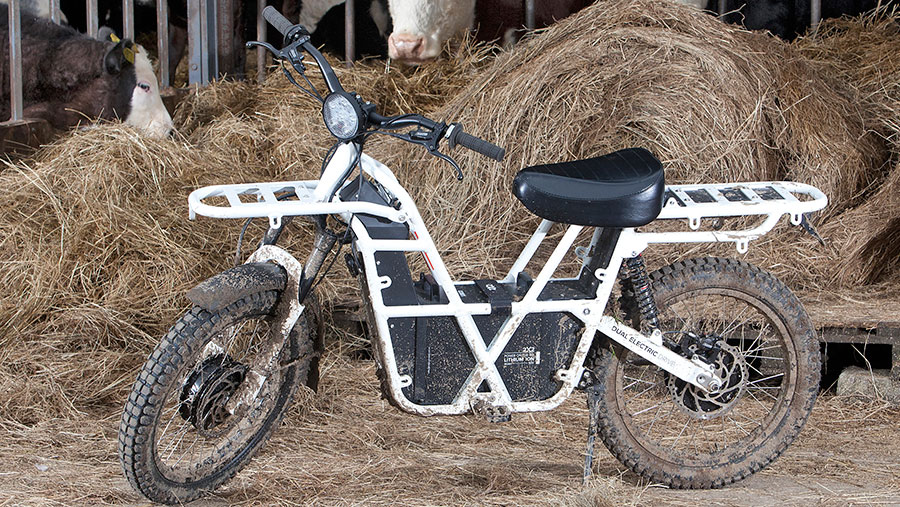 When it comes to on-farm transport, not much beats an ATV or a beaten-up pickup.

They are perfect load carriers and tough as nails, but also happen to be noisy, heavy and in some cases, rather clumsy.

So, step forward the Ubco – a lightweight bike that is bolted together in New Zealand and runs off pure battery power.

The principle is the same – two wheels, a twist throttle, seat and handlebars – but it’s far more fun than old-school petrol-power.

The brisk manner in which it takes off from a standstill comes as a shock no matter how regularly you ride it, and it stays near silent even at full chat.

There are no gears or clutch either, so with the throttle fully opened it will whisk its way up to a top speed of 30mph in less than 100m.

Riders can touch the ground with both feet, which also makes it easier to manhandle compared with anything carrying an engine.

That is particularly handy while bouncing across rough terrain or squeezing through gateways, and kick stands on either side mean it can be abandoned anywhere.

However, it is important to remember it’s not a motorcross scrambler. Wheelies and jumps will wreck the expensive motors stashed in the wheel hubs and pressure washing is a big no-no, too.

An aluminium main frame should provide better corrosive resistance than a standard steel set-up and helps trim a good few kilos off the total weight.

The battery sits between the driver’s legs along with an assortment of basic controls, a switch for the 18W LED headlight and various charging facilities, including two USB ports and a 12V socket for tools.

However, the best part is probably the seat, which is fabulously comfortable and worlds away from a solid bike saddle.

That is made all the more important because of the stiff mountain-bike-style suspension.

It is way too rigid for outright off-roading, with the 36mm forks up front offering 90mm travel and the pair of 32mm shocks at the back with a range of just over 100mm.

There are dials to tweak the rebound damping (how quickly the suspension re-extends after impact), but in practice it doesn’t make a huge amount of difference.

Ubco claims the 40aH, 50V lithium-ion lump will provide a range of up to 100km. In real life that’s a tad ambitious – farm work tends to be hard on machinery and we found off-roading sapped its energy much quicker.

Even so, it carries enough power to be out and about for a couple of hours and more life can be eked out of the battery by running in Steady Eddie eco mode, which limits the acceleration and speed (and fun).

However, there is a price to pay for the decent battery capacity. Flat-to-full charge times are between six and eight hours, which makes it an overnight job. 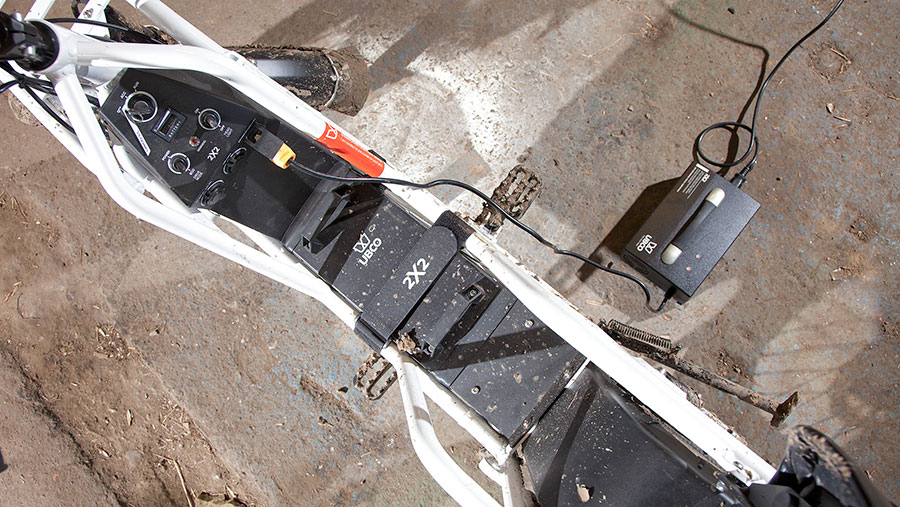 There are also two charging modes. Maximum brims the battery to 100% capacity for full range, but in doing so stresses the cells and will eventually harm its life expectancy. Normal mode tops it up just shy of full and is a safer bet for battery longevity.

It’s also worth noting that lithium-ion batteries don’t tend to suffer from the same charge memory problems as other types.

That means they can be topped up at any time, though Ubco still estimates that total capacity will drop from 100% to 70% over two years.

Power from the battery propels a pair of 1kW air-cooled, brushless wheel motors buried in the hubs.

These provide a combined torque of 90Nm and do away with the need for a clutch or complicated drivetrain.

It’s still pretty quick off the mark, but the upshot of having two driven wheels is more traction – particularly around corners where the backend is better behaved than on a highly-strung motorcross bike.

Braking is sharp and grip is generally good, though it gets bogged down more often than an ATV and could really do with fatter tyres for extra flotation through heavily poached gateways.

It helps to deflate the standard 2.75×17 rubber almost to flat, though that obviously has implications on battery life.

Mud and wet can also do damage to the electrical components. The battery and motor are protected to a certain extent, but crossing fords deeper than the wheel axles is out of the question.

How much can it carry?

The Ubco has been built with carrying capacity in mind, but it’s still no match for an ATV.

The removable front rack will carry 20kg and might be useful for fitting a small toolbox, while the rear frame is rated to 50kg.

Either way, they don’t want to be loaded too heavily – something like a slug pelleter would make the bike very top heavy and practically unrideable.

The frame is also peppered with lugs for fitting attachments. They are designed for a standard M8 bolt and have a square housing at the back to stop the nut spinning as it is tightened.

Where can I buy one?

The Ubco is imported by a firm called 50 Cycles based in Loughborough, Leicestershire. A road-ready version is coming soon, too.

Ubco’s electric bike is nippy and fun, but it’s difficult to think of a way to justify its juicy price tag.

For similar money you could pick up a fairly new Honda Foreman, which will last upwards of 15 years in the right hands and will still be worth a few quid at the end. An ATV also handles mud better than the Ubco and can carry far more, too.

However, if you have a few quid to burn and want to scoot around the farm in a civilised fashion then buy one. It’s great fun.