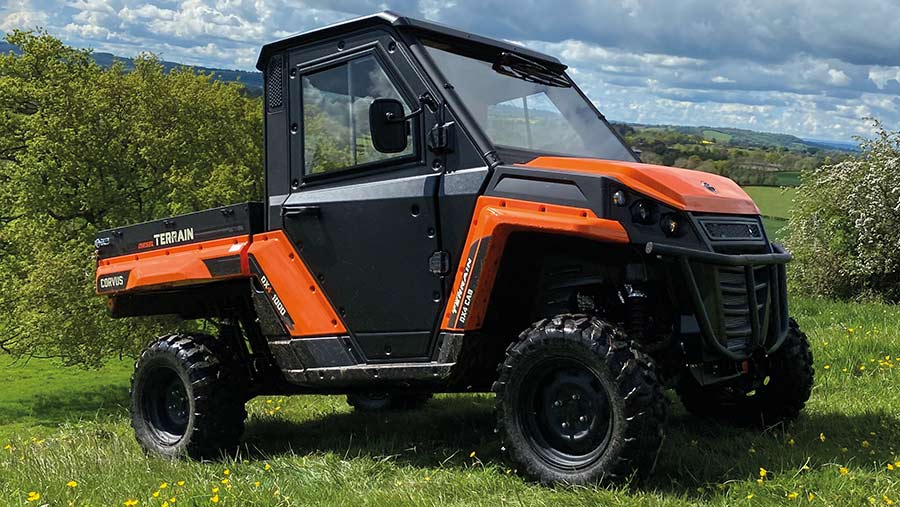 Corvus is the new kid on the block, launching its first utility vehicle in 2018 and dispatching it to the UK in 2019 via importer Boss ORV.

The Spanish brand was formed by parent company Tuxton, with a considerable amount of input from Yanmar, and the vehicles only feature engines from the latter. In North America, Corvus machines are actually sold in Yanmar branding, which indicates the level of co-operation between the firms.

Manufacturing takes place in Murcia, Spain, and the company says most of the components are sourced from within the EU. All Corvus UTVs are fully homologated from the factory to T1b tractor category, and are therefore road legal in the UK.

Our test vehicle was the latest-generation Terrain DX4 model, which has had a number of upgrades, including an improved turning circle and altered bonnet arrangement to ease access.

It also came in the highest of three spec levels, with a fully enclosed cab featuring blower fans and a heater. The only additional option is upgrading to the Clima version, which adds air conditioning.

Buyers get a choice of plastic body panels, including the zesty orange we were sent, or a more subtle khaki green colour scheme for those wishing to make less of a statement.

The firm has 17 dealers with a total of 20 outlets and is busy adding to the network. 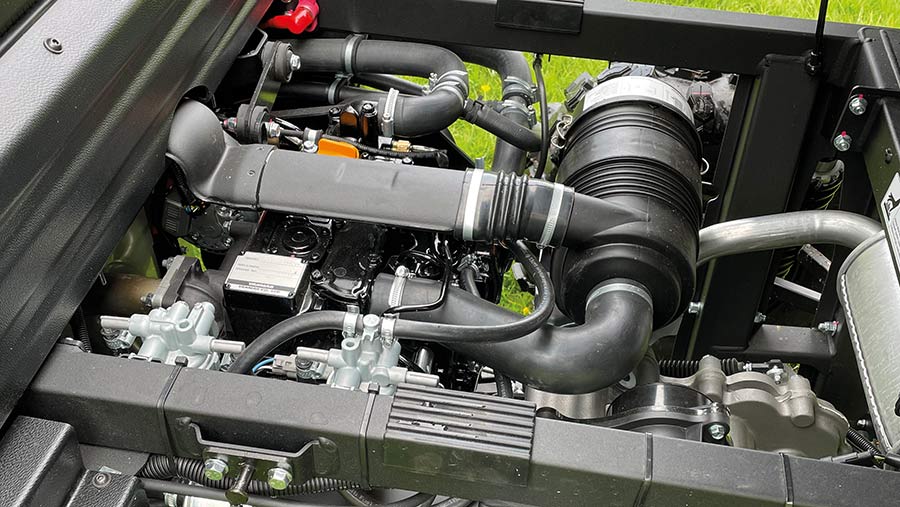 The Terrain is powered by a 993cc Yanmar engine that develops a healthy 24hp and 52Nm torque, which it sends to the wheels via a conventional two-speed, belt-type stepless transmission.

This is built by the firm in-house and is a little on the crude side, particularly compared with the system used by Polaris. For example, four-wheel drive has to be engaged at a standstill, which is tedious if you’re approaching a tough piece of terrain and want to flick it in quickly.

There is also no engine braking when lifting off the throttle, so drivers have to quickly get on the brakes when coming up to a junction, especially with a trailer in tow. When descending steep slopes, it is possible to keep some engine braking by opening the throttle enough to engage the drive belt, but it isn’t brilliant.

The flip side is that the Terrain does manage to get the power down efficiently, and during our hill climb towing test it was comfortably the quickest of the bunch, even though it didn’t have the most powerful engine.

As for the suspension, Corvus has fitted independent wishbones on all corners, with coils over shocks that give more than 250mm of travel.

We found these a little harsh on smaller bumps, but they did an admirable job of absorbing the bigger hits. The firm told us it was configured for working with heavy loads, so adjusting the dampers would undoubtedly help smooth out the ride. 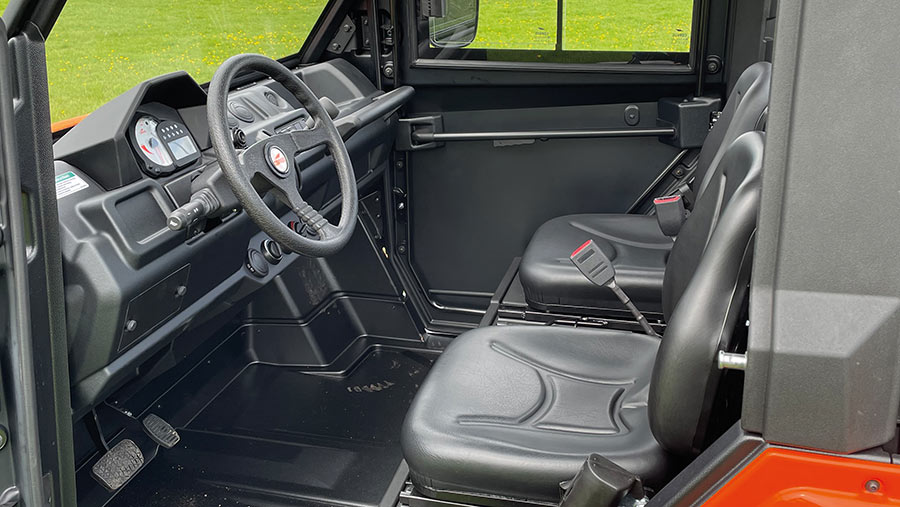 One of the feathers in the Terrain’s cap is the copious amount of space in the cabin; something that comes from being able to design a machine from scratch, rather than adapting an existing platform.

This means there is ample legroom for gangly drivers and passengers, both of whom get an adjustable seat to get them into a comfortable position. Sadly, there’s no bench seat option, but it might be available in the future.

Visibility is reasonable, thanks to a generous windscreen and rear window that drops right down to the load bed. The only downer is that it’s a little vulnerable to being clobbered, so the optional mesh protector would probably be a good idea.

As for storage, there is a series of large, sealed boxes under the seats which are best accessed once occupants have stepped out of the vehicle. There’s also a sizeable tub hidden under the bonnet, which is easy to get to, and handy cabinets can be added between the cab and the rear wheels.

The only disappointment is the lack of a glove box, which means there is nowhere to put items that passengers will want to access easily while driving.

Compare it with the competition, and the cab is a little on the agricultural side. The beauty of this is that it’s easy to hose out – there are actually drainage slots in the floor – but it means it lacks creature comforts.

There is precious little padding to insulate occupants from the engine noise and, with an irritating rattle emanating from the back of the cabin, it wasn’t the most relaxing place to sit.

Interestingly, cabin noise was lower than some others on the decibel meter, but to the testers’ ears it did seem the loudest. This could be remedied with a bit of well-placed sound-deadening material and hopefully it will be available on later models.

Ventilation is also poor on a piping hot day­, with the only fresh air coming from dash vents and some basic sliding side windows. All of the other vehicles tested had a dual-stage opening windscreen, which is a good, simple means of keeping cool in machines like these with enclosed cabs.

Air conditioning is available, but the firm says an opening screen will appear shortly on the options list, which will be considerably cheaper. It’s also handy for those who want to use the vehicle for shooting. 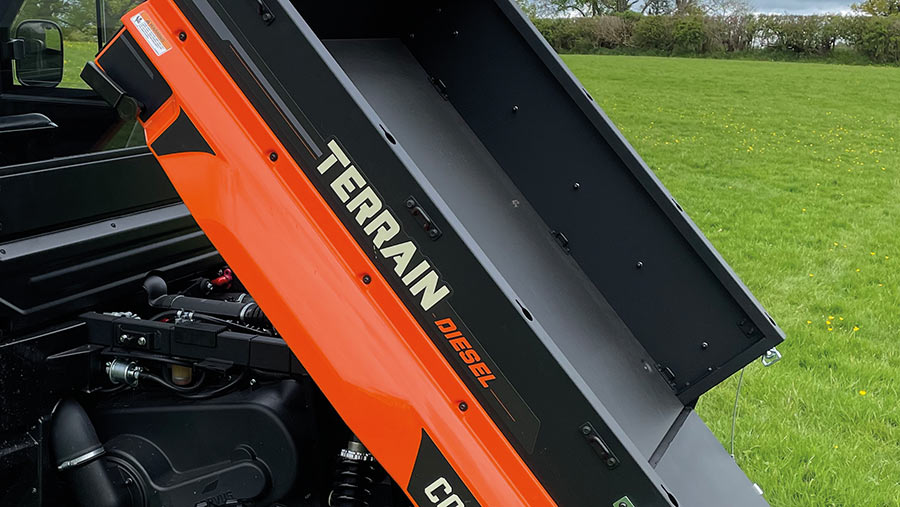 The tin tub on the back of the Terrain is comfortably the longest of the load beds in our test group, giving ample storage and the ability to carry a 4ft round bale.

With a painted finish, it does seem vulnerable to knocks and scrapes, so would benefit from the addition of some sort of liner. Our model had a well-weighted manual tip with a single release lever, but an electric ram is an option.

The load platform was the highest in our test, making it slightly more difficult to throw stuff in. However, it means there’s plenty of room underneath for the engine and transmission. Tilting the bed gives good access to all the components and it looks pretty straightforward to work on.

Although the Corvus has the longest wheelbase in our test group, the turning circle was comparable to the others. This is something the firm has worked hard to improve, as the original version needed a tractor-like 11m area to perform a full turn.

Corvus has swept in with a machine that offers decent towing ability, a large load bed and a roomy cabin with ample storage. The interior finish is definitely at the utility end of the spectrum, with rattling plastic panels and a slightly unpolished transmission. However, we think the firm has a solid platform to build from.

Price as tested: £18,199
Best for: Load and storage space
Worst for: Cabin ventilation