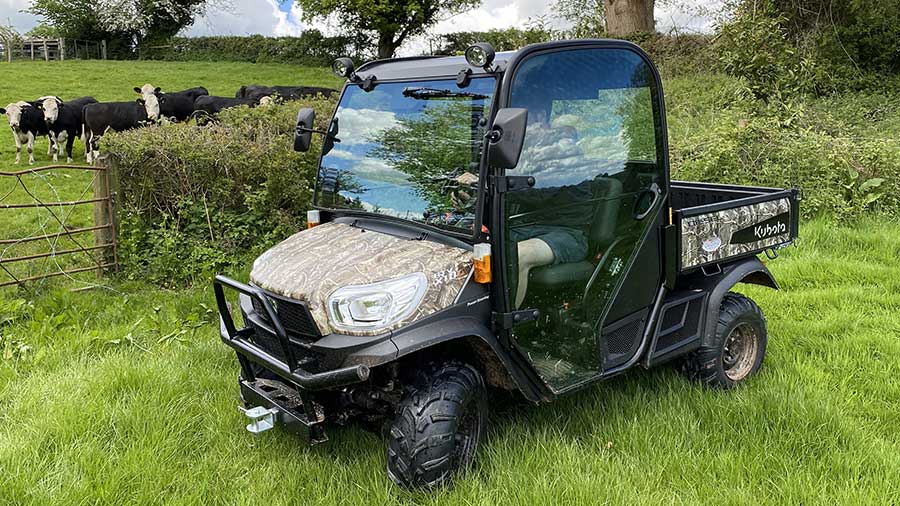 Kubota is a long-established name in the UTV world, having started selling its machines into the agricultural market back in the mid-noughties.

Originally, the Japanese firm produced buggies for golf courses and equine units, but since 2006, the RTV has built a reputation as a dependable and stable (if a little steady) workhorse, popular with growers and gamekeepers alike.

Its current generation RTV first appeared in 2015 and shares plenty of components with Kubota’s compact tractors – albeit rearranged to fit in a different frame. Inevitably this has limited its design to a certain extent.

The RTV-X 1110 was launched three years ago and now sits alongside the four-seater 1140 model.

Kubota’s amenity roots might suggest that the RTV is less suited to farm work than some of its competition, but a bomb-proof engine, hydrostatic transmission and panoramic cab offer some decent perks. Let-downs include sluggish acceleration and a low-rated towing capacity.

At 1,123cc, the RTV packed the biggest engine of our test fleet – the three-cylinder block replaced the 898cc engine that is still used in the Polaris Ranger – but this failed to deliver the best performance.

The biggest difference compared with the other three UTVs is Kubota’s hydrostatic transmission, which is essentially the same unit it uses in its compact tractors.

Though it has its limitations, there are some perks to running an alternative to the traditional belt drive. 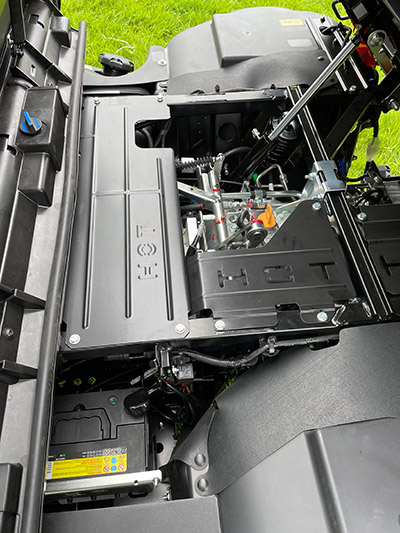 For starters, it’s quick to react and takes off as soon as boot hits throttle, while the others need substantial engine revs to engage the belts.

For pootling around the yard, the Kubota was easily the slickest operator and smooth throttle movements were helpful when backing up to trailers and getting snug with buildings.

It also hangs on remarkably well when climbing hills, though it certainly won’t win any awards for speed.

And the ability to stop and start again without touching the brakes will be a big tick in the box for those farming livestock on hillsides.

The lack of belts means there is no chance of slippage when up against a tough ascent, either.

It can come down slopes sedately, too, and kept things calm in our downhill test, where it was only outshone by the Polaris.

This is partly down to the “dynamic brake assist” on the 1110, which retains the hydraulic pressure in the gearbox, thus allowing the drive system to control the deceleration of the machine.

It makes it easier to control braking when towing a trailer on slopes and also means there is no need to have the engine whizzing to keep the drive engaged downhill.

However, it’s not all good news, as there is a serious lack of usable power compared to the belt-driven buggies.

On the road, speed drops away sharply at the first sight of a hill and things get even steadier when towing. It clocked a laborious 5:41mins on our hill climb test and, at times, we could probably have walked quicker.

Other niggles included slightly unresponsive steering at speed, an unremarkable turning circle and the occasional sticking of the gear selector that required a hefty shove to move it to another position. The positive is that it’s nicely gated – unlike the Gator and Ranger.

A car-like bonnet latch and hinged opening has been retained from older models to offer the best radiator and washer bottle access out of our test group. 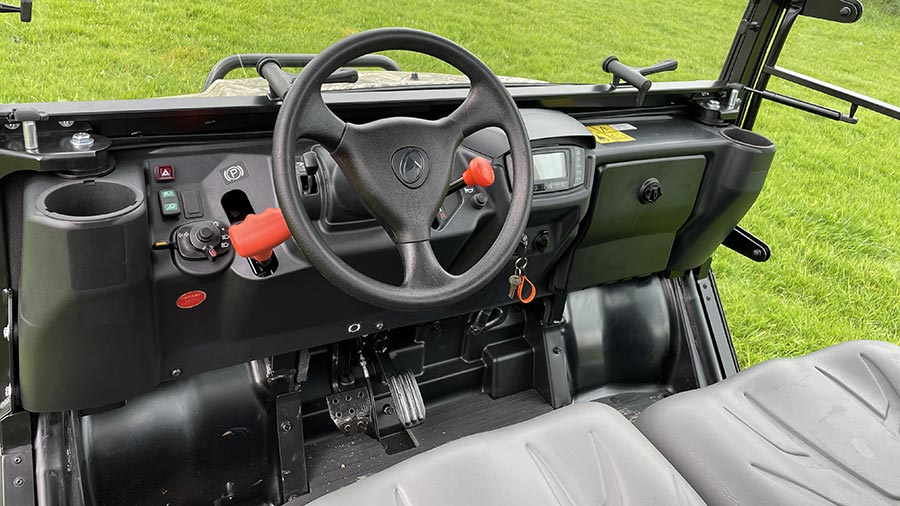 Kubota doesn’t make its cabs in-house, instead sourcing them through Austrian company Mauser.

The design is heavy on glass compared with its rivals, with great views all around helped by the full-length glazed doors on either side and pencil-thin pillars on each corner.

Although the doors are great, there are a couple of drawbacks, and their vulnerability tops the list.

It is only a matter of time before the driver will be surreptitiously reaching for the dustpan and parts book after swinging them open against a wall or other immovable object.

The only access to fresh air is through the front window, which can be chocked slightly open or swung up through 90deg.

There is a heater, but no air conditioning.

For taller drivers, the cab roofline feels low, and the heater box/windscreen wiper mechanism protrudes marginally into the eyeline, sometimes requiring taller drivers to hunch down for a full view forwards.

A rudimentary screen delivers speed readout and warnings and there’s a foot-operated diff-lock. The ride-on mower-style indicator and light cluster are a bit fiddly compared with the car-like stalk on the Polaris.

There is a lack of decent storage pockets in the cab, too, with the deep glove box and two cup holders the only accessible offerings.

The passenger seat is marginally bigger than the driver’s – a 40:60 split – so two passengers will have to be very friendly to be comfortable doubling up. Sadly, there’s nio bench-seat option. 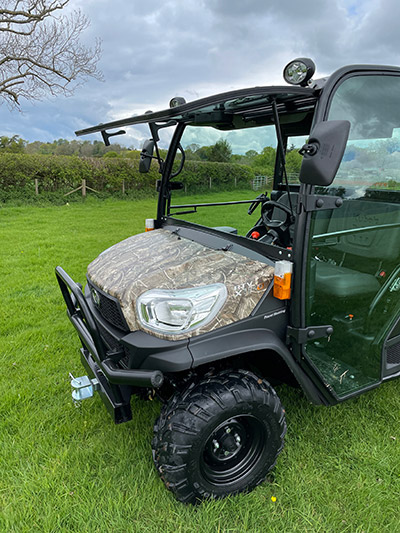 A paltry 500kg is all it can officially muster in the towing department, though we reckon it could feasibly lug a little more – albeit at the expense of speed.

All the others on test can haul around the 1,000kg mark, so the Kubota is well off target here.

Ground clearance is where the Kubota’s turf origins come home to roost again. It was the lowest of the lot, at just 252mm – the nearest competitor was the Gator at 289mm – but full belly protection helps offset some of those shortcomings.

It’s also stunted by just 205mm suspension travel all round, which, coupled with the rigid load-bearing chassis, explains why the RTV doesn’t soften the bumps as well as some of the others. 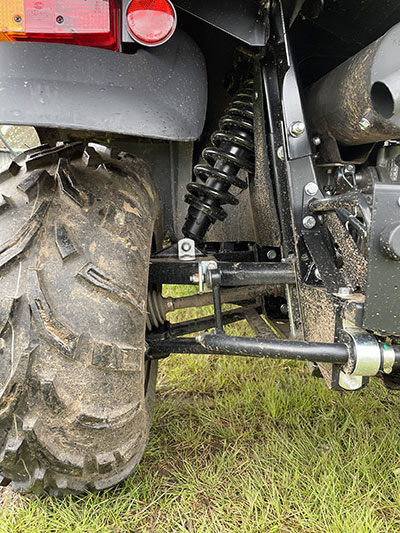 The bed covers the rear wheels well and there are good rear and front mudguards to protect the cab from flying debris.

This is probably helped by having the same-size tyres all round – 25×10 R12s – but they may hinder performance when navigating ruts, where wider rears help bite into the tracks left by the front wheels.

There is a plastic load bed liner and the rubber-covered tie-down points seem a nice idea to keep dirt and grime out.

The solid tailgate and latches have remained the same for over a decade now and Kubota buyers get a powerful hydraulic tipper as standard. 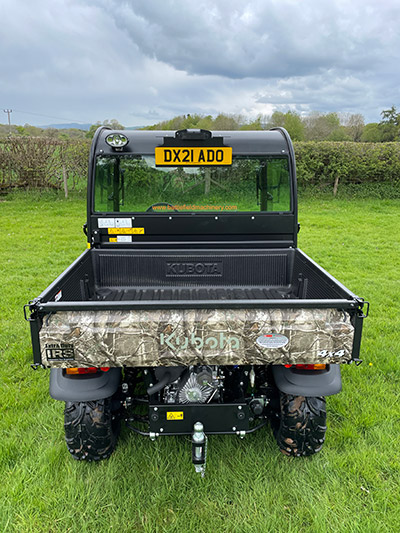 Rear lights are neatly tucked away underneath the bed and there is a solid nudge bar at the front.

The option to have spools for attachments such as road sweepers or small log splitters will be a big attraction for some users regularly working away from yards.